For Kurdish Smugglers, Iran Sanctions Are Starting to Bite

The kolbars brave subfreezing temperatures and border guards’ bullets to carry heavy loads over the mountains in an unemployment-plagued region that Iran’s government has all but forgotten.

KUH-E TAKHT MOUNTAIN, Iran—Seen from the road, they look like dots on the snow-covered mountainside. Rows of men crossing the border from Iraq into Iran at almost 10,000 feet, carrying up to 150 pounds of goods on their shoulders. After a four-hour march, they entrust their loads—in exchange for about $10 to $25 per person—to a group of pickup truck drivers, ready to bring them to the nearby city of Marivan and, from there, to the rest of Iran.

These kolbars (literally “those who carry on their back”) are smugglers from Iranian Kurdistan who cross into Iraqi Kurdistan, collect goods, and bring them back to Iran, defying the harsh environmental conditions and border guards’ bullets. The growing difficulties they face in doing this work are an emblem of how tensions between Washington and Tehran have affected daily life in one of Iran’s poorest regions.

The border that the kolbars cross has been closely watched by Iran’s Islamic Revolutionary Guard Corps for years, but surveillance has intensified after the reintroduction of U.S. sanctions against the Iranian regime. On the one hand, Tehran fears the infiltration of militants belonging to Kurdish-Iranian groups exiled to Iraq—such as the Kurdish Democratic Party of Iran and the Kurdistan Free Life Party—which call for armed insurrection against the central government and are considered a threat to Iranian security forces. On the other hand, the United States, in an attempt to further isolate Iran, is moving to seal the porous border, blocking both legal trade and smuggling. It’s a flow of money that, according to Rebaz Hamlan, the finance minister of the Kurdistan Regional Government of Iraq, is worth $8 billion a year. 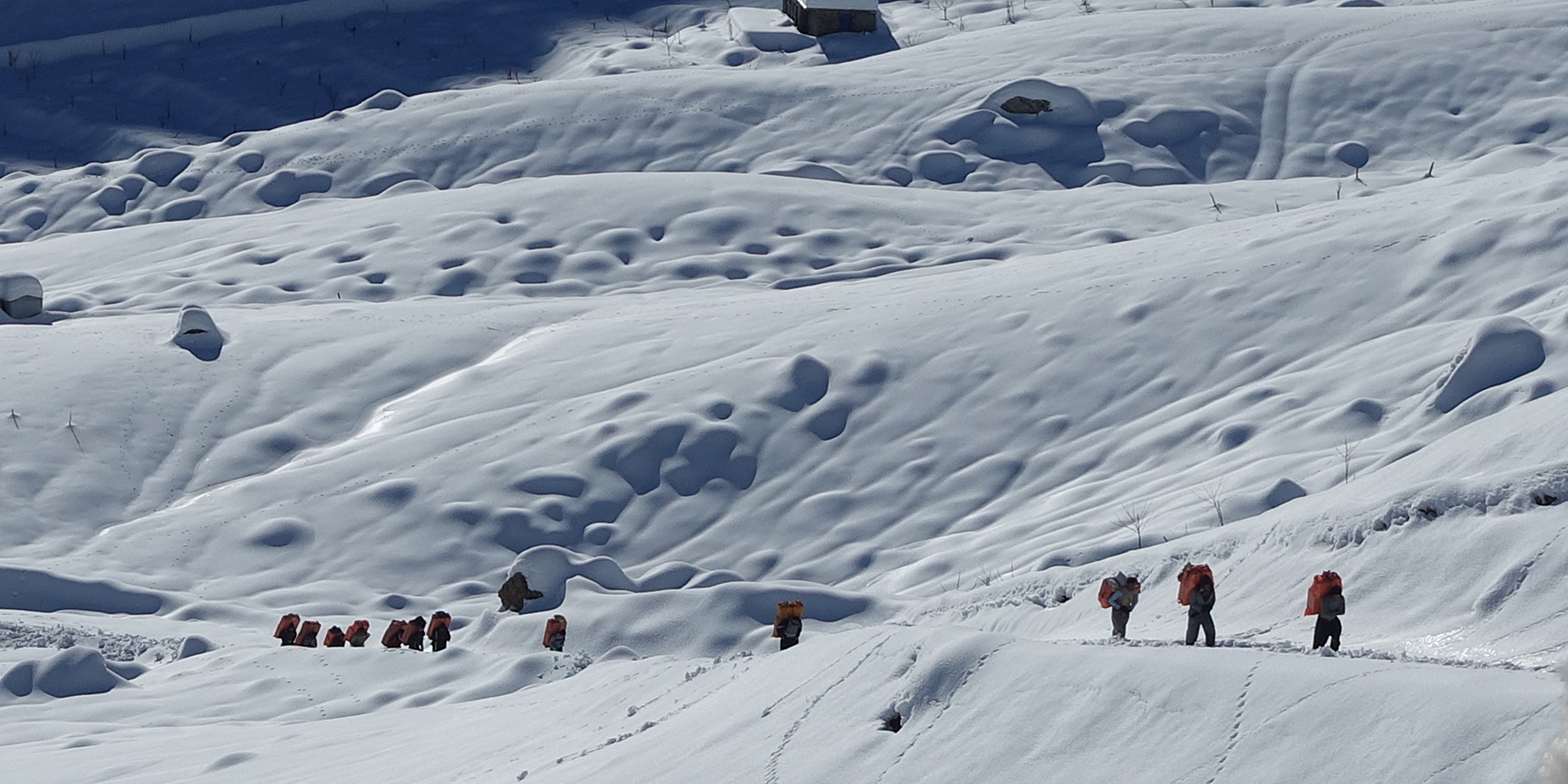 A line of kolbars dots the snowy landscape as they traverse the rugged border region from Iraq to Iran on Dec. 12, 2018. (Sergio Colombo and Andrea Prada Bianchi for Foreign Policy)

The U.S. attempt to tighten the grip on the border involves the Peshmerga, the military forces of the Kurdistan Regional Government, who have exclusive control over goods and people on the Iraqi side. Washington’s recent activity was confirmed by Walter Posch of the Austrian National Defense Academy. According to Posch, who is based in Iraqi Kurdistan, the United States’ priority, as well as that of the new U.S. consul general in Erbil, Steven Fagin, has become the containment of Iran: “The aim of the U.S. is to intensify economic isolation of Tehran and, at the same time, pass the message that the influence of the Islamic Republic in Iraqi Kurdistan is diminishing.”

In December 2018, a month after the imposition of the second tranche of U.S. sanctions on Iran, the crackdown began affecting the activities of around 400 kolbars who in winter climb the treacherous peaks of the Kuh-e Takht mountain, 40 miles from Marivan, often in over 3 feet of snow. According to various witnesses and sources, the Peshmerga, who monitor the Iraqi side of the border, have radically changed their behavior toward the kolbars, following the instructions of Masoud Barzani, the leader of the Kurdistan Democratic Party and former president of the regional government who still pulls the strings there.

Among the pickup trucks awaiting the smugglers’ return, a man lamented the unusual obstruction he encountered at the border. “I already paid for my goods,” Farzad said, “mainly cigarettes and clothes.” Farzad drove from the village of Sarvabad, where he lives, ready to load the smuggled goods on his truck and bring them to Marivan. “But the Iraqi guards aren’t letting them through,” he said as he nervously checked his watch marking noon. The wait dragged on for hours. Anxiety crept through the bystanders. Only at around 5 p.m. did the first silhouettes of the kolbars peek out from the ridge. Farzad covered his face with his hands, relieved, and looked out toward the trail of men as they twisted and turned down the steep walls of Kuh-e Takht. Some carried the goods wrapped in orange plastic bags on their backs; others, exhausted by the strain, used them as a sled to descend the rock-scattered slope.

Reaching the pickup truck, a kolbar named Rahim entrusted the load of Milano-brand cigarettes to Farzad and pocketed the equivalent of $13: “The Peshmerga didn’t want to take the goods through,” he said, gesturing broadly, “more and more often they stop us from working or force us to take the longer and more dangerous routes.” Rahim is 49 and has been working as a kolbar for two years. He lives in Marivan with his wife and two sons. Every day, he starts his journey at the foot of the Kuh-e Takht mountain, a 50-minute drive from home. “We start walking at dawn and, when the snow is as thick as it is now, we don’t make it back before 3 p.m.” he said in between sips of Fanta. “For the most part we transport cigarettes and clothes but also alcohol and home appliances like televisions or washing machines. During the summer months, the strongest men can carry up to 90 kilos [200 pounds] of goods, without earning more than $25 a day. This job isn’t only exhausting, it can also cost you your life.” 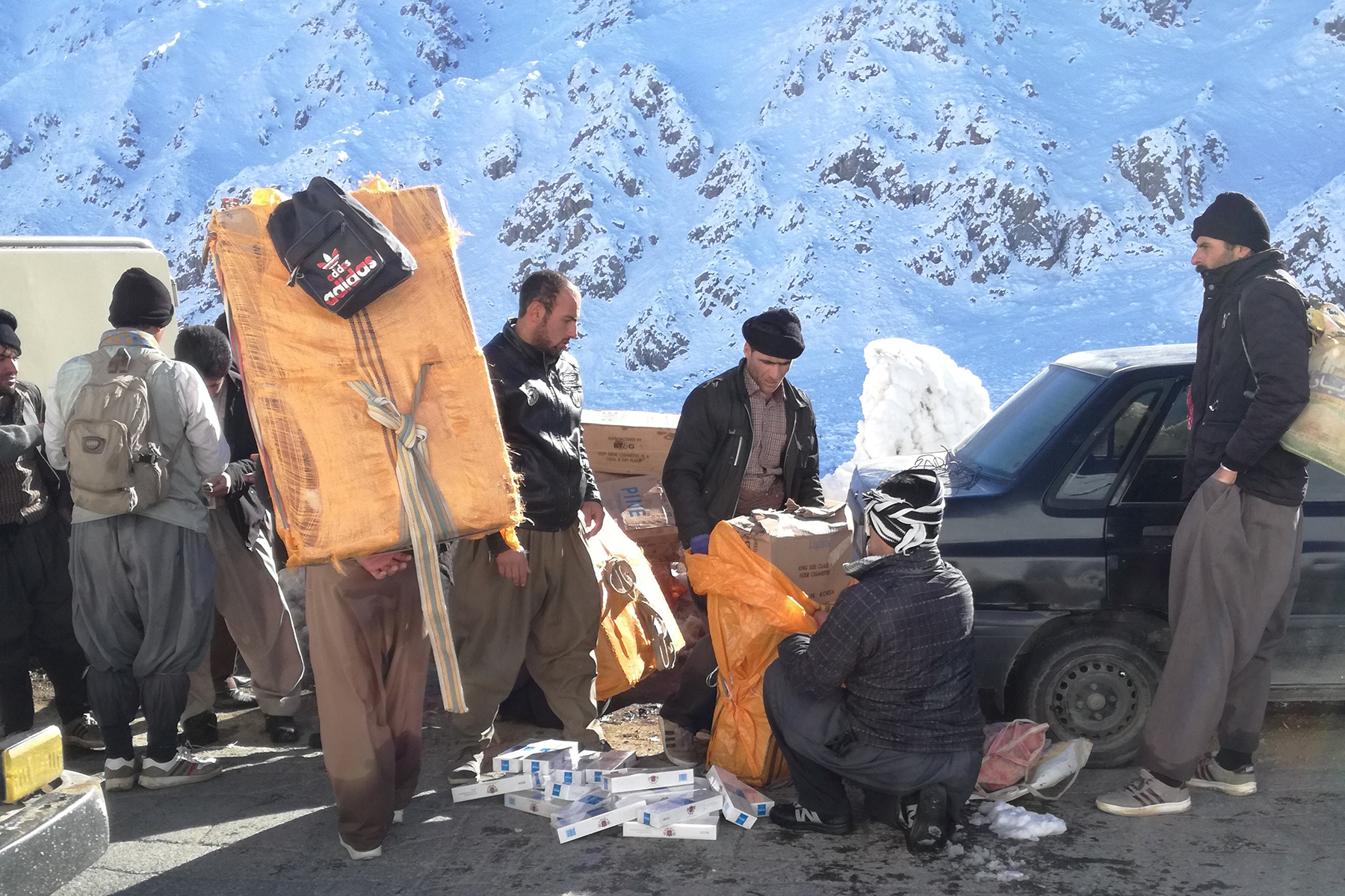 Kolbars stop to transfer their smuggled goods to pickup trucks that will bring them to the nearby city of Marivan and, from there, to the rest of Iran, on Dec. 12, 2018. (Sergio Colombo and Andrea Prada Bianchi for Foreign Policy)

Over the course of 2018, Iranian border guards killed 48 smugglers and left 104 injured, according to Iran Human Rights Monitor. Furthermore, every year dozens of deaths are caused by accidents in the harsh mountain conditions—mainly hypothermia and land mines dating back to the Iran-Iraq War, which, three decades later, still claim victims. “A few days ago,” recounted Karwan, a 25-year-old kolbar, “a friend of mine was shot in cold blood by an Iranian soldier. Another time, two agents intercepted us on our trip back and stole all our contraband cigarettes.”

As he spoke, Karwan pointed to a building that dominates the entire valley. It’s the border guard police station from which soldiers can observe the smugglers’ whole journey on the Iranian side of the mountain—opening fire every so often to reassert their authority. “We engage in an illegal activity that is only partly tolerated,” the young man explained, “hence, when the army wants to remind us who’s in control, they start shooting. It’s a way to remind us that we work only because they allow us to. We risk our lives constantly, yet for many it’s a way to earn some money.”

According to official Iranian government data, three of the country’s four majority-Kurdish provinces have higher than average unemployment. The province of Kermanshah registered the highest in the country: 21.6 percent. Together, these four provinces with approximately 7.5 million inhabitants (nearly 10 percent of the country’s population) contribute a mere 5.2 percent of Iran’s GDP. This precarious economic situation is what drives nearly 20,000 people per year to become smugglers, according to unofficial reports by local media. “There are 20-year-old kolbars just as commonly as there are 70-year-old ones,” Rahim explained. “When the weather conditions are favorable there can be as many as three or four thousand people crossing the border.” 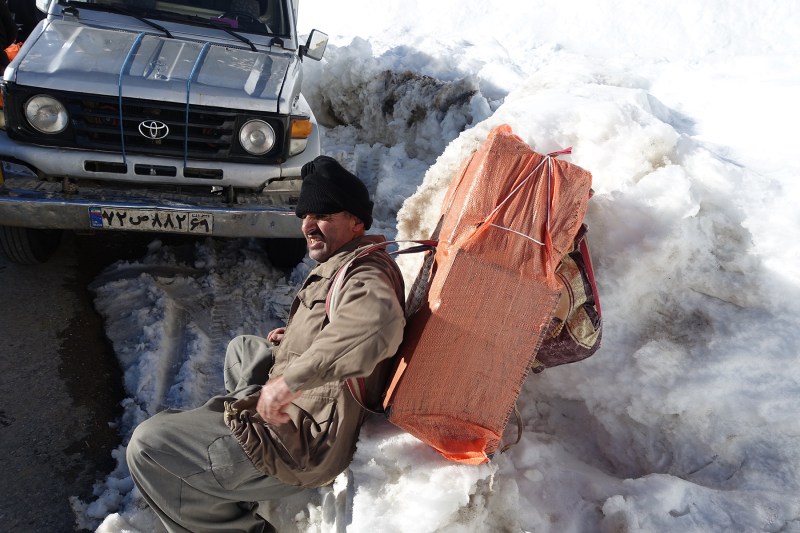 Kolbars carry mostly cigarettes and clothes, but also alcohol, on their trip through the mountainous region between Iraq and Iran on Dec. 12, 2018. When there’s no snow, they also carry home appliances such as televisions or washing machines. (Sergio Colombo and Andrea Prada Bianchi for Foreign Policy)

The relationship between Kurdistan and the central government has had a long history of turmoil. The region’s minorities were marginalized by Ayatollah Ruhollah Khomeini just as much as by the Pahlavi dynasty. Prior to and during the Islamic Revolution of 1979, Kurds supported Khomeini in his campaign against Shah Mohammad Reza Pahlavi, but once in power, he rejected their request for more autonomy. For the last four decades, all Iranian presidents have ignored the region’s need for integration and investment, with the exception of the reformist Mohammad Khatami. Even the current president, Hassan Rouhani, hasn’t lived up to Kurdish expectations, especially as their votes contributed to his victory in the 2013 as well as 2017 elections.

Six years ago, the then-reformist candidate promised to “remove the stain of … inequality” from the minority regions. He vowed to integrate them into the country’s economic and cultural structure, giving them a greater access to central power. This never happened, Rahim said: “There was a time when Rouhani was very popular here. He talked about restoring the region … and we trusted him.”

As the last pickup trucks drove toward Marivan, nothing remained in the snow except fragments of orange plastic. “The truth,” Rahim concluded, “is that nothing has changed. Tehran has abandoned these lands.”

Sergio Colombo is a Milan-based journalist. His work has appeared in Il Foglio, Panorama and Lettera43.it. Twitter: @sergio_colombo

Andrea Prada Bianchi is a journalist in Milan. His work has appeared in Lettera43.it and Linkiesta.it. Twitter: @apradabianchi