In 1951, Chester Bowles, the former governor of Connecticut, asked U.S. President Harry Truman if he could serve as his ambassador to India. The president was shocked. “I thought India was pretty jammed with poor people and cows wandering around the streets, witch doctors and people sitting on hot coals and bathing in the Ganges and so on,” Truman said, “but I did not realize that anyone thought it was important.”

Almost seven decades later, India and South Asia more broadly have never mattered more to the United States. India—the world’s largest democracy and its seventh-biggest economy—has emerged as a close U.S. partner, helping to balance against a rising China. But it remains embroiled in a long-simmering dispute with its nuclear-armed neighbor, Pakistan, America’s closest military ally in South Asia for the past half-century. And it’s a conflict that has escalated dangerously in the last two weeks: India’s Prime Minister Narendra Modi has pledged to “avenge every tear” after Jaish-e-Mohammed, a Pakistan-based terrorist group, claimed responsibility for a car bomb that killed 44 Indian paramilitary police officers in Kashmir. Then there’s Afghanistan, where, after 17 years of fighting and more than 2,400 dead Americans, the Taliban holds more territory than at any time since the U.S. invasion. “A region once deemed peripheral to US global interests,” writes Srinath Raghavan in Fierce Enigmas, his sweeping new history of the United States in South Asia, “is now the site of the most prolonged application of American military power in the republic’s history.”

Raghavan, a senior fellow at Carnegie India in New Delhi, traces America’s engagement with India, Pakistan, and Afghanistan from the arrival of the first American ship in Pondicherry in 1784 to the Trump administration’s threats to suspend military aid to Pakistan. It is a comprehensive account—one that ultimately reflects poorly on several generations of U.S. policymakers, whose short-sighted decisions, especially with regard to the dysfunctional U.S.-Pakistani relationship, have too often left a destructive legacy in their wake. 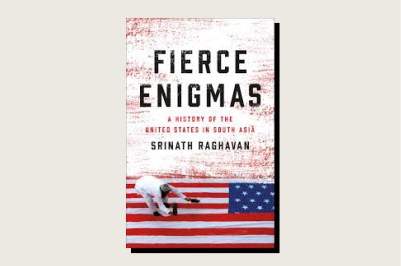 Raghavan’s story begins with the traders and missionaries who, for much of the republic’s early history, were the primary source of U.S. engagement with the subcontinent. The former searched for profits; the latter were inspired by some combination of faith, racial condescension, and a genuine, if paternalistic, desire to do good works. Raghavan has an eye for the memorable anecdote. In 1795, for example, the first elephant was brought from India to the United States. “The greatest natural curiosity ever presented to the curious,” the Columbian Museum of Boston proclaimed, before warning that “the Elephant having destroyed many papers of consequence, it is recommended to visitors not to come with such papers.”

Raghavan is careful not to portray the relationship between the United States and the subcontinent as one-directional. Ralph Waldo Emerson and Henry David Thoreau immersed themselves in Hindu religious texts; Mahatma Gandhi was deeply influenced by Thoreau’s “On the Duty of Civil Disobedience”; Martin Luther King Jr., in turn, was inspired by Gandhi. And as Americans set sail for India in search of profits and souls, Indians also began to arrive in the United States. By 1900, 2,031 Indians had legal permanent residence status, mostly in California. As that number began to rise, it prompted a nativist backlash. The “Hindoo invasion is yet in its infancy,” warned one newspaper. “Only the head of the long procession has entered the Golden Gate.” In 1923, the Supreme Court ruled that immigrants from India were not eligible for naturalization as U.S. citizens because an Indian could not qualify as a “free white person.” The following year, the Immigration Act shut the door on Indian immigration.

The U.S. government, meanwhile, showed little strategic interest in South Asia until the outbreak of World War II and, above all, the Cold War. India, to Washington’s frustration, refused to side with either the United States or the Soviet Union, a stance a 1948 State Department memo described as “indicative of [India’s] political and international immaturity and feeling of self-righteousness.”

Pakistan, however, faced with a larger, more powerful, and fiercely hostile neighbor and lacking funds for the army it had inherited after partition, turned to the United States. “America needs Pakistan more than Pakistan needs America,” Pakistan’s founder, Muhammad Ali Jinnah, insisted in 1947. “Pakistan is the pivot of the world.” Although initially unconvinced, in 1954 the U.S. government agreed to provide Pakistan with military assistance—the first of a series of short-sighted decisions that it would later come to regret. By the end of President Dwight D. Eisenhower’s first term, it had become clear that Pakistan could do little to help in the struggle against the Soviet Union. The United States, for its part, was “doing nothing for Pakistan except in the form of military aid,” Eisenhower complained. “This was perhaps the worst kind of a plan and decision we could have made. It was a terrible error, but we now seem hopelessly involved in it.”

Just over a decade later, the Nixon administration also pinned its hopes on Pakistan, using it as a back channel to lay the groundwork for Nixon’s visit to China. But Pakistan’s help came at a terrible moral cost for the United States. In 1971, Pakistan’s military dictatorship launched a devastating crackdown on a rebellion in what was then East Pakistan and is now Bangladesh, killing at least 300,000 Bengalis and forcing some 10 million people to flee to India. Nixon and his secretary of state, Henry Kissinger, sided with the Pakistani generals, funneling them American weapons and military supplies to use against their own people.

This was not the last of the U.S. government’s misguided decisions. After the Soviet invasion of Afghanistan in 1979, U.S. intelligence agencies used Pakistan to help fund and supply Islamist militants who were sent across the border to fight the Russians. Afghanistan soon became a training ground for jihadis, while the Pakistani military continued to back various Islamist groups, including the Afghan Taliban. “We expected post-Soviet Afghanistan to be ugly,” former CIA Director Robert Gates wrote in 1996, “but never considered that it would become a haven for terrorists operating worldwide.” After the U.S. invasion in 2001, Washington poured billions of dollars into the coffers of the Pakistani military, even as Pakistani intelligence agencies continued to back the Taliban.

Throughout, Raghavan shows how American policymakers were often guided not only by geopolitical considerations but also by cultural preconceptions. Most early American travelers to the subcontinent were appalled by Hinduism, with its hierarchical social practices and its elaborate rituals, and much more sympathetic to Islam, a monotheistic religion that they found easier to understand. Stereotypes of feminine, spiritual Hindus and martial, virile Muslims continued to shape U.S. policies toward India and Pakistan well into the 20th century. A 1952 State Department memo argued that Islam “presents a more effective deterrent to the acceptance of communist doctrines than Hinduism.” “The only Asians who can really fight are the Pakistanis,” argued Secretary of State John Foster Dulles. “That’s why we need them in the alliance.” For the Nixon administration, the Pakistanis were “honorable” and the Indians “devious,” “a slippery, treacherous people,” who, Nixon told Kissinger in the Oval Office, deserved a “mass famine.”

Today, Washington faces a series of dilemmas in the region, many of which involve balancing short-term imperatives—working closely with Pakistan while extricating U.S. troops from Afghanistan, for example—with longer-term strategic interests, such as the American tilt toward India. As Raghavan’s book makes clear, these sorts of tradeoffs are not new. He offers few answers, but American policymakers would do well to learn from his account of the historical record.

Ultimately, Raghavan points out, for all of Washington’s errors, most of the political problems the region faces are not of American making and include “deep-seated conflicts of identity, power balances, antagonistic political cultures, flawed institutional structures, and the absence of any impulse toward regional economic integration.” Those problems are here to stay; managing them will require more wisdom than American policymakers have tended to show in the region that Bill Clinton and Barack Obama both dubbed “the most dangerous place in the world.”

Sam Winter-Levy is a Ph.D. candidate in politics at Princeton University. Twitter: @SamWinterLevy

Studies suggest heightened risks from pollution are common in major cities in Bangladesh, India, and Pakistan.

Economic woes are giving the alliance legs, but overturning a military-backed prime minister is a hard proposition.