How to Cheat at Xi Jinping Thought

A newly mandatory app is eating up Chinese workers’ time—so they’re finding ways around it.

A study app named 学习强国 (Xuexi Qiangguo) was released by the Publicity Department of the Central Committee of the Communist Party of China on Jan. 1. Since the third character, 强, can be used as either a verb or an adjective, the name can be read either as “Study the Great Country” or “Study Makes the Country Great.” So far, it has racked up more than 17 million downloads in the Huawei App Store and is the number one app in the Apple App Store.

This isn’t a spontaneous demonstration of enthusiasm. According to official announcements and documents, employees of the government and state-owned enterprises, particularly party members, have been “encouraged” to download and use the app. Study and quizzes of dogma have always been part of life for China’s party members—but the app puts their dedication on display for everybody to see via publicly available leaderboards. As the app’s slogan says, quoting Communist Party General Secretary Xi Jinping, “Dream starts from study, career starts from practice.”

A Feb. 15 screenshot from the Chinese Communist Party website with a headline about President Xi Jinping’s meeting with Robert Lighthizer and Steven Mnuchin. (Foreign Policy illustration)

That’s left less technically adept officials in a pickle. Over Spring Festival earlier this month, many reportedly asked their kids to help them download and answer questions so they could rank up on the leaderboard. And like leveling guides for video games, there are plenty of popular articles online guiding busy officials on how to earn points most efficiently. Tech-savvy users have even attempted to develop some “aimbot” programs to earn points automatically and top the leaderboard, but the app prevents that by giving points only if users spend a certain amount of time on each section.

The origin of the app has some obvious parallels to Cultural Revolution-era drives to study Mao Zedong’s Little Red Book. For example, the first two characters of the app’s logo are written in Mao’s calligraphic style. Mao once encouraged youths to study hard and make progress every day, while Xi has highlighted several times the importance of study in a digital era of media.

Users log in with their phone numbers—which are connected to their national ID cards in China—and then connect through DingTalk, Alibaba’s answer to Slack, for instant connection to their office mates. Once logged in, every form of study is recorded, quantified, and rewarded by the system. As with Chinese smartphone video games, there are numerous tweaks and incentives, like daily login bonuses, subscriptions, and the ability to redeem points for virtual gifts. Ironically, while the party has criticized the likes of Tencent for making addictive games, it seems perfectly happy putting the dark arts of these so-called freemium products to use for propaganda purposes. 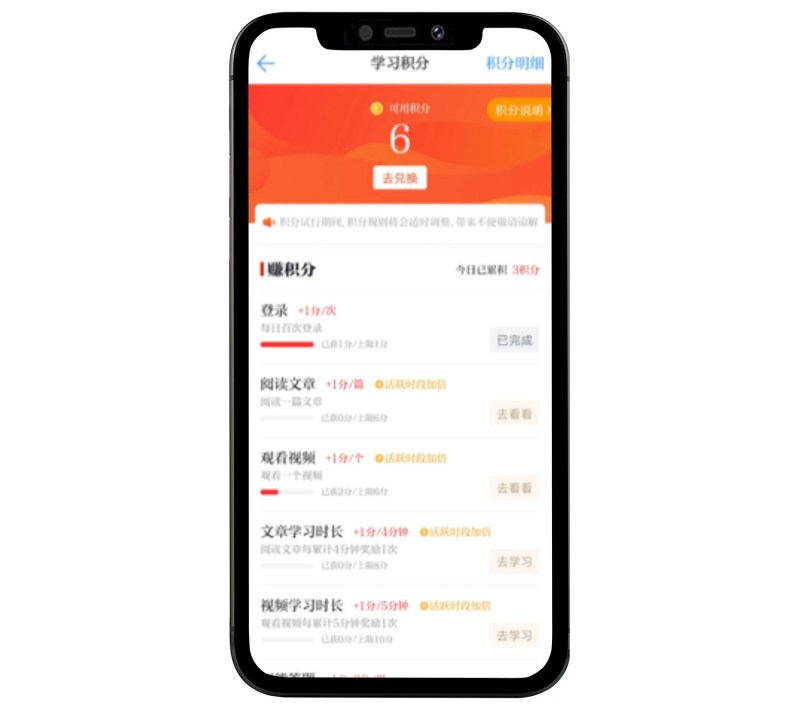 Scores within the app are broken down into different categories, such as taking quizzes and watching videos, each with a ceiling on how many points can be earned. (Foreign Policy illustration)

Quizzes are a major part of this app—daily and weekly tests featuring multiple-choice and fill-in-the-blank questions ranging from the benignly cultural to reinforcement of Xi’s personality cult. For example:

Central to the app is a leaderboard where users’ past performance is put on display relative to their coworkers’. The ranking, which updates on a daily basis, shows every user’s real name, their past seven days’ score, and their lifetime score. The pressure that accompanies Chinese students, whose class rankings are publicly available, has now expanded into the office.

A leaderboard inside the app shows a list of companies detailing the number of users from each firm and their average score. (Foreign Policy illustration)

But the attraction of the app isn’t just its mandatory display of party loyalty. The app was developed in collaboration with the Chinese tech giant Alibaba. Besides strict propaganda functionality, this app is decked out with an array of Alibaba-enabled goodies, such as copious cloud storage space and the inclusion of DingTalk, Alibaba’s chat service. For Alibaba, this isn’t just a convenient way to demonstrate its allegiance to the party as it has done several times in the past—co-founder Jack Ma once said in an interview that Alibaba is a state company and he’d turn Alipay over to the state if needed. It’s also a potential business move targeting competitors. For instance, Alipay, Alibaba’s payment app, which has been losing market share to the more popular WeChat Pay, is incorporated into Xuexi Qiangguo’s system. Users can give each other money in the app by connecting their Alipay accounts.

As a result, the overall quality and polish of the app far exceed what Chinese app users have come to expect from a government-produced product. “I can’t believe it is produced by a government institution. It is so beautiful and fancy,” one user commented. Reuters recently reported that Alibaba contributed significant engineering and product management talent in return for permission to integrate its services.

There’s also a very practical need for the app. Mandatory tests—with extremely fixed answers learned by rote—are common throughout even private Chinese companies. Demonstration of ideologically correct knowledge is vital for public service examinations, while even non-party members working in sensitive jobs such as reporting need to know what the correct line is on issues. “Today I study hard and know many pieces of news that I should know. I always waste my time on the phone, but today on this app feels meaningful,” commented one user. “I don’t need to search official documents from every organization, because this app has it all,” noted Wu Qiurong, another user. Apart from party theory, the app also offers free online courses on subjects such as Python and C++.

But getting around the system is also a time-honored tradition in China, and Xuexi Qiangguo users are already deploying tricks they have developed on other platforms. The Chinese taxi-hailing app DiDi, for example, has a big data-based credit system to score their drivers, but drivers have used hundreds of phones to make fake orders and artificially increase their rating. Last November, fans were accused of using bots to boost the Canadian-Chinese singer Kris Wu’s album to seize seven out of the top eight spots on the U.S. iTunes chart, even blocking Ariana Grande’s hit “Thank You, Next” from the No. 1 slot.

Even before the iPhone age, Chinese officials regularly outsourced their ideological obligations, including by using pre-written “self-criticisms” and having themselves edited into photos of inspection visits rather than actually making them. Today, many users find studying on the app is too time-consuming, so they just let the videos play on mute to rack up their points or look for score-earning guidance online. Others lean on relatives or subordinates. “I had to do all the tests for several seniors of my family. Made for a pretty fun Spring Festival,” one young man lamented.

In a Baidu forum dedicated to the app, users are stressed out because they are asked to hit a certain level of credits every day. “It is good for more people to familiarize themselves with the development of the country, but when users are required to get credits at a specific level every day it turns out to be a somewhat formulaic burden,” complained some users. “Does this app only allow positive comments?” asked a user who noticed snippets from app reviews, “Or are those comments fabricated by machines?”

Biden wants to focus on China. That’s a gift to Putin.

Philip Spence is a pseudonym for a Beijing-based freelance journalist.

Biden wants to focus on China. That’s a gift to Putin.