Washington helped start an epidemic of violence against women in Central America. Now it’s washing its hands of the problem.

SAN SALVADOR, El Salvador—When police finally found Joselyn Milena Abarca, her body had been cut up into seven pieces and dumped across San Salvador. The 26-year-old had been a psychology major in college and a rising star in her job. She recently bought a house and a car.

But her boyfriend, Rónald Urbina, treated her like a possession. She had to ask for permission to cut her hair; he had previously tried to suffocate her to death. Rónald was subsequently arrested and charged with murdering Joselyn. (He denies all charges.)

His increasingly violent and controlling behavior, however, was allowed to fester for the 10 years they were together without any legal repercussions. That’s sadly common in a country that often dismisses crimes against women. Homicides of women in El Salvador have more than doubled since 2013 to 468 in 2017, according to the Institute of Forensic Medicine. The violence is destabilizing the country and is considered a major push factor in driving up migration to the United States. Women currently make up 27 percent of all migrants apprehended at the U.S.-Mexico border, according to U.S. Customs and Border Protection statistics.

But while Salvadoran women’s rights advocates are trying to curb the violence and tackle the misogyny, the United States is undercutting those very efforts. The Trump administration is pulling funding from programs that support women in El Salvador and focusing funding and energy on a border wall to keep them and others out. Women seeking asylum based on domestic violence claims are now being rejected. In 2018, the United States committed only $600,000 to anti-violence programs, which was 1 percent of its aid budget to El Salvador.

To get a sense of how small that is, consider that at the height of the Salvadoran civil war in the 1980s, the United States was spending $1 million to $2 million a day on military and aid. The legacy of that war, and Washington’s direct role in fueling it, normalized the culture of violence that women suffer from today, many say. “[We] haven’t been taught [how] to live in harmony or in peace,” the criminologist Ricardo Sosa explained in a BBC interview. “We prioritize violence as a way to resolve conflicts.”

The Trump administration’s weak efforts to protect women are not only wrong—they’re also shortsighted. The United States should consider violence against women a national security threat and factor it into programs and policies aimed toward stabilizing international affairs. It’s the right move for El Salvador and a smart one for U.S. policy if it really wants to ease the migrant issue.

“Violence is a profound, complex issue—you’re not going fix it overnight,” explained Celina de Sola, the co-founder of Glasswing, a nongovernmental organization that works in vulnerable communities in El Salvador. “But when you consistently invest in prevention work at a community level, you start to build structures around young people.”

There’s a lot to support. Salvadoran women and men have made huge strides in recent years to meet rising rates of violence against women head-on. In 2011, the government passed a new law called “For a Life Free of Violence Against Women,” which punished all forms of violence against women, ranging from murders to mockery. More recently, in 2017, six courts were developed with aid from the United States to deal with violent crimes against women, including assault and sex crimes; judges for these courts have been trained against biased behavior, like asking about the way a victim was dressed. And in 2018, the Attorney General’s Office launched a new women’s unit to help tackle violence against women. It’s headed up by a woman, Ana Graciela Sagastume, who is now chief prosecutor on all female homicide cases across El Salvador. 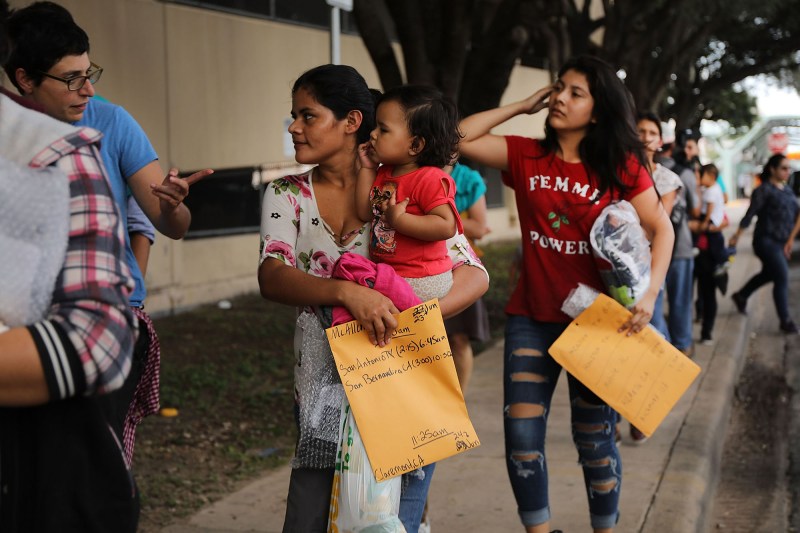 Volunteers help walk dozens of women and their children, many fleeing poverty and violence in Honduras, Guatamala, and El Salvador, to a relief center following their release from Customs and Border Protection in McAllen, Texas, on June 22, 2018. (Spencer Platt/Getty Images)

Although these represent positive steps, the underlying problems are endemic. The judicial system is overworked and poorly funded. Only 3 percent of court cases involving violence against women ended in guilty verdicts between 2016 and 2017. Impunity is rife.

The United States shares blame for the violence against women in El Salvador. It was the U.S.-supported civil war in the late 1970s and ’80s, in which rape was weaponized as a war tactic by militaries, that has left a legacy of violence against women. What began as the Salvadoran civil war expanded into a proxy war between the United States and Russia, in which Washington was fueling government-led militias and death squads with up to $2 million a day in aid and weapons.

There has never been a reconciliation process that addressed the sexual violence women endured. But the United States has funded anti-violence efforts. Since 2013, U.S Agency for International Development funding has supported a Victims’ Assistance Center, which serves more than 300 women each year. Thirty-six victim assistance centers now exist throughout the country, as well as a Crisis Center for Sexual Abuse in San Vicente. The aid has also supported temporary shelters, equipment to collect evidence in sexual crimes, and efforts to reduce re-victimization.

Why the Pentagon Remains a Battlefield for Women

A woman was passed over to lead the Pentagon—but it’s the entire country that’s missing out.

Donald Trump isn’t the only right-wing populist to govern with aggression—and do surprisingly well with women.

Isolated in Rural Nigeria—and Waiting for America to Vote

Across much of the world—including one remote Nigerian village—the availability of family planning will largely depend on the outcome of the U.S. presidential election.

Washington is now threatening to cut such funding. This past fall, President Donald Trump promised to end U.S. government aid to Guatemala, Honduras, and El Salvador in response to the migrant caravan. “We will now begin cutting off, or substantially reducing, the massive foreign aid routinely given,” he tweeted. At that point, however, U.S. funding had already fallen significantly. For fiscal year 2017, the amount dedicated to El Salvador was $88 million—a figure that dropped nearly 50 percent just one year later. Of that, $2.3 million was for gender-based violence, which is only about 3 percent. For fiscal year 2018, El Salvador was promised $46 million in foreign assistance, of which about $600,000 (about 1 percent) was dedicated to gender-based violence. Less than $1 million, in a country with the highest rate of female homicide in Latin America, and the third-highest in the world.

Activists say one thing is clear: Slashing foreign assistance is detrimental to the work being done. “The U.S. should increase aid to the region for community-based programs that have a track record of successfully reducing crime and violence,” said Cindy Huang, the co-director of the Center for Global Development’s program on migration, displacement, and humanitarian policy. “Unlike billions for a wall, aid is a smart and cost-effective investment that will improve the security of Central Americans and the broader region.”

Some nonprofits use U.S. funding to do work specifically intended to keep people from migrating. Glasswing International’s Club for Returnees, funded through private donations and USAID, works with young women who have returned from Mexico or the United States. The organization provides trauma support, financial assistance, and referral care support. “We’ve seen real transformations take place,” de Sola said. “These women and girls are already resilient. They’re surviving every day—we just develop their skills. The more you provide them with opportunity to thrive in this context, the better they do.” Glasswing also runs clubs to equip young girls with the skills they need to navigate the daily risks they face. After one year of involvement in these clubs, nine in 10 girls could recognize signs of gender-based violence, including behaviors previously normalized, like pushing and yelling, and knew how to report it.

While there is no quick answer to El Salvador’s problem with violence against women, the United States can make a big difference by supporting anti-violence programs, Huang said, both through development assistance and diplomatic outreach. “So many threats today are transnational, from gangs to human trafficking,” she said. “They require collaboration and joint investment with other government, civil society, and private sector partners. Unfortunately, the Trump administration and other governments are dismissing lessons from the past.”

Efforts to improve violence in El Salvador won’t just help victims, but survivors, too. Joselyn’s mother, Yesenia Juárez, is still grieving her daughter’s death, but she is also spending her time creating a foundation. Set up in memory of Joselyn, the aim is to help prevent further female homicides. From schools to public institutions, she wants to ensure help is available and accessible to any Salvadoran women who need it. “I need to talk about this pain,” she said. “I have to make sure this doesn’t happen again.”

Louise Donovan is a Nairobi-based correspondent with the Fuller Project.

Why the Pentagon Remains a Battlefield for Women

A woman was passed over to lead the Pentagon—but it’s the entire country that’s missing out.

Donald Trump isn’t the only right-wing populist to govern with aggression—and do surprisingly well with women.

Isolated in Rural Nigeria—and Waiting for America to Vote

Across much of the world—including one remote Nigerian village—the availability of family planning will largely depend on the outcome of the U.S. presidential election.