Advocates for gender equality in Latin America are making gains, but an epidemic of violence overshadows their progress.

On this International Women’s Day, Latin Americans should take stock. Despite important progress, the region still has much to protest.

On this International Women’s Day, Latin Americans should take stock. Despite important progress, the region still has much to protest.

To be sure, there are some laudable advances toward gender equality. For one, there have been considerable efforts to close the political participation gap. Gender parity laws in Bolivia, Ecuador, Mexico, Costa Rica, and Nicaragua have created admirably equitable gender distributions in their respective parliaments. Further, though all four of Latin America’s most recent female presidents are no longer in power, nearly a third of the region currently has female vice presidents. Women gained seven more seats in Costa Rica’s parliament of 57 representatives in last year’s elections, and there are already three experienced female candidates in Guatemala’s upcoming presidential race.

With political participation, political and legal rights have also expanded. Brazil, Ecuador, Mexico, Peru, and Uruguay have passed laws to curb sexual and gender-based violence. Chile passed a law in November 2018 making it easier to facilitate legal gender changes, in part because of critical acclaim of the Chilean movie Una Mujer Fantástica, which starred the transgender actress Daniela Vega and narrated a love story between a transgender woman and a cisgender man. It was a small but significant step forward given that three-quarters of all reported murders of transgender people are in Latin America and the murder rate of trans people is higher than that of the general population.

Equal access to education, health care, and social security has improved throughout the region, and women are quickly outnumbering men in schools. Indeed, Latin America and the Caribbean, according to the World Economic Forum’s 2018 Global Gender Gap report, is one of the world’s fastest-improving regions.

Unfortunately, achievements in education have failed to carry over into the labor market. Only one in four private businesses claims a single woman on its board of directors in Latin America. The world average, by contrast, is 40 percent. Latin American women earn 75 cents for every dollar their male counterparts make. Furthermore, four out of five employed women work in what are known as “low-productivity jobs,” which pay less and are less likely to involve technology or innovation. The majority of women’s work across the region also remains unpaid and relegated to the informal and care sectors, even though several initiatives across the region such as the girls-only Technovation competition in Mexico, the U.S.-Mexico Foundation’s STEM mentoring program, and the Laboratoria coding boot camp in Peru have tried to increase women’s participation in the science, technology, engineering, and math sectors.

But most concerning of all is continued gender-based violence in the region. A third of women and girls over 15 in Latin America have suffered from sexual violence. The perpetuation of cultures of impunity, machismo, corruption, and nepotism, as well as challenging legal infrastructures throughout the region, normalize gender-based violence and make it difficult to hold aggressors accountable.

Women in Latin America are more likely to be killed than anywhere else in the world. Femicide numbers are consistently the largest in the world. What does that mean in real numbers? Annually, some 60,000 Latin American women are murdered. Honduras and El Salvador have the highest rates of femicide in the world, with 10 and 14 deaths respectively for every 100,000 women. More often than not, these murders go unpunished: Only two out of every 100 cases of femicide in the region go to court. In Brazil, home to nearly half of the femicides in Latin America in this year alone, activists fear more women will die with the relaxation of gun laws under the new president, Jair Bolsonaro.

Reproductive rights, as well, remain a hope, not a reality. The region has the second-highest number of teenage pregnancies in the world. One in four girls is married or in an early union before the age of 18. Over 24 million women of reproductive age in Latin America do not have access to safe contraception methods due to a lack of sexual education and access to family planning. Further, countries across the region maintain some of the most draconian abortion laws in the world, particularly affecting young women, women living in poverty, and women with low education levels. Abortion is only legal in Cuba, French Guyana, Guyana, and Uruguay, and Mexico City, while in other parts of the region so-called therapeutic abortion is only allowed in case it risks the mother’s life or health and, in some cases, in the event of rape or incest. In El Salvador, the Dominican Republic, Haiti, Honduras, Nicaragua, and Suriname, abortion is prohibited under all circumstances. At least 10 percent of the region’s maternal deaths are due to unsafe abortions, according to the Guttmacher Institute, a research group that supports abortion rights.

Recent events have underscored the dangers of these antediluvian laws. In August 2018, Argentina’s legislature narrowly failed to decriminalize abortion. And then in late February, many in the country were shocked by a widely publicized case of an 11-year-old who was barred from getting an abortion after she was raped by her grandmother’s companion. The delay of her case meant the child was forced to undergo a cesarean section at 23 weeks. Protesters took to the streets on her behalf. Recently, both Mexico and El Salvador freed women convicted of homicide because they had miscarriages and delivered stillborn babies. In country after country, lack of access to contraception and rampant levels of sexual violence against girls further propel teenage pregnancy and child marriage rates.

In addition to areas needing improvement, there are new threats to progress in gender equality. Evangelical Christianity and social conservatism are on the rise. Evangelical groups used misinformation to sabotage the Colombian peace process by convincing numerous voters that the peace agreement promoted abortion, even though the word never appeared in the document. Brazil’s Bolsonaro has denounced the presence of “Marxist rubbish,” political debate, and “gender ideology” on Brazil’s school campuses. Militants opposing so-called gender ideology throughout Latin America erroneously argue that teaching sexual education attracts young people toward homosexuality, feminizes boys, and masculinizes girls. In addition to jeopardizing sexual education for decades to come, this rhetoric normalizes intolerance of LGBT Latin Americans, who are especially vulnerable to violence, further endangering them in the region. 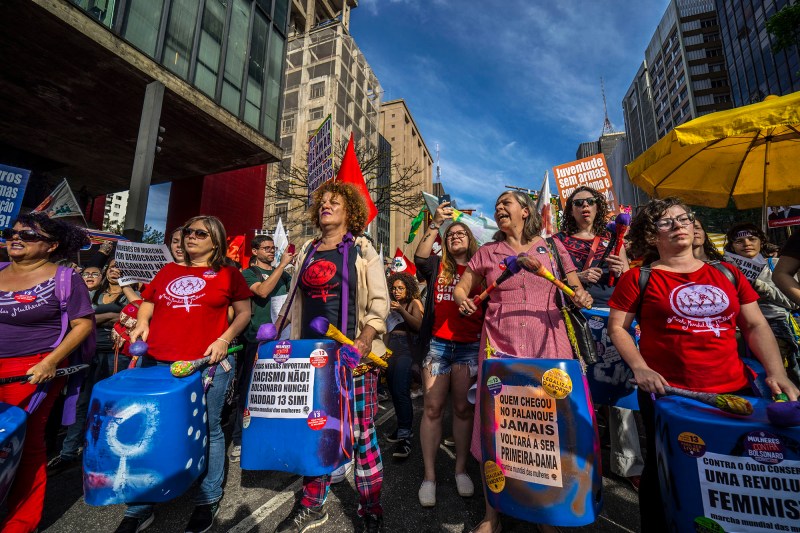 The trend isn’t good. The political mainstream in Latin America is likely to see more candidates like Bolsonaro. Last year, Costa Rica almost elected Fabricio Alvarado, a Christian musician-slash-politician in a wave of backlash against the legalization of same-sex marriage. Argentina’s answer to the Brazilian president, hard-right Congressman Alfredo Olmedo, was the only one to vote against a bill to reduce gender-based violence in the Argentine legislature. While he is currently considered a fringe presidential candidate for this year’s elections, that may not be a case for long as this sort of character becomes more common in the region.

It’s certainly not all despair, though. Despite all of these developments, Latin America has a vibrant and active women’s movement, which has led protests against femicide and limitations on abortion under the banners including #NiUnaMenos (Not One [Death] More), #Cuéntalo (Speak Out), and #AbortoLegalYa (Legal Abortion Now).

Though Latin America has taken some time to catch up with the #MeToo movement, a few women in the entertainment world have begun to point out their abusers publically. A famous Brazilian healer who was accused by hundreds of women of assault has gone to jail. Issues such as assault during Carnival in Brazil have been met by a vibrant “no means no” campaign across the country, and activists are organizing against sexual harassment and assault from Argentina to Mexico.

Most notably, the region’s highest-profile #MeToo case is currently unfolding. One of the previously most renowned politicians in the region, the former Costa Rican president and Nobel laureate Óscar Arias, was brought to court by Alexandra Arce von Herold, an anti-nuclear activist, for sexual assault on Feb. 4. Since then, he has been accused by an additional eight women, including Human Rights Watch’s director, a former Miss Costa Rica beauty queen, and several journalists, of sexual harassment or assault. The development of this case will be crucial in the region: If Arias is found guilty and held accountable for his actions, this could help dispel the lingering culture of impunity for sexual assault in the region.

In Latin America, hard-earned gains in gender equality face threats from deeply entrenched inequality and intensifying backlash from the fringe right. Advancing gender equality is a priority for Latin American women. Nevertheless, clearly, this progress is incomplete, as the push toward gender equality on the streets has yet to be reflected in politics.

Stockholm should continue actively pursuing a foreign-policy agenda focused on gender equality. And the world should follow.

A year after the country decriminalized domestic violence, women feel the consequences.

Natalia Cote-Muñoz serves as the research associate for Latin America Studies at the Council on Foreign Relations. She was selected as one of four Latin Americans in the inaugural class of China and Latin America Young Scholars for the Inter-American Dialogue. Twitter: @ncotemunoz

Stockholm should continue actively pursuing a foreign-policy agenda focused on gender equality. And the world should follow.

A year after the country decriminalized domestic violence, women feel the consequences.