The Flame of Feminism Is Alive in Iran

While Western activists defend the right of Muslims to wear the veil, Iranian women are fighting for a bigger cause: choice.

The revolution that swept through Iran 40 years ago ruptured all diplomatic ties between Iran and the United States. This we know all too well. But another bond, one between Iranian feminists and their American counterparts, was also ruptured, which, unlike the other, occurred in virtual anonymity.

The revolution that swept through Iran 40 years ago ruptured all diplomatic ties between Iran and the United States. This we know all too well. But another bond, one between Iranian feminists and their American counterparts, was also ruptured, which, unlike the other, occurred in virtual anonymity.

In March 1979, days after Ayatollah Ruhollah Khomeini rose to power, the American feminist icon Kate Millett traveled to Tehran. On March 8, Millett looped arms with fellow women demonstrators to protest against Khomeini’s proposal to reinstitute a mandatory dress code for women, the hijab. If there were a moment that could stand for a perfect microcosm of all that was right about Iran then—and for all that was about to go wrong—it was that moment in March. Veiled women, alongside unveiled women, were throwing their fists into the air, demanding gender equality. When reporters asked the veiled women what they were protesting, since they themselves wore the veil, they unanimously said they objected to the eradication of choice. These women wanted the next generation to have more freedom than theirs did. A reporter asked Millett what she thought of Khomeini. She cast an unflinching look into the camera and said she believed Khomeini was a “male chauvinist.” These were the euphoric post-revolutionary days when most people revered the ayatollah; those who did not knew to keep silent. It was no surprise when Millett was subsequently arrested and expelled—an experience that she later recalled as the most terrifying of her life.

Forty years on, Iranian women—still on the streets making the very same demands—have turned into Tehran’s most indomitable opposition. Young and old, veiled and unveiled, they are staging the boldest acts of civil disobedience the nation has seen since the heady days of 1978. Last year, dozens of unveiled women mounted benches throughout the country and waved white scarves in peaceful defiance of the mandatory dress code laws. Peeling off their headscarves, girls walk on the streets filming themselves and their confrontations with busybodies and morality police. When two such women were arrested in Tehran and forced into a security van to be taken into detention, crowds surrounded the vehicle, took the door off its hinges, and set them free. What is taking place in Iran today can best be described as a rebellious sequel to the suffragettes to gain the right to dress just as their predecessors had helped women get the right to vote. Millett saw this trend decades ago, when she presciently said, “All the things we have fought for since the commencement of the women’s movement in 1847 are in great jeopardy in this society.” 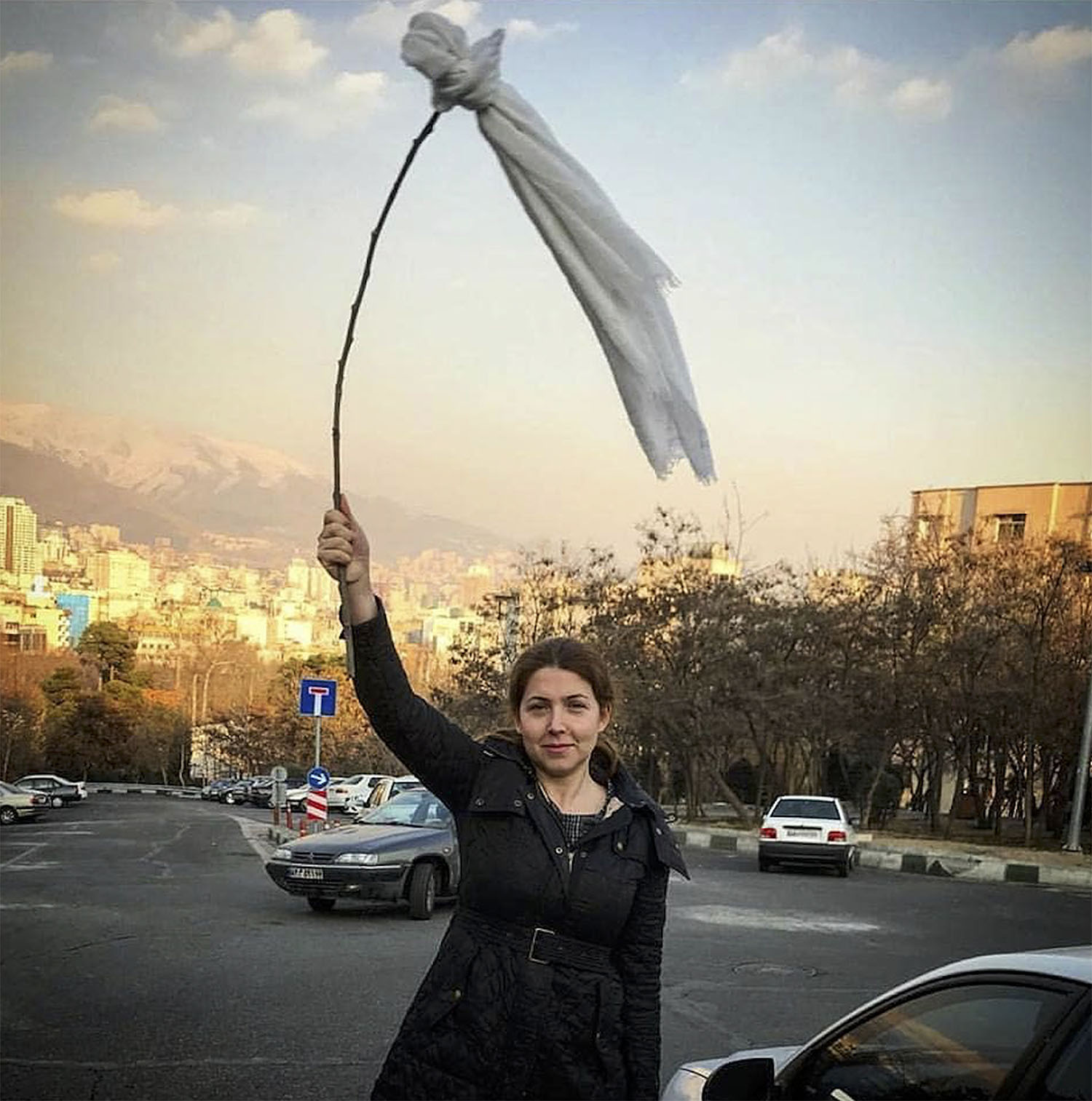 An Iranian woman protests the obligatory headscarf by taking it off and waving it on a stick in defiance of strict Islamic law in Tehran on Jan. 30, 2018. (Salampix/Abaca/Sipa via AP Images)

Today, ordinary Iranian women, fed up with their second-class status, are refusing to obey the laws that do not protect them. Where are the American Milletts now? Why are the feminists who so fervently defend the rights of Muslim women to don the hijab in Western countries silent about the plight of Iranian women who demand to have choice? As the leading voice of the anti-mandatory veiling movement, Masih Alinejad once eloquently said before the European Parliament, “We’re not asking you to come and save us. We’ll save ourselves.” Instead, she wanted Western leaders, especially women, to see that Iranian women simply want the same right that European women take for granted: the choice to dress as they wish.

Yet to democratic-minded Westerners, who rightly wish to define themselves against their homegrown right-wing nationalists, the veil has come to be a symbol of resistance, precisely the opposite of what it means to the women who are forced under it: a symbol of oppression. They forget that tolerance without context is merely another form of dogma. Defending the right of Muslims to don the veil is perfectly appropriate in Western societies where nativists and xenophobes are gathering political momentum. But failing to speak against the veil as a symbol of gender apartheid in countries where it is enforced by law is the betrayal of all the feminist and democratic values they hold dear. Often those who keep silent do so in the name of cultural relativism. Citing the sins of colonialism, they argue that meddling in the matter of the veil is meddling in the indigenous traditions of another people. But if the chief moral flaw of the colonial perspective was its inability to see those whom they ruled over as equals, then the current tolerant liberals can be accused of the same. They fail to see that freedom of choice—in this case, to dress—is not a luxury belonging only to those in the West but a universal right for all. As long as a group of powerful Iranian men impose their will on half of the nation, the right to choose how to dress must remain a global human rights struggle.

Roya Hakakian is the author of two books of poetry in Persian and the recipient of a Guggenheim Fellowship in nonfiction. Her most recent book, a New York Times Notable Book of 2011, is Assassins of the Turquoise Palace, an account of a 1992 plot to kill Iranian dissidents in Berlin. She is the co-founder of the Iran Human Rights Documentation Center. Twitter: @RoyaTheWriter

NEW FOR SUBSCRIBERS: Want to read more on this topic or region? Click + to receive email alerts when new stories are published on U.S. Foreign Policy, Iran

Those Who Dare to Bare Their Hair

Masih Alinejad is helping Iranian women challenge the regime — one hijab at a time.

Transformation in Iran Will Come From Women

On the 40th anniversary of the Islamic Revolution, a former political prisoner assesses the prospect of change in Iran.

Iran Is Committing Suicide by Dehydration

The Islamic Republic’s corruption is draining the country of its most precious resource: water.