President Mauricio Macri has disappointed in his first term, but the alternative may not be any better.

Argentina will hold presidential elections later this year, but the contours of the contest are starting to delineate. The current president, Mauricio Macri, from the center-right Cambiemos (“Let’s Change”) coalition, will seek re-election. Although it is still unclear whom Macri will be running against, we already know that his opponent will be Peronist. Indeed, it is not unlikely that his opponent will be former President Cristina Fernández de Kirchner, whom he replaced in 2015. Although she has not announced her intentions, surveys already have them head to head in an eventual runoff, since neither would likely be able to win in the first round. Surveys also show that each candidate’s main asset is popular dislike for the other, which will push voters to select whichever they believe is the lesser of two evils. That Argentines find their choices so unappealing might seem surprising given the fanfare with which Macri came to office.

Macri’s election in 2015 marked a watershed in Argentine politics. He was the first democratically elected president who belonged to neither the populist-based Peronist Justicialist Party or the middle class-based Radical Civic Union (UCR), Argentina’s two traditional parties. When he finishes his mandate in December, he will be the first non-Peronist president since 1928 to sit a full presidential term. Given his right-wing leanings, his initial win was taken as a signal of changing regional politics by pundits who forecasted a right-wing turn in Latin America. (There’s some evidence to back up their argument: Macri’s victory was followed by those of right-wing leaders Pedro Pablo Kuczynski in Peru in 2016, Sebastián Piñera in Chile in 2017, and Iván Duque in Colombia, Mario Abdo in Paraguay, and Jair Bolsonaro in Brazil in 2018.)

If Macri’s beginnings were enough to earn him a place in history, his track record since is less inspiring. He was inaugurated with promises to improve a beleaguered economy, reduce poverty, end political polarization, and bring Argentina back onto the global stage. He hasn’t done much on any of those scores.

When Macri first ran, his predecessor, Peronist Fernández de Kirchner, was completing her second term (her husband, the late Néstor Kirchner, had finished his own stint as president before her) and was banned by the constitution from seeking immediate re-election. The 12 years of the two Kirchners had coincided with a commodities boom, which had boosted Argentine exports, especially soybeans. 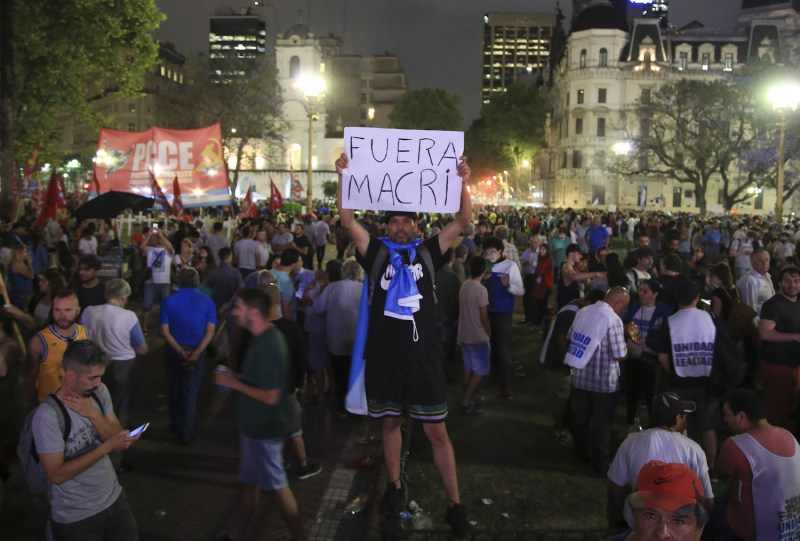 A demonstrator holding a sign reading “Macri Out” during a protest in Buenos Aires on Dec. 7, 2017. (Marcelo Capece/AFP/Getty Images)Judge Claudio Bonadio ordered Cristina Kirchner’s arrest and called on the Senate to strip her of her parliamentary immunity for allegedly covering up Iranian involvement in a deadly 1994 bombing of a Jewish center in Buenos Aires. / AFP PHOTO / NOTICIAS ARGENTINAS / MARCELO CAPECE / Argentina OUT (Photo credit should read MARCELO CAPECE/AFP/Getty Images)

The Kirchners took advantage of the solid economic growth that accompanied high agricultural prices to establish an ambitious agenda. They expanded welfare programs and strengthened collective bargaining, restructured the foreign debt on which Argentina had defaulted in 2001, and pushed for the prosecution of human rights violations that occurred during the 1976 to 1983 military dictatorship. They also expanded the size of the public sector while deepening state intervention in the economy, including through protectionist measures that favored domestic industries, and restricted exports to restrain food prices. Since revenue was heavily dependent on export taxes, a hike in soybean export taxes brought them into conflict with farmers. Angry about the coverage of those widespread protests, the Kirchners broke with the traditional media. Corruption allegations further polarized media coverage, and things got worse when a prosecutor investigating a foreign-policy decision made by Fernández committed suicide under shady circumstances—his death has since been ruled a murder.

Facing growing inflation during her first term, Fernández began doctoring official statistics. In her second term, she resorted to currency controls and a dual exchange rate. As agricultural prices declined after 2014, she sought to borrow from international markets. But a U.S. ruling forcing Argentina to stop payments to its bondholders until it repaid the minority of creditors who had rejected her debt restructuring closed Argentina’s access to financial markets. As a result, Central Bank reserves diminished rapidly, and the economy deteriorated throughout the rest of her term.

By the end of 2015, about a third of the population was poor, inflation was almost 30 percent, and the fiscal deficit had reached 7 percent of GDP. Economic distress, corruption accusations, and increasing polarization between supporters and opponents of the Kirchners dominated the 2015 electoral campaign. With the Peronist party divided between Kirchnerist and anti-Kirchnerist factions, Macri was able to eke out a victory.

Macri is the scion of a wealthy businessman. He abandoned his entrepreneurial career for the presidency of Argentina’s premier soccer club before founding a right-wing party, Republican Proposal, or PRO. PRO grew quickly in Buenos Aires, and Macri was elected mayor in 2007 and re-elected in 2011. In 2015, PRO made an alliance with UCR, and with a UCR splinter, Civic Coalition, to form Cambiemos. Although Macri won the presidency, his coalition held a minority of seats in both chambers of Congress. As a minority president, he was forced to negotiate with the different Peronist factions to pass laws.

Macri started his administration with a honeymoon of public support. In his first week, he abolished export taxes and the dual exchange rate without causing a panic. Macri also used his popularity and control of the government’s purse to pass laws with Peronist support. One of those laws allowed him to regain access to international financial markets. Taking advantage of low interest rates, he relied on cheap credit to finance his gradual strategy of deficit reduction while maintaining popular support. The success of this strategy seemed apparent in the midterm legislative elections of October 2017. Cambiemos increased its electoral share to 40 percent. Facing a still-divided Peronist movement, it won in 13 of 24 electoral districts. It even defeated Fernández in the Senate race of the largest electoral district, the province of Buenos Aires, by four points.

The government had little time to celebrate. In December, an executive bill to modify pension payments resulted in widespread popular protests, bringing back fears of Argentina’s old days of instability. The episode suggested that the government lacked skill and political sensitivity. Even worse, as Macri was preparing to host the G-20 meeting in 2018 to showcase Argentina to the world, an increase in the U.S. Federal Reserve’s interest rate reduced investors’ appetite for emerging markets. The subsequent run on the currency produced a drastic devaluation.

Between May and June last year, the Argentine peso fell from 20 to a dollar to nearly 30 to a dollar, with dramatic effects for a very dollarized economy. Macri was forced to resort to the International Monetary Fund for financial support (despite its domestic unpopularity) and to reshuffle his cabinet. A deep drought reduced the soybean harvest, denying Argentina an important export and source of foreign exchange. IMF promises proved insufficient to assure creditors of Argentina’s ability to make payments on its ballooning debt.

Then, in August, a corruption scheme involving public works during the Kirchners’ administrations came to light. With so many government suppliers involved, infrastructure construction was brought to a halt. A second run on the currency brought the exchange rate to 40 pesos a dollar in September, forcing the government to return to the IMF to beg for additional support. In return, Macri promised to run a fiscal deficit of zero while deploying yet another Central Bank team to assuage the uneasiness of the markets. Public utility and transportation subsidies were ended, hitting Argentines in the pocketbook. And controlling inflation required a restrictive monetary policy, which pushed the country into a recession. In 2018, inflation still reached almost 50 percent, and the economy contracted by more than 2 percent. More than a third of the population ended the year living in poverty, according to official statistics.

As expected, public opinion surveys point to economic problems as voters’ most urgent issue. The Peronist party is still divided over who is the best person to solve them, but Fernández has the most popular support. For his part, Macri’s electoral strategy is based on threatening voters with the consequences of Fernández’s return by highlighting the corruption scandals and populism of her administration. It isn’t winning him much love. According to surveys, the public views both him and Kirchner more negatively than positively, and either of them could win in a competitive runoff. The question is whether a third candidate—most likely also a Peronist—can make it to the runoff and defeat either of them. Former Finance Minister Roberto Lavagna is presenting himself as a unity candidate. Yet, it is still early to say whether he will be able to draw enough support to become the focal point of the election or if the presidential election will be decided between the current incumbent and his predecessor in what would amount to a disappointing competition for almost all Argentines.

M. Victoria Murillo is a professor in the Department of Political Science and the School of International and Public Affairs at Columbia University.

Only Criminals Can Clean Up Argentina’s Corruption

A plea for plea bargains in Buenos Aires.

Why the region says yes to same-sex marriage and no to abortion.

China Made Mauricio Macri a Deal He Couldn’t Refuse

Argentina’s president promised to separate his country’s economy from Beijing. That was before Beijing had its say.