Head of watchdog organization detained for work on Xinjiang camps.

ASTANA, Kazakhstan—For the past two years, the organization Atajurt Eriktileri (“Homeland Volunteers”) has been on the front lines of documenting and raising awareness about the mass detentions in the Chinese region of Xinjiang. Atajurt is a Kazakhstan-based organization of volunteer activists and family members who have lost relatives to China’s crackdown on mostly Muslim minorities, principally Uighurs but also ethnic Kazakhs and others. The group’s office in Almaty, Kazakhstan’s largest city, has become one of the few windows into a sealed region for international journalists and organizations by hosting regular press conferences and posting video testimonies of recently released detainees from Beijing’s vast network of internment camps, estimated to hold somewhere between 800,000 and 2 million people.

All the while, the Kazakh government—caught between placating a vital political and economic partner in Beijing and assuaging a populace dismayed over the fate of ethnic Kazakhs in neighboring China—has tolerated Atajurt’s grassroots activism as more and more ethnic Kazakhs have joined Uighurs and other Muslim minorities in Xinjiang’s camps.

But the dramatic arrest of Serikzhan Bilash, the head of Atajurt, in the early hours of Sunday morning appears to mark the end of Kazakhstan’s balancing act, with the local authorities moving against one of the largest firsthand resources for information about Beijing’s internment system and silencing a prominent local critic of China’s policies.

“This is not justice—it is just a way to stop Serikzhan,” Leila Adilzhan, Bilash’s wife, told Foreign Policy on the phone. “He devoted himself to helping people and did it because he wanted Kazakhs in China to be free.”

Bilash was arrested in his hotel room in Almaty on Sunday by Kazakh security services after being harassed and followed Saturday night by men he said were wearing earpieces. In a message sent to several reporters prior to being arrested, Bilash said he feared for his safety, and according to other Atajurt activists, he decided to rent a hotel room Saturday night instead of going home. Video circulated Sunday morning by activists showed that Bilash’s downtown hotel room had been turned over, with bloodstains found on the floor. He was then brought north to the capital, Astana, where he was detained and on Monday released on house arrest, where he is awaiting trial.

Mihra Rittmann, a senior researcher at Human Rights Watch, told FP that the case against Bilash is worrisome given how Kazakh authorities transferred him to Astana “without explanation.” The government has also charged Bilash with extremism and “inciting discord,” vaguely worded articles of the law that Rittmann says have been “misused” by the government in the past to convict and silence its critics.

“Many people around the world now know about what is happening to Kazakhs and others in China because of him, and this made him a target.”

“This is completely wrong. [Bilash] is the leader of an organization, not an extremist,” said Aiman Umarova, a prominent Kazakh human rights attorney who advises Atajurt, during an interview Sunday night. “Many people around the world now know about what is happening to Kazakhs and others in China because of him, and this made him a target.”

Umarova flew from Almaty to Astana on Sunday to submit her paperwork to represent Bilash as his lawyer, but she said that the authorities initially refused to accept her documents, saying that Bilash was represented by a state-appointed lawyer instead. Umarova returned to meet with investigators on Monday, and she told FP that they have now recognized her as Bilash’s attorney. The Atajurt leader was also released on house arrest Monday night in Astana with several restrictions, according to Umarova. Bilash will be confined to a friend’s house in Astana, far from his family and supporters in Almaty, and will be subject to electronic monitoring. Umarova also said that the judge ordered Bilash to not be active with any organizations or to give interviews to media or members of the public while he awaits his court appearance in two months.

“To me, this shows that our government believes that relations with China are more important than the rights of its own citizens,” Umarova said.

China is a thorny topic in Kazakhstan, which shares a 1,100-mile border with its Central Asian neighbor. Beijing is one of the country’s largest investors, and the Kazakh government plays a strategic role in China’s ambitious Belt and Road Initiative infrastructure projects in Eurasia. The detention of ethnic Kazakhs in China, however, has inflamed public attitudes among a growing section of the population and put the government’s China-friendly stance at odds with the public mood in the country. 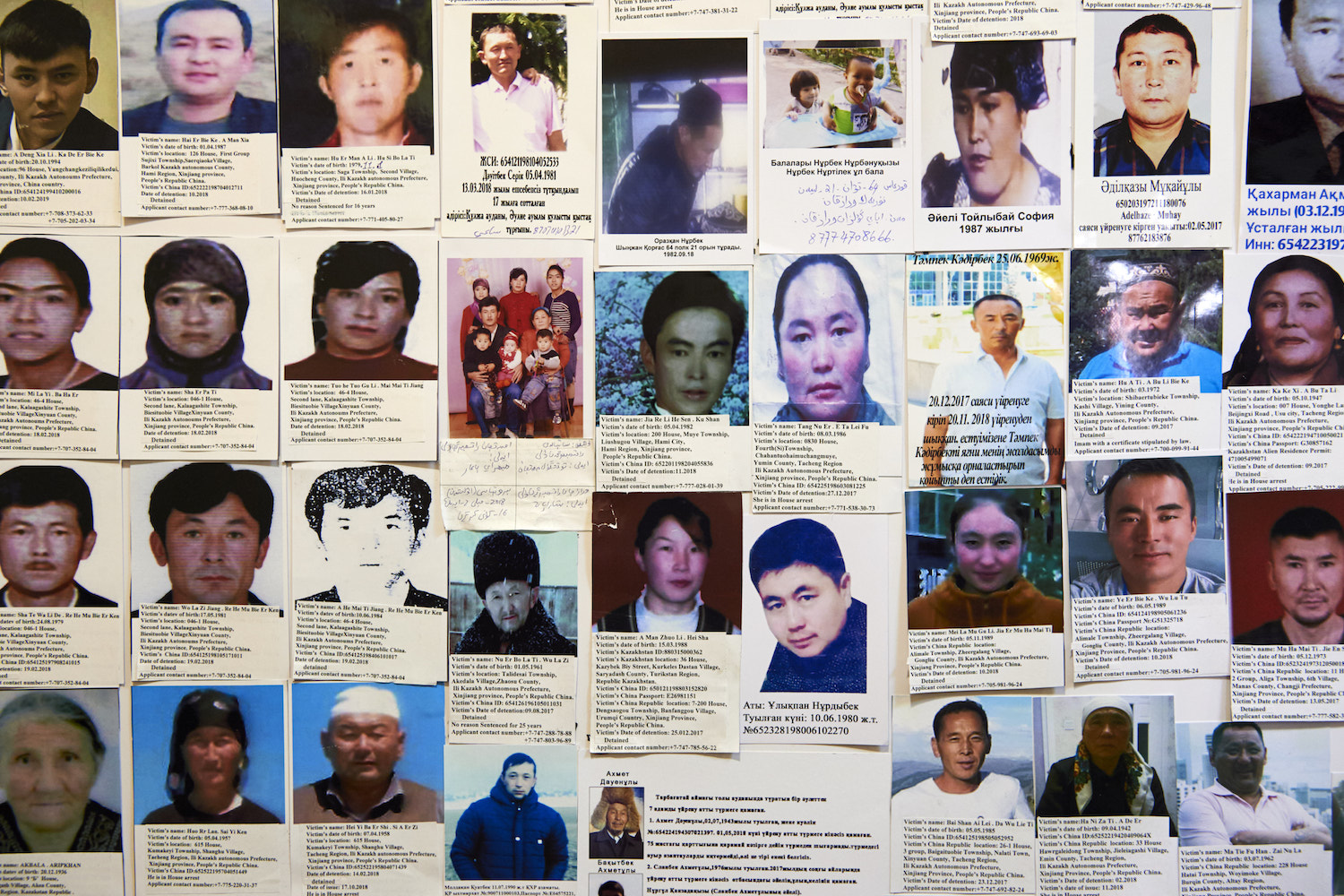 Photos and information of Kazakhs detained in Chinese detention camps hang on a notice board in the office of Atajurt Eriktileri in Almaty on Feb. 26. (Izturgan Aldauyev/Washington Post/Getty Images)

The Kazakh government has engaged in some behind-the-scenes diplomacy with China due to mounting public pressure but has treaded carefully in public statements so as not to contradict Beijing’s line about the camps, which justifies them as a needed measure to combat extremism among China’s Muslim population.

Umarova also currently represents Sayragul Sauytbay, an ethnic Kazakh Chinese national, who crossed illegally from Xinjiang to Kazakhstan in the spring of 2018 after working at a camp and then fleeing detention herself. Sauytbay applied for asylum and is serving a suspended sentence after pleading guilty to crossing the border illegally. Bilash and Atajurt played a major role in attracting international media attention to Sauytbay’s summer 2018 trial, where she provided eyewitness testimony about China’s re-education camps and helped sustain grassroots support in Kazakhstan against sending her back to China. In August 2018, a Kazakh judge ruled against extradition, but Sauytbay’s asylum claims have since been denied twice, and Umarova said that the Kazakh authorities may create legal loopholes to extradite Sauytbay.

The charges against Bilash, activists fear, could also be a harbinger of new pushback against Sauytbay and others working on the issue of Kazakhs detained in Chinese camps.

In February, Bilash was fined 252,000 tenge (about $700) for operating an unregistered organization, despite having his previous attempts to register Atajurt denied by the authorities.

“It’s a signal [from the government] to everyone who is trying to draw attention to this issue,” said Andrey Grishin, a researcher at the Kazakhstan International Bureau for Human Rights and Rule of Law, a nongovernmental organization based in Almaty. “It’s possible this was done under Chinese pressure, or maybe just to demonstrate loyalty to China, but it’s clear the decision was made with some urgency.”

Despite being questioned by the authorities in the past, Bilash did not come under pressure until late January, when a public letter signed by prominent Kazakhs called for Atajurt to be closed and accused Bilash of causing harm to Kazakhstan’s relationship with China. In the past, similar letters have been used as a pretext for launching legal investigations against journalists and activists in the country that touched on sensitive issues for the government. In February, Bilash was fined 252,000 tenge (about $700) for operating an unregistered organization, despite having his previous attempts to register Atajurt denied by the authorities.

Other activists involved on the issue of ethnic Kazakhs detained in Xinjiang say that they will be monitoring closely how the legal proceedings develop, but they note that regardless of whether Atajurt is permanently closed, the groundswell sparked by Bilash and others will not be stopped so easily. Aina Shormanbaeva, the president of the International Legal Initiative, an NGO providing legal assistance to Kazakh families with relatives in Chinese internment camps, said that Kazakhs with family detained in Xinjiang will not be deterred by the recent actions taken against Bilash from petitioning local and international authorities on their relatives’ behalf.

“This issue is serious and has become very big [in Kazakhstan],” Shormanbaeva said. “Repression against activists will not make the problems caused by gross human rights violations in Xinjiang disappear.”

Ex-Soviet Bioweapons Labs Are Fighting COVID-19. Moscow Doesn’t Like It.

One of the greatest achievements of U.S. foreign policy has been targeted by a vicious disinformation campaign.

Sayragul Sauytbay, the only person to have worked inside an internment camp in Xinjiang and spoken publicly about it, now faces an uncertain future in Kazakhstan.

Terrorism After the Pandemic

This Time, Russia Is in Afghanistan to Win