Comic Relief’s Red Nose Day, held every two years, is one of British television’s biggest events. Founded in 1985 to address the ongoing Ethiopian famine, the charity’s mission statement is to “drive positive change through the power of entertainment.” Its fundraising efforts culminate every two years in a highly publicized evening of television that mixes emotionally driven fundraising and slapstick comedy. With sketches featuring celebrity characters like Mr. Bean and Borat, a hotly anticipated Four Weddings and a Funeral reunion, and past appearances from the Game of Thrones cast, Coldplay, James Corden, Elton John, and even then-Prime Minister Tony Blair, it’s no surprise that the show’s viewing numbers are astronomical, with an average of 9 million Brits tuning in every year.

This might all seem like a bit of harmless, even positive British eccentricity, in keeping with a long tradition of charity stunts and raising an admirable 1 billion pounds, about $1.3 billion, over the decades. But Comic Relief also shapes Britain’s images of Africa—and perpetuates a long, worrying tradition of benevolent European saviors plucking Africans from the depths of desperation.

Interspersed among the comedy, Red Nose Day tugs heartstrings with emotive insets in which celebrities, usually white, visit African towns and villages. Time and again, these clips foreground the celebrities and their reaction to the poverty they see, not the Africans themselves. A typical example was Ed Sheeran in 2017, who met with two homeless children in Liberia, in a piece that seemed to be more about his personal journey than any African’s story. The Norwegian aid watchdog Radi-Aid denounced the clip as a brazen example of “poverty tourism,” prompting Liz Warner, the CEO of Comic Relief, to reassure critics that the organization was taking its “first steps” toward change.

Yet the charity came under fire again in February when one of its celebrity ambassadors, the journalist Stacey Dooley, posted a selfie on Instagram with an unnamed Ugandan child placed on her hip. As Dooley smiles into the camera, the child looks none too happy to be there—and the caption, “OB.SESSSSSSSSSSED,” seemed to better fit a handbag than a human being. 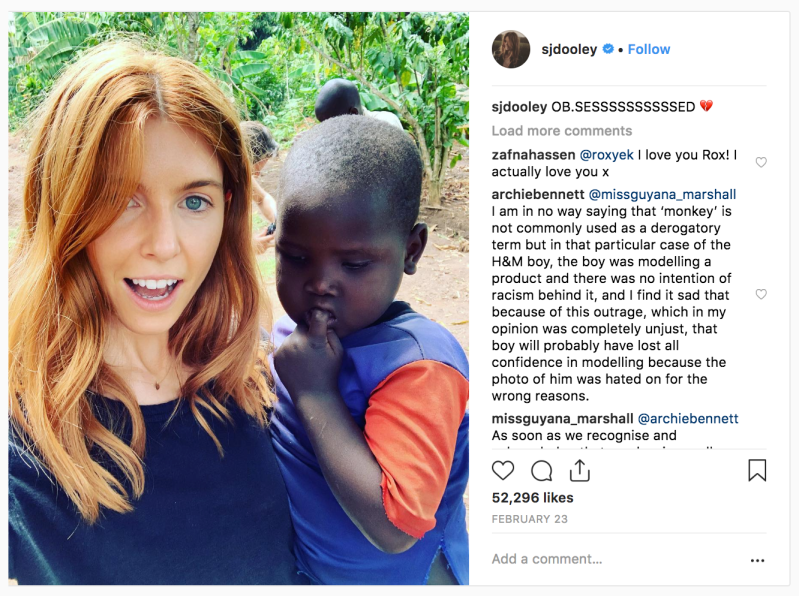 The impact of such images starts early. The vast majority of British primary schools host their own Red Nose Day fundraising events, and earlier this month, one of Britain’s most popular preschool entertainers, Mr. Tumble, encouraged the country’s nurseries to take part. A 2011 study by the Leeds University Centre for African Studies found that television programs and charity appeals such as Red Nose Day were the main external influences on young people’s perceptions of the African continent.

Yet questioning Comic Relief’s depiction of Africa is almost blasphemous in Britain, as Labour Member of Parliament David Lammy, born to Guyanese immigrants, found out. Lammy has repeatedly criticized Comic Relief’s fundraising images. “The films about the U.K. charities were excellent,” he told Foreign Policy, “The victims had agency.” On the other hand, the short films about sub-Saharan African countries barely afforded the victims basic humanity. During Red Nose Day 2017, cameras showed three different images of dead African children, two of whom died during taping. “I couldn’t think of a context in which a British baby would die on air without significant backlash,” Lammy said.

After several meetings with Comic Relief staff, however, the member of Parliament was assured things would be different. Following the Dooley photo, however, Lammy commented on Twitter, “The world does not need any more white saviours.”

“It appeared the child was a prop,” he said. “It’s a question of dignity.”

In turn, Comic Relief released a statement, doubling down on its defense of Dooley—and prompting a wave of stories depicting Lammy as unappreciative. Dooley responded on Twitter, asking him, “David, is the issue with me being white?” After Lammy made an appearance on the popular TV show This Morning, viewers were quick to hit back—tweeting to accuse Lammy and Ugandan diplomat Julius Peter Moto, another Comic Relief critic, of being ungrateful,

Comic Relief’s response matched this “shut up and be grateful” attitude—one that echoes colonialists who thought of imperialism as a form of charity in itself. The use of poverty porn is key in the continued portrayal of the African continent as inferior to the West— and as Western charity as its only form of salvation. These beliefs allow the British public to wallow in the kind of nationalist nostalgia that fueled Brexit and reaffirm the achievements and the compassion of the white saviors, patting themselves on the back for solving the same problems they caused. As Susan Sontag wrote in Regarding the Pain of Others, “Our sympathy proclaims our innocence as well as our impotence.”

The stereotype of the white savior, the secular missionary, is so prevalent in the age of Instagram that even Barbie has been used to poke fun at it. It may seem a long way from an Instagram photo to the shadows of empire, but colonialism caused unfathomable political, religious, and economic instability across Africa, while the British Empire routinely drained African countries of both resources and people. That responsibility is rarely or never mentioned in charitable efforts. “If you don’t understand the history of slavery and colonialism in Africa, you have no business being in the development sector,” Lammy said.

Britain’s contemporary aid sector maintains the country’s image of a benevolent world power, allowing Brits to believe that Africa is simply unlucky, that these problems bubble up out of Africa, rather being the direct result of structural or exploitative causes. The resulting message mirrors the empire: poor blacks waiting to be saved by the white man.

But while Comic Relief may be hugely influential on the British public, the defensive cry of “don’t bite the hand that feeds you” shows just how distorted its self-image really is. Although the organization was able to spend 54 million pounds, about $70 million, on tackling international poverty, Lammy’s office investigated the impact of the charity’s international aid and found that Comic Relief gives around 20 percent of what Oxfam gives, 0.38 percent as much as U.K. government aid, and 1.3 percent as much as U.K.-to-Africa remittances.

And good intentions only go so far. In the past few years alone, Oxfam has been the center of an international sex abuse scandal; the American Red Cross, which raised over half a billion dollars after the 2010 Haiti earthquake, was accused of building just six homes there in five years, rather than permanently housing the 130,000 people it claimed to; and a BBC Panorama exposé found that Comic Relief invested money in arms and tobacco shares.

Inexperience and ignorance has repeatedly shown how damaging aid can be when not implemented correctly. After Bob Geldof organized the famed Live Aid concert in 1985, which raised 30 million pounds, Geldof repeatedly ignored warnings about the role Ethiopia’s leader, Mengistu Haile Mariam, played in the famine in the first place. Though the Ethiopian famine was presented as a natural disaster, organizers glossed over the many contributing factors, which included devastating civil war and forced agricultural collectivization.

The attitude of nongovernmental organizations, which the writer Arundhati Roy refers to as something that “depoliticizes resistance,” allowed Mengistu to use much of the nearly $5 billion raised by international relief agencies like Live Aid to implement social control programs. Carted off on a brutal journey of forced resettlement using trucks provided by Save the Children, hundreds of thousands of people died in the process, by some estimates. Historians have since theorized that the misuse of Live Aid funds may have contributed to as many deaths as lives they saved.

Kitty Wenham-Ross is an English journalist.

Sudan’s New Prime Minister Grapples With His Country’s Past

Abdalla Hamdok wasn't sure he wanted the job, but six months later there is reason to hope—despite the failed mutiny this week.

But talks in Washington haven’t yet solved the trickiest questions still looming over the dam’s impact on countries downstream.

Is Liberal Democracy Always the Answer?

Guinea-Bissau challenges the imposition of Western forms of government.