The historic tropical storm killed hundreds and left an area of more than 800 square miles covered in water.

Tropical Cyclone Idai struck the Sofala ‘province of Mozambique in the waning hours of March 14, causing damage and flooding that could make it one of the worst weather disasters to ever hit the Southern Hemisphere.

Idai left Sofala with what resembled an inland ocean stretching more than 30 miles wide and potentially about 20 feet deep. The tropical storm destroyed 90 percent of Beira, a port city of more than a half-million people. The confirmed death toll as of March 21 was 557 in Mozambique and neighboring Zimbabwe and Malawi, but with thousands still missing or at risk Mozambique’s president Filipe Nyusi said the death toll could reach 1,000.

The Sofala province is historically prone to flooding, and floods occur every two to three years in Mozambique, according to the Global Facility for Disaster Reduction and Recovery. It also reports that Mozambique ranks third among African countries for exposure to weather-related hazards.

But the “inland oceans” created by Idai surpass those created by any previous storm. A total of 836 square miles were covered in water as of March 20, according to the United Nations Institute for Training And Research (UNITAR). If the entire country of Bahrain were covered in water, it would only be roughly a third the size of the area flooded in Sofala.

To illustrate the extent of the damage, Foreign Policy created a map displaying satellite-detected surface water in Sofala province, using data from UNITAR as of March 20. This preliminary analysis shows the portions of land that have flooded in the days since Idai made landfall in Sofala on March 14. The satellite imagery, captured by NASA on March 15, shows Idai directly over Sofala. 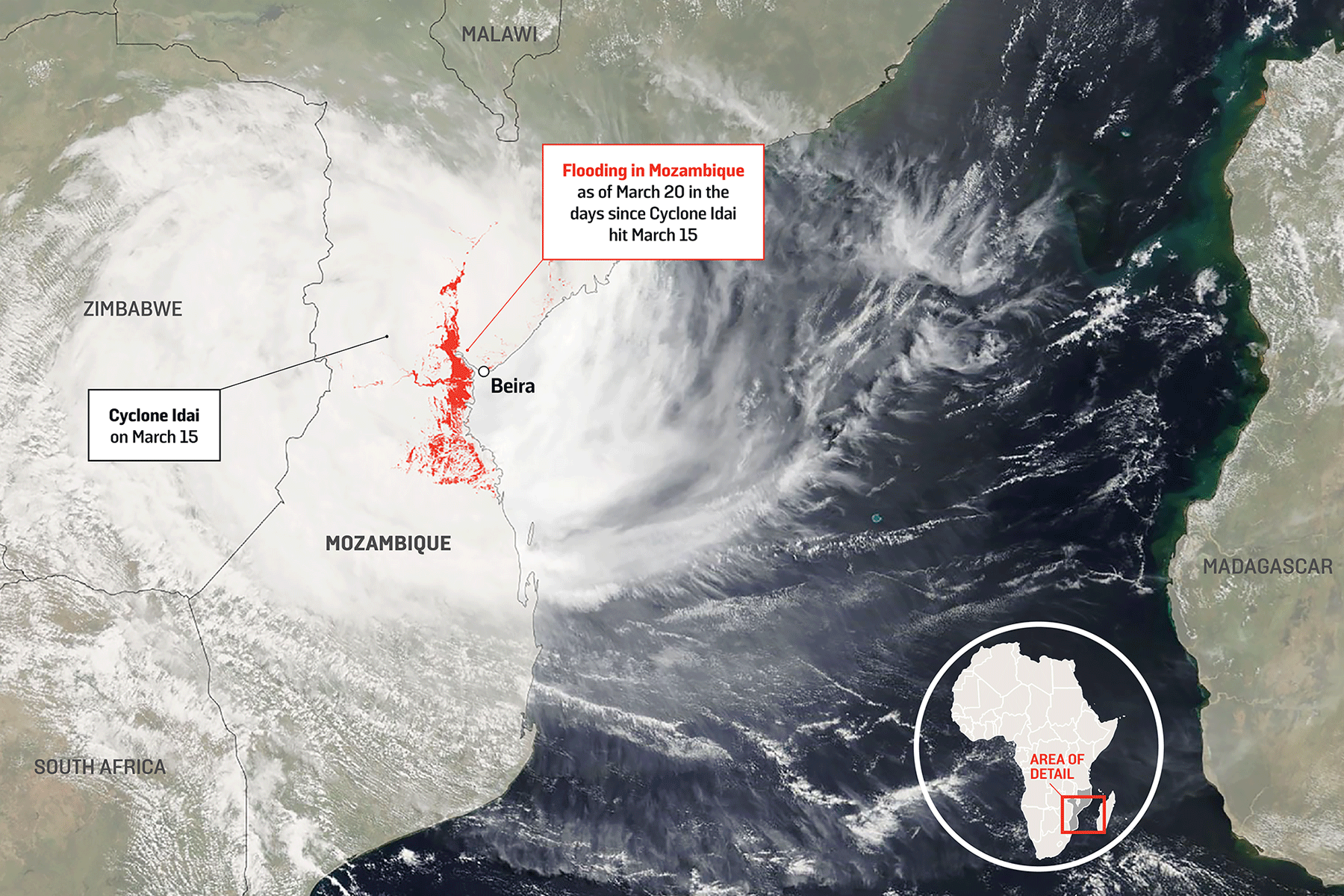 Below, images show the scope of the devastation as seen from above and on the ground in Mozambique and Zimbabwe. 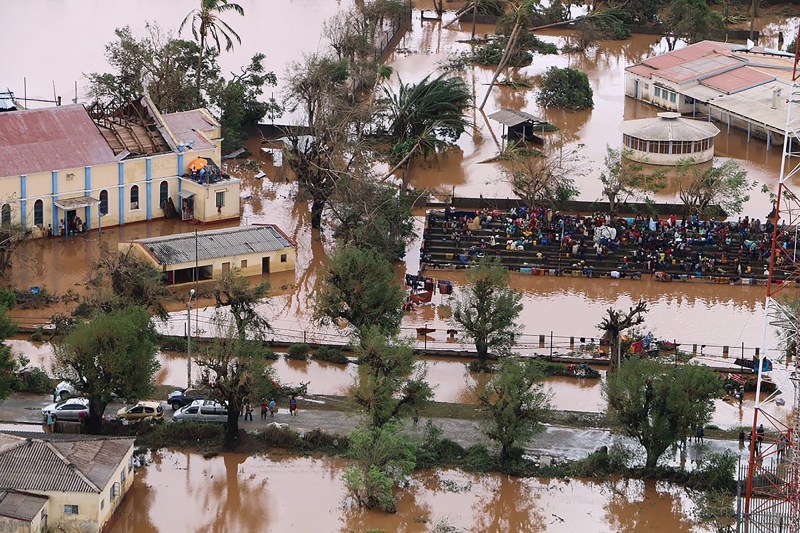 Stranded residents gather on the stands of a stadium in a flooded area of Buzi, central Mozambique, on March 20. (Adrien Barbier/AFP/Getty Images) 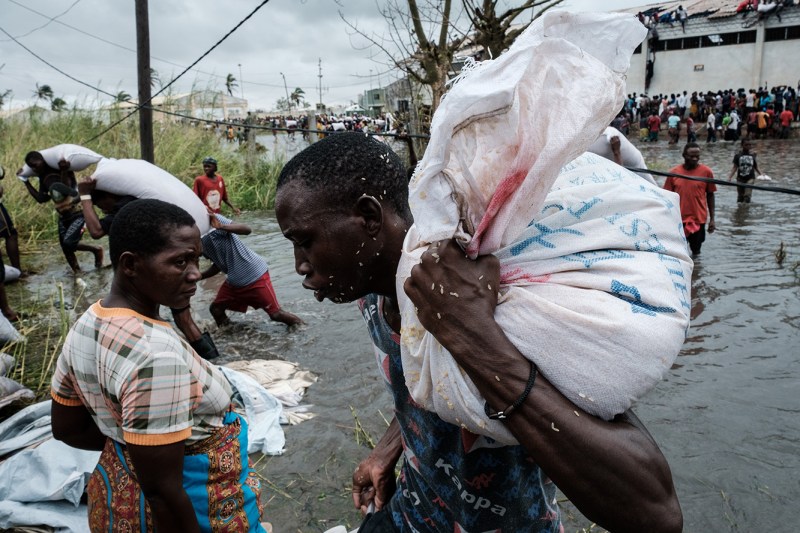 Residents retrieve sacks of rice from a warehouse that was surrounded by water in Beira, Mozambique, on March 20. (Yasuyoshi Chiba/AFP/Getty Images) 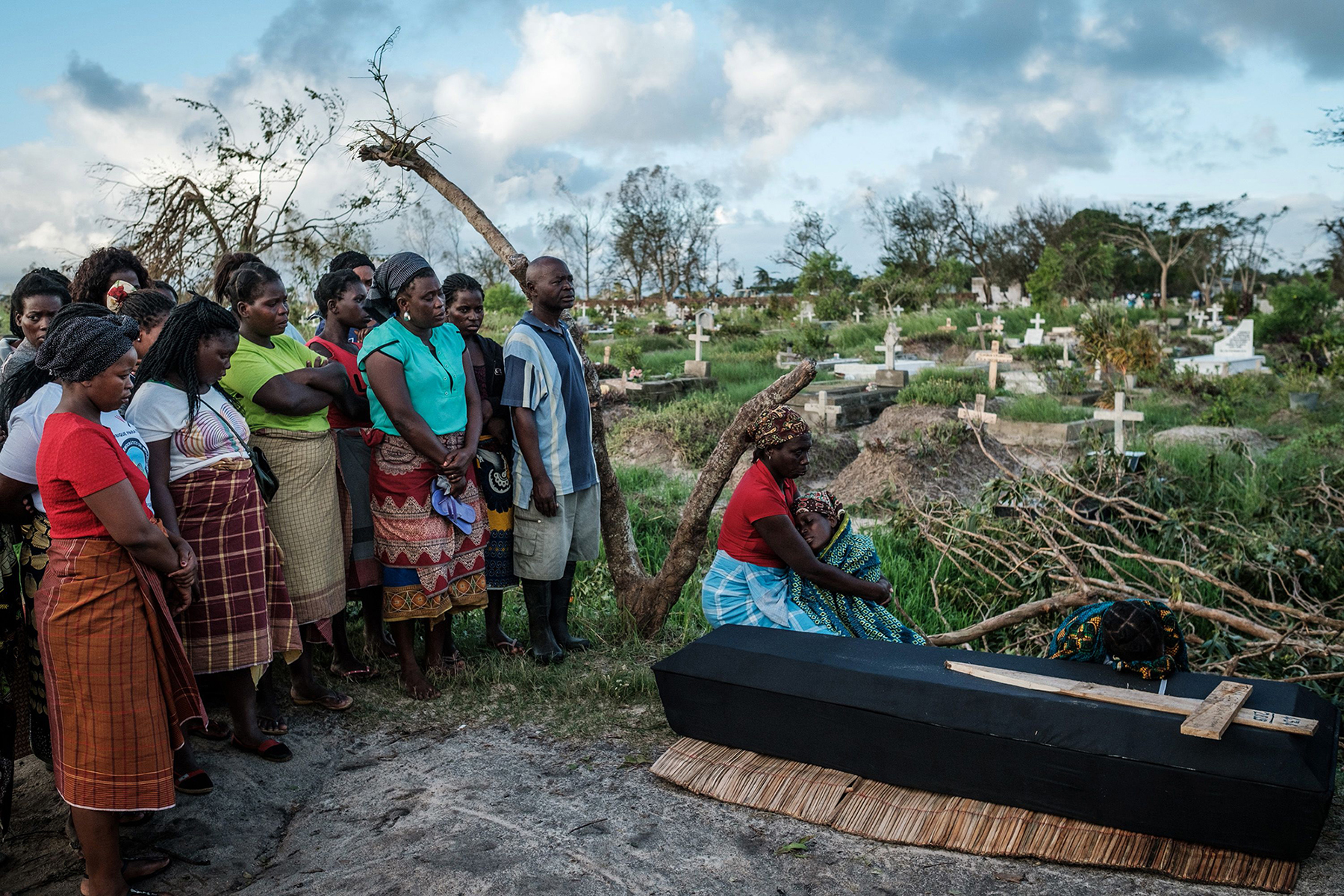 Rebecca Albino mourns beside the coffin of her husband during his funeral on March 20 after a deadly cyclone that hit Beira, Mozambique, killing hundreds there and in neighboring Zimbabwe and Malawi. (Yasuyoshi Chiba/AFP/Getty Images) 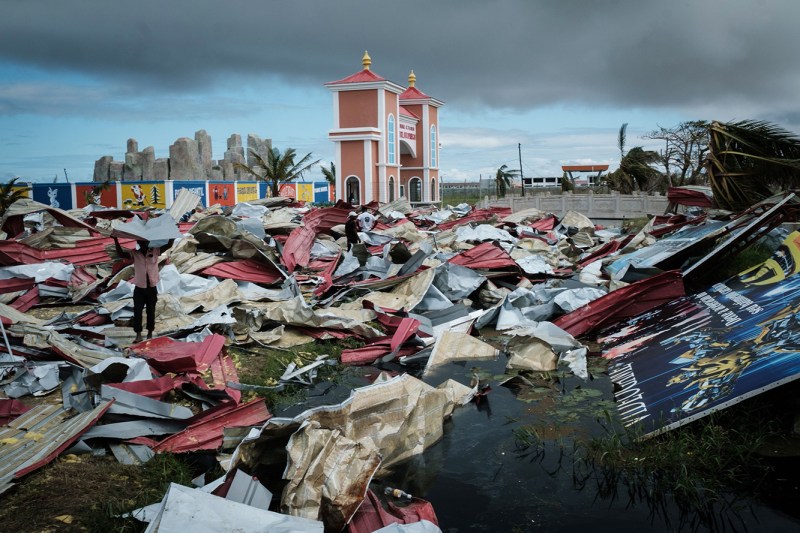 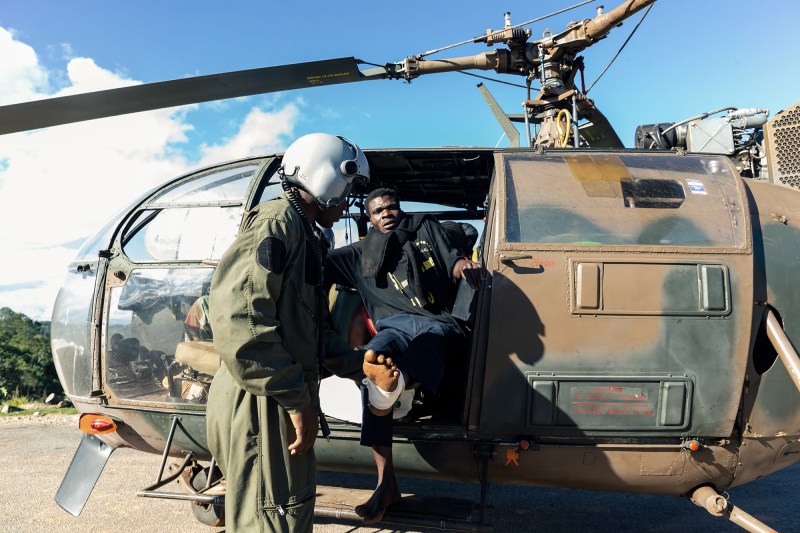 A man with an injured foot arrives at a temporary medical treatment camp after he was rescued by the Zimbabwean air force in Chimanimani on March 20. (Jekesai Njikizana/AFP/Getty Images) 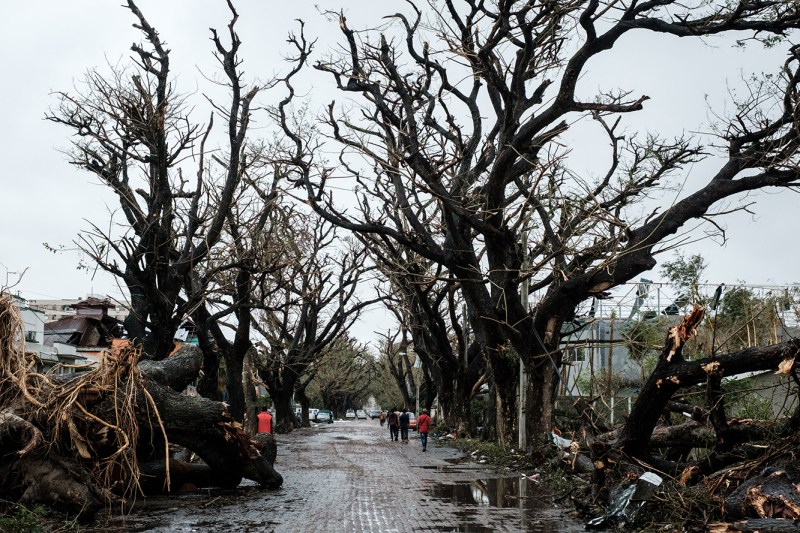 Trees damaged by the storm in Beira, Mozambique, on March 20. (Yasuyoshi Chiba/AFP/Getty Images) 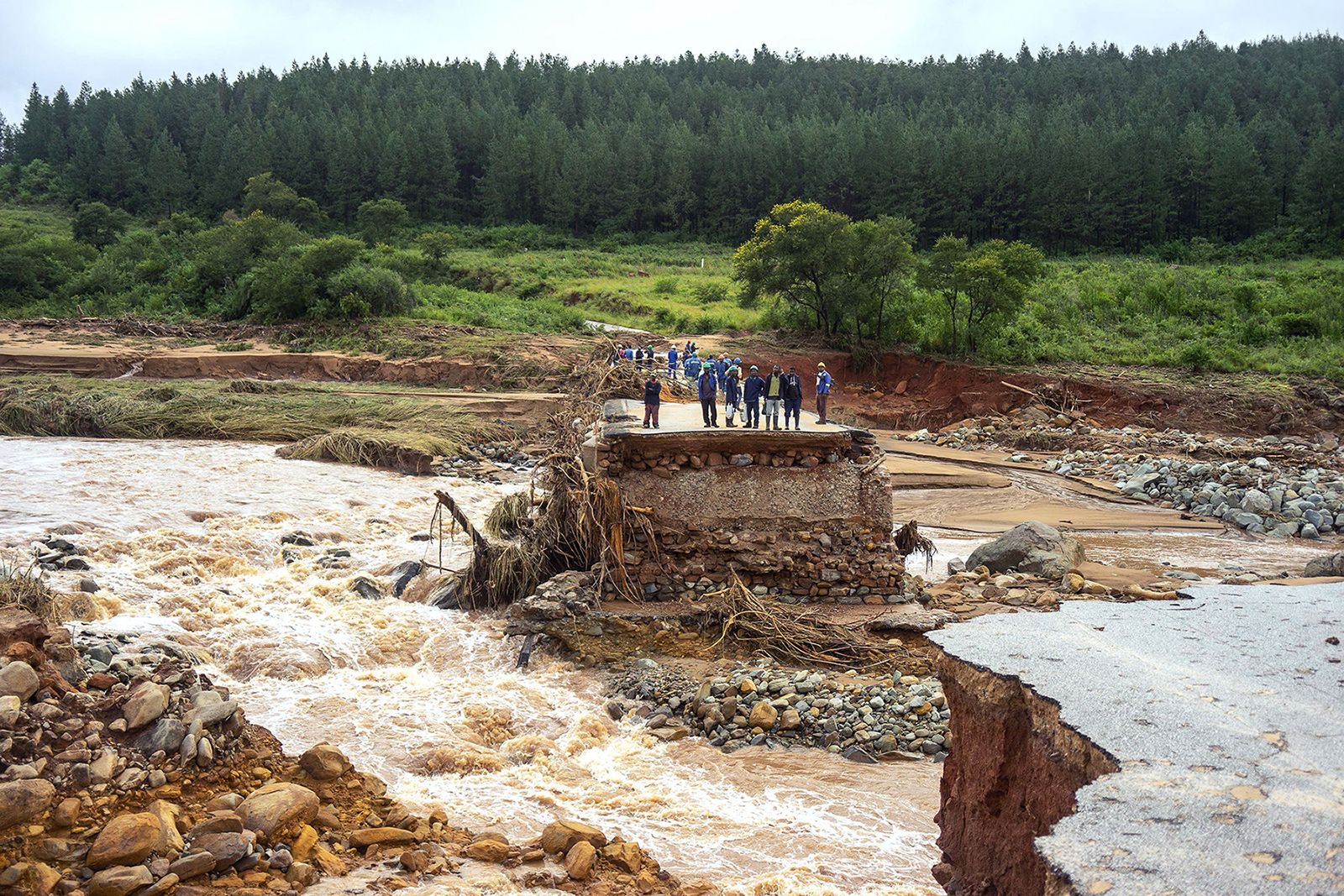