Saudi Arabia is fighting for a dangerous monopoly on Islamic thought.

Farah Pandith’s new book, How We Win: How Cutting-Edge Entrepreneurs, Political Visionaries, Enlightened Business Leaders, and Social Media Mavens Can Defeat the Extremist Threat, provides insights and observations often missed in the larger conversation about extremism. In a detailed chapter, condensed and adapted here, she investigates Saudi global influence—including imam training, free Saudi-translated Qurans, textbooks, destruction of human cultural heritage sites, and more—she saw in almost 100 countries while working for the U.S. State Department, and it dissects how and why Saudi Arabia has had an influence on identity for Muslims worldwide.

In March 2010, while serving as the State Department’s first ever special representative to Muslim communities, a position created for me by Secretary of State Hillary Clinton to connect to and engage with Muslim millennials globally, I managed to get a visa to visit China even though the State Department’s Human Rights Reports regularly called out China for its treatment of its minority Muslim populations, and one ethnic group in particular, the Uighurs. China saw the Uighur issue as a domestic terrorism problem and our public highlighting of it as an affront. Still, an opportunity had arisen—and, working with our embassy, we designed a trip that would allow me to talk to young Chinese Muslims in Shanghai, Nanking, Kunming, and elsewhere.

A highlight of the trip turned out to be a visit to a small town I had never heard of: Shadian, in the southern part of the country, about 150 miles from Kunming, where a population of Hui Muslims have lived for more than a millennium. My team and I drove for hours through lush countryside, cruising along dusty roads through villages replete with mom-and-pop storefronts and skinny white lampposts. Grocers sold fresh produce on the side of the road, their apples and leafy vegetables piled in perfect pyramids. Chinese-language signage promoted medical products. 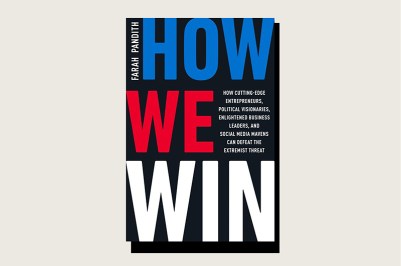 Our arrival in Shadian jolted me. Turning a corner, we came face-to-face with a glorious pedestrian boulevard with rows of majestic palm trees planted down the middle. At the end of those trees stood a huge, modern structure made of what appeared to be white marble and topped off by a light green dome. Fountains and two tremendous Jumbotron screens framed its entrance. I was mesmerized. What was all this? Then I glimpsed what seemed to be minarets flanking a prayer hall, and I knew: It was a mosque.

The next day, a professor at a local Islamic university, an ethnic Chinese man who identified as Hui, graciously hosted me for lunch at his home. Throughout the meal, my host talked about Islamic education—how important it was for Muslim kids to learn about the religion and mix with other Muslim students, and how few proper Muslim universities existed. He also related that local youth sought to learn about Islam by studying in Persian Gulf countries. The clock on the television set was set for Mecca time as well as local time, and the television was tuned to a Saudi channel.

Later, I toured the large mosque I had seen when I first arrived. It cost $19 million to build, funded entirely by private donations. My host seemed excited and proud to show the building to me. I asked him if Saudi money funded the mosque. He demurred.

I was pretty sure I already knew the answer, so I asked if he could take me to see a more traditional mosque from this region of China.

After much prodding, we got in the car for a short drive. When we got out, all evidence of the Gulf had vanished. I stood on a dirt road lined with modest houses and shops. My host pointed toward a compound surrounded by a tall wall covered over in painted terra cotta. “Here it is.” We proceeded through the entrance into a small courtyard, an oasis of fruit trees and flowerpots, the perfect site for prayerful contemplation.

The mosque itself was much simpler than the Gulf-style mosque had been, made of wood and reflecting the themes of traditional Chinese architecture. The structure’s roof curled outward at its edges, while its open doorways permitted a view of the faithful praying inside. The religious services it housed conformed to what I was told was the ancient Sufi devotion mingled with traditional indigenous Chinese customs.

At the entrance to the open-air prayer room, dozens of pairs of shoes belonging to the faithful had been placed in a neat line. I approached a group of elderly women sitting nearby. Instead of long black robes, they wore loose-fitting cotton pants and simple, tuniclike shirts as well as loose headscarves. I told them I was visiting from the United States and that I was interested in learning about the clothes they wore to pray. They indicated that they wore the traditional garb of Chinese Muslims. And what about the shiny mosque around the corner? “Oh,” they said, “that is foreign Islam.”

Extremists such as the Islamic State and al Qaeda would like you to think about Islam as homogeneous or monolithic. As they exploit the global identity crisis among Muslim youth, they propound a very particular set of ideas about Islam and individual purpose—ideas that originate in the Gulf region and Saudi Arabia in particular, and that include a claim to represent the only true Islam. This form of Islam, called Wahhabism, is rigid, intolerant, highly dogmatic, puritanical, and contrary to liberal values. In recent decades, it has proliferated thanks to a very important sponsor: the Kingdom of Saudi Arabia. One can’t understand the global system underpinning extremism without surveying the pivotal role played by the Saudi government as well as private organizations and individuals within the kingdom. In recent decades, the Saudis have spent up to an estimated $100 billion spreading Wahhabism and perpetuating the notion that they are Islam’s caretaker. Their methods to persuade and influence run the gamut and include the funding of mosques, schools, textbooks, imams, imam learning centers and exchanges, cultural institutions around the world. The Saudis don’t simply want their extreme form of religious practice and belief to prevail. Religious forces in the kingdom, backed by the ruling family, want to destroy other, local traditions within Islam. To that end, they are rewriting history, erasing evidence of the past to favor their own narrative—a move that ideologically aligned extremists in many parts of the world have since copied.

The relationship between the Saudis and extremism is not merely one of affinity. The Saudi government and Saudi individuals have directly supported terrorist groups in the Middle East and beyond. At the same time, quite paradoxically, the Saudi government has also served as a staunch ally in the fight against terrorism, sharing intelligence and military assets and helping to rein in terrorist financing. It also serves as a valuable counterbalance against Iran’s influence in the Middle East. Puzzling, isn’t it? Such is the canny strategy that has served the Saudis so well for so long.

Beyond direct support, Saudi efforts at indoctrinating young Muslims worldwide have rendered them highly vulnerable to recruitment by extremist groups, including those formally unaligned with or even opposed to the Saudi regime. According to Will McCants, a counterterrorism expert and former senior State Department advisor, the so-called Islamic State in particular would not have existed “in the configuration that we see them today.” The group justifies its violence by recourse to Wahhabi tenets and teachings that “have been pushed by the Saudi state.”

Given this history, the single most important step the United States can take toward eliminating extremism would be to combat the supremacy of Saudi ideology worldwide by cutting off the Saudi money that funds it. It’s vital, too, that America takes action to buttress local Muslim cultures and traditions. Otherwise, a generation of Muslims risks falling under the sway of a pernicious ideology that presents itself as authentic and absolute, and humanity risks losing a true and full record of its rich, Islamic past. Finally, the United States must address the ignorance of governments and individuals who quite innocently (perhaps) perceive the Saudis as Islam’s legitimate arbiters. Whether they realize it or not, they are part of the problem as well.

My indignation over Saudi influence and homogenization only increased as I continued to travel as special representative to Muslim communities.

I saw evidence of Saudi influence in Kazakhstan and Timbuktu, in Burma, and the Balkans. In Pakistan, Senegal, Guyana, and Indonesia, leaders told me that they understood Saudi Arabia’s true motives and were only superficially playing along. They didn’t want to accept Saudi money at all, but they had no choice. They were desperate for funds for schools, clothes, and even health care. They thought they could control the impact of Saudi ideology, preventing it from taking root in the culture. What emboldened them was the notion that Wahhabi traditions were foreign to their local culture and thus something that would never resonate with local people. They were wrong. As I saw myself, Islam was in the process of becoming homogenized, rendered more synonymous with Wahhabism and Arab culture generally.

Rather than holding the Saudis responsible for redressing a longer-term, ideological problem, the United States has opted to secure their cooperation on short-term issues and to defer to them as the supposed arbiter of all things Muslim simply because they are the self-proclaimed custodians of Mecca and Medina. The United States has treated the Saudis the way it does the Vatican, assuming that they have the right to tell all Muslims what to do. But the Saudis don’t have this right. Ideology matters. The Saudis might be helping the United States fight terrorist groups, they might be helping to counter the influence and power of Iran in the region, and they might be buying billions of dollars of weapons systems and commercial products from America, but they are simultaneously taking actions that feed extremism and help it to grow. U.S. tolerance of their behavior signals to other Gulf countries—the United Arab Emirates, Qatar, and Kuwait—that they can get away with their own, lesser support for extremism.

If we allow the Saudi-funded monolithic view of Islam to prevail, extremists will continue to find fertile ground for recruitment in local communities. Indeed, when the so-called Islamic State is defeated, other extremist groups will crop up in their place with equally harsh, unyielding ideologies, because the roots—the identity crisis that prompts youth to look outside their communities for answers—will remain.

Farah Pandith is the former (and first) Special Representative to Muslim Communities a the US Department of State and author of How We Win. Twitter: @farah_pandith