Chinese Muslims are struggling to follow their faith amid a growing crackdown.

On a Friday evening, the call to prayer sounds throughout Mamichang, in southwest China, calling worshippers to the old mosque next to the village square. It sounds five times every day, each time drawing these devout Muslims through the square and past a Chinese flag and meter-high characters in traditional script: 愛國愛教. “Love your country, love your religion.”

After prayer, a handful of those men wind their way back through Mamichang’s narrow alleyways, a labyrinth of mud-brick walls that finally opens up into a large courtyard lined with cars and motorcycles. There, under an empty sky and an unfurled Chinese flag, they roll out three royal blue carpets, each one 20 feet long. The 12 men and one little girl slip off their shoes and face westward toward Mecca. Adjacent to the courtyard is their “house mosque,” a nondescript residential building with doors chained shut and sealed by official tape that reads “Ethnic and Religious Affairs Bureau.”

On a Friday evening, the call to prayer sounds throughout Mamichang, in southwest China, calling worshippers to the old mosque next to the village square. It sounds five times every day, each time drawing these devout Muslims through the square and past a Chinese flag and meter-high characters in traditional script: 愛國愛教. “Love your country, love your religion.”

After prayer, a handful of those men wind their way back through Mamichang’s narrow alleyways, a labyrinth of mud-brick walls that finally opens up into a large courtyard lined with cars and motorcycles. There, under an empty sky and an unfurled Chinese flag, they roll out three royal blue carpets, each one 20 feet long. The 12 men and one little girl slip off their shoes and face westward toward Mecca. Adjacent to the courtyard is their “house mosque,” a nondescript residential building with doors chained shut and sealed by official tape that reads “Ethnic and Religious Affairs Bureau.”

Members of the house mosque subscribe to a different sect of Islam and so choose to worship separately from the officially registered and government-approved mosque in the village square. In late December, police closed down their house mosque, and tonight, one week later, government officials have forced eight of the men to worship at the registered mosque—and forced the registered mosque to welcome them. Their duty to the state complete, they’ve now come to perform their duty to God; their prayers begin again. For these Hui Muslims, loving one’s country and loving one’s religion is increasingly complicated.

With re-education camps for as many as a million Uighur Muslims in Xinjiang province, demolition threats for a Hui Muslim mosque in Ningxia, and the closing of Protestant “mega-house churches” in Beijing, Chengdu, and Guangzhou, the Chinese Communist Party is limiting religious freedoms across the country. The campaign hit a formal milestone on Jan. 5, when China passed a five-year plan to Sinicize Islam.

The news came a week after police raided and sealed off so-called house mosques in Mamichang and two other villages in rural Yunnan, and violent videos of the raids leaked internationally across Twitter and other social media platforms. A series of interviews in Mamichang and Huihuideng, where two of the raids took place, reveal a state determined to maintain social stability and worshippers torn between their love of God and country. Or, as the party would say, their love of country and God.

“There should be no Chinese influence in Islam,” one house mosque member told me, declining to give his name. He and fellow adherents advocate a return to traditional Islamic practices prior to foreign influence, and they reproach Chinese Muslims for going astray. (His descriptions align with the Salafi movement, though he himself did not use that term.) “Our prayer rituals are different than in the registered mosque,” he continued, “so we have been meeting separately for 13 years.” In China, citizens need state approval to hold religious activities. These men have applied numerous times over the years for official approval to meet, but their application has been ignored. “They want us all to meet together for tuanjie,” or unity, he told me. The wall behind him—the one they face when praying toward Mecca—reads in red: “Resolutely maintain ethnic unity, promote social harmony and stability.” 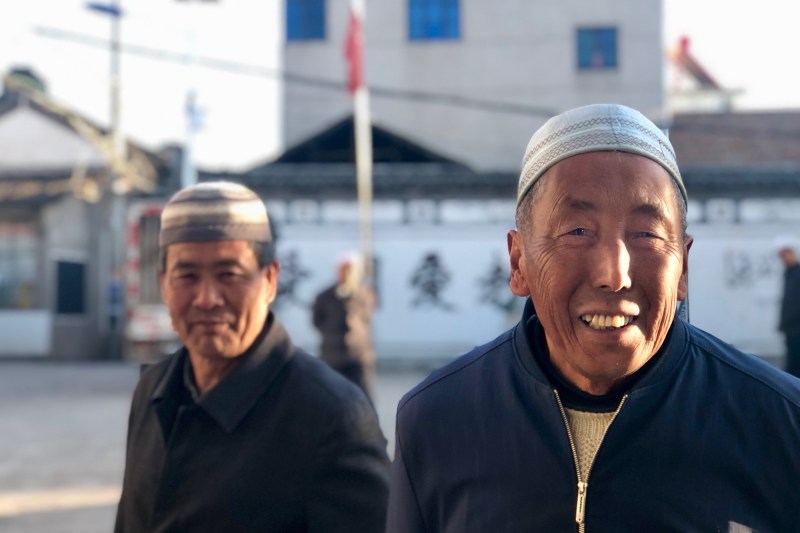 A Hui Muslim smiles for a photo after evening prayers at the government-approved mosque in Mamichang village on Jan. 4. The characters behind him read: “Love your country, love your religion.” (Liwei Wu for Foreign Policy)

The party, meanwhile, worries about religious factions. “You know about Iraq, right? And Syria?” Yang Yanhui, a local, asked me in the village square, his voice at once animated and matter-of-fact. “That’s why they’re at war. This sect attacks that sect, that sect attacks this sect,” he continued, emphasizing each “attack” (打) with a guttural drop in his voice. Yang’s father had been in village leadership, and he spoke with an air of authority. “The Communist Party is always taking cautionary measures to prevent things from getting out of hand.”

China has a history of religious violence—and Muslims are no exception. After a massacre of Muslims in 1856 amid the chaos of the wider, Christian-inspired Taiping rebellion, the Panthay rebellion of Muslims against the Qing Dynasty established an independent kingdom in Dali, Yunnan, until its fall in 1872. More recently, in 1975, Hui Muslims in Shadian, Yunnan, took over military barracks and arsenals in response to the government closing mosques and burning religious books. Hui Muslims said they were protecting their constitutional rights as Chinese citizens, whereas the party deemed it a separatist military movement. The Chinese army was deployed and, somewhere between several hundred and several thousand Hui were left dead in its wake. But these official responses of the government were more reactionary than calculated.

Now the party’s cautionary measures are becoming more coordinated and more concrete—and they’re coming from the very top. In 2016, President Xi Jinping highlighted the need to Sinicize China’s five official religions—Islam, Catholicism, Protestantism, Buddhism, and Taoism—in order to “actively guide them to adapt to socialist society.” At the 19th Party Congress in 2017, Xi reinforced his intentions: “We will fully implement the party’s basic policy on religious affairs, insist on the Sinicization of Chinese religions, and provide active guidance for religion and socialism to coexist.” And Xi is making marked progress.

In January, China passed the five-year plan to Sinicize Islam at a meeting with representatives from Islamic associations from eight different provinces and regions. Few details have been released about the plan, but it is clear that shaping doctrine and traditions to conform to party objectives is central. Similar plans to Sinicize Protestantism and Catholicism in China have already passed, and swift implementation is expected. In Xinjiang, anti-religious efforts have been incorporated into a massive regional crackdown, including the mass detention of Islamic minorities.

The Communist Party’s ability to implement this has been enhanced by a massive restructuring unveiled in March last year that significantly strengthened its power over state organs. Religious affairs, which were previously co-managed by the State Administration for Religious Affairs and the party’s United Front Work Department, are now completely under the latter. The former has been dissolved, which means all religious organizations now report directly to the Chinese Communist Party. You Quan, the head of the United Front, emphasized: “The party’s leadership over religious work must be upheld.” 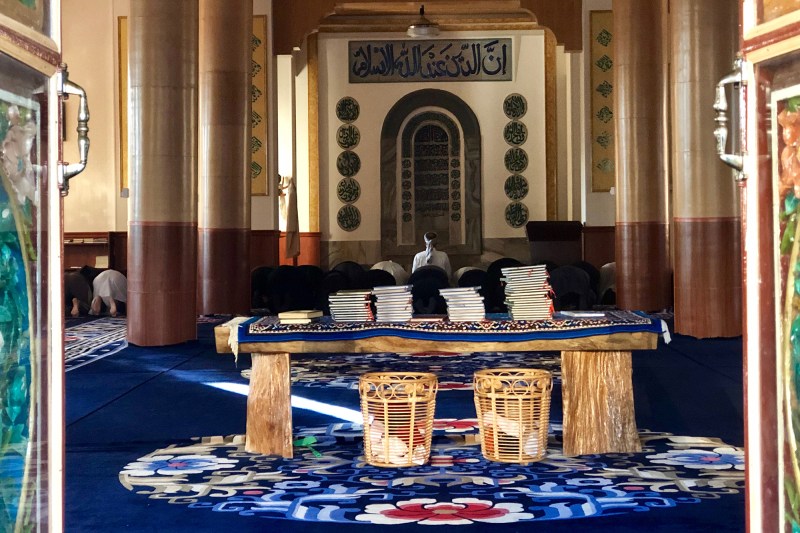 Hui Muslims gather for prayer at the registered mosque in Mamichang village on Jan. 4. (Liwei Wu for Foreign Policy)

“It worries us a little bit,” Yang said, “Just a little bit.” He dropped his voice to a whisper. “Policy is really tight in Xinjiang, but these last three years it’s started to tighten here too.” Hui children used to attend religious education at the mosque after school and on weekends and holidays. “This year the Communist Party forbade it,” he said, though two young boys I talked with admitted they still secretly attend classes. It seems that for all Muslims, not just those in house mosques, it will be increasingly challenging to avoid Chinese influence in their worship.

The Communist Party’s antagonism toward some religious expressions is unsurprising—it is, after all, based on Marxist-Leninist ideology and officially atheist. But China previously found it more useful to co-opt or coerce religion than to suppress it outright. Recent shifts toward the Sinicization of religion, however, are less about suppressing religion and more about limiting foreign influence.

According to Ian Johnson, a New York Times contributor and the author of The Souls of China, the government wants to limit the Abrahamic faiths that are officially recognized in China, that is, Islam and Christianity, because it sees them as too influenced by foreign ideas and trends—though Islam has a history of over 1,000 years in China, and Christianity has had a permanent presence for more than 400 years, Johnson noted. To that end, China released new regulations in 2017 on religious organizations and their activities, including an explicit ban on any unregistered religious activities. New laws and regulations always have a gradual roll-out in China so the recent crackdowns are merely enforcement of those 2017 regulations. The “soft opening” is over,  which Johnson concludes will lead to increasing conflict. “You will have an even more pacified Islam that is moribund and controlled by the state, and a search for more authentic religious experiences through unofficial churches. By using more force to increase stability, the government is achieving the opposite effect,” he told Foreign Policy

In Mamichang, the men finish their prayers next to the chained house mosque as the sun’s glow fades in the western sky. “We don’t know what we’ll do in the future,” one man tells me while the others roll up the royal blue carpets. They have hung a red banner on the wall behind them that quotes Xi Jinping in large white characters: “Our people have faith, our country has power, our nationality has hope.” “We love our country,” he tells me, his voice calm yet resigned. “We can only figure out one problem at a time. For now, we will just meet outside and wait and see.”

Liwei Wu is a pseudonym for a Western academic working in China.

Allowing the Games to happen alongside an ongoing genocide would be a disaster.

Look at what happened with the Soviet threat in the Cold War.