On April 30, something historic will happen in Japan. Sitting Emperor Akihito will step down and relinquish his title. His elder son, Crown Prince Naruhito, will take the throne. The transition will mark the first imperial succession in modern Japanese history that is not the result of a death. Akihito first made his desire to retire public during a rare video message in the summer of 2016. He noted that his advanced age (he is currently 85 years old) has made it difficult for him to fulfill his responsibilities. The next year, Japan’s Diet passed a bill permitting the emperor to abdicate.

Officials and representatives from over 190 countries have been invited to mark the occasion—and the vast changes that have transformed Japan since 1989, when Akihito became emperor after his father, Emperor Hirohito (known posthumously as Emperor Showa), died. When Akihito took the reins, Japan’s economy was the second-largest in the world behind the United States’. While the economy fell from that peak during his tenure, the Japanese people remained largely wealthy—with a greater quality of life as the years passed by. Life expectancy, for example, remains among the highest in the world.

Akihito rose to the throne at a time when it was still unclear what kind of role the emperor should play. “Ever since my accession to the throne,” he said in his 2016 video address, “I have carried out the acts of the emperor in matters of state, and at the same time I have spent my days searching for and contemplating on what is the desirable role of the emperor, who is designated to be the symbol of the state by the Constitution of Japan.”

It was clear all along, of course, that he’d be a different type of emperor than his father. Hirohito, who had been emperor during and after World War II, was reviled by many for his country’s wartime actions. But especially before and during the war, he was seen as nearly a god. 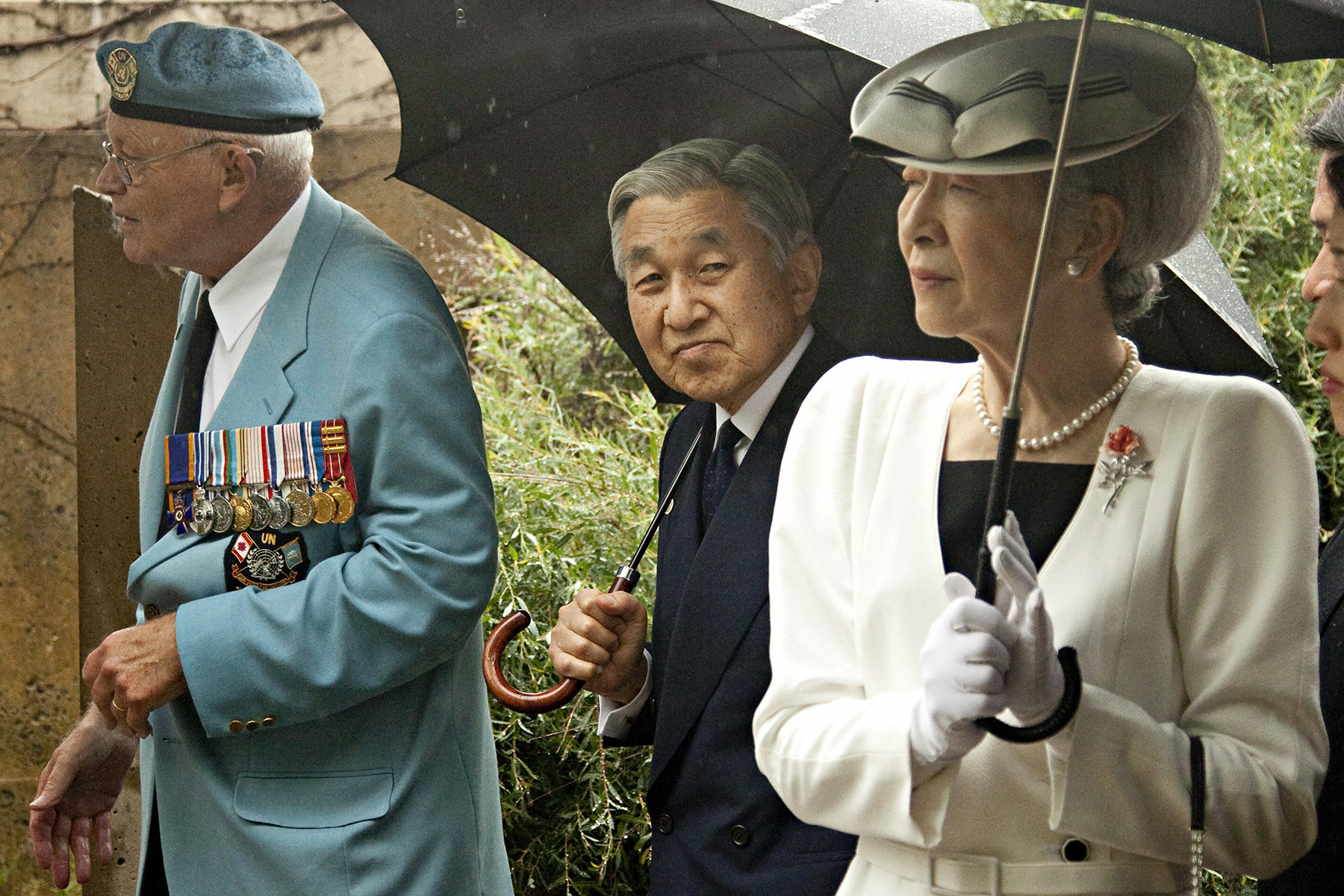 Emperor Akihito and Empress Michiko of Japan are accompanied by retired Col. John Gardam, the curator of the peacekeeping monument in Ottawa, which commemorates Canada’s role in international peacekeeping, on July 7, 2009. (David Boily/AFP/Getty Images) 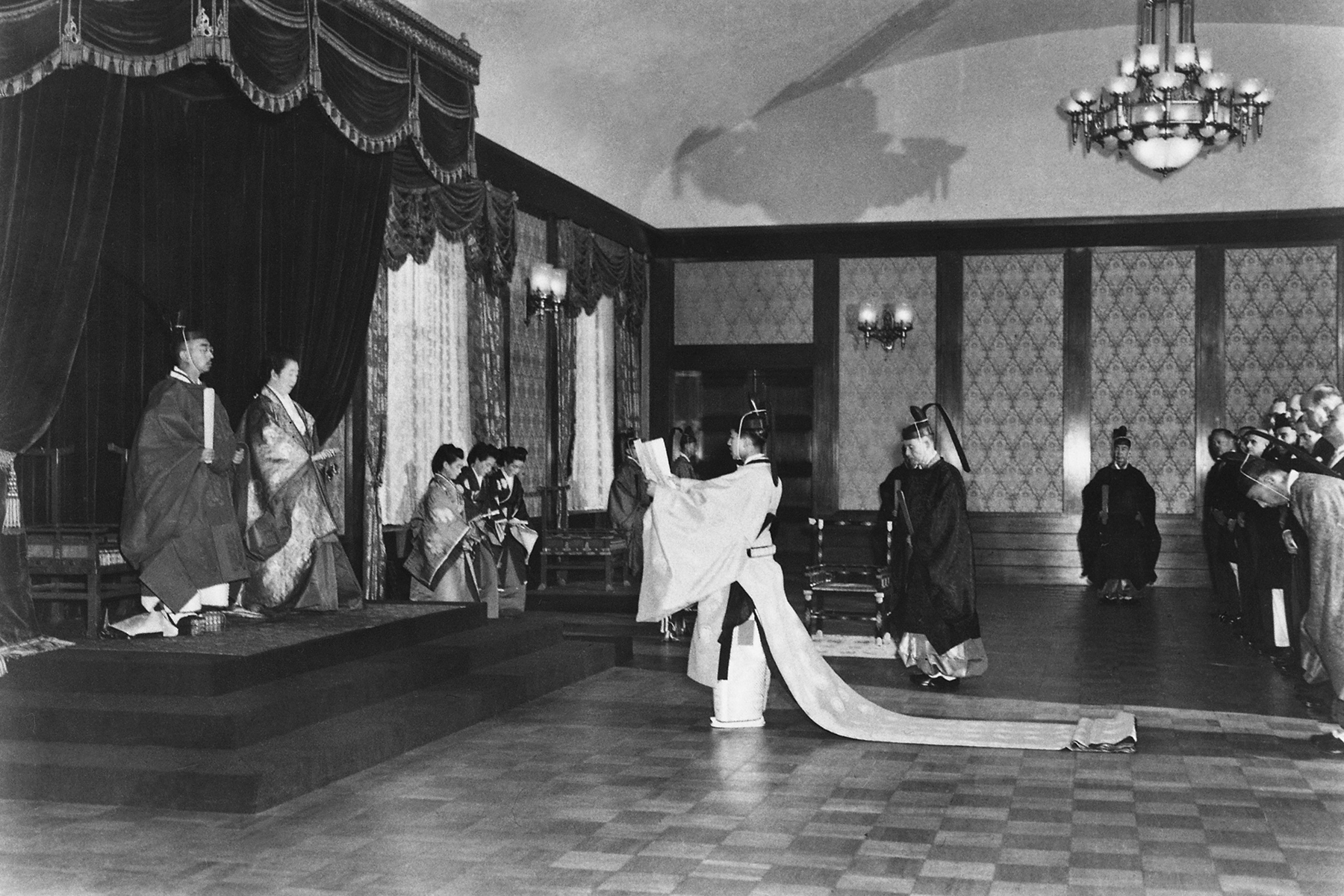 Japan’s Akihito, center, attends a ceremony proclaiming him crown prince and the heir apparent in front of Emperor Hirohito and Empress Nagako in Tokyo in November 1952. (Jiji Press/AFP/Getty Images) 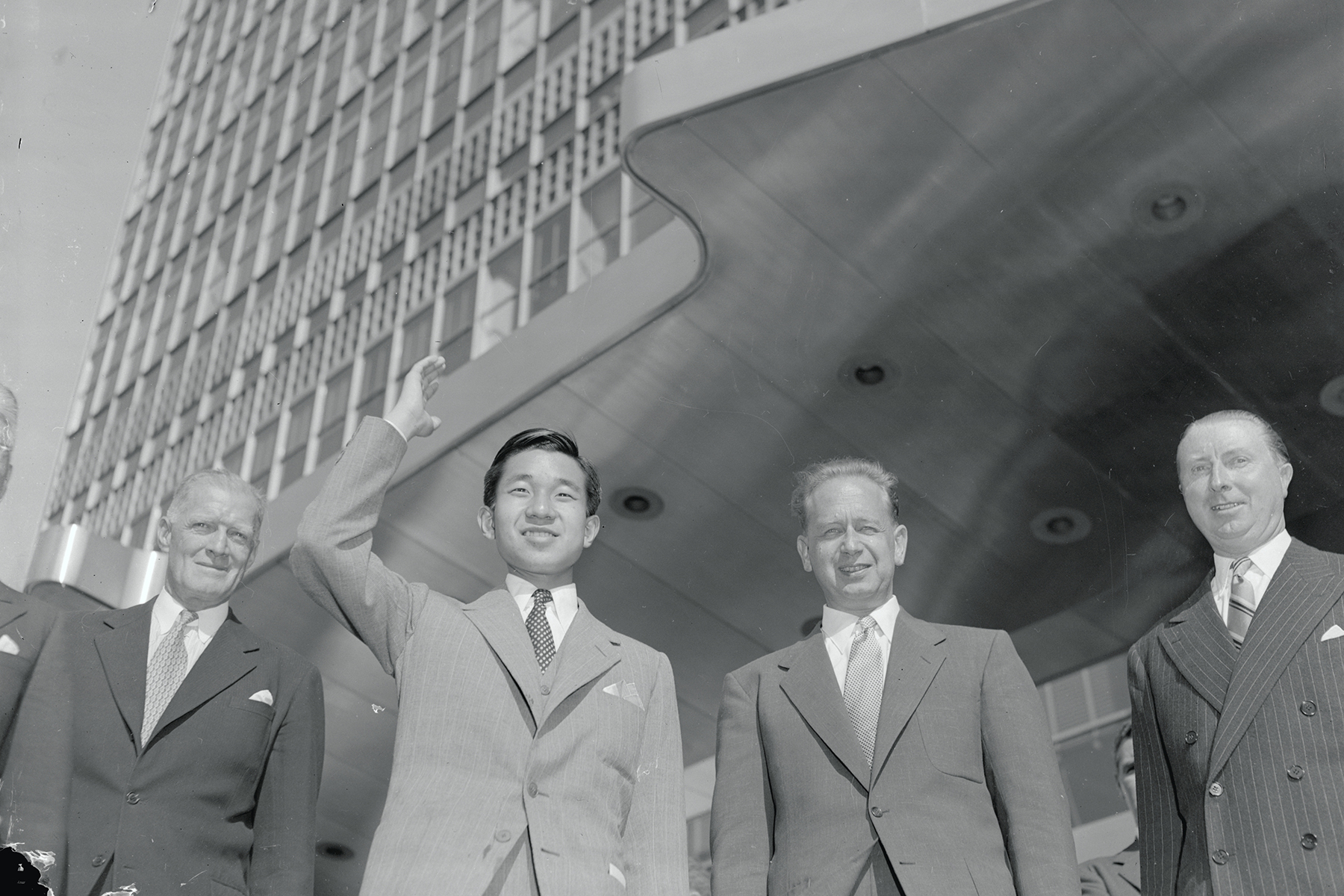 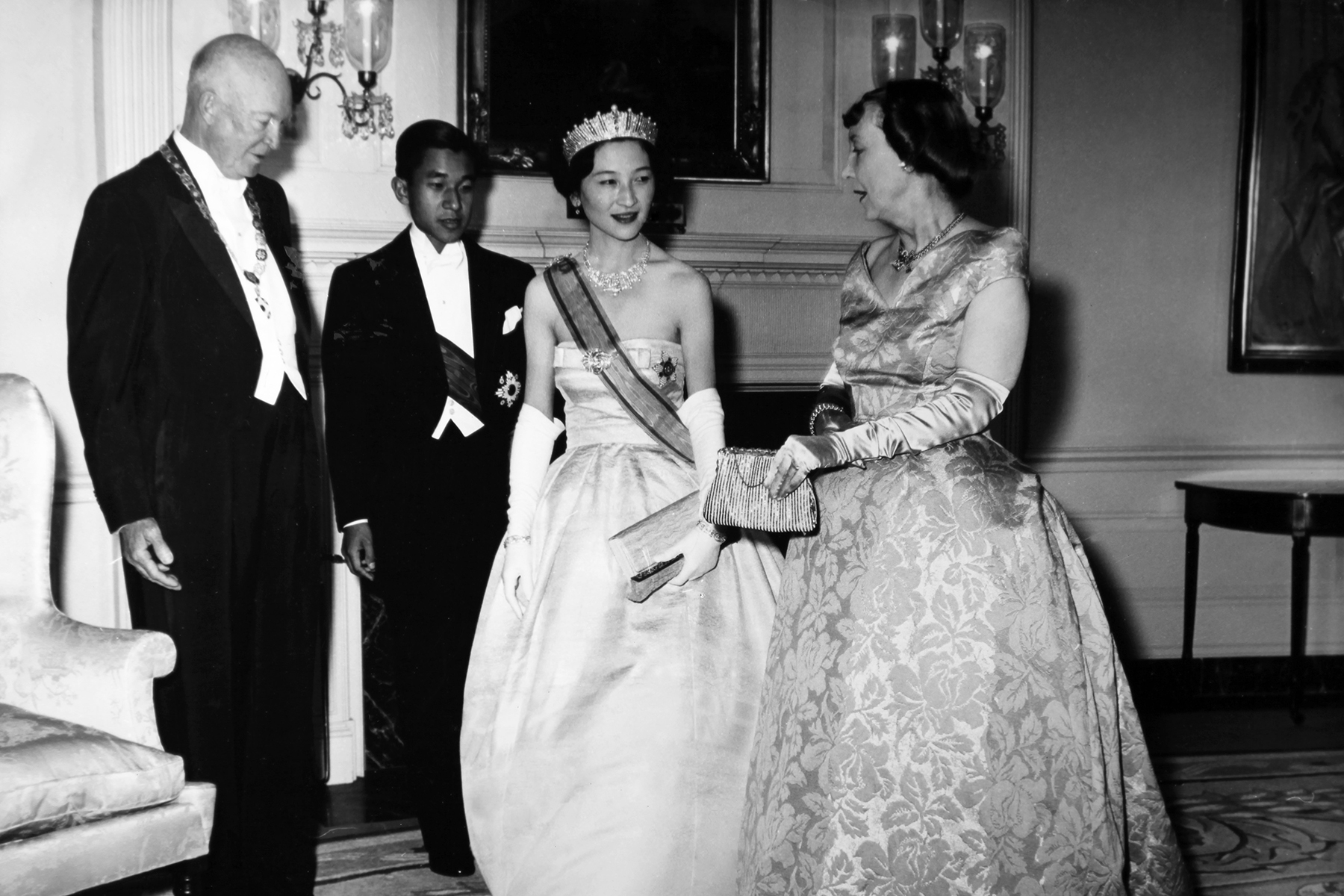 Crown Prince Akihito and his wife, Michiko, are welcomed at the White House for a reception with U.S. President Dwight D. Eisenhower and first lady Mamie Eisenhower on Sept. 29, 1960. (Keystone-France/Gamma-Rapho via Getty Images) 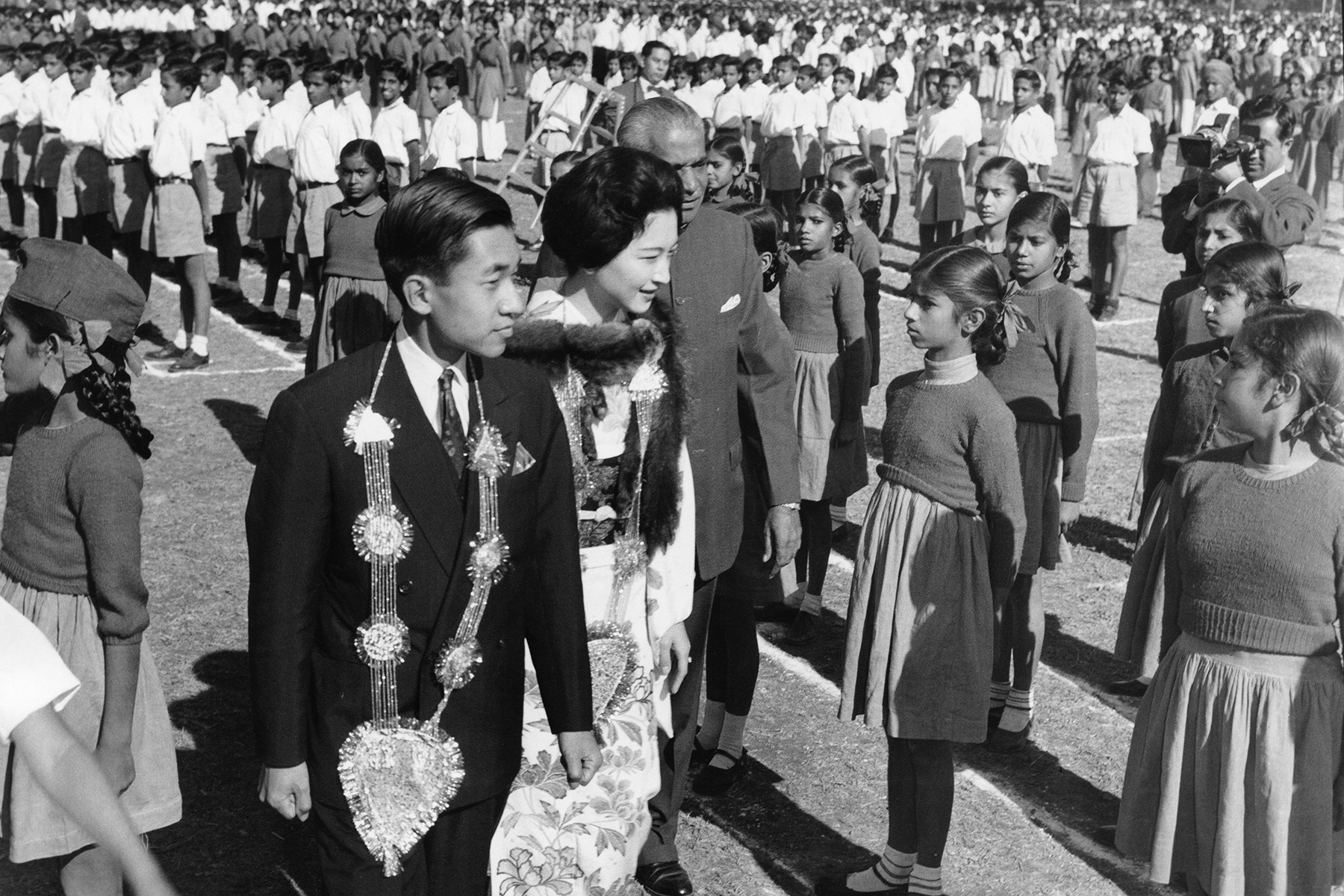 Japan’s Crown Prince Akihito and Princess Michiko walk past children during a rally in New Delhi on Nov. 30, 1960. (AFP/Getty Images) 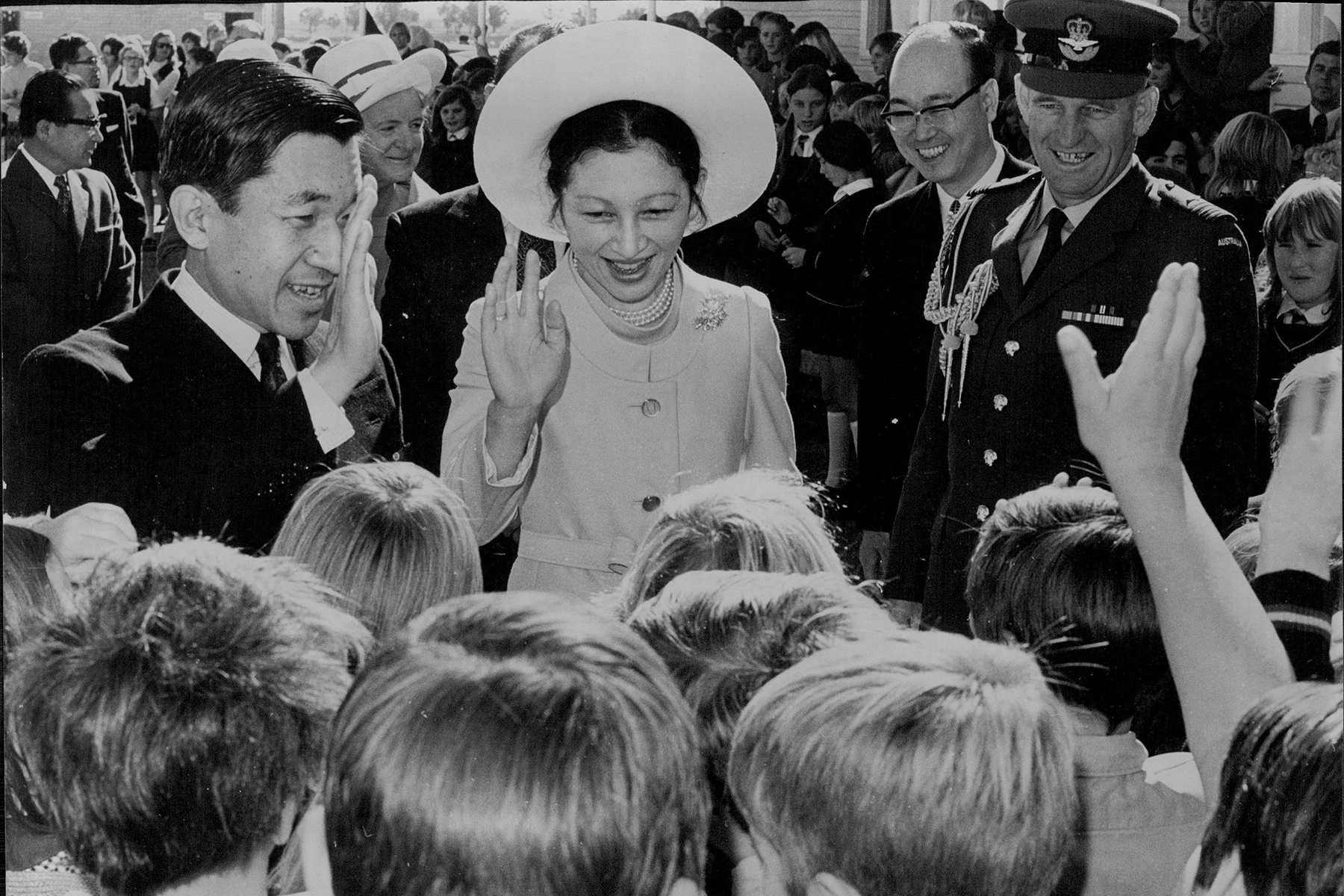 Japanese Crown Prince Akihito and his wife, Princess Michiko, are greeted by hundreds of schoolchildren in Cowra, Australia, on May 9, 1973. The royals laid a wreath at the Japanese War Cemetery, outside the town. (Peter John Moxham/Fairfax Media via Getty Images) 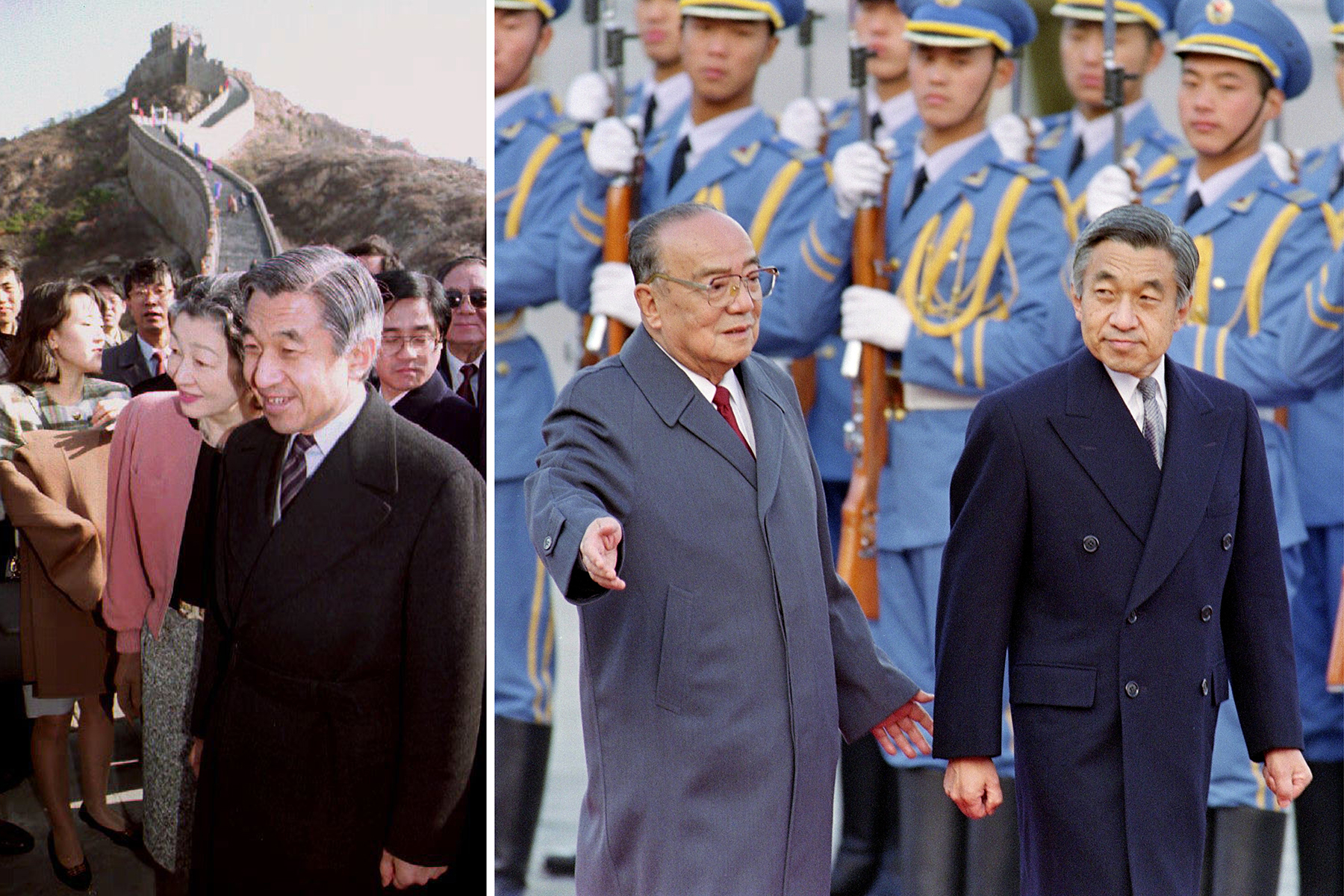 Left: Japanese Emperor Akihito and Empress Michiko tour the Badaling section of the Great Wall, northwest of Beijing, on Oct. 24, 1992. Right: Chinese President Yang Shangkun and Emperor Akihito review the honor guard in front of the Great Hall of the People in Beijing on Oct. 23, 1992. (Mike Fiala/AFP/Getty Images) 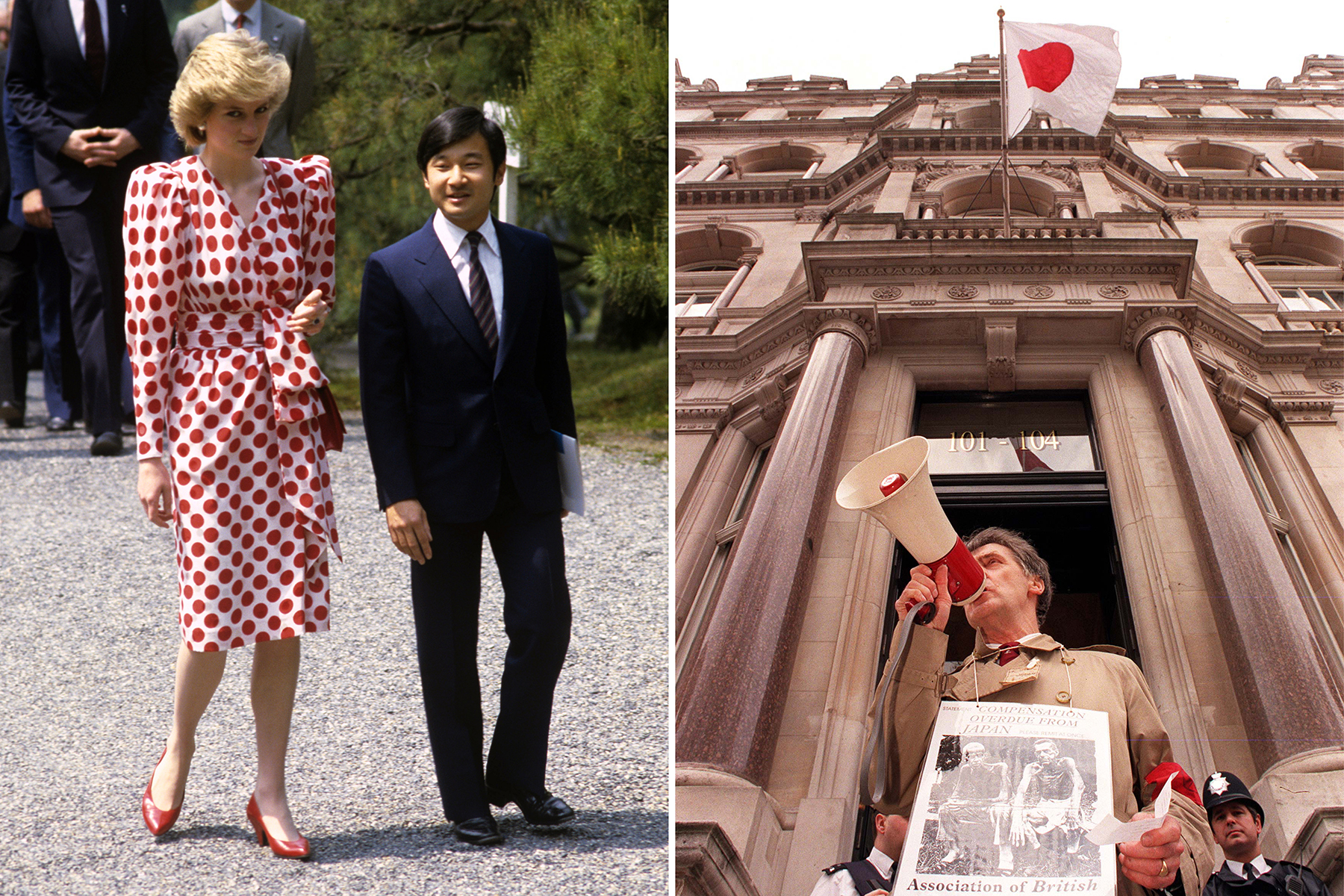 Left: Diana, princess of Wales, walks with by Prince Naruhito, the 26-year-old son of Japan’s Crown Prince Akihito, at Shugakuin, Kyoto, on May 9, 1986. Right: Ron Bridge, of the Association of British Civilian Internees Far East Region, protests against the upcoming visit of Emperor Akihito to Britain outside the Japanese Embassy on April 8, 1998. (PA Images via Getty Images) 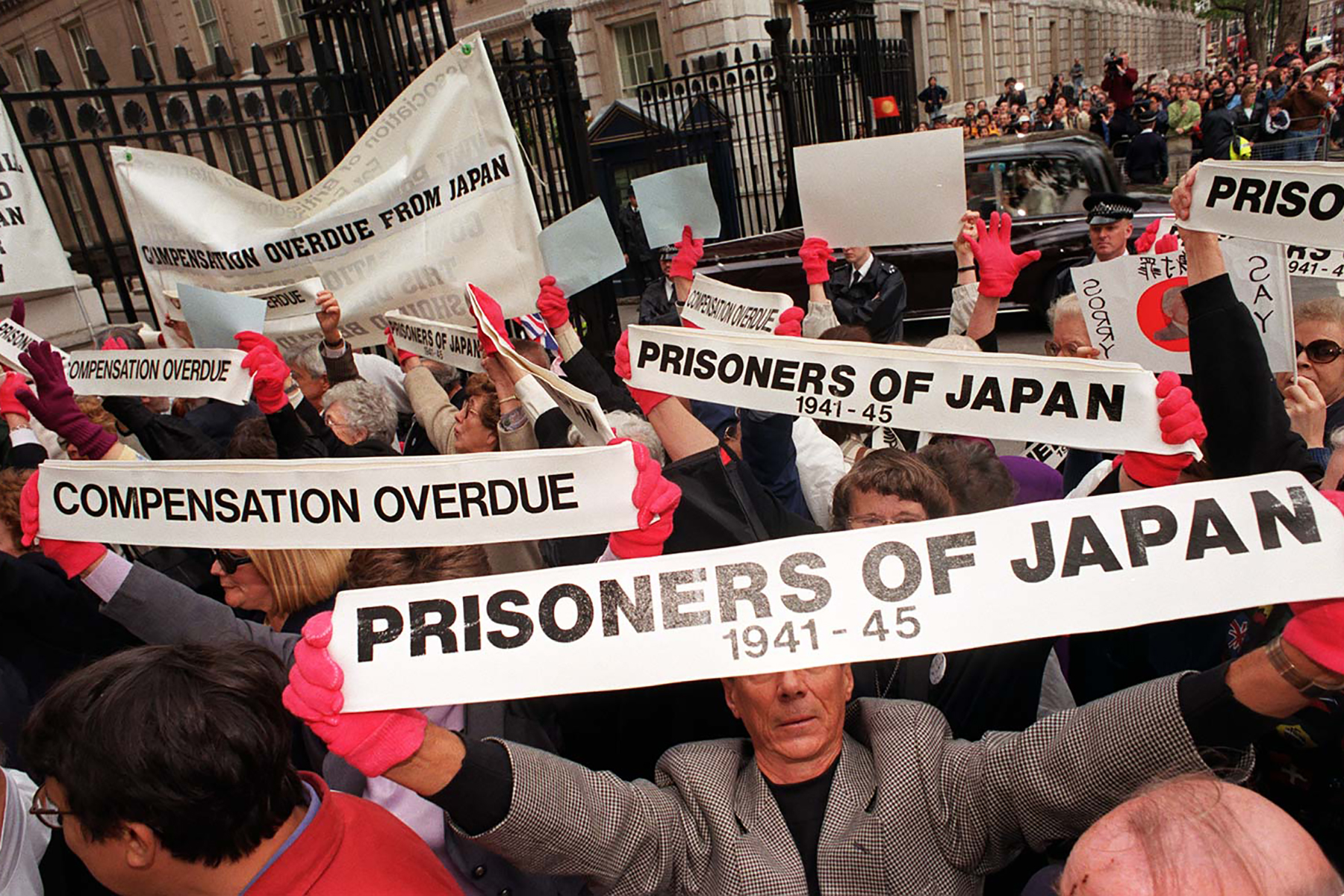 Former prisoners of war turn their backs on Emperor Akihito of Japan as he is driven past them through the gates into Downing Street in one of the queen’s official cars during his state visit to Britain on May 28, 1998. (Suzanne Hubbard/PA Images via Getty Images) 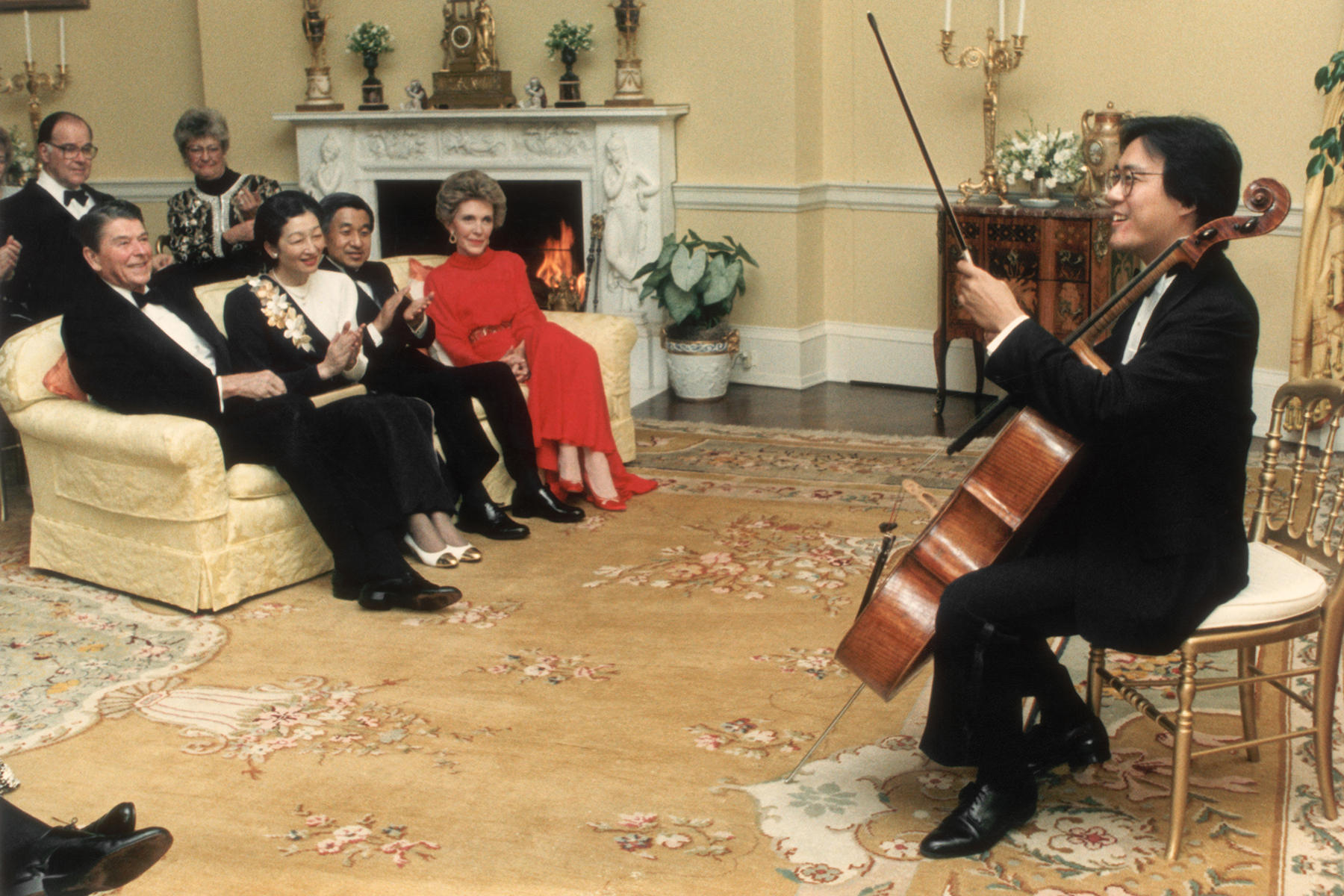 The cellist Yo-Yo Ma entertains Emperor Akihito and Empress Michiko of Japan during their visit with U.S. President Ronald Reagan and his wife, Nancy Reagan, at the White House on Sept. 11, 1987. (Jean-Louis Atlan/Sygma via Getty Images) 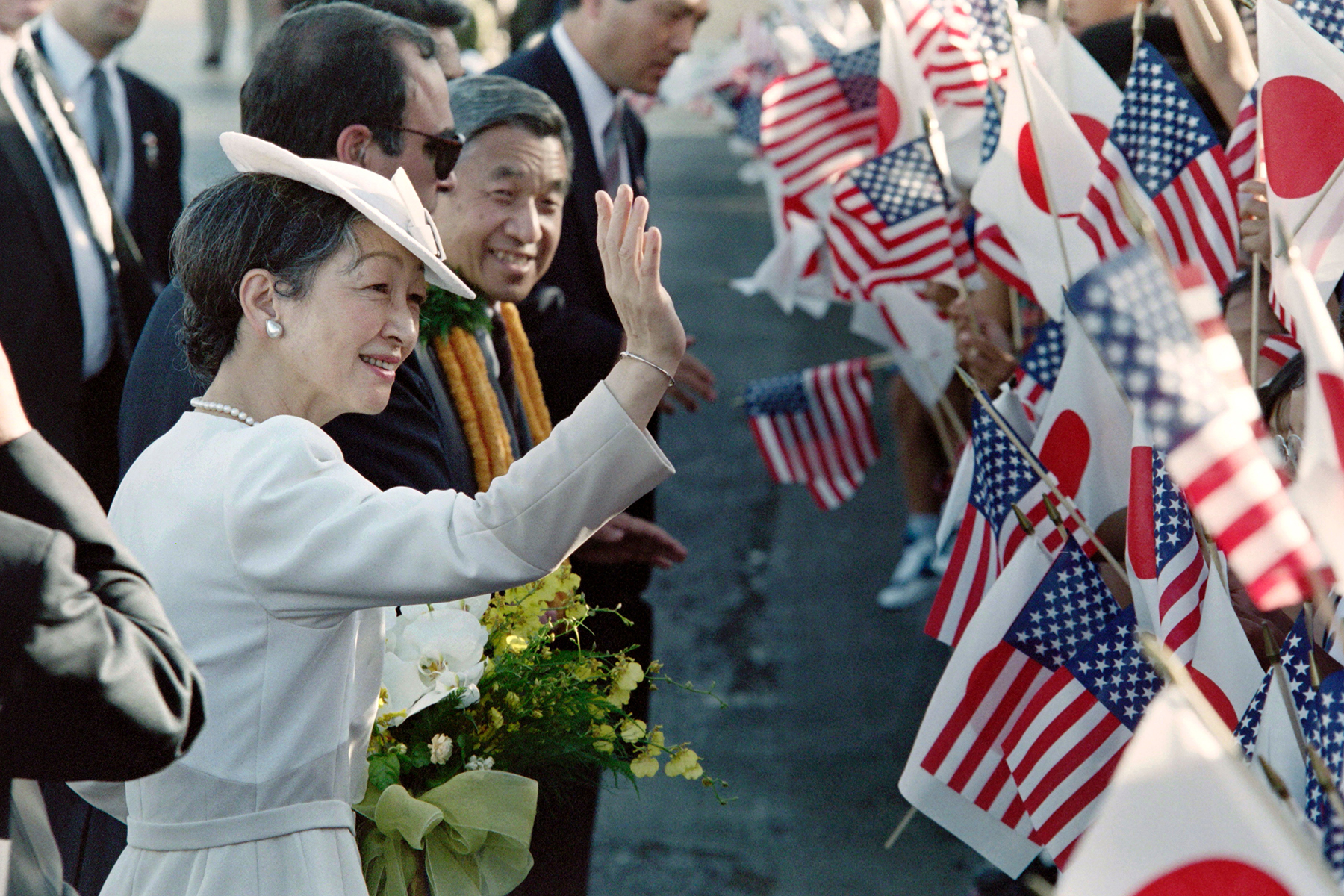 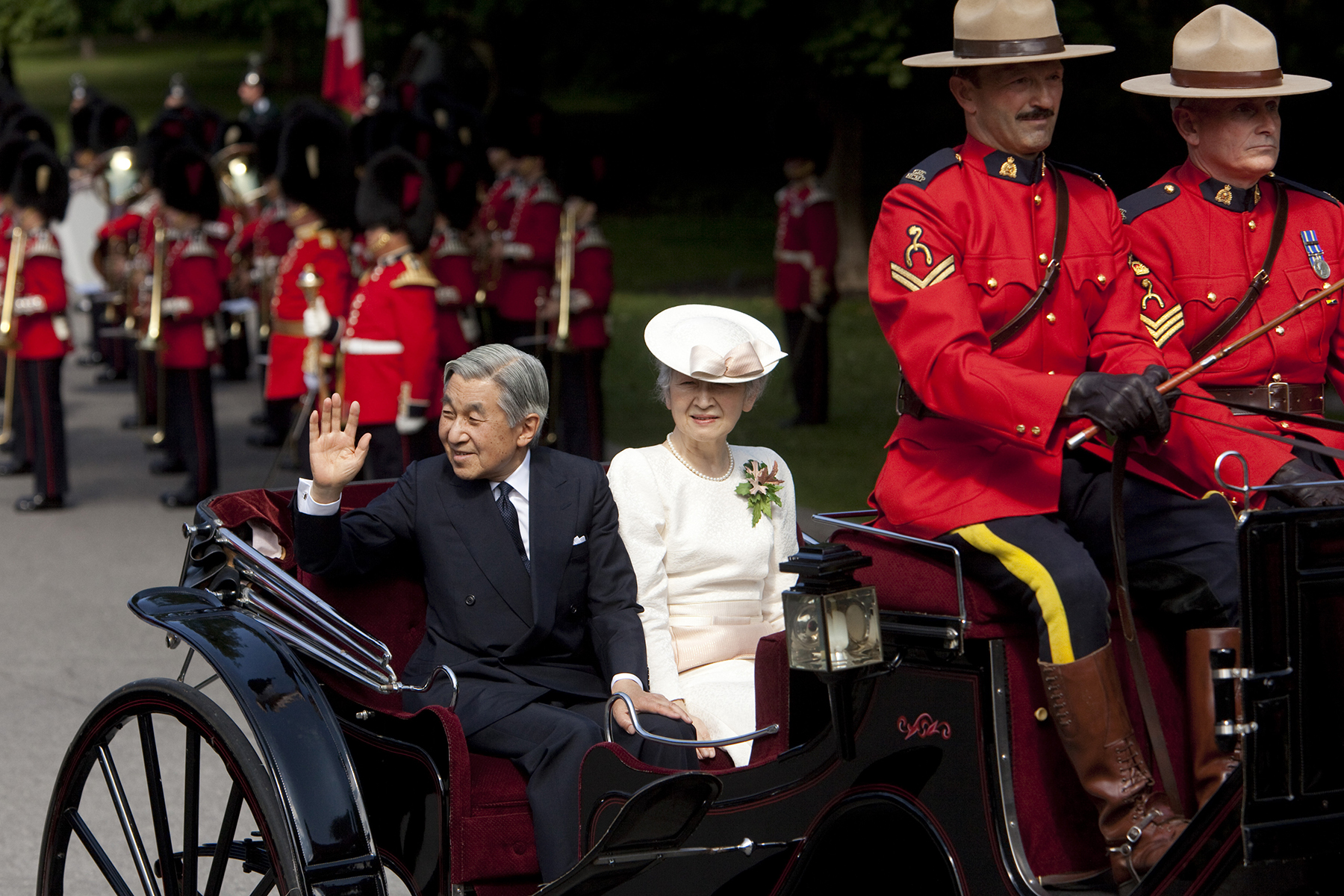 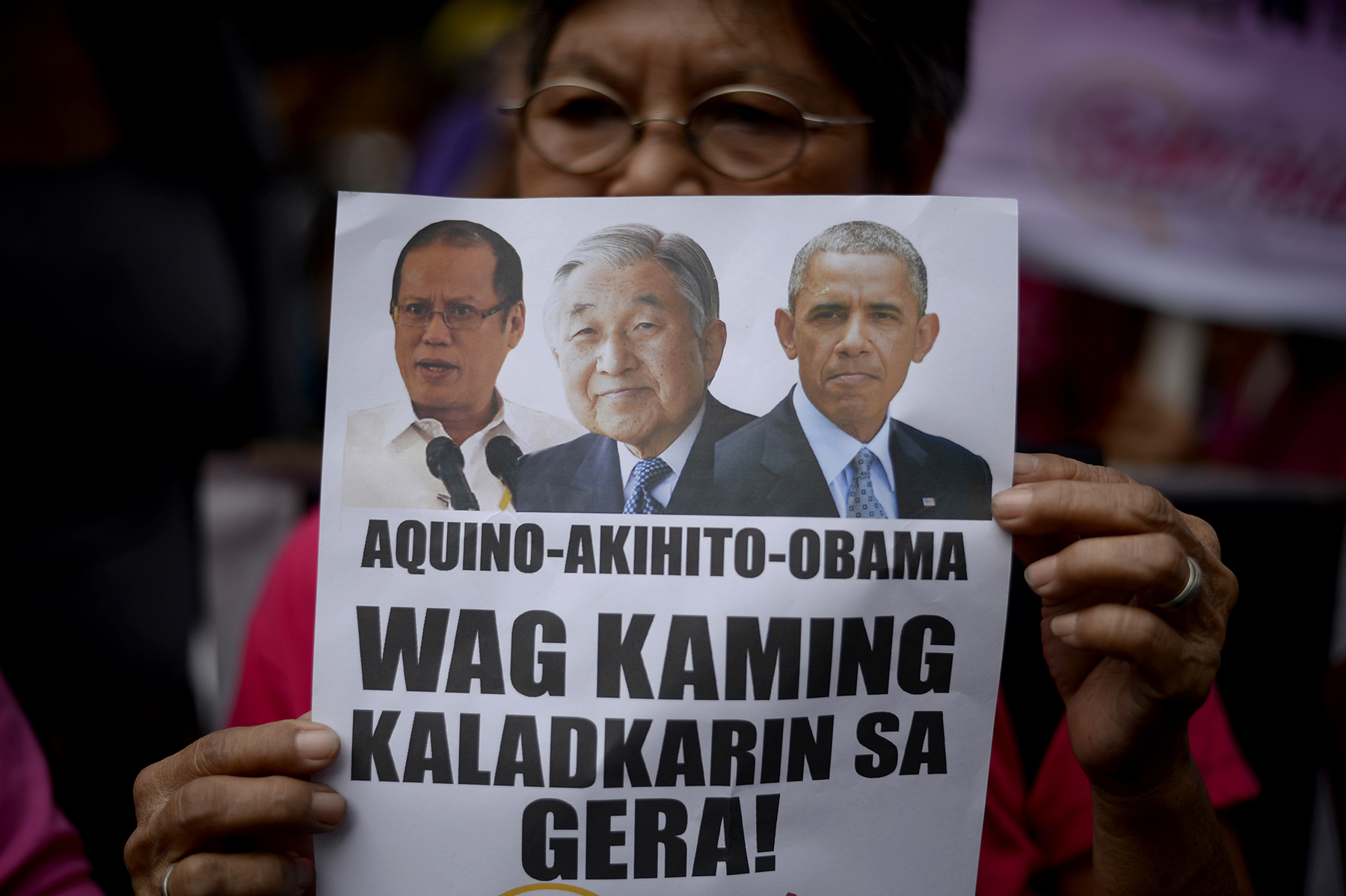 An activist holds up a placard with images of Philippine President Benigno Aquino III, Japan’s Emperor Akihito, and U.S. President Barack Obama reading “Don’t drag us into war,” at a protest near the Malacanang Palace in Manila, where the emperor met the Philippine president on Jan. 27, 2016. (Noel Celis/AFP/Getty Images) 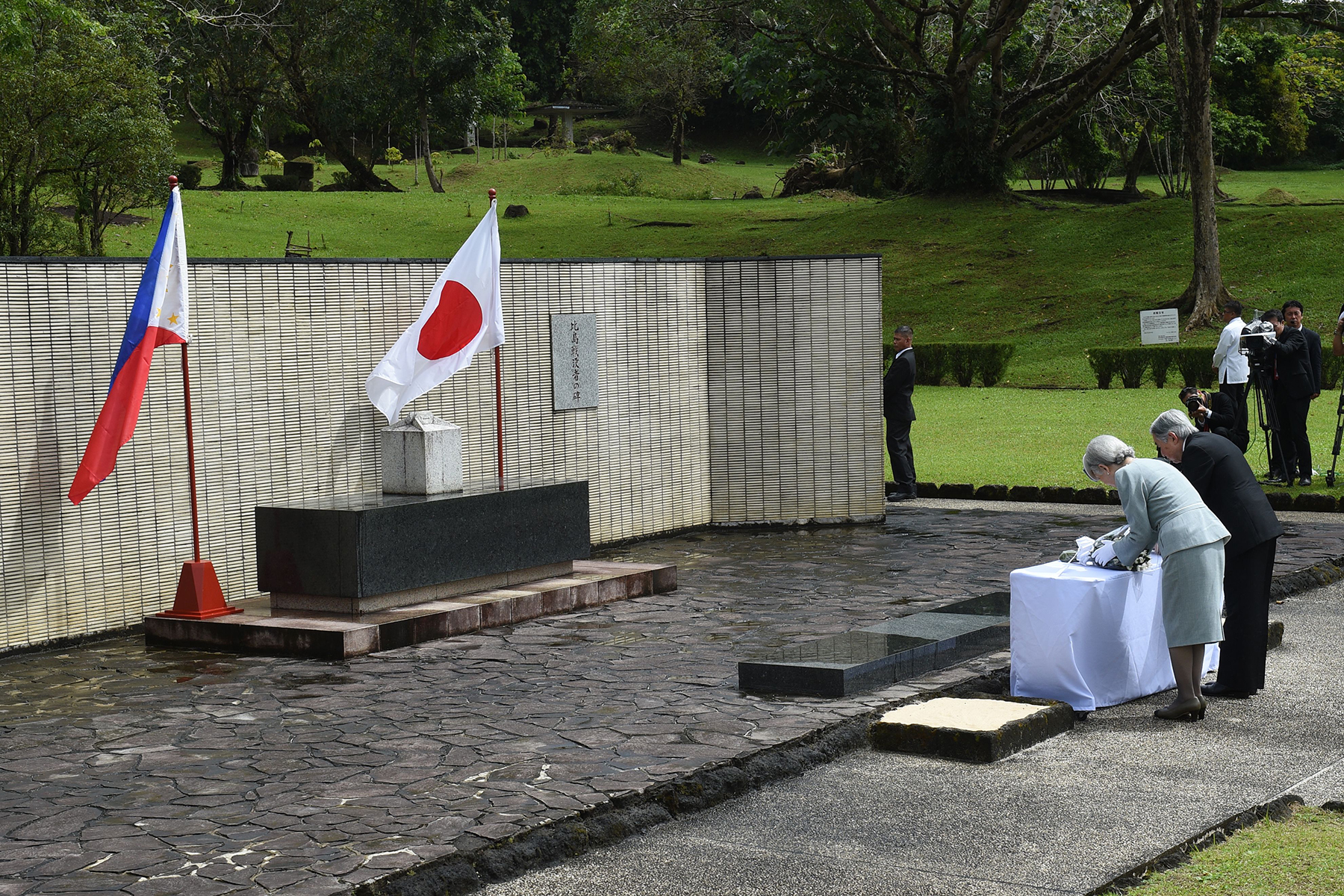 Japanese Emperor Akihito and his wife, Empress Michiko, offer flowers during a visit to a Japanese memorial garden in Caliraya, south of Manila, during a five-day visit to the Philippines, on Jan. 29, 2016. (Ted Aljibe/AFP/Getty Images)

After the war, the United States had wanted to get rid of the title “emperor” outright. Washington only agreed to keep it thanks to persuasion from Gen. Douglas MacArthur and his aides, who led the U.S. occupation of Japan after the war and argued that maintaining the emperor would be essential to restoring some national morale and rebuilding the country. (Keeping Hirohito, it turned out, was also crucial for ensuring some cohesion in Japan’s intellectual and political class during the ensuing Cold War.) But the deal the United States struck with Japan was simple: The emperor can stay, but only if he is constitutionally disconnected from politics. MacArthur also insisted at the time on having an unprecedented tête-à-tête with Hirohito—something that caused aides in the Imperial Household to balk, citing his deity-like status—and photographing the meeting, as evidence to the Japanese people that the emperor’s role would be different going forward.

Akihito began his reign as Japan was at the peak of its economic boom and as the Cold War was coming to an end.

And it was. The emperor was reduced to a symbolic unifier of a state that was still reeling from a tremendous defeat in a war in which it lost 3 million people (including military and civilian deaths). By the time Akihito came to the throne, the country had healed many of those wounds and had re-emerged with a thriving business culture. Indeed, he began his reign as Japan was at the peak of its economic boom and as the Cold War was coming to an end. That proved propitious for the young emperor, who was able to focus his rule on deepening Japan’s friendships with other nations, many of which had been former adversaries during the war period. In 1992, he even visited Beijing and expressed sadness over the horrors of the war. The visit was well regarded in China, despite some critics calling for a more forthright apology, and helped set the stage for a mostly positive bilateral relationship over the following decade.

Akihito largely kept up his role as unofficial international ambassador for Japan throughout his reign. He and his wife made goodwill visits in 2009 to the United States, where they paid respects at the National Memorial Cemetery of the Pacific in Hawaii, and Canada. In the coming years, they also toured India, Palau, the Philippines, and Vietnam as a way to celebrate friendly relations and take a moment to commemorate the past tragedies of the war. More recently, he met with Chinese Premier Li Keqiang in Tokyo and celebrated the 40th anniversary of the Japan-China Treaty of Peace and Friendship.

Although the emperor has been criticized for failing to visit South Korea—a country that suffered significantly during Japan’s annexation—he has made some efforts to heal relations. Akihito has repeatedly shown remorse over the war period and even signaled this directly to South Korean President Roh Tae-woo in 1990, stressing the “deepest regret” he felt about the period during which Japan annexed Korea.

As Japan’s international relations flourished during Akihito’s reign, the country went through some dark times at home. Breaking with the tradition of shielding the emperor from the public, he provided hope and inspiration for a country that faced devastating natural disasters, including the Great Hanshin earthquake in 1995 and, more recently, the Great Tohoku earthquake in 2011—tragedies that resulted in the deaths of more than 20,000 people. After the 2011 earthquake, Akihito made the unprecedented move of making a live television address to the people of Japan, prioritizing national healing over imperial protocol. When the Japanese economic bubble burst and the country went through a so-called lost decade of economic stagnation in the 1990s, he continued to press the nation to look forward and embrace its blessings during his annual New Year’s speeches.

Although Akihito has taken an understated and nonpolitical role, analysts such as Norihiro Kato have increasingly viewed him as skeptical of conservative Prime Minister Shinzo Abe’s efforts to revise Japan’s pacifist constitution so it can field a real army. There are even some suggestions that the timing of the emperor’s abdication may be related to the Imperial Household’s unease with Abe’s determination to push forward on the matter. The emperor has never been direct on this point—but his focused message on pacifism and adherence to the constitution has not been lost on the public. For that and for his gradual removal of traditions that shuttered the royals away from the people, Akihito will go down as the first “public emperor.” His gentle demeanor will also contribute to that legacy.

This February, Akihito noted the importance of peace during his reign, stressing that the very name of the era—Heisei—translates into “achieving peace.” And that is the legacy he will likely pass on to his son. Already, Naruhito has also been an active participant in Akihito’s goodwill visits and has travelled to Vietnam, Thailand, Cambodia, and Laos, among other places over the past decade. The crown prince will likely continue in his father’s footsteps and remain an active presence in fostering good ties with neighboring countries—while remaining nonpolitical.

The Heisei era was transformational for Japan’s imperial system. While the emperor’s role changed in the middle of his father’s reign, Akihito was the first Japanese emperor to fully inhabit a symbolic and nonpolitical role. In doing so, Akihito has helped to build, mend, and nurture Japan’s international relationships and place emphasis on the peaceful orientation the country has taken since the end of the war.

The Fate of the World Order Rests on Tokyo’s Shoulders

Japan was one of the system’s biggest winners, and it is one of the few countries that can save it now.