How Alberta Won the Rat Race

One Canadian province has virtually eliminated its vermin—and shows how others can too.

Along an 18-mile strip of land between the Canadian province of Alberta and its neighbor Saskatchewan, the rat patrol keeps guard. An eight-person team, armed with poison and shotguns, hunts daily for any sign of the rodent invaders.

Along an 18-mile strip of land between the Canadian province of Alberta and its neighbor Saskatchewan, the rat patrol keeps guard. An eight-person team, armed with poison and shotguns, hunts daily for any sign of the rodent invaders.

The Alberta rat patrol checks more than 3,000 farms a year, but it rarely sees an actual rat. Alberta has 4.3 million people, 255,000 square miles, and no rats—bar the stray handful that make it into the killing zone each year. Ever since 1950, a sternly enforced program of exclusion and extermination has kept the province rat-free. Nowhere else in the world comes close; the only other rat-free areas are isolated islands such as the remote British territory of South Georgia.

Public support and education have been key to Alberta’s success. Locals use hotlines (310-RATS or 310-FARM) to report any sign of rodents, though false alarms are common. School programs educate kids about the telltale signs of the invaders. Keeping pet rats is banned and can earn you a fine of almost $4,000.

Across the world every year, mice and rats are estimated to cause nearly $20 billion in damage and wipe out as much as a fifth of the world’s food supply. They’re not just enthusiastic gnawers. They’re also prolific urinators, and rat pee frequently contaminates goods. Rats are thought to have spread the Black Death in the Middle Ages, as they do other viruses today.

Rats arrived in Canada in the 18th century, but geographical isolation kept the invaders from reaching Alberta for a solid two centuries, until the first signs of the rodents started to appear along the border with Saskatchewan after the end of World War II. That’s when Alberta’s anti-rat agenda was born. It wasn’t the first program of its kind: Public involvement in pest control boomed in the 20th century with the spread of disease theory and the motivational push of wartime. 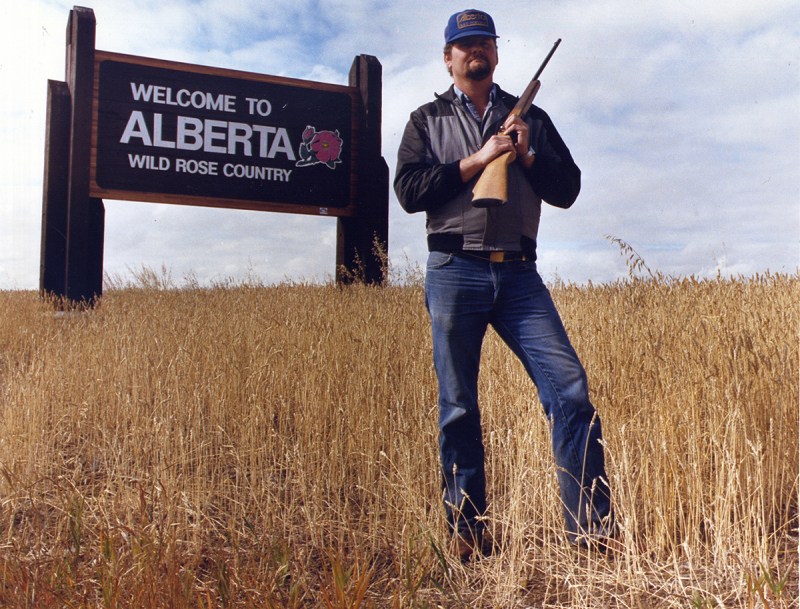 One of the rat control officers who patrolled Alberta’s border with Saskatchewan in 1986. (Calgary Herald, a division of Postmedia Network Inc.)

In Vietnam, for example, the creation of the Hanoi sewer system at the turn of the 20th century saw a boom in rat numbers; in response, in 1902 the French colonial government began paying a bounty for their carcasses—that is, until it realized locals were breeding them to cash in on the reward. In Washington, D.C., meanwhile, a 1917 program attempted to wipe out feral cats, with the enthusiastic backing of the local Cat Fanciers’ Association. “They saw alley cats as a threat to their precious kittens,” said Hayden Wetzel, a local historian. “It was wartime, so the slogan was ‘Kill a Cat for Your Country.’”

Canadians may not have been as enterprising as the Vietnamese or as bloodily patriotic as the Americans, but they have been far more successful. The brown rat (Rattus norvegicus) thrives only among human settlements, so farms and towns became the battlefields for the fight against invasion in Alberta. World War II propaganda set the tone for the province’s early campaign, during which 2,000 posters were distributed across the border region. “Rats are coming!” cautions one grayscale poster. “You can’t ignore the rat!” reads another. “We need to be properly organized and know what to do, in order to fight the battle successfully,” a 1954 booklet sternly warns. Mass chemical warfare cleansed the borderlands, with some 63,000 kilograms of arsenic powder blown across thousands of buildings.

After 1959, the volume of annual infestations was dramatically reduced, down from 500-600 a year to fewer than 200 by 1980; today, it’s a handful annually. (A 2012 infestation in the Medicine Hat landfill was a record-setter, with nearly 150 rats eventually rooted out.) The propaganda didn’t let up: “The only good rat is a dead rat,” reads a 1975 poster. Today, the provincial government focuses mostly on stories placed regularly in the Canadian media covering the success of the program, instead of the sneakiness of the rodent. Rat control has become institutionalized, not only through regular inspections but through a public proud of Alberta’s rat-free status and keen on maintaining it. The whole program currently costs just about $380,000 a year—most of the money is spent on exterminators’ salaries—but saves Alberta’s farmers millions.

Across the Pacific, another former colonial outpost is struggling with European invaders, at far greater cost. Alberta’s success might be imitable, but other countries lack the geographical advantages that confine the rat to a narrow access corridor. New Zealand has had a rodent problem ever since the Maori brought the kiore, or Polynesian rat, with them in canoes in the 13th century. But the first R. norvegicus—far larger and meaner than its Polynesian cousin—crawled off a ship in the 1770s and discovered a land of plenty. To the rat, the eggs of New Zealand’s bird life, which had never adapted to murine predators, offered an all-you-can-eat buffet. Rats and other nonnative species, such as possums and stoats, slaughter approximately 25 million birds a year. The slaughter, plus rats’ usual damage to crops, cost the economy $2.3 billion annually, according to the government. 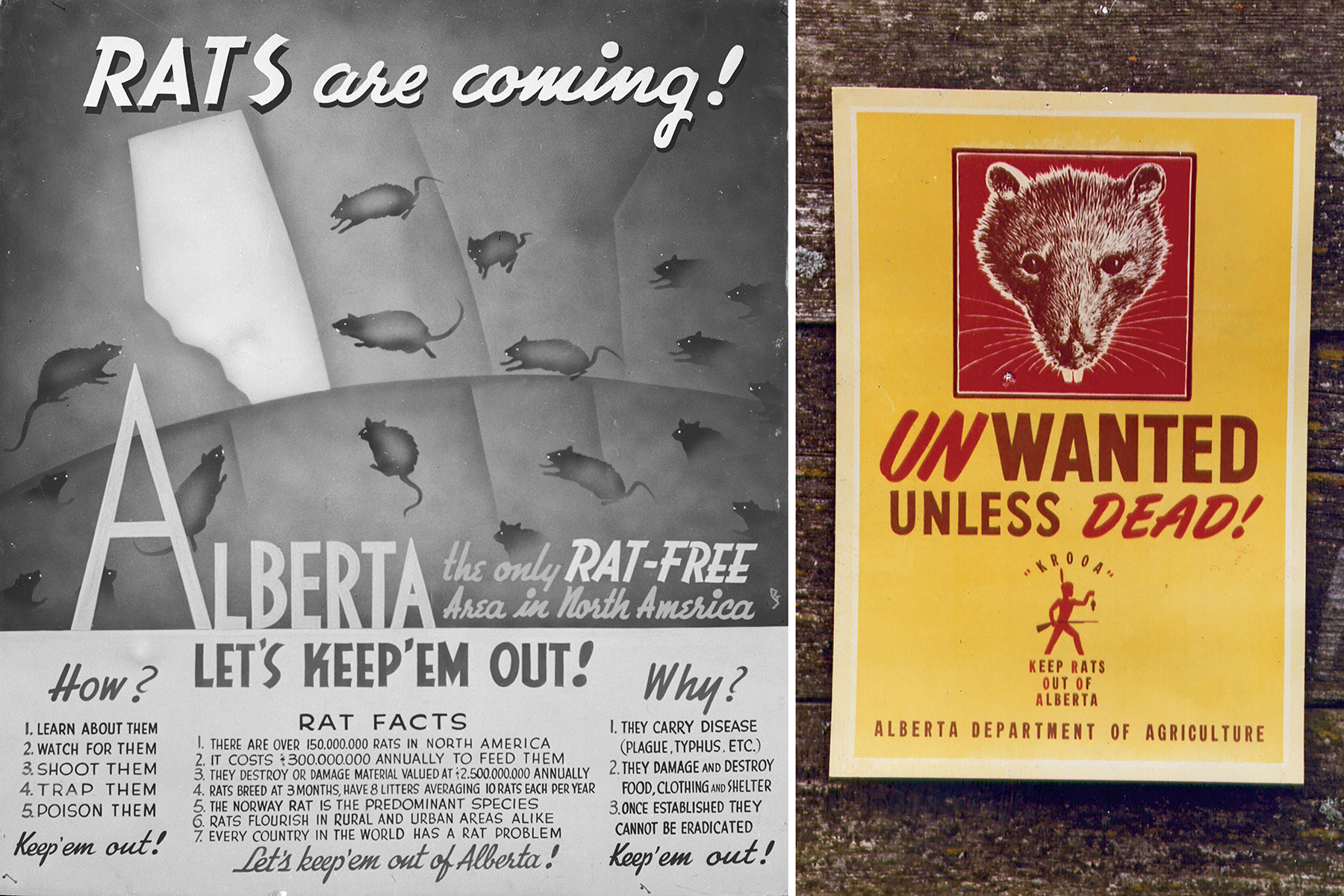 New Zealand has battled to keep as much of the country rat-free as possible, especially its isolated islands that preserve taonga (“treasures” in Maori), unique flora and fauna such as the kiwi and the kakapo parrot. But rats are master swimmers and hiders; one test subject, Razza the rat, evaded capture for more than four months, becoming the unlikely hero of a children’s book. All it takes to defeat a mass extermination campaign is a single pregnant survivor.

That’s why the government has given up on half-measures; instead, a hugely ambitious program launched in 2016, Predator Free New Zealand, envisages wiping out not only rats but stoats and possums by 2050. It’s an expensive effort. The pilot scheme—conducted on two inhabited islands, covering almost 15 square miles—cost about $3 million. The plan is to assault the rats (and other invasive predators) on all fronts, using drones to blitz them from above and map their locations, customized poisons and traps on the ground, and perhaps (although it’s highly controversial) genetic modification to permanently alter breeding habits.

The plan is to assault the rats on all fronts, using drones to blitz them from above and map their locations.Part of the work, said the conservation biologist James Russell, a key mover in the program, must focus on public education and support. Drawing on models such as the Alberta strategy has helped create an informed and engaged public, with more than 1,000 volunteer groups involved in wildlife protection. In Canada, the program built on wartime language, engaging a public that was already eager to come together to fight an alien menace and focusing on the danger to human civilization and industry. In New Zealand, it instead draws on the love of local wildlife and the natural world. “New Zealanders are in touch with nature,” Russell said, “and they play a huge role in protection efforts—they’re often the first to report new rat sightings to the hotlines.”

Climate change is giving a new urgency to the project. A record-hot summer created the breeding conditions for a rat explosion. Hotter temperatures let rats survive the winter better, Russell said, and to reach higher densities in the summer, pushing greater numbers into areas such as southern New Zealand, where the threat was once relatively low.

Beyond rats, a hotter world is making the threat of invaders greater across the board. As climate shifts, threatening flora and fauna are moving with it, even into once inaccessible areas. In the United Kingdom, a degree or two of warming could create a welcome home for the ecology-wrecking Argentine ant. Australia’s already stressed native species, including pygmy possums and wombats, are especially vulnerable to invaders such as foxes. Other governments are already experimenting with apps and hotlines to report invasive species. But as the planet warms, the need for far more extensive programs of education and eradication like Alberta’s will only grow.

Why So Many Young Men in South Korea Hate Feminism

Could a Monarch Heal Libya?