A Place for Women in Space

A lack of medium-sized spacesuits highlights women’s needs in the workplace.

On March 25, NASA announced that a historic all-female spacewalk on the International Space Station was cancelled, not for lack of personnel but for lack of clothing. Only one medium-sized spacesuit was available at the station. The astronaut Anne McClain was thus swapped for her colleague Nick Hague, who joined Christina Koch on the mission. The decision, though taken at McClain’s own recommendation as a safety precaution, highlighted a broader, pervasive issue: As long as that world remains built for men, women remain at a constant disadvantage.

“Even as female astronaut candidates prove their competence and ability, and as spacesuits and other equipment [are] adapted for them, they are still working in the context of a legacy that has been predominantly male,” said Shawna Pandya, a Canadian physician and citizen-scientist astronaut candidate. “We are thus working in a system with an unconscious male bias, which is nearly universal.”

This bias has deep roots. In 1962, commenting on whether women should be allowed in the space program, the German-American aerospace engineer Wernher von Braun, a former Nazi, joked: “The male astronauts are all for it. And as my friend Bob Gilruth says, ‘We’re reserving 110 pounds of payload for recreational equipment.’”

To be sure, a half-century has moved NASA toward gender parity. The 2013 intake of new astronauts to train for space travel was split evenly between four women and four men, and the 2017 class comprised five women and seven men. Further, “Both NASA and [the European Space Agency] have updated their style guides to get rid of [phrases like] ‘manned spaceflight’ and moved to more inclusive terms like ‘human spaceflight,’” said Kate Arkless Gray, a space journalist and women in STEM advocate.

Yet a gendered lag persists in the design of the organization’s mission tools, which can sometimes see women struggle—literally—to fit in. This is by no means unique to NASA and is reflected across the space science industry.

“I had a rotation as an analog astronaut at the Mars Desert Research Station in Utah—real life on fake Mars, as it were,” Pandya said. “Anytime we exited our habitat, we had to suit up in a simulated spacesuit with a standard backpack to house our life support systems. Standard-issue meant that backpacks were designed for men, and the straps of the backpack kept slipping off my shoulders. We often covered [4 to 7 miles] by foot in a day, and there was potential for the straps to evolve beyond merely a nuisance factor to a performance hindrance.”

That hindrance isn’t limited to spacewalks. The default human form is assumed by designers and inventors across industries to be male. Because work environments are set up to accommodate an average male body, women operate to a constant disadvantage. Women wear safety gear designed for men, handle machinery built for men, use man-sized surgical tools, work in offices set to temperatures that suit men—and which can cause illness for women—suffer greater exposure to harmful chemicals, and use gadgets (such as phones) designed to fit men’s hands. These gadgets also carry male-biased software such as voice recognition, which is more likely to register male speech. 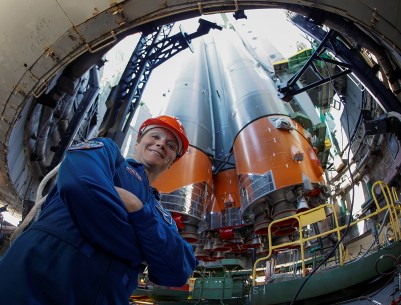 The astronaut Anne McClain in front of the Soyuz MS-09 spacecraft at the Russian-leased Baikonur Cosmodrome in Kazakhstan on June 4, 2018. (Shamil Zhumatov/AFP/Getty Images)

In her recently released book, Invisible Women: Data Bias in a World Designed for Men, Caroline Criado Perez details how what she refers to as the gender data gap between men and women—literally less data gathered and put into practical application around the female body—not only renders women’s lives constantly more uncomfortable and inconvenient than their male counterparts but also puts them in serious physical danger. For example, despite being statistically less likely to be involved in a car crash, women are 47 percent more likely to be seriously injured if they are and 17 percent more likely to die than men. That’s because so-called female crash test dummies—which are effectively scaled-down male dummies—were not used in the United States until 2011 and ignore crucial anatomical distinctions—such as weight, muscle distribution, and skeletal differences, which could save women’s lives.

“Women have been driving cars for decades,” Criado Perez told Foreign Policy, “and new cars are being created all the time with all sorts of modifications. Why not make them suit women? Globally, [no one] is using an anthropomorphically correct female crash test dummy. It means a huge proportion of women are in danger. It’s a shockingly overt and blatant illustration of the way we conceive of the male body as the standard.”

It’s not just cars—vehicles of all types are consistently designed for men. “When I sit in the cockpit of a Cessna 172, I have the seat advanced and elevated to its maximum setting and have even resorted to sitting on makeshift boosters for adequate visibility,” said Pandya, who is also a pilot. “I say this as someone who is 5 feet, 7 inches. I am not a short for a female, but the cockpit has been made for a man.”

The male template used in constructing spaces, machines, and tools doesn’t just make jobs harder for women. It can limit their access in the first place. “I got turned down from the air cadets in 1998 for not being heavy enough,” Arkless Gray said. “You needed enough body weight to counteract the force of the explosive ejection mechanism. I desperately wanted to fly though, so I went back a couple of years later. I still hadn’t put on enough weight before the weekend medical, so I gave up my place.”

Lack of appropriate equipment for female workers inevitably reinforces gender stereotypes that might prevent them from taking certain jobs in the first place. This is regularly the case within the emergency services. “Until five years ago, there weren’t any ramps on British ambulances,” said Chloe Hippert, a paramedic based in Devon, England. “That made it difficult to carry people. The National Health Service has introduced facilities to help with this in the last few years, but that was a response to the number of people overall who were taking time out for back injuries—men and women—rather than the influx of women into the service, which has been massive. I still definitely get comments from patients asking, ‘Are you sure you can carry me?’—to which the answer is yes, but they aren’t always convinced!”

Structural impediments such as these mean that women in medicine are constantly—often unconsciously—compensating in ways that create additional work within the minutiae of daily tasks. “In surgery or endoscopy, the size of the instruments is made for a male’s hands,” said Pandya, who is also a surgeon. “So I have to adapt the angle of my hands and how I hold the instrument, which can be too large for my hands, to achieve the proper grip.”

Poorly fitting personal protective equipment (PPE) for female first responders can even be deadly. The 2017 guidance document for the Trades Union Congress (a federation of trade unions across Britain) noted that protective gear for women is not only regularly ineffective—it can be actively harmful. Women described stab-protective vests choking them when they sat down, causing back problems requiring physiotherapy, and ill-fitting to the degree that they left their sides totally exposed. “PPE is a misnomer when it comes to women,” Criado Perez said. “During my research for Invisible Women, I came across a female police officer in Spain who had bought her own stab vest so that it would fit. She was written up for it.” The same U.K. guidance document found similar issues with all types of PPE, including gloves offered in large sizes (which can cause slippage), facial safety wear designed to fit only men’s heads, and harnesses ill-adapted to accommodate a woman’s hips and breasts.

But, in space at least, the increased uptake of women into classes and mission crews means that their feedback as test subjects regarding suit maneuverability and design is being taken into account in forthcoming models. “Being involved in the testing process meant that our experiences in the context of our anatomy will be incorporated into future spacesuit iterations,” Pandya said. It looks possible that, in some respects, gender parity might be reached in space before it is on Earth.

Holly Thomas is a journalist based in London, England Twitter: @HolasT

Tough but torn, Kelley Eckels Currie must find a way to balance her loyalties.

At the U.N., America Turns Back the Clock on Women’s Rights

Trump’s Space Force Gets the Final Frontier All Wrong

A new space race may be on, but the United States should opt for peaceful exploration rather than military presence.

Why China Just Doubled Down on Australia