Is India’s Modi a Reformer or a Performer?

In the world’s biggest democracy, good politics often have nothing to do with good economics.

Starting on April 11, an estimated 900 million Indians will be eligible to cast their ballots in a national election spanning five weeks. The battle is widely seen as a referendum on Narendra Modi, the most powerful prime minister in a generation, and his Hindu nationalist Bharatiya Janata Party (BJP). Though known as “superman” to his core supporters, many of whom thought he could transform India into an economic superpower, Modi was already backing away from reform when he scored an unexpectedly crushing 2017 victory in Uttar Pradesh, the most populous Indian state.

In India, good politics often have nothing do with sound economics, notes the global investor and author Ruchir Sharma. In the following excerpt from his new book Democracy on the Road: A 25-year Journey Through India, Sharma chronicles the 2017 Uttar Pradesh campaign and the questions it raised about Modi’s political and economic legacy—questions that follow him into the national contest today.

Starting on April 11, an estimated 900 million Indians will be eligible to cast their ballots in a national election spanning five weeks. The battle is widely seen as a referendum on Narendra Modi, the most powerful prime minister in a generation, and his Hindu nationalist Bharatiya Janata Party (BJP). Though known as “superman” to his core supporters, many of whom thought he could transform India into an economic superpower, Modi was already backing away from reform when he scored an unexpectedly crushing 2017 victory in Uttar Pradesh, the most populous Indian state.

In India, good politics often have nothing do with sound economics, notes the global investor and author Ruchir Sharma. In the following excerpt from his new book Democracy on the Road: A 25-year Journey Through India, Sharma chronicles the 2017 Uttar Pradesh campaign and the questions it raised about Modi’s political and economic legacy—questions that follow him into the national contest today.

In 2017, Modi turned the state election in Uttar Pradesh into a referendum on his role as national supremo, asking people to vote for his party and let him choose the state chief minister. Not since the late 1970s—when supporters of Indira Gandhi would say, “India is Indira, Indira is India”—had India identified so closely with one leader. Modi made his grand entrances alone and cast a shadow so complete that some voters in this politically obsessed state could not name any other BJP leader.

Modi was no longer the man who just three years earlier had promised a clear break with India’s socialist traditions, campaigning on a promise of “minimum government, maximum governance”—a streamlined administration that would not interfere in the private sector. He had talked about attracting multinationals with tax breaks, privatizing state companies, and making it easier for businesses to acquire land. He had ridiculed the welfare populism practiced by his predecessor, Manmohan Singh, saying that the Indian National Congress’s big spending was both a source of India’s double-digit inflation and an insult to the poor. Like many observers from Mumbai to New York, I thought Modi had a chance to be a transformational leader who could reshape popular thinking about the value of big government.

By 2017, Modi had belied those hopes. One top American diplomat who met him around this time described Modi as “a performer, not a reformer”—and by performer he did not mean showman. He meant micromanager, focused on executing fixes to one problem at a time rather than reducing the overbearing role of the government in the economy. Instead of further decentralizing the national bureaucracy and freeing the states to run themselves, Modi was by all accounts exerting total control over his ministers and running the most centralized administration India had seen since at least the days of Indira Gandhi, demanding that all decisions be cleared by him and the expanding staff of the prime minister’s office. His control over information remained firm, and he had yet to hold a single press conference as prime minister.

Modi began to emphasize more and more his own backward caste roots, presenting himself as a born ally of the poor. Modi spoke less of attracting big business and more of providing loan waivers to farmers, giving out free cylinders of gas, and cleansing the system of corruption and the streets of filth.

He had also begun to show a growing willingness to use the levers of state power to control the economy. The most dramatic example came on the evening of Nov. 8, 2016, when he announced that, at the stroke of midnight, India would immediately withdraw all large-denomination rupee notes—86 percent of the currency in circulation. Advertised as a way to force wealthy tax dodgers to turn in their black money and catch them unawares, this demonetization scheme also threw the lives of poor savers into chaos.

When Modi first came to power, he seemed different from other Indian politicians: less beholden to the internecine caste struggles of his home state, better positioned to sell transformative reform to the nation as a whole, and more capable of reforming India’s dysfunctional government. But this overnight decree banning big bills showed the side of Modi more interested in wielding than reducing state power. I was reminded that as chief minister in Gujarat he had not in fact privatized any major state-owned company. Instead, he installed handpicked CEOs, closely monitoring their performance and relying on his own intimidatingly clean reputation to make state companies run more honestly and efficiently.

Early on, Modi had also worked to raise India’s global profile, traveled often to foreign capitals, and sought peace with archrival Pakistan. Lately, he had traveled mainly to Indian state capitals and had revived his party’s old view of Pakistan as an incubator of terrorism. His message to the BJP faithful: Expand our domestic base so that our brand of Hindu nationalism faces no obstacles. His aim—a crushing, all but unprecedented victory—was captured in a BJP slogan: Abki baar 300 ke paar. “This time, let’s win more than 300 seats.” Out of 403 seats in the Uttar Pradesh assembly, a victory that large would leave the BJP’s rivals more dead than alive.

At a rally in the hardscrabble town of Deoria, nearly 200 miles east of Lucknow, we listened as Modi launched into an aggressive defense of his economic policies, casting himself as a can-do defender of the average Indian voter. “I believe in hard work, not Harvard,” he said, taking a shot at critics of his demonetization scheme such as the Harvard University professor Amartya Sen. He compared these types unfavorably to himself, “a poor man’s son who through his hard work is trying to improve the economy.” The coddled elite, which was questioning his government’s new method of calculating GDP growth, would never have raised such doubts if the Congress were in power, Modi said.

It was all about us against them. Modi bashed previous governments for catering to the Muslim minority in Uttar Pradesh, reserving for them unfair shares of public jobs, services, and welfare assistance. The sectarian overtones seemed clear; the BJP did not field a single Muslim candidate for any of the 403 seats at stake. Some of the leading conservative voices in the party had begun using the word “secularist” as a term of derision for liberals urging greater representation for minorities, much as Donald Trump had turned the word “globalist” into a term of mockery for liberals keen on keeping the United States engaged with the world.

The drumbeat behind all of Modi’s speeches was that only he could fix India. He bashed Uttar Pradesh’s most powerful regional party leaders, Akhilesh Yadav and Mayawati—who goes by just one name—for encouraging each other’s corruption and looting the state one by one. As ever he reserved his harshest sarcasm for the Gandhis, reflecting the BJP’s underlying desire to create a Congress-mukt Bharat, or Congress-free India. Zeroing in on one of the Congress’s campaign tactics, which involved holding faux-casual chats between Rahul Gandhi and ordinary voters on portable cots, or charpais, Modi said the few people who had showed up did so mainly to steal the charpais. 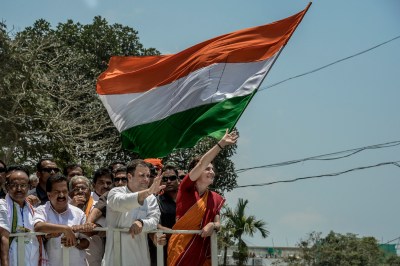 Rahul Gandhi and Priyanka Gandhi wave at the crowd in the road show after filing nominations from Wayanad district on April 4 in Kalpetta, Wayanand, India. (Atul Loke/ Getty Images)

A week later, the results came in, and the BJP stunned itself in Uttar Pradesh. When they had written that slogan about winning more than 300 seats, party officials didn’t really believe it was possible, but they won 325, or 41 percent of the popular vote. In India’s winner-takes-all voting system, the winner did not need a majority of the vote to take a crushing majority in the legislative assembly. All the opposition parties were left in tatters, the Congress especially.

Most observers had expected that this election would be close, that the BJP would face a tough challenge from the combined might of the local Samajwadi Party and the Congress. I had assumed that an economically nonsensical idea like demonetization would hurt Modi politically. But the opposition was fractured, with Mayawati fighting on her own and the anti-BJP Muslim vote splitting. Opinions on demonetization were divided on party lines, with Modi supporters strongly backing it, regardless of how badly they had been hurt by it. This is how it works in the real India: Good politics so often have nothing to do with good economics and much to do with raw emotion and old loyalties.

Former Prime Minister Manmohan Singh of the Congress party had come to be seen as a tool of the Gandhis, with no popularity of his own, and he was often overshadowed by a cabinet of powerful rivals. In his first term, Modi had emerged as the opposite, utterly dominant as leader of the BJP, with a voice that drowned out all rivals, both in his and in opposition parties. More and more voters seemed to worship Modi as a strongman who could deliver development, not only for his home state of Gujarat but for all of India. 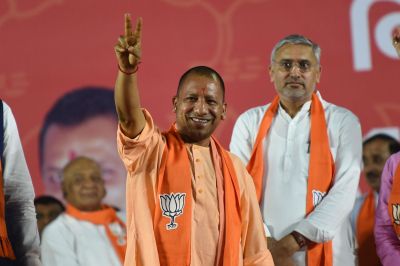 The Uttar Pradesh results emboldened Modi to pick as chief minister the controversial Yogi Adityanath, a BJP ultraconservative known for his saffron-colored robes and fiery nationalism. The choice of Adityanath, which seemed unimaginable on the eve of the vote, heralded a more nationalist, populist, and sectarian government.

When Modi had taken power in 2014, the BJP held the chief minister’s office in five states; by 2017, it held that post in 15, and its partners in the National Democratic Alliance held an additional four for a total of 19. To Indian liberals, the following months were among the darkest Indian democracy had seen in decades, and many began to draw parallels between Modi’s India and the slide toward one-man rule in Vladimir Putin’s Russia or Recep Tayyip Erdogan’s Turkey.

Ruchir Sharma is the chief global strategist at Morgan Stanley Investment Management and the author of The 10 Rules of Successful Nations.

NEW FOR SUBSCRIBERS: Want to read more on this topic or region? Click + to receive email alerts when new stories are published on Economics, India