A slate of new releases reexamine gender in conflict.

Long before the #MeToo movement began to spread across the world, women had started playing increasingly prominent roles in armies around the globe, from the United States to Iraqi Kurdistan. It’s no surprise, then, that the literature of war is finally catching up, expanding past macho tales into more nuanced investigations of women’s experiences.

Against this backdrop comes D-Day Girls by the journalist Sarah Rose, Code Name: Lise by Larry Loftis, who previously wrote about the World War II double agent Dusko Popov, and Madame Fourcade’s Secret War by Lynne Olson, who has written five previous histories of World War II. The first two books tell the stories of female British spies who worked to shore up the French Resistance in preparation for the Allied D-Day landings, and the third tells the story of a privileged Frenchwoman, Marie-Madeleine Fourcade, who became the head of occupied France’s largest spy network. It’s hardly an unknown slice of the war—numerous previous World War II narratives have focused on women and their work—but Rose, Loftis, and Olson delve unusually deeply into the personal lives of their heroines, as well as their work. 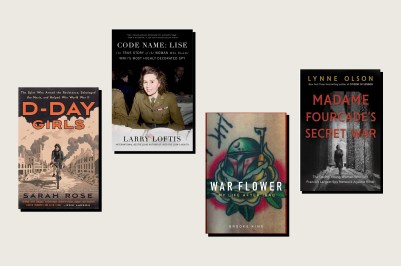 D-Day Girls, written with novelistic detail, weaves together five women’s narratives using historical research from contemporary periodicals, archives, and interview records. The British government, Rose writes, was initially concerned about allowing women into the Special Operations Executive (SOE), a secret agency formed in 1940 to foment insurgency in land captured by Nazi Germany. Nicknamed the “Ministry of Ungentlemanly Warfare” by Winston Churchill, the SOE did not send female agents overseas until 1942. As Rose writes, “Putting women in the line of fire was obscene, the brass said: War is fought by men for the sake of women and children. … The Edwardians who ran the war … believed female recruits would deliver a new weapon into Hitler’s hands: rape.” Such arguments, as Rose recounts them, echo contemporary U.S. officials’ concerns about putting women in combat. As recently as 2016, Owen West, who is now the assistant secretary of defense for special operations and low-intensity conflict, along with his father, Bing West, a former assistant secretary of defense for international security affairs, argued that changing a “band of brothers” to a “band of co-eds” would soften the units’ ferocity.

British officials’ initial fears weren’t entirely unfounded. Agents captured in Nazi-controlled territory risked torture and death. But that applied to male agents as well as female ones. And rather than being a liability, the women of the SOE—typically French-born Englishwomen—enjoyed certain advantages their male peers did not. They often posed as refugee widows or schoolgirls bicycling about the countryside, which allowed them to draw far less suspicion than a solitary man might while delivering messages or operating covert radio transmitters. Female agents—trained in parachuting, hand-to-hand combat, the use of pistols, and demolitions—also recruited and mobilized operatives in preparation for the Allies’ eventual D-Day invasion. In her case, Marie-Madeleine Fourcade was able to parlay a job in language interpretation into intelligence gathering from the German occupiers. Olson’s depictions of Fourcade are saturated with vivid sensory details of her protagonist’s sweat and fear, as well as the myriad bruises she received during a narrow escape from a makeshift prison in Aix.

What separates these books from previous spy stories of the same period is the way these authors take pains to show that the women’s identities as wives, sisters, daughters, and mothers were inseparable from their wartime activities. As D-Day Girls recounts, Andrée Borrel, a former Parisian shopgirl who came to England after helping downed pilots escape occupied France, regularly visited her sister while working undercover in Paris for the SOE and made lovers of two male agents in consecutive years. In a similar vein, Code Name: Lise shows how a spy named Odette Sansom struggled with boredom in her duties as a housewife and stay-at-home mother before deciding to answer Britain’s call to duty, and Olson mentions Fourcade’s “profound guilt” over her two-year separation from her children, and how she worried over a daughter who was convalescing from hip surgery while she went back to work.

Skip ahead about 70 years, and some of the tensions remain similar. In War Flower, a memoir by the Iraq War veteran Brooke King, the author toggles between a brutal deployment and family obligations.

War Flower is a series of scene sketches detailing the chaotic childhood that drove King into the U.S. Army, her gruesome deployment as a mechanic assigned to collect human remains from bombed-out vehicles, and her return as a pregnant veteran. Her advice to fellow female soldiers is blunt: “Keep tampons in your grenade pouch for bullet wounds” and “Do not fucking die.” Women in combat must take pains to hide their vulnerability from their male comrades, King writes: “Don’t ask for help from the hajjis or the infantrymen or the Cav scouts; they all like fucking with women.” 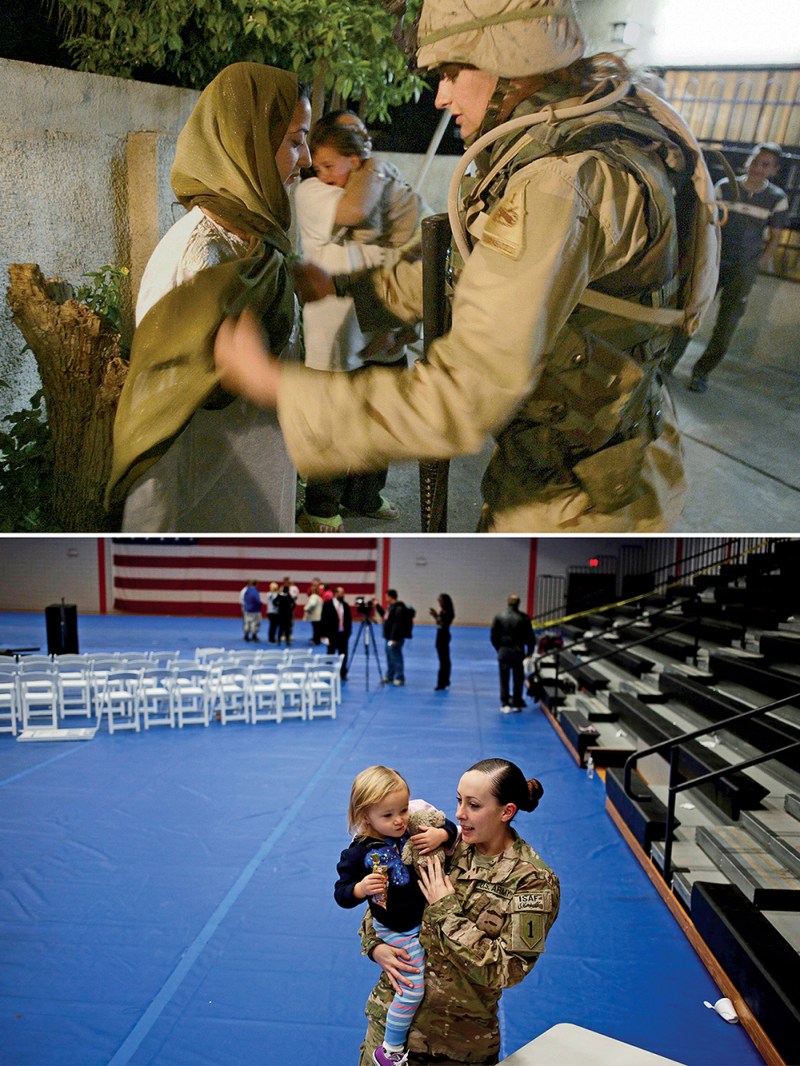 Top: A female U.S. soldier searches an Iraqi woman outside her home in Baghdad on March 21, 2004. Above: U.S. Army Sgt. Michelle Porter reunites with her 2-year-old daughter in Fort Knox, Kentucky, on Nov. 20, 2013, after a nine-month deployment in Afghanistan. (Karim Sahib/AFP/Getty Images/Luke Sharrett/Getty Images)

In Iraq, King finds respite from her abusive first marriage in another fellow soldier, Cpt. James Haislop. But in narrating their relationship, she shows how women’s war experiences frequently differ in yet another manner: When the affair results in King becoming pregnant, she is sent back to a base in Germany and takes a voluntary discharge. Meanwhile, the Army fires Haislop and jails him for drug abuse and fraternization. Their fate marks a vast gulf from one of the D-Day Girls, Mary Herbert, who at the age of 40 intentionally conceived a child while undercover in Poitiers, France, with her agent partner (and later husband) Claude de Baissac. Their infant daughter threw Germans and French neighbors alike off Herbert’s trail; no one suspected that a frail new mother would risk working for the Resistance. This unexpected blend of motherhood and spycraft gave Herbert an advantage. But the story also underscores how spies have a wider range of feminine roles available to them than ground troops do.

Rose, Loftis, and King also offer a new dimension to previously written histories of the long-term consequences of war on mental health and relationships. Herbert’s “immediate postwar years were anxious ones,” Rose writes. She calls Sansom “shell-shocked,” while Loftis references a “nervous condition” noted in Sansom’s personnel file; both would today be diagnosed as severe post-traumatic stress disorder. And King’s gory post-deployment nightmares ratchet up her stress while parenting twin toddlers during her volatile second marriage to Haislop. Her memoir is laced with stories of drug and alcohol abuse and the long shadows of combat trauma she and her loved ones experienced.

In the 1940s, women and their relationships had it no easier: Sansom became romantically involved with fellow SOE agent Peter Churchill while undercover in France. She married Churchill after they returned to the United Kingdom. Though the 1950 movie Odette portrayed their relationship’s romantic origins, the pair divorced in 1956. The experiences narrated in these stories are reflected in the broader military. A 2007 study by the Rand Corp. found that divorce rates in the U.S. military were nearly three times higher for enlisted women than for their male counterparts, and a study of 1,358 U.S. Army families published in the Journal of Marriage and Family in 2016 showed “the experience of prior deployments is associated with significantly lower current marital satisfaction among military couples.” Though these studies indicate that all military marriages suffer when one partner deploys, female service members are more likely to see their relationships end.

All of these books show that no one can completely compartmentalize war trauma and there is no single way to serve.

In addition to losing their marriages, women often find that men discount their combat experience. When a pregnant King’s family finally coaxes her into visiting a California Veterans Affairs hospital, a male doctor points to men suffering from traumatic brain and spinal injuries and tells King to, in her words, “think long and hard before lying about combat.” The doctor’s blithe assumption that King must be lying about the shrapnel in her shin came after her 2006 deployment, during which she and other women saw combat on convoys, at checkpoints, and while attached to infantry units on patrols, even though the U.S. Congress had not yet opened combat arms jobs to them.

As for Sansom, although she was eventually awarded the George Cross and membership in the Order of the British Empire, that did not prevent two former French Resistance members from claiming that she lied about her torture and slept her way to freedom. Although Sansom’s colleagues at the SOE backed her up, many of her actions could not be publicly corroborated until files were declassified in 2003.

All of these books show that no one can completely compartmentalize war trauma and there is no single way to serve. These new texts—as well as Love My Rifle More Than You by Kayla Williams and Shoot Like a Girl by Mary Jennings Hegar—are the beginnings of a new library and a more robust approach to analyzing women’s essential role in war. This literature represents the early days of women’s military narratives; we still need to hear from women in non-Western armed forces. Their stories are still waiting to be told.