The EU’s Buildings Are as Opaque as Its Bureaucracy

The European Union is in crisis. Whatever happens with Brexit, there are powerful anti-EU forces running from Italy to Hungary that further threaten its integrity. The reaction from the center is not promising, with French President Emmanuel Macron’s authoritarian reaction to the yellow vests street protests a case in point. Riot police on Paris streets every weekend since November 2018 do not indicate a EU at peace with itself. Brussels is in trouble.

That crisis is reflected in the EU’s very landscape—and especially in Brussels, the notoriously dysfunctional capital of Belgium and since 1958 the de facto, and often equally dysfunctional, capital of Europe. That imperial status was achieved largely by accident. As a Belgian philosopher argued in 2014, it may have even come about because in most languages, Belgium begins with the letter B, thus putting it before other contenders alphabetically—one of innumerable stories about the city that contribute to a narrative of the irrational, or even the absurd, that echoes some of the feelings about the organization it hosts.

Brussels isn’t a big place. Its population in 2017 was officially estimated at 1.2 million for the municipality, with a total of 3.6 million people in the urban area. It is, however, an unusually complex city: Divided into no less than 19 municipalities, it has two official languages and a layered structure of governance that produces—as Isabelle Doucet, a Belgian architect, has written—the persistent problem of multiples casquettes (“many hats”). Decision-making, she writes, is widely seen as “opaque,” even “Kafkaesque.”

That political opacity is accompanied by a taste for the grandiose. Despite its relative smallness, Brussels has some of Europe’s grandest monuments, chief among them the ludicrously oversized Palais de Justice. Designed in a neoclassical idiom by the local architect Joseph Poelaert and built, although never entirely completed, from 1866 to 1883, it is said to be the largest building constructed anywhere in the 19th century. Its construction involved the demolition of most of the Marolles neighborhood, and the term “architect,” referring to Poelaert, was for years a serious Brussels insult (basically, “asshole”). 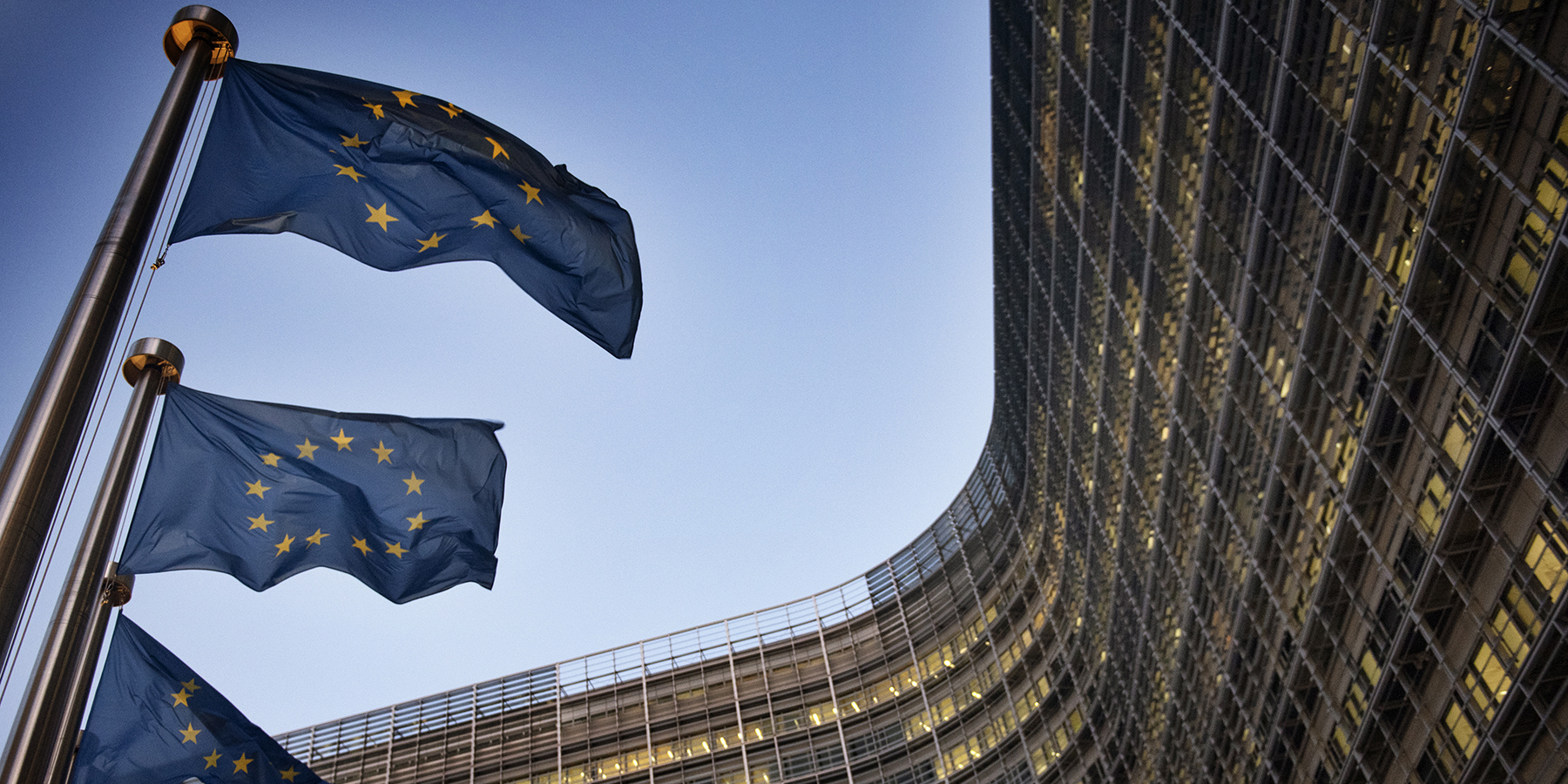 European flags wave in front of the Berlaymont building in Brussels on Jan. 14. (Michele Spatari/NurPhoto via Getty Images)

Brussels’s grandiosity is a product of its imperial ambitions, which saw Belgium, at its height in the early 20th century, establish a massive colony in Africa. The latter-day empire of the EU is politically much grander, and it occupies a whole city district, the unofficially named European Quarter. This district lies just a mile to the east of the medieval center, bisected by the major artery of the Rue de la Loi and bookended by the Parc du Cinquantenaire. The latter, with its 1905 triumphal arch, is a reminder of how power conventionally represents itself in imperial cities.

The EU section of the city doesn’t use the conventional image of power at all. It “lacks narrative” according to Philippe Perchoc, an EU policy analyst and academic. For the Dutch architect and theoretician Rem Koolhaas, this lack is a more existential “iconographic deficit,” an inability of the EU to produce compelling images of itself, perhaps because it cannot. For the Brussels-based writer and sociologist Peter Vermeersch, the EU Quarter is “grandiosity alternated with bric-a-brac … as if we’ve been working towards some greater goal but were suddenly interrupted by the need for pragmatism.” And crucially, perhaps, for our understanding of the EU, he said, “it seems it’ll never be quite finished, which is an impression one may get from the entire Brussels Capital Region.”

The European Quarter came into being accidentally. Real estate interests saw opportunities for development as the European Economic Community and then the EU prevaricated on just how they should shape their new home. It was once an area of modest buildings and 80,000 or so people, but today its principal monuments are two of Europe’s largest buildings: the Berlaymont building, the home of the European Commission that was built from 1963 to 1969, just half a mile to the south, the European Parliament complex, the first phase of which opened in 1992. In between these complexes is the Europa building, the new (2017) home of the European Council and the Council of the European Union, and the still colossal Justus Lipsius building that the European Council (the committee of head of state) vacated in 2017. The Rue de la Loi axis is the location for the 40 or so other buildings housing EU institutions. 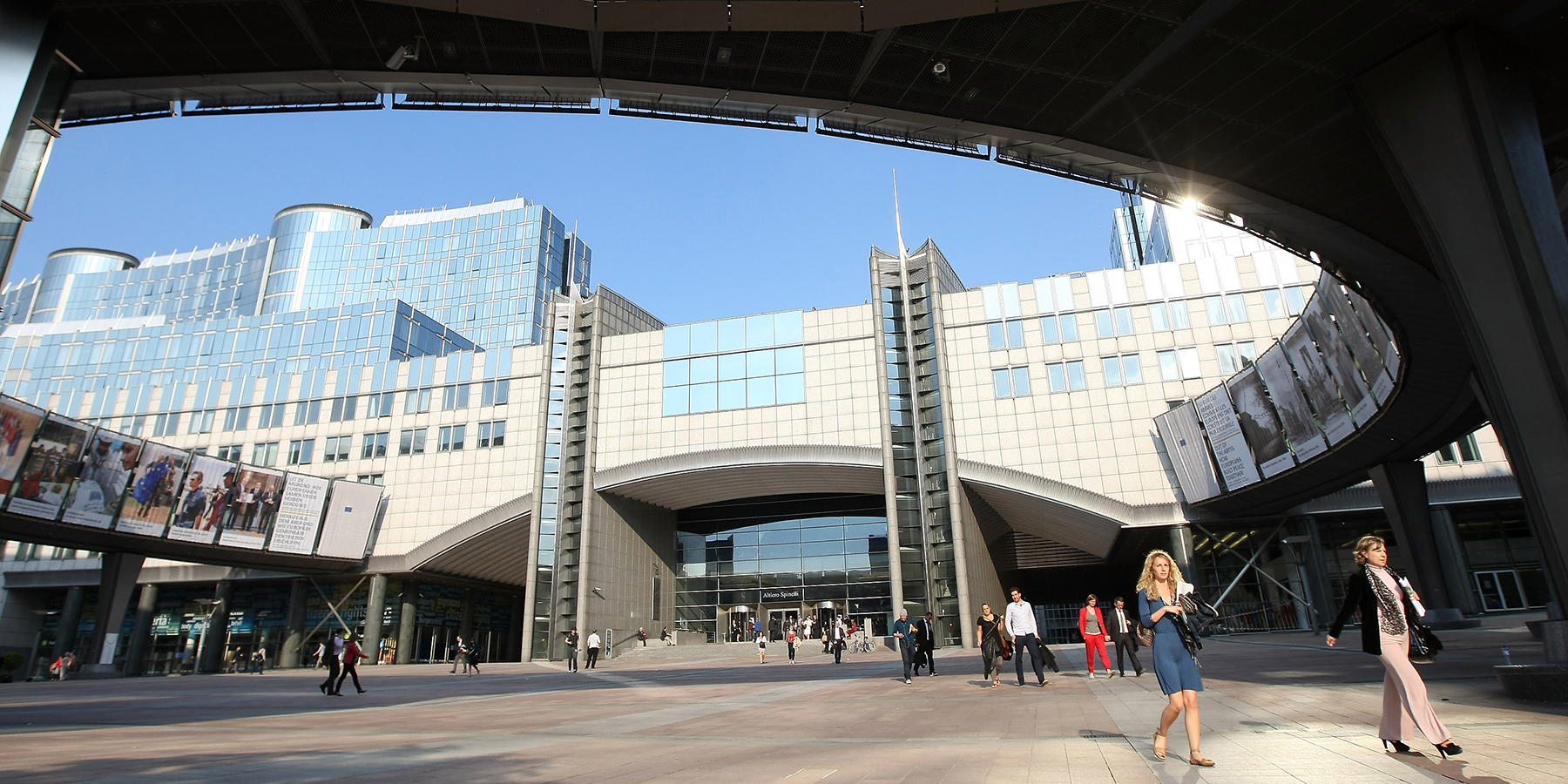 The Altiero Spinelli building of the European Parliament in Brussels on June 5, 2013. (Adam Berry/Getty Images)

It is certainly a big area, and the buildings themselves are often enormous, especially by comparison with those in other cities. In a smallish European capital city, a 200,000-square-foot building would count as big. But in Brussels, the buildings are bigger by a factor of 10: The Justus Lipsius building is nearly 2.5 million square feet, and the larger of the Parliament buildings is more than 3.5 million square feet. These are among the biggest concentrations of office space in the world. The real estate market in Brussels is dominated by this one client, which has sized over half the available office space in the city. The EU as client has created, by stealth, a new landscape in this part of the city.

It is, however, for the most part a bland and self-effacing architecture that largely repels the gaze. The Belgian architectural historian Hilde Heynen, an expert in modern Brussels, bemoans its lack of “architectural enthusiasm.” It’s a “bureaucratic monoculture,” she said, in which residences and retail are rare. Partly this is by design, in that the EU, as a client, has repeatedly demanded an area for work alone; it’s also partly by the actions of the market, which has consistently made offices in this area the most valuable property in Brussels. The EU’s political complexity has opened up a space for the relatively free play of the market: The market has provided solutions that government, bogged down by committees, cannot. A market orientated around power has produced a landscape that does not represent political power in the usual ways. That relatively free play explains the lack of consideration given to the outward form of the buildings: For an organization so concerned with symbolism, the EU’s buildings are remarkably lacking in symbols. The Parliament is a case in point. As Heynen notes, it couldn’t be formally commissioned as a Parliament because Brussels is the de facto, not official, capital of the EU. It could only come into being as a speculative conference center; there was no opportunity to make an architectural symbol of power.

And the nature of EU power means that its buildings are not always occupied straightforwardly. In fact, they may not be occupied at all (not unlike the largely vacant Palais de Justice). The Parliament was technically a conference center, as the official site of the EU Parliament is Strasbourg. The complex was built starting in 1989—speculatively! – by a canny consortium of developers (Société Générale de Belgique and BACOB) that correctly predicted the need for it to serve the Parliament when it was not in session in Strasbourg. The developers were right, and as the Parliament in Brussels has grown, so has its need for office space, along with it is now three times its original size. Power means a steady accretion of physical space.

It can also mean, given the inexorable growth of institutions and their complexity, some extraordinarily protracted building projects. The Berlaymont building, the original home of the European Commission and—given its cruciform plan and curving curtain wall façade—one of the few distinctive parts of the EU’s estate, was declared unsafe due to its use of asbestos, vacated for renovation in 1991, and not ready for reoccupation until 2004. The rehabilitation of the building, at a cost of about 800 million euros ($900 million) took 13 years; the original construction took five. 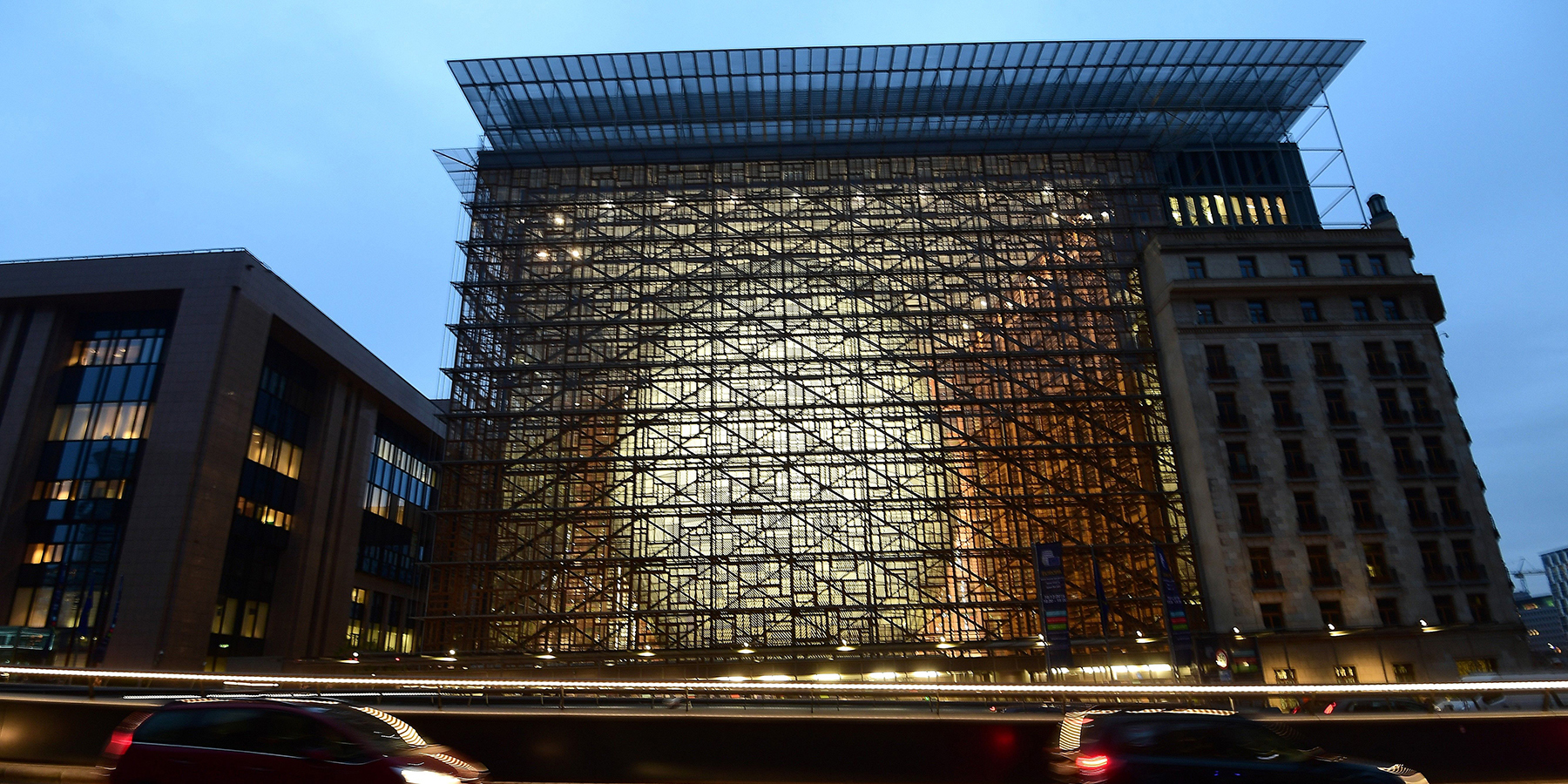 The Europa building in Brussels, seen in 2016, combines a new lantern-shaped structure designed by the consortium of Samyn and Partners (Belgium), Studio Valle Progettazioni (Italy), and Buro Happold (United Kingdom), and a renovated art deco complex designed by the architect Michel Polak in 1922. (Emmanuel Dunand/AFP/Getty Images) 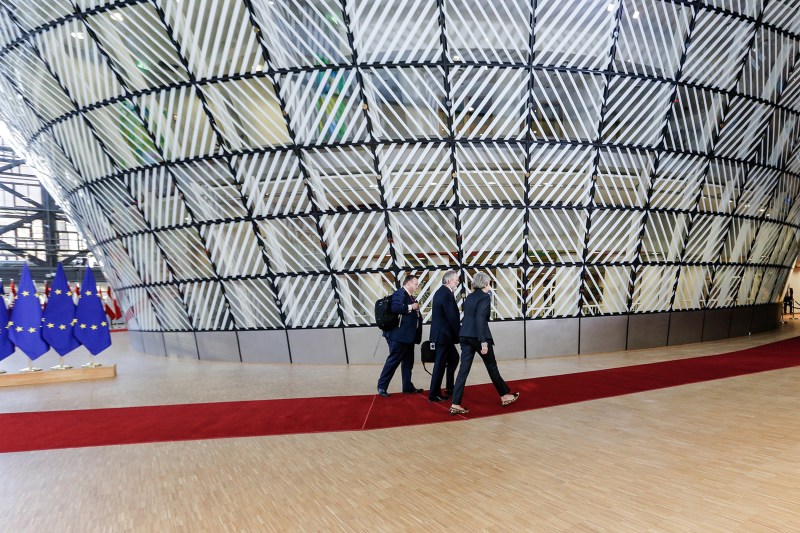 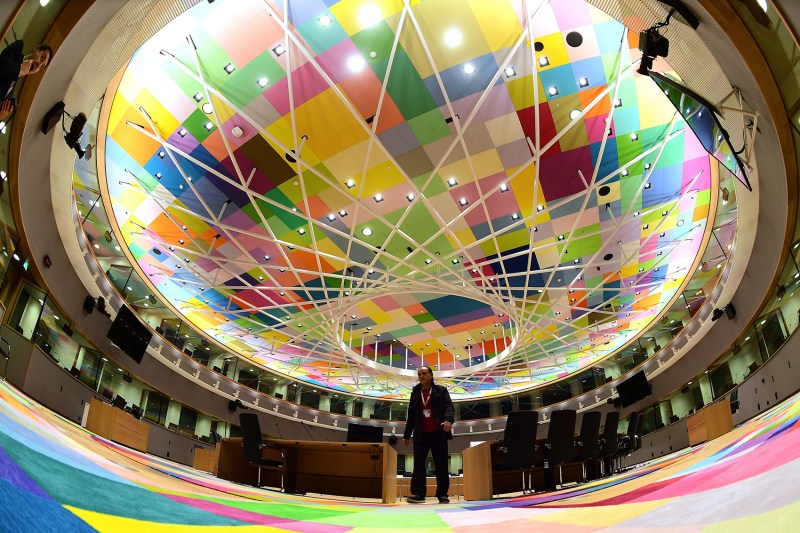 A view of the largest meeting room inside the Europa building in Brussels on Dec. 9, 2016. (Emmanuel Dunand/AFP/Getty Images)

Nothing about Brussels is straightforward, apart from its seemingly inexorable demand for space—occupied or not. In response to criticisms over its lack of architectural symbolism, the EU produced the Europa building, a rare effort to provide a new image for the European Commission. The building, designed by Philippe Samyn, is in effect a giant translucent lantern suspended in an atrium. The exterior walls are transparent, made up of a collage of timber window frames salvaged from demolition sites around the EU. The transparency is more in image than anything; the lantern (containing the offices) is literally opaque, so, rather like the EU itself, it promises openness without ever really delivering. The European Quarter unconsciously delivers an image of its own deeply confusing bureaucracy. The present crisis of the EU—confusing, sprawling, and all too often opaque to the people it’s supposed to serve—was prefigured in its very walls.

Richard J. Williams has been writing about cities for over 20 years His latest book is Why Cities Look the Way They Do, published by Polity. He is Professor of Contemporary Visual Cultures at the University of Edinburgh, and currently Head of History of Art.