What if Israel Threw a Eurovision Party and Nobody Came?

Europe is currently struggling to redefine its ties to Britain and chafing over its rapport with U.S. President Donald Trump’s administration. But the continent’s most complicated relationship may be with Israel. Many Israelis still view Europe as a fount of anti-Semitism, generally latent but sometimes blatant. And many Europeans consider Israel’s long military rule over millions of Palestinians in the West Bank and Gaza to be one of the world’s ugliest human rights violations. All of these tensions could peak in May, when Israel hosts Europe’s annual pop song competition, Eurovision.

An extravaganza of glitz and camp, Eurovision was established 63 years ago by an association of European public broadcasters as a way to knit Western Europe together during the Cold War. Over the years, it has grown to include dozens of countries and been a launchpad for international pop acts including Sweden’s ABBA and Céline Dion, who represented Switzerland.

Israel made its Eurovision debut in 1973; although not technically European, it was able to join because the Israel Broadcasting Authority was already a member of the European Broadcasting Union. Since then, the contest has held a special place in the Israeli imagination, and Israel has won four times.

A bid to hold the festivities in Jerusalem raised the possibility that Israel’s government would use the show as a platform to highlight its claim to the city as its undivided capital.

Israel secured the right to stage this year’s edition after its representative, Netta Barzilai, took first place last year. Tel Aviv, the host city, is gearing up for a huge influx of fans and has explored setting up campsites and leasing a cruise ship to accommodate hotel overflow. Forty-two countries will be sending acts.

But tensions have been mounting since Israel began planning the event last year. The European Broadcasting Union has pressed Israel for a commitment not to block entry to Eurovision delegations for political reasons—a fear based on the tendency of Israeli border officials to interrogate and sometimes turn back visitors who have been outspoken in their support for the Palestinians. A bid to hold the festivities in Jerusalem raised the possibility that Israel’s government would use the show as a platform to highlight its claim to the city as its undivided capital. Supporters of a pro-Palestinian campaign calling for boycott, divestment, and sanctions against Israel have called on entertainers to stay away.

“There’s a lot of politics in the competition. It’s a fascinating focal point for ties between Israel and Europe and Israel and the EU,” said Galia Press-Barnatan, a professor of international relations at the Hebrew University of Jerusalem. “The relations have never been better, but some things have never been worse.”

As Press-Barnatan points out, Europe and Israel share many points of affinity. A free trade agreement with the European Union signed more than two decades ago has turned the bloc into Israel’s biggest trading partner. Many Israelis hold EU passports, thanks to their parents’ or grandparents’ European origins. Israeli basketball and soccer teams compete in pan-European tournaments.

But the EU has remained an outspoken proponent of a two-state solution, even as the United States has become less vocal on the issue and Israeli Prime Minister Benjamin Netanyahu’s government has grown decidedly hostile to the idea. The EU has also insisted that products made in West Bank settlements for sale in Europe be labeled “Israeli settlement” rather than “made in Israel” so that they don’t benefit from the free trade agreement and so that European consumers know what they’re buying. Under a joint research program, the EU has allocated some $150 million in research and development grants for projects with Israeli universities but has also angered Israeli politicians by stipulating that the funds must be spent inside the country’s pre-1967 borders.

“We care what everyone thinks about us—which is something you don’t see as much when there’s a war in Gaza, when dozens of Palestinians are getting killed.”

These and other measures prompted Netanyahu to accuse the EU late last year of taking a “hypocritical and hostile” stance toward Israel. For seven years now, disagreements over policy toward the Palestinians have prevented the convening of what’s supposed to be an annual bilateral diplomatic summit on Israel’s relations with the EU. “Europe and Israel are certainly conducting a policy of distancing from each other,” said Oded Eran, a former Israeli ambassador to the EU and a senior research fellow at the Institute for National Security Studies at Tel Aviv University.

But there seems little chance that Israelis will distance themselves from Eurovision. When Barzilai’s feminist anthem “Toy” clinched first place last year, thousands of Israeli fans celebrated in the pre-dawn hours with a dip in the fountain at Tel Aviv’s Rabin Square. On her return, Barzilai received a hero’s welcome and reprised her signature chicken dance for Netanyahu.

“We care what everyone thinks about us—which is something you don’t see as much when there’s a war in Gaza, when dozens of Palestinians are getting killed,” said Eran Singer, an Arab affairs analyst with Israeli public radio and a Eurovision devotee.

Israelis across the political spectrum have reasons to feel good about the event taking place in Israel, Press-Barnatan said. “If you are a right-wing nationalist, this is a way to make a point that the [boycott movement] has lost and how successful you are. If you are a liberal cosmopolitan Israeli, this is a way to embrace the world.” 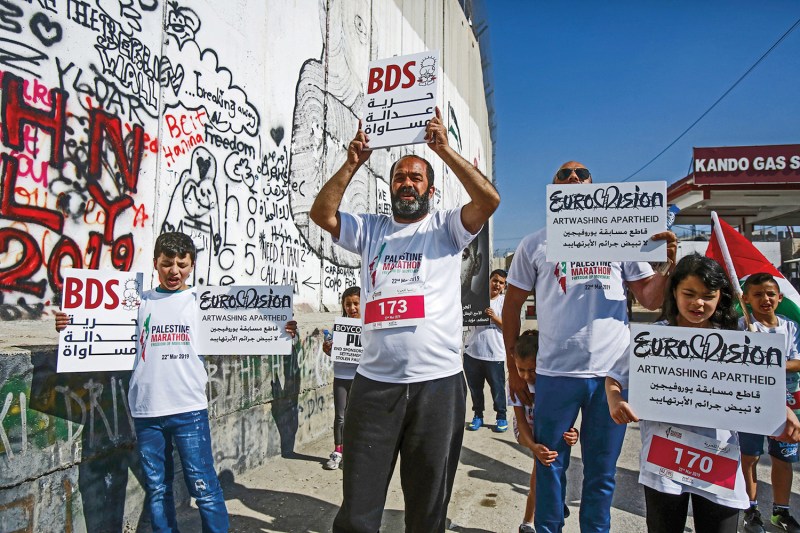 Activists in Bethlehem, along Israel’s separation barrier between Jerusalem and the West Bank, call for a boycott of Eurovision on March 22. (Musa Al Shaer/AFP/Getty Images)

Eurovision Executive Supervisor Jon Ola Sand said in an interview with the Israeli newspaper Haaretz that he didn’t want anything to get in the way of the entertainment. “As an organization, we have a promise to our participating broadcasters to keep the shows free of politics,” he said. As with the Olympics, however, politics are inevitable whenever countries compete. And picking the winner of a pop music contest is much more subjective than determining who won a 100-meter dash. Victory in the Eurovision contest is decided by a combination of jury and telephone voting from participating countries.

But none of the broadcasters has pulled out, underscoring just how difficult it is for Palestinians and their supporters to get Europe to use its leverage to force a change in Israeli policies.

In 2017, Russia pulled out of that year’s contest, which was to be held in Kiev, when its representative was denied entry by the Ukrainian authorities. This year, Iceland’s representative, the band Hatari, has vowed to protest Israeli policies while at the competition, and boycott efforts have been mounted in several other participant countries.

But none of the broadcasters has pulled out, underscoring just how difficult it is for Palestinians and their supporters to get Europe to use its leverage to force a change in Israeli policies. For one thing, resolving the Israeli-Palestinian conflict has taken a back seat to more urgent issues, such as Brexit. What’s more, European states are far from united on Israel: While some countries have led the campaign to label exports from Jewish settlements, others are considering following the U.S. lead on moving their embassies to Jerusalem.

“Europe is deeply divided on the Israeli-Palestinian issue. … Therefore you can’t get a unanimity for tougher measures,” Eran said. “One has to admit there is fatigue regarding this protracted conflict, and there’s disappointment with the Palestinian Authority and the rift with Hamas.”

With anti-Semitic violence and xenophobic sentiment rising across the continent, the symbolism of, say, a boycott of Israel would expose European governments to intense criticism. That’s one more reason Europe’s delegations are expected to show up in Tel Aviv in May.

Joshua Mitnick is a journalist based in Tel Aviv. Twitter: @joshmitnick

Corporations Will Be Complicit if Israel Goes Through With Annexation

Annexation will raise their legal risk of being held accountable for human rights violations and war crimes.

Israel’s West Bank land grab is on hold for now.

The Two-State Solution Is Dead. What Comes Next Is Worse.

Annexation of the West Bank would cement a one-state reality on the ground, enshrining Israeli rights over Palestinians.