‘This Restoration Will Take at Least a Decade’

Despite being spared the worst, Notre Dame is not out of danger, says the building expert Caroline Bruzelius.

Caroline Bruzelius, an architectural historian at Duke University, has scaled the heights of Notre Dame in ways that few people have—and she is thus all too aware of how fragile the cathedral remains in spite of being saved from total devastation during Monday night’s raging fire. Bruzelius, an expert in Gothic cathedrals, studied the revered structure closely from top to bottom nearly four decades ago when scaffolding was erected around it for cleaning, and she later wrote a scholarly article going into great detail about the building’s strengths and weaknesses. She spoke with Foreign Policy on Tuesday about the long road of reconstruction that lies ahead.

Foreign Policy: The news looks better today than the worst that was feared last night regarding damage from the fire.

Caroline Bruzelius: I think it’s going to take quite a while to really understand the extent of the damage and to which parts. There is the stained glass, the altar, the structures, and the building, so all of this will require different kinds of experts analyzing their different areas of specialty. I’m particularly concerned with the condition of the stone walls. That fire was immense and incredibly hot—although stone won’t actually burn, it can be terribly damaged by great heat. The whole area of the vaults and upper walls will need to be assessed.

I am imagining, though I don’t know, that this restoration will take at least a decade. The critical thing will be to cover the building, to find a way to protect what are now the exposed upper surfaces of the vaults—from water, from the weather—and also the building downstairs. 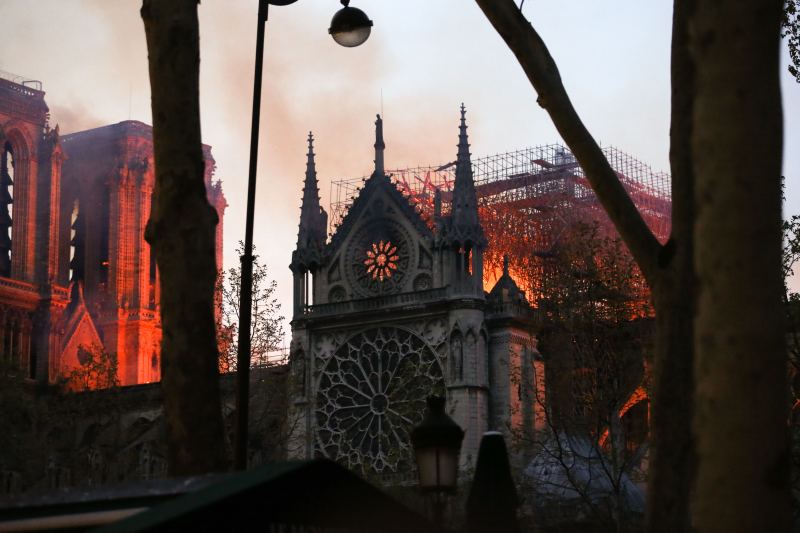 Flames glow through the windows of Notre Dame Cathedral in Paris on April 15. (Michel Stoupak/NurPhoto via Getty Images)

FP: Based on your research on the construction of Notre Dame and the history of it, how vulnerable was it just before the fire? They were doing reconstruction for a reason, after all.

CB: Well, yes, it was badly in need of restoration in the parts we do not see when we walk in the building, and I’m talking specifically about the enormous wooden structure between the upper parts of the vaults and the roof. That’s old timber. For centuries, it gets heated in the summer and frozen in the winter, and that was incredibly flammable, and that’s why the fire was so horrific and spectacular. It was those old timbers that were burning so ferociously. We saw the fire spread from one section to another in rapid succession.

FP: Do you think it was something of a miracle that so much was preserved?

CB: Yeah, when I saw the photographs late last night of the interior, I was hugely relieved because it looked as though only a couple of the vaults were penetrated by either the spire falling or by beams falling through them. Now we don’t know about the condition of the rest of the vaults. As soon as the fire is over, the weakening of the structure may mean that things will be falling down from high up. Remember that a Gothic cathedral is a dynamic structure, where you have vaults pushing out and flying buttresses pushing inward, and when that system is compromised, it may become very dangerous. 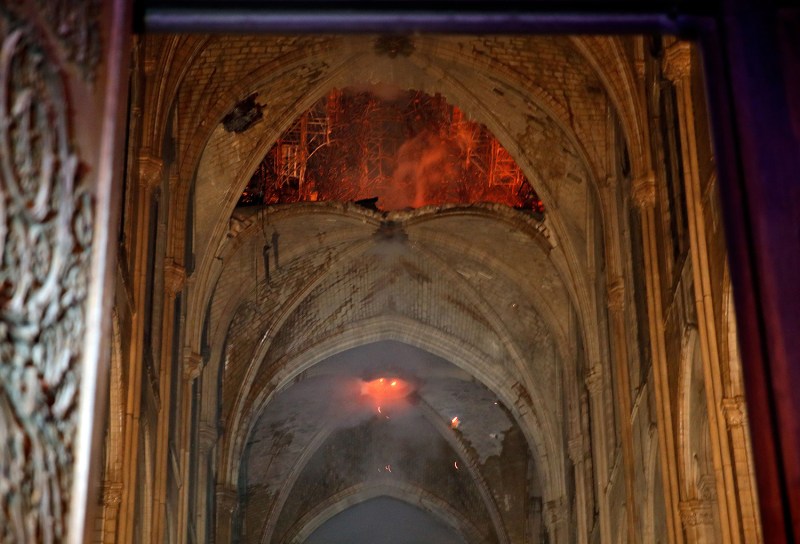 A burned-through hole in the roof from the interior of Notre Dame Cathedral on April 15. (Philippe Wojazer/AFP/Getty Images) 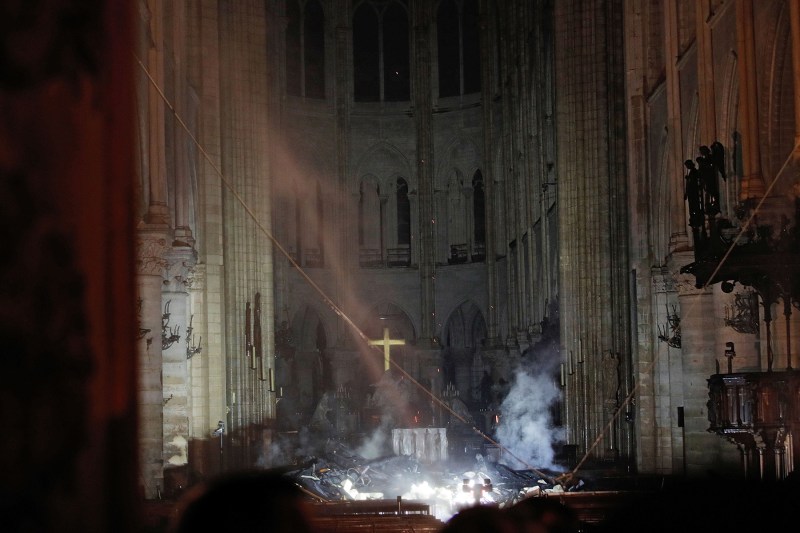 FP: What we do seem to know at this point is that many of the relics inside and apparently the stained-glass rose windows were preserved.

CB: That’s wonderful. Again, it depends on where the fire was concentrated. Some of the most beautiful windows in the church were in the transept arms on the north side and south side, and if those were preserved, we’re on our knees in gratitude. I haven’t yet seen pictures of them.

FP: Can you talk about your original interest in Notre Dame—why you researched it?

CB: I was actually living in Paris and working on another book, back in the late ’70s, when they began to clean the inside, and that was an amazing opportunity. There was a scaffolding erected up the entire height of the building, and when I checked around, no architectural historian trained in medieval buildings was going up and down that scaffolding. It was a lifetime opportunity to see parts of the building that normally nobody can see. I ended up writing a very long and probably deeply boring article about it because I’m interested in how buildings are put up. 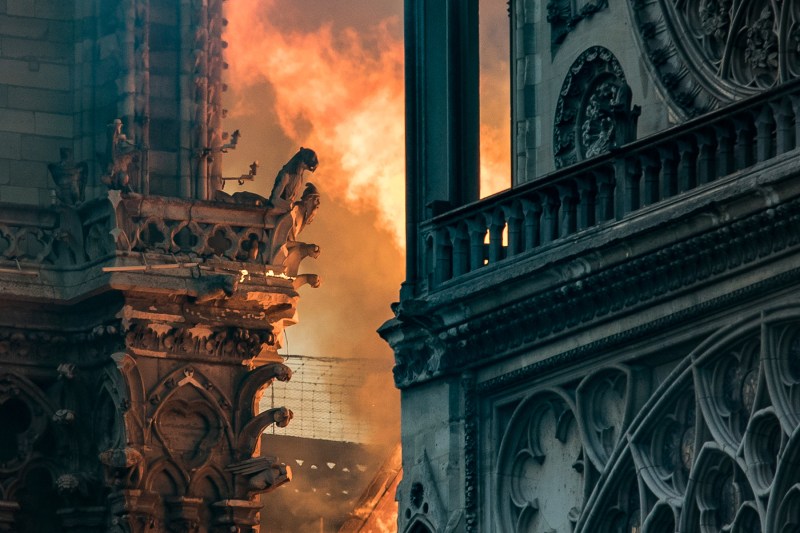 Flames and smoke billow around the gargoyles on Notre Dame Cathedral on April 15. (Thomas Samson/AFP/Getty Images)

FP: And you were looking particularly at the stone walls?

CB: Yes, if you measure them, if you record every detail, you begin to unfold a narrative over time.

FP: So based on your intimate knowledge of the cathedral’s construction, can you talk about what reconstruction will entail?

CB: I’m guessing that will probably take a number of months just to understand how bad the damage is, where the most urgent repairs are. I imagine they’re going to have to put up wooden framework, wooden struts, in those areas especially where the vaults were partially collapsed. You don’t want more stones falling down—you need to support what has been damaged—so there’s going to be some temporary shoring up before they can really begin to repair. 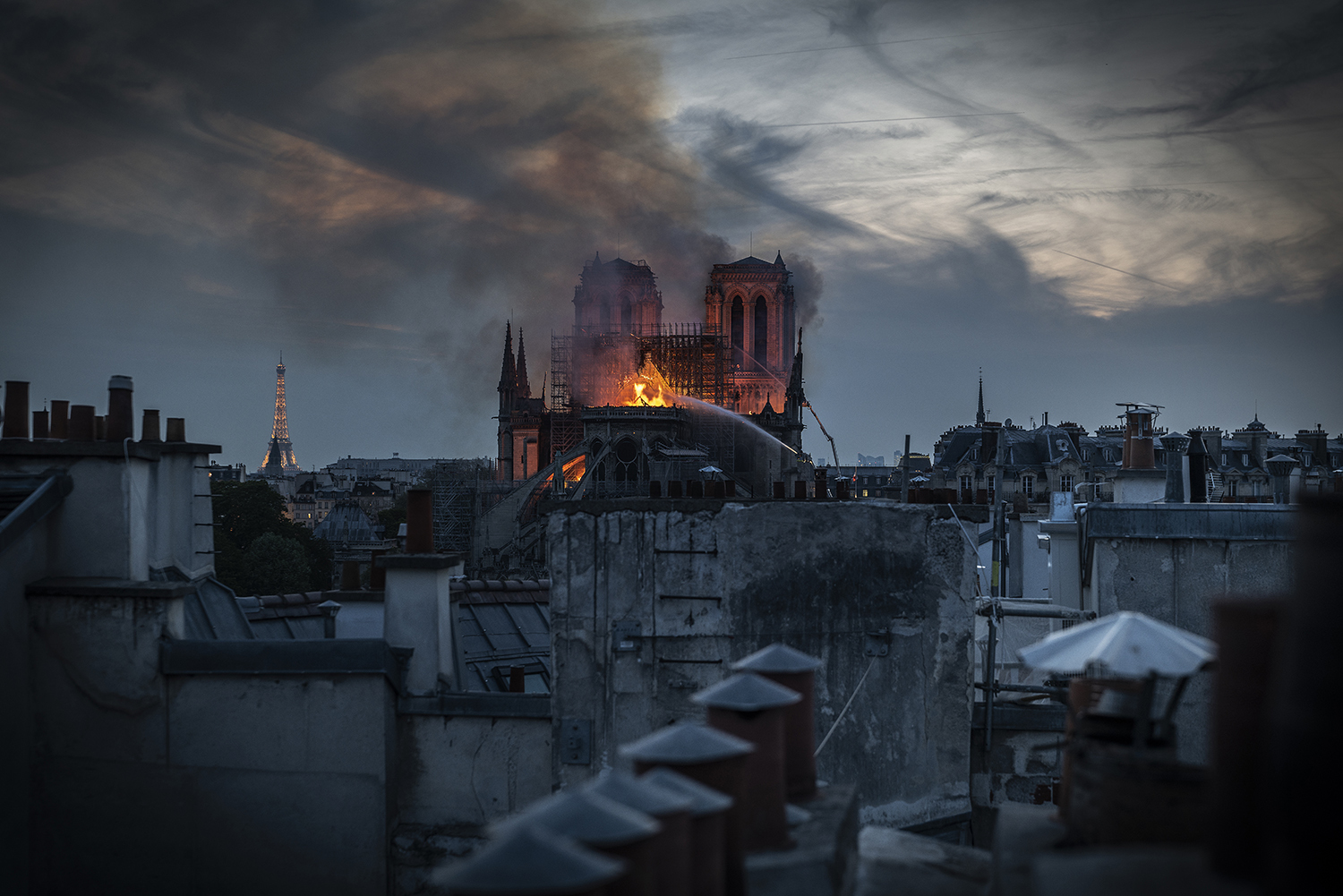 FP: And I guess it will be a long, long time before the public can gain access again.

CB: Alas, that is true. But you know one thing I’m hoping is that the public will become more aware of the fragility of our historical buildings. They’ll put money in the box and ask for donations for upkeep. And maybe they’ll treat these buildings not just as the obligatory sight you go to see in Paris but really as a building that has had an enormously interesting life and has played a fundamental role in the history of France.