What’s at Stake in Indonesia’s Elections?

The world’s third-largest democracy goes to the polls. 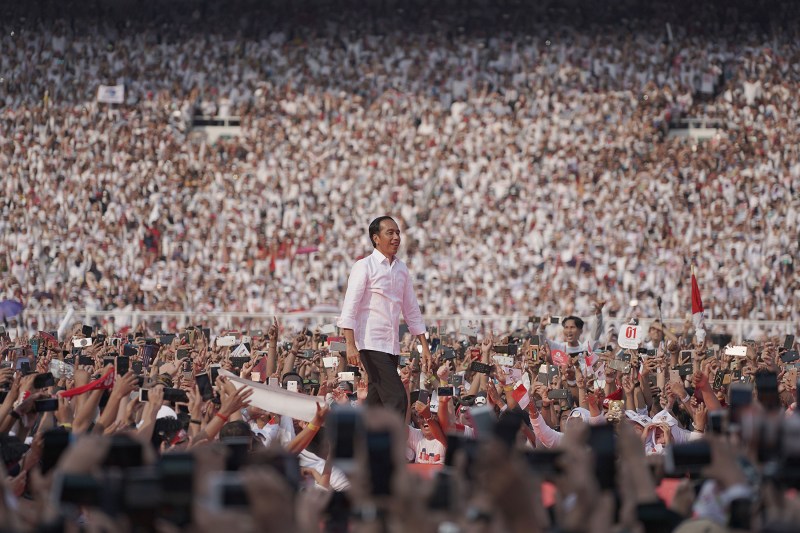 Incumbent Indonesian President Joko Widodo speaks to his supporters during a campaign rally in Jakarta on April 13. (Jefri Tarigan/Barcroft Media via Getty Images)

A successful furniture salesman from a modest background, Jokowi rose to prominence as the mayor of Solo, a midsize city in Central Java, and in 2012 he went on to become the governor of Jakarta, the nation’s capital—a city so large it is run by a governor and regional legislature rather than a mayor and city council. He used the role as a springboard to run for president in 2014, winning a closely contested race. 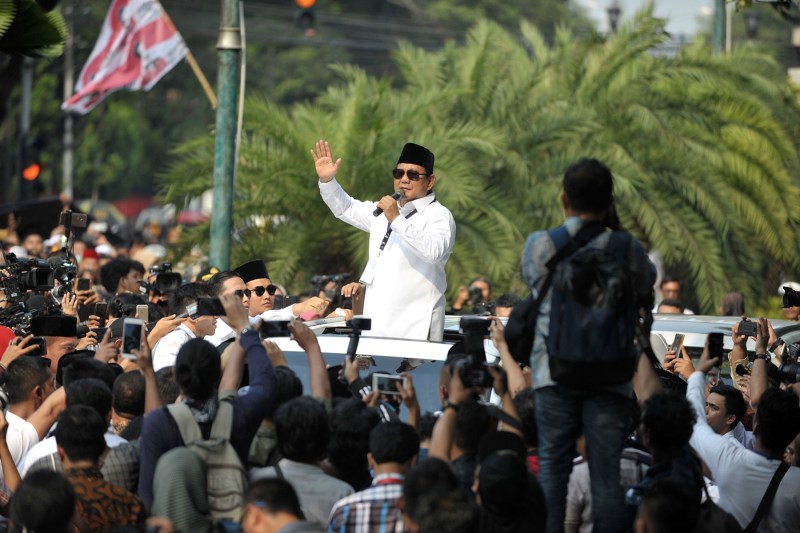 Jokowi’s main opponent in that race represented a very different political lineage: Prabowo Subianto was a wealthy magnate, a former special forces general, and the former son-in-law of Suharto, the military strongman who ruled Indonesia for more than 30 years.

The 2019 election is, on its face, a 2014 repeat: Jokowi, now the establishment pragmatist rather than the hope-and-change upstart, is once again vying with Prabowo for the nation’s highest office.

Indonesian presidential politics is not arrayed along a stark left-right spectrum but is instead focused on candidates’ personalities and proposals. This arena of attitudes and affects is where Jokowi and Prabowo diverge most substantially.

Jokowi, a technocratic-minded moderate, is running on a platform centered around economic development, infrastructure investment, and job creation. Prabowo is also focused on the economy but has put forward a more militarist, stoutly nationalist, and at times xenophobic vision, and he has forged closer ties with popular Islamist movements.

A second term for Jokowi would mean five more years of his struggle to implement growth-oriented economic reforms while navigating complex identitarian issues and threats to pluralism. A Prabowo victory would point the country in a new, more nationalist, potentially more autocratic direction. Conservatives, Islamist radicals, and the military would likely have more purchase in the halls of power.

Jokowi has not delivered the full range of economic policies he promised five years ago but has nonetheless pursued them aggressively, sometimes at the expense of human rights protections. Voters will have to measure his track record against that of Prabowo, who stands accused of a litany of human rights violations committed under Suharto, was banned for years from entering the United States due to his rights record, and was accused by former Indonesian President B.J. Habibie of attempting a coup. 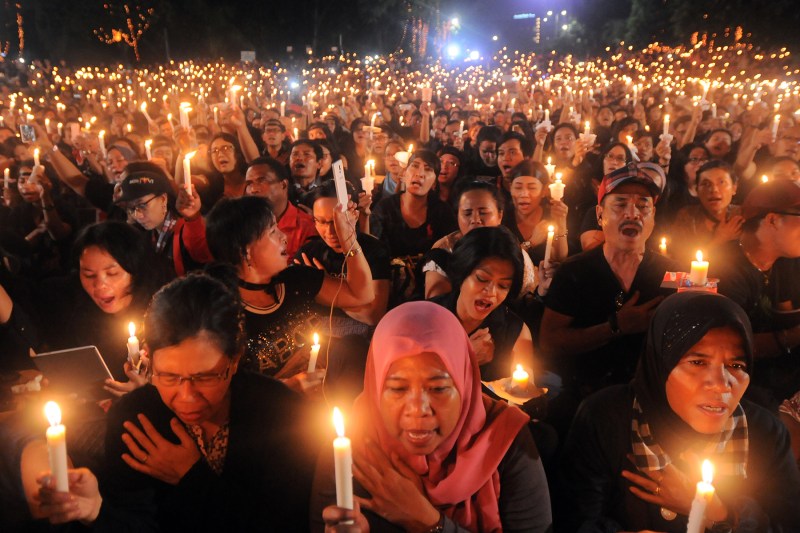 People gather to sing and call for the release of Basuki Tjahaja Purnama, known as Ahok, after his arrest for blasphemy, at Proclamation Monument in Jakarta, Indonesia, on May 10, 2017. (Dasril Roszandi/NurPhoto via Getty Images)

Since Jokowi took office in 2014, Indonesia’s political landscape has shifted.

The recent fate of Basuki Tjahaja Purnama, popularly known as Ahok—Jokowi’s former deputy, who became governor of Jakarta when Jokowi stepped aside to pursue the presidency—offers the best way to understand what’s changed.

Ahok was Jokowi’s closest political ally. If Jokowi is a somewhat unusual Indonesian politician, Ahok surpasses him in that respect many times over: He is markedly irreverent, of Chinese descent, and a practicing Protestant in the world’s largest Muslim-majority country. Everything from Ahok’s sharp-tongued manner of speech to his double minority status—Chinese Indonesians face a long history of persecution—put him on a collision course with the country’s creeping hard-line Islamist movement, for whom he was an obvious political target.

Ahok’s governorship was short-lived. In quick succession, he made an ill-advised joke about a Quran verse during a stump speech that touched off massive protests organized by Islamist hard-liners, lost his re-election campaign, and was jailed for blasphemy under an infrequently enforced law.

“His imprisonment was a loud wake-up call for many Indonesians,” Andreas Harsono, a Jakarta-based researcher for Human Rights Watch who visited Ahok in jail, told Foreign Policy. “There is a serious problem of religious freedom and discrimination against minorities in Indonesia.”

Whether Ahok’s incarceration represented an irrevocable turning point in the trajectory of Indonesian political Islam or more of “an imperfect case of the country’s endemic electoral fight between pluralistic democracy and political Islam,” as Krithika Varagur wrote in an essay for FP, remains the subject of debate. But the influence of Islamist hard-liners has certainly increased: Despite his generally secular disposition, Prabowo aligned himself with the Islamist political currents that pushed for Ahok’s ouster, and in an apparent attempt to outflank him, Jokowi named Maruf Amin, the head of Indonesia’s clerics’ council, as his running mate.

The presidential contenders may be the same as five years ago, but the identity politics in play have changed. 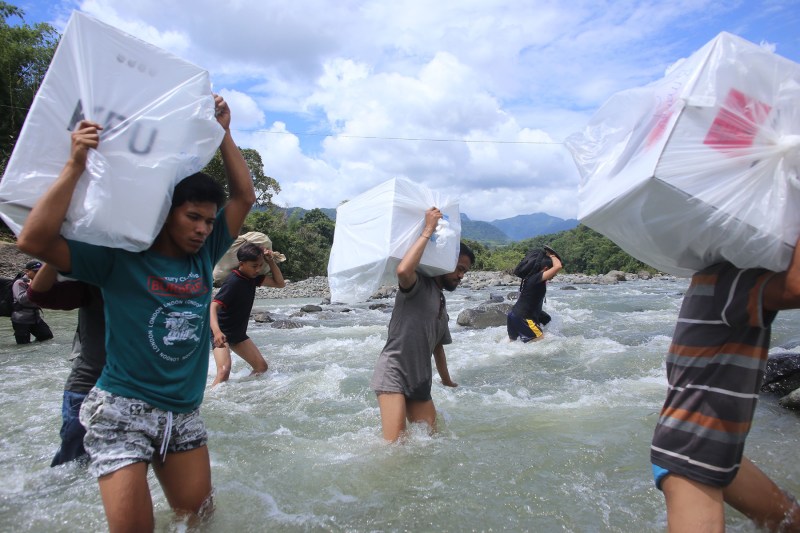 The machinery of democracy

Jokowi showed a strong early lead in the polls, although Prabowo has been closing the gap.

Regardless of the outcome, the sheer scale of the election marks what Ben Bland, the director of the Southeast Asia Project at the Lowy Institute in Sydney, called a feat of democracy, which “illustrates many of the oft-hidden processes that, beyond the simple act of casting ballots, underpin democratic societies.”

In a nation of more than 17,000 islands, some 8,000 of which are inhabited, organizing a one-day vote across more than 800,000 polling places is itself a mammoth endeavor. Election workers, some paddling canoes or hiking jungle tracks on foot, carry ballots to the country’s remote and rugged margins.

Other large democracies hold monumental elections. But in India, the world’s largest democracy, elections plod along for six weeks, which gives officials a bit more time to figure things out. The United States doesn’t hold direct elections for its highest office, instead filtering the vote through a centuries-old Electoral College, which is how both Presidents George W. Bush and Donald Trump became president despite losing the popular vote. That makes Indonesia’s the largest same-day direct presidential election in the world.

The Indonesian election does face substantial problems: Misinformation has rapidly proliferated on social media in the run-up to the vote, and more than a million indigenous people who do not have the right identification cards may not get to cast their ballots. Regardless, the process is proceeding apace—and its outcome will determine Indonesia’s future.

NEW FOR SUBSCRIBERS: Want to read more on this topic or region? Click + to receive email alerts when new stories are published on Politics, Southeast Asia

Can the CHIPS Act Put the U.S. Back in the Game?

The push to bolster domestic semiconductor production comes as the United States lags behind Asia and China squeezes Taiwan.