New pipeline projects throughout the Middle East could boost Russian influence there while also ensuring the country’s role as the prime supplier of energy to Europe.

As Washington readies itself for a diminished role in the Middle East, Moscow is laying the groundwork for a significant long-term presence. By acquiring pipelines and exploration rights in Turkey, Iraq, Lebanon, and Syria, Russia is building a land bridge to Europe through the

Middle East. In doing so, it will cement its role as Europe’s primary gas supplier and expand its influence in the Middle East, posing serious risks to U.S. and European interests.

Russia already supplies 35 percent of Europe’s total gas imports, and it has long worked to head off any European efforts to diversify energy supplies. Here, Russia also has to worry about its abysmal relations with Ukraine—the conduit for most of its Europe-bound exports. Building an energy transit network through the Middle East would allow Moscow to stay in the game.

The three pipelines will make Europe even more dependent on Russian gas while also driving deeper the wedge between the United States and the European Union.

Another leg of the new network will run through Iraq’s semi-autonomous Kurdish region before connecting to Turkey’s pipeline network for further export to Europe. In September 2017—days before the Kurdistan Regional Government (KRG) held an ill-fated referendum on independence—the Russian state-owned energy company Rosneft inked an agreement with the KRG to fund a $1 billion gas pipeline from Kurdistan to Turkey. The pipeline is expected to be able to meet approximately 6 percent of Europe’s yearly gas demand. And then, in October 2017, Rosneft took a controlling interest in an existing KRG oil pipeline to Turkey for $1.8 billion. That pipeline has been at the heart of strained relations between Iraq’s central government and the KRG since 2013, when Erbil began unilaterally exporting oil to Turkey through the pipeline, a move Baghdad criticized as a major constitutional violation. 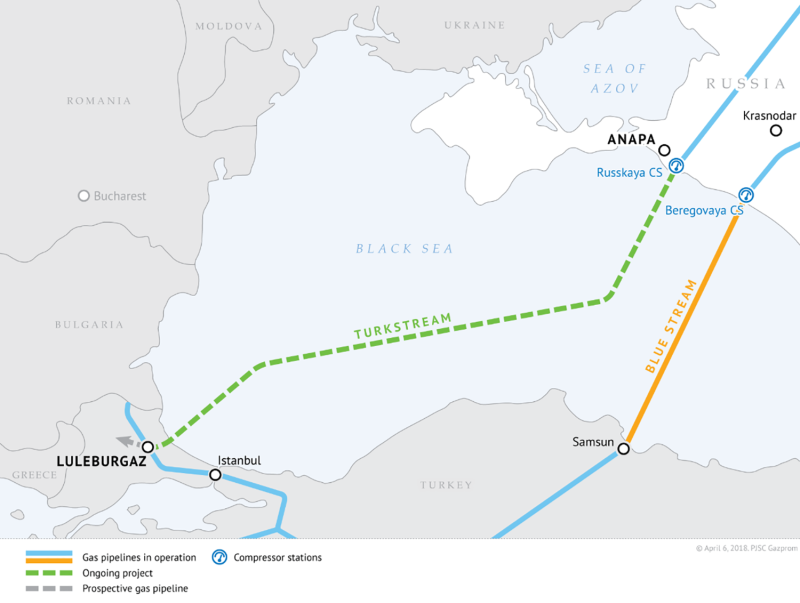 Russia has leveraged the tense relationship between Baghdad and Erbil to reap the most lucrative contracts possible. In the aftermath of Russia’s expansion into Kurdistan’s energy sector, Igor Sechin, the head of Rosneft, sent a letter to the Iraqi central government stating that since Baghdad had showed a “lack of constructive position and interest” to work with Rosneft, his firm had no choice but to do business with the KRG, which had demonstrated “a higher interest in expanding strategic cooperation.”

The gambit worked: Baghdad, seeking to peel Moscow away from Erbil, opened negotiations with Rosneft to tender construction of a new oil pipeline from the Kirkuk oil fields to the Turkish border, avoiding KRG territory. The new pipeline would replace a previous one that was destroyed during Iraq’s war with the Islamic State.

In Syria, meanwhile, Russia won the exclusive right to produce the country’s oil and gas in January 2017. On paper, that doesn’t amount to much: Syria’s proven oil reserves stand at 2.5 billion barrels (roughly 0.2 percent of the global share), and its proven natural gas reserves are insufficient to meet even domestic consumption. But Syria’s main value to Moscow, like Turkey, lies in its location as a transport hub for exports.

Russian oil machinations in Syria started well before the Kremlin’s 2015 military intervention. In 2009, Qatar proposed the construction of a pipeline to send gas from the massive South Pars/North Dome field (which it shares with Iran) via Saudi Arabia, Jordan, Syria, and Turkey. At Russia’s behest, Syrian President Bashar al-Assad refused to sign the plan, since Russia feared that the deal would diminish its own role in Europe’s natural gas market. As an alternative, Russia reportedly gave its approval to the construction of the Iran-Iraq-Syria pipeline under the assumption that it would have an easier time dealing with Iran than with Qatar.

The ensuing revolution placed those plans on hold, but Russian activity is likely to increase as Syria turns to reconstruction. Assad has already stated that reconstruction will likely cost between $200 billion to $500 billion, with first priority in all contracts going to Moscow. With the Trump administration deciding to leave Syria as Russia remains firmly ensconced there, any energy infrastructure projects that transit through Syria will need Moscow’s approval. Indeed, Russia is already poised to reap major rewards as the United States abandons Syria’s largest oil field with its withdrawal.

Moscow’s involvement in Lebanon has a Syria angle as well. Russia has deepened commercial ties with Lebanon as part of its efforts to roll back U.S. influence in the region, with trade between Russia and Lebanon nearly doubling from $423 million in 2016 to $800 million in 2018. Lebanon’s offshore oil and gas sector has also favored Russian companies. The Russian firm Novatek won a 20 percent stake in two offshore exploration blocks last year. More blocks are expected to be auctioned this year.

But Russia’s primary interest in Lebanon is as a conduit to Syria. In January, Rosneft signed a 20-year agreement for managing and upgrading an oil storage facility in Tripoli, Lebanon, which lies just 18 miles from the Syrian border and is 37 miles from the Russian-controlled Syrian port of Tartus, Moscow’s only foothold on the Mediterranean Sea. The deal’s value has been kept secret, but the facility’s proximity to Syria could allow Moscow to use it for covert fuel deliveries to the Assad regime—an activity U.S. Treasury sanctions have sought to thwart.

None of this is to say that Moscow’s energy land bridge is an imminent reality. Syria’s reconstruction remains several years away, and the country’s value as an energy hub will be worthless as long as it is under crippling U.S. sanctions. Turkey and Iraq hold the most immediate promise for Moscow’s energy ambitions, while Russian involvement in Lebanon and Syria demonstrates that Moscow is digging in for the long game in order to secure and expand its energy monopoly over Europe.

If Russia succeeds in its plans, the implications for European security will be profound.

But if Russia succeeds in its plans, the implications for European security will be profound. A Europe even more dependent on Russian gas will lose significant leverage over the Kremlin, constraining its ability to punish the country for transgressions like the killing of Russian defectors on European soil. There would be little to prevent Putin from turning off the gas taps to Europe, as he has in the past, should political squabbles arise. With Europe’s energy demands projected to increase, European countries risk entering a vassal-like relationship with Moscow.

Russia’s plans could also diminish influence in a region where Washington has historically been the prime security guarantor. As Washington is disengaging from the Middle East, Moscow is doing the opposite, using energy projects to buy clout with regional governments. Russia already supports a rogues’ gallery of dictators across the region, including Assad, Libya’s Khalifa Haftar, and Egypt’s Abdel Fattah al-Sisi. Moscow’s political backing for dictatorial, anti-American regimes will intensify as it builds up its regional presence. Moreover, Russia is not likely to share U.S. concerns about proliferation and human rights violations when selling lethal drones and other advanced weaponry to Middle Eastern states.

Pushing back against Russian machinations could prove difficult. Although Cyprus and Israel, staunch U.S. allies, both have significant amounts of proven gas reserves, neither can realistically supply Europe at this point. Development of Cyprus’s offshore sector is hobbled by long-standing conflict with Turkey. Meanwhile, an overland pipeline from Israel to Europe would have to go through Lebanon and Syria, which is impossible, while an underwater pipeline would have to go through Cypriot territorial waters, which would stoke tensions with Turkey. The long-proposed EastMed pipeline, which would export Israeli and Cypriot natural gas directly to Europe via Greece, would take up to seven years to build and poses a significant engineering challenge, as the pipeline would have to be laid in extremely deep waters. Given that most of the region’s current gas discoveries will go toward meeting Middle Eastern demand, further discoveries of natural gas are essential to feed exports to Europe.

Washington is not completely without options, however. The United States could seek to develop alternate gas export routes into Europe by financing the construction of strategic gas import infrastructure on favorable terms in key European markets, including offshore liquified natural gas (LNG) regasification units. These could also serve as a partial—and more flexible—solution to the logistical challenge of exporting natural gas from Israel and other parts of the Eastern Mediterranean. This approach would allow spare gas produced in Israel that is not already committed for export under long-term contracts to be sold to Europe on the more flexible spot market. Such a system would obviate the need to construct more capital-intensive underwater pipeline projects that require financing supported by long-term gas purchase agreements.

Washington could help finance such projects in return for reciprocal commitments from the involved countries to liberalize their gas market regulations, potentially including by unbundling their production and transmission infrastructure, as well as granting third parties equal, nondiscriminatory access to pipeline capacity. This approach would provide space for additional imports that are more competitive with Russia while allowing gas to move freely within the continent from the lowest-cost providers to the greatest demand centers.

Washington could supplement its approach with commitments to facilitate the export of U.S. LNG to Europe, if Moscow were to weaponize its gas exports and turn the taps off. Given that U.S. LNG is currently more expensive than Russian gas for Europe, Washington could subsidize its exports from private producers to Europe as a means to maintain supply and price stability.

Although the current political climate in the United States makes additional financial support to Europe challenging, it is not altogether impossible. U.S. President Donald Trump has signaled that exporting gas to Europe is a priority, and the administration should work with European partners to operationalize that goal and thwart Moscow’s Middle East energy land bridge. Europe’s energy security and America’s influence in the Middle East are too important to cede to Russia.

Varsha Koduvayur is a senior research analyst at the Foundation for Defense of Democracies, where she focuses on the Persian Gulf. Twitter: @varshakoduvayur

Greg Everett is a corporate lawyer with significant experience in the energy industry. Twitter: @Greg_Everett

Putin’s plans to run the TurkStream pipeline through the Balkans won’t end well.

In the medium term, they’ll make it hard for the country to keep up oil production, satisfy domestic demand, and fund the government.

The country may seem a haven for clean energy, but that’s because it exports its pollution.