What’s Behind the Terrorist Attacks in Sri Lanka?

More than 300 people have been killed in simultaneous explosions at churches and hotels in Sri Lanka that also injured some 500 victims. The coordinated attacks took place on Sunday morning.

According to media reports, there were eight blasts in all, including at churches in Negombo and Kochchikade in the country’s west, and Batticaloa in the east. Three luxury hotels in the capital Colombo were also targeted.

Sri Lanka’s government says the attacks were carried out by National Thowheeth Jamaath, a little-known radical Islamist group. Colombo has declared an indefinite national curfew and blocked social media networks such as Facebook and WhatsApp in order to prevent the spread of rumors that might spark intercommunal violence, as happened in March 2018 when Buddhist mobs attacked Muslim mosques, businesses, and homes.

More than 300 people have been killed in simultaneous explosions at churches and hotels in Sri Lanka that also injured some 500 victims. The coordinated attacks took place on Sunday morning.

According to media reports, there were eight blasts in all, including at churches in Negombo and Kochchikade in the country’s west, and Batticaloa in the east. Three luxury hotels in the capital Colombo were also targeted.

Sri Lanka’s government says the attacks were carried out by National Thowheeth Jamaath, a little-known radical Islamist group. Colombo has declared an indefinite national curfew and blocked social media networks such as Facebook and WhatsApp in order to prevent the spread of rumors that might spark intercommunal violence, as happened in March 2018 when Buddhist mobs attacked Muslim mosques, businesses, and homes.

Forty suspects have been detained in connection with the bombings. On Tuesday, the Islamic State claimed responsibility for the attacks but authorities have not confirmed the group’s involvement.

Sri Lanka has more than 22 million inhabitants. Of these, about three-fourths are ethnic Sinhalese, most of whom are Buddhist. About a sixth of Sri Lankans identify as Tamil—either of Sri Lankan or Indian descent—and are mostly Hindu. About 10 percent of the population is Muslim, and 7 percent Christian—a group that includes both Tamil and Sinhalese.

Given that three of the blasts occurred at churches, timed for Easter services, at least part of the attack was aimed at the country’s more than 1.5 million Christians. The almost simultaneous blasts left no time to warn other churchgoers.

Reuters cites the National Christian Evangelical Alliance of Sri Lanka, which represents more than 200 churches and Christian organizations, as having recorded 86 incidents of discrimination, threats, and violence against Christians last year.

The other main targets seem to be people who would frequent Colombo’s hotels—usually a mix of tourists, business people, and wealthy locals. At least 30 of the dead are believed to be foreigners. 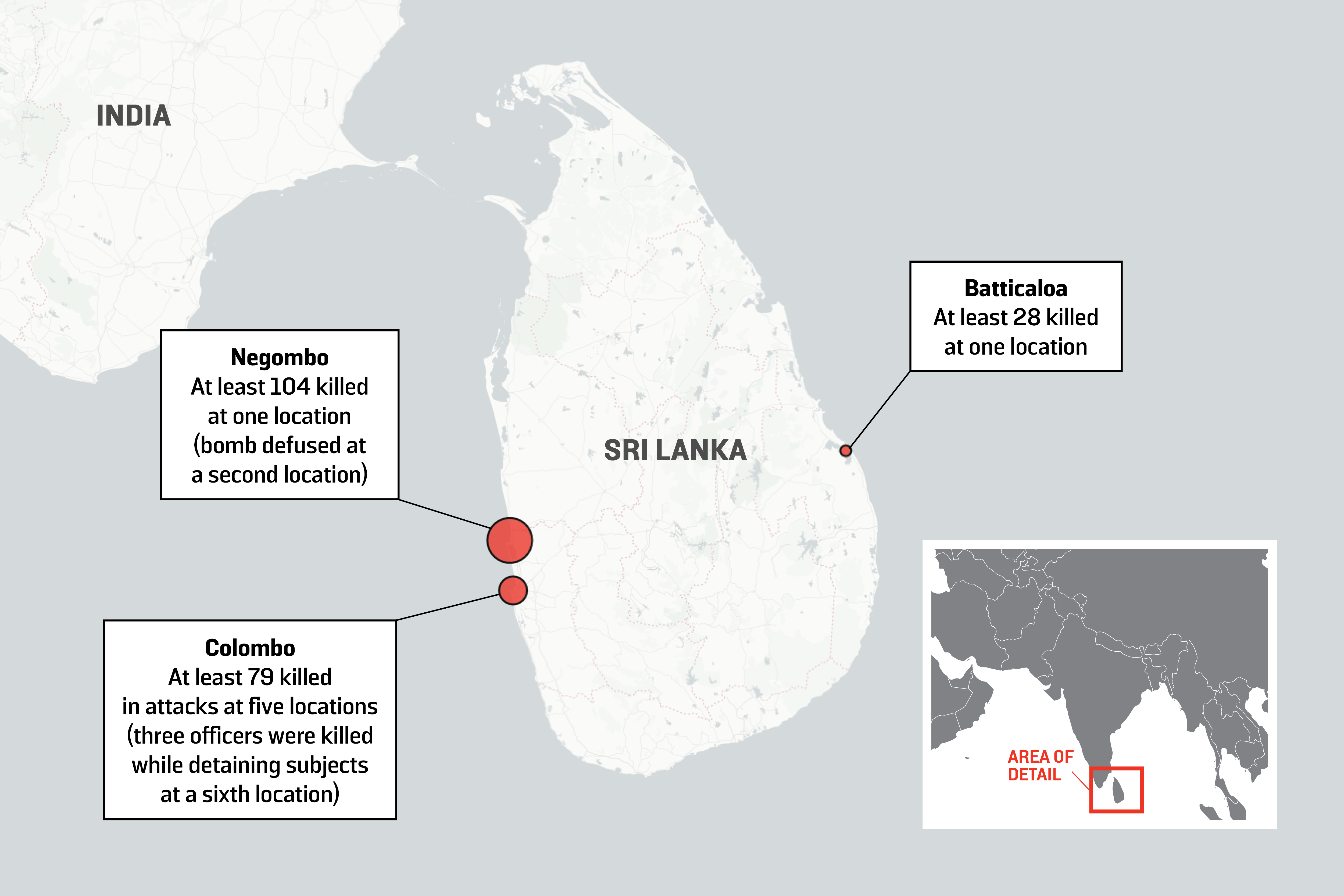 The ability to launch several attacks all at once suggests a degree of sophistication, planning, funding, and reach. While authorities are still piecing together what happened, the blasts bear at least some resemblance to the November 2008 attacks in Mumbai, which simultaneously targeted two luxury hotels, a busy railway terminal, and a Jewish outreach center. According to Indian intelligence, the Mumbai attacks were designed not only to cause the highest possible number of casualties but also to target groups—such as Western tourists—that would lead to the greatest amount of international media coverage. One of the 2008 attackers was apprehended, and the others were successfully identified, leading authorities in India to declare the Pakistan-based Lashkar-e-Taiba militant group responsible. But there are several differences with Sunday’s attacks in Sri Lanka, not least the fact that they were spread out across the country instead of concentrated in a single city, and that unlike in Mumbai, no hostages were taken.

Was there any warning?

On Monday, Sri Lankan Health Minister Rajitha Senaratne addressed a press conference and pointed to outside help: “There was an international network without which these attacks could not have succeeded.”

Speaking to reporters on Sunday, Prime Minister Ranil Wickremesinghe acknowledged that some information about a planned attack had been circulating. “We must also look into why adequate precautions were not taken,” he said.

Wickremesinghe’s comments could be interpreted as a criticism of President Maithripala Sirisena, the commander of the country’s security forces. 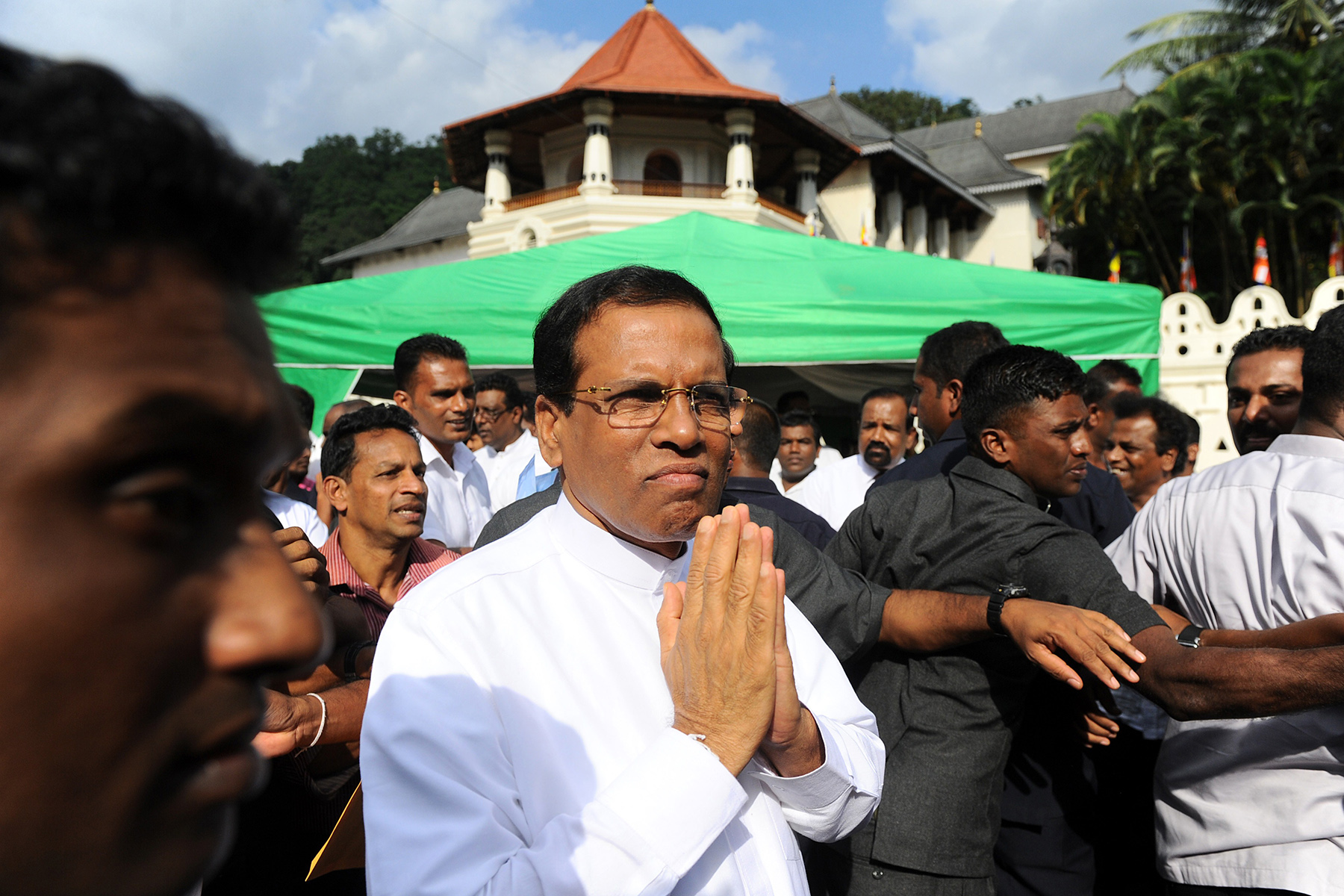 Newly elected Sri Lankan President Maithripala Sirisena gestures to supporters after speaking outside of the Buddhist Temple of Tooth in the central town of Kandy on Jan. 11, 2015. Ishara S.Kodikara/AFP/Getty Images

Sri Lanka’s politics have been in turmoil recently.

Sirisena became president in 2015 after he won a surprise victory over the strongman Mahinda Rajapaksa, who had controlled the country’s politics for more than a decade. Sirisena appointed his ally Wickremesinghe as prime minister, and the two set out to reform the country’s economy and seek accountability for atrocities committed during the country’s civil war.

But Sirisena and Wickremesinghe fell out in 2018, leading the former to suspend Parliament and appoint his onetime rival Rajapaksa as the new prime minister. Weeks later, under pressure from the country’s Supreme Court, Sirisena reinstated Wickremesinghe as prime minister. Relations between the two have not recovered, with observers expecting Sirisena to seek a fresh mandate at the polls.

Meanwhile, Sri Lanka’s economy has grown at a tepid 4 percent, the currency has weakened, and Colombo has struggled to repay loans from donors such as the International Monetary Fund. In one case, Sri Lanka lost a major port—as well as 15,000 acres of land—to China after it could not repay funds it had borrowed for infrastructure projects. 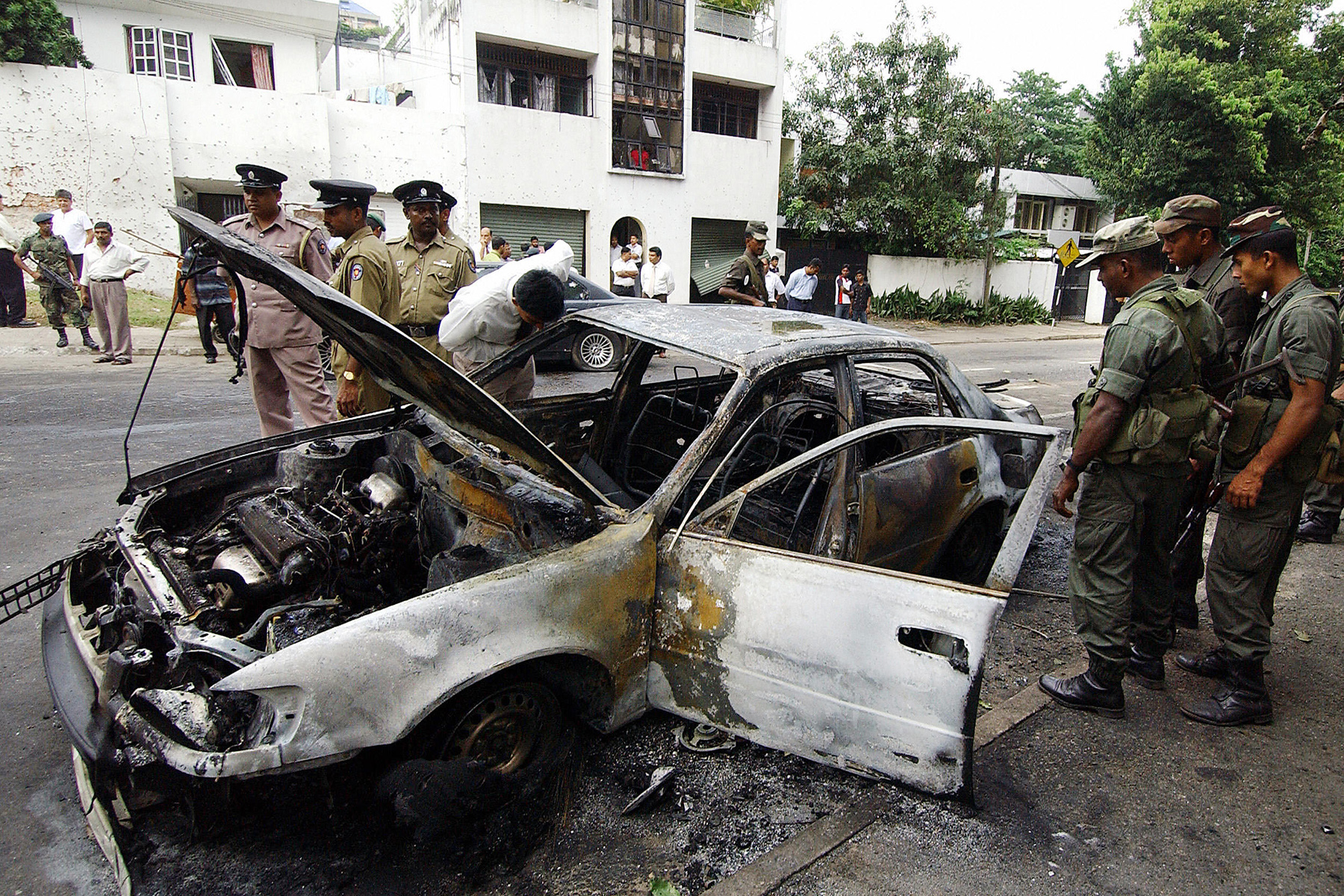 Sri Lankan soldiers examine a wrecked vehicle at the site of a suicide bomb attack on a defense ministry convoy in Colombo on Dec. 1, 2006. Sri Lanka’s Defense Minister Gotabaya Rajapaksa, the brother of the president, narrowly escaped when a suspected Tamil Tiger suicide bomber blew himself up, killing at least two army guards.SANKA VIDANAGAMA/AFP/Getty Images

A history of violence

While it’s unclear if the country’s history played a role in Sunday’s attacks, Sri Lankans have experienced decades of sectarian violence.

In 1948, Sri Lanka, then known as Ceylon, won independence from British rule. The country’s Sinhalese majority, countering what they saw as colonial favoritism toward Tamils, disenfranchised Indian Tamil migrants, leading to the group’s neglect.

That led to the formation of an armed insurgent group known as the Liberation Tigers of Tamil Eelam (LTTE) in 1976. The group initially campaigned for a Tamil homeland in the country’s northeast. But the movement turned violent, with the LTTE attacking police and army forces as it sought greater national prominence. The Tigers became known for their suicide bombings, which they were among the first militants to pioneer, and deployment of child soldiers. In 1997, the U.S. State Department officially designated the LTTE a terrorist group.

For years, Sri Lanka’s army—mostly Sinhalese and Buddhist—carried out campaigns to root out the insurgents from their hideouts in the country’s northeast. The war finally ended in 2009 after the army killed LTTE leader Velupillai Prabhakaran. But watchdog groups say both the LTTE and the army were guilty of war crimes and rights abuses. According to the United Nations, about 40,000 civilians were killed in the final stages of the civil war.

Tourism dropped sharply during the war years, hitting a low point after a tsunami devastated Sri Lanka in 2004. There were only 500,000 visitors in 2009; the industry has since recovered to attract 2 million visitors last year.

Even so, the tensions of Sri Lanka’s bloody history have lingered. The final, intense period of the civil war left hundreds of thousands of Tamils displaced, thousands of whom are still missing. Communal tensions reignited last year: In the central district of Kandy, Buddhist Sinhalese mobs attacked mosques and Muslim establishments. In response, Colombo imposed a nationwide state of emergency.

In 2016, Sri Lankan authorities reported that 32 Sri Lankans had joined the Islamic State, but the terrorist group is not known to have a presence in the country.

This story has been updated to reflect recent developments.

U.S. Wants Answers About China's New Base in Cambodia

Can China's State Media Become as Trusted as the BBC?

A nationwide movement of this scale has no post-1989 precedent.