Thirty-three years after the Chernobyl meltdown, parts of the contaminated zone have become attractions. In others, a harsher reality persists.

Mariya smiled but with sad eyes. She, her husband, and her daughter live in a one-room apartment in a dormitory in Gomel, northeastern Belarus. They share a restroom and kitchen with dozens of other families. She told me about her fifth birthday, on April 27, 1986: “I was so excited that even now I can remember that day. It was a very hot but rainy summer.” Her parents, she said, made her a bath so she could celebrate her big day in style. “We were living in the countryside with no running water, so papa was collecting rainwater in a special tube. I took a bath in this water, washing my skin, eyes, lips, hair. It was so refreshing.” She’s 38 now, and for the last six years she has suffered from a rare cancer of the salivary glands that has metastasized to her lungs.

With no family history of cancer, she believes that the rainwater is to blame. “We were not informed,” she said, that by the morning of her birthday, the “rainwater had already been polluted with radioactive contamination.” 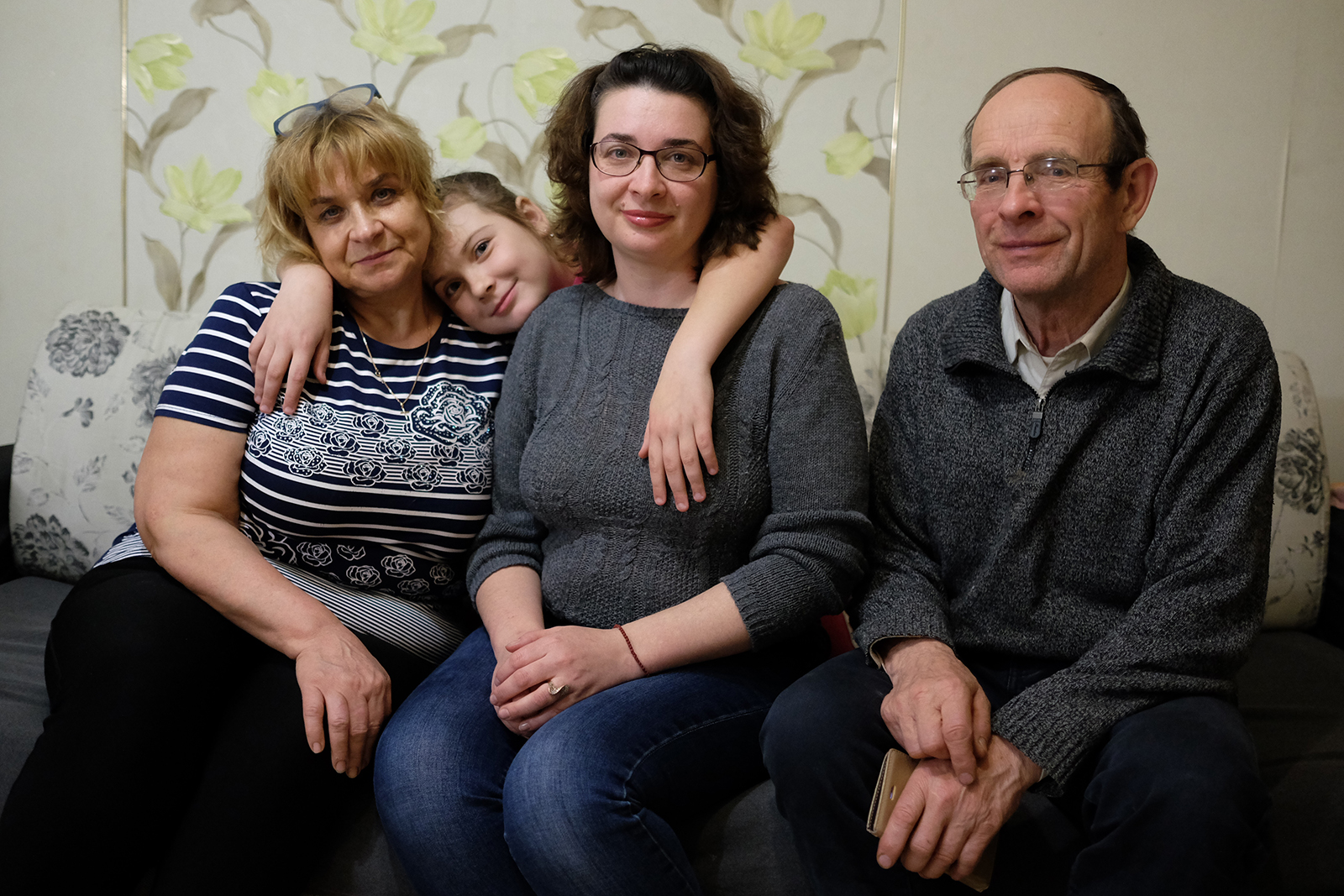 In 1986, the night before Mariya’s birthday, the No. 4 reactor at the Chernobyl nuclear power plant exploded. The breakdown resulted in one of the worst ecological catastrophes ever recorded.

Nearby areas, including, most famously, the Ukrainian town of Pripyat, were evacuated. The infamous Chernobyl Exclusion Zone, or “Zona,” is still abandoned, although today it is rather full of tourists. In 2018, more than 60,000 visitors toured the Zona in Ukraine compared with 18,000 in 2013, according to Kiev’s Tourism and Promotion Department. More than two-thirds of them were foreigners, and Chernobyl excursions are gaining popularity among both private tourists and companies organizing incentive trips for their employees.

Meanwhile, the post-apocalyptic wasteland has inspired countless video games (the S.T.A.L.K.E.R. series and Chernobylite, which is in production by a Polish company and managed to bring in more than $100,000 in an April Kickstarter campaign), movies (the horror film Chernobyl Diaries), and books (Locket Full of Secrets by Dana Burkey) full of mutated people, terrifying creatures, and dark crimes.

Although the Ukrainian Zona has gained international interest, few know of the desolated world just on the other side of the Ukraine-Belarus border. In 1988, the Belarusian branch of the Communist Party designated the Belarusian regions adjoining Chernobyl as the Polesie State Radioecological Reserve, or “Zapovednik” (from the Russian word for “reserve”). 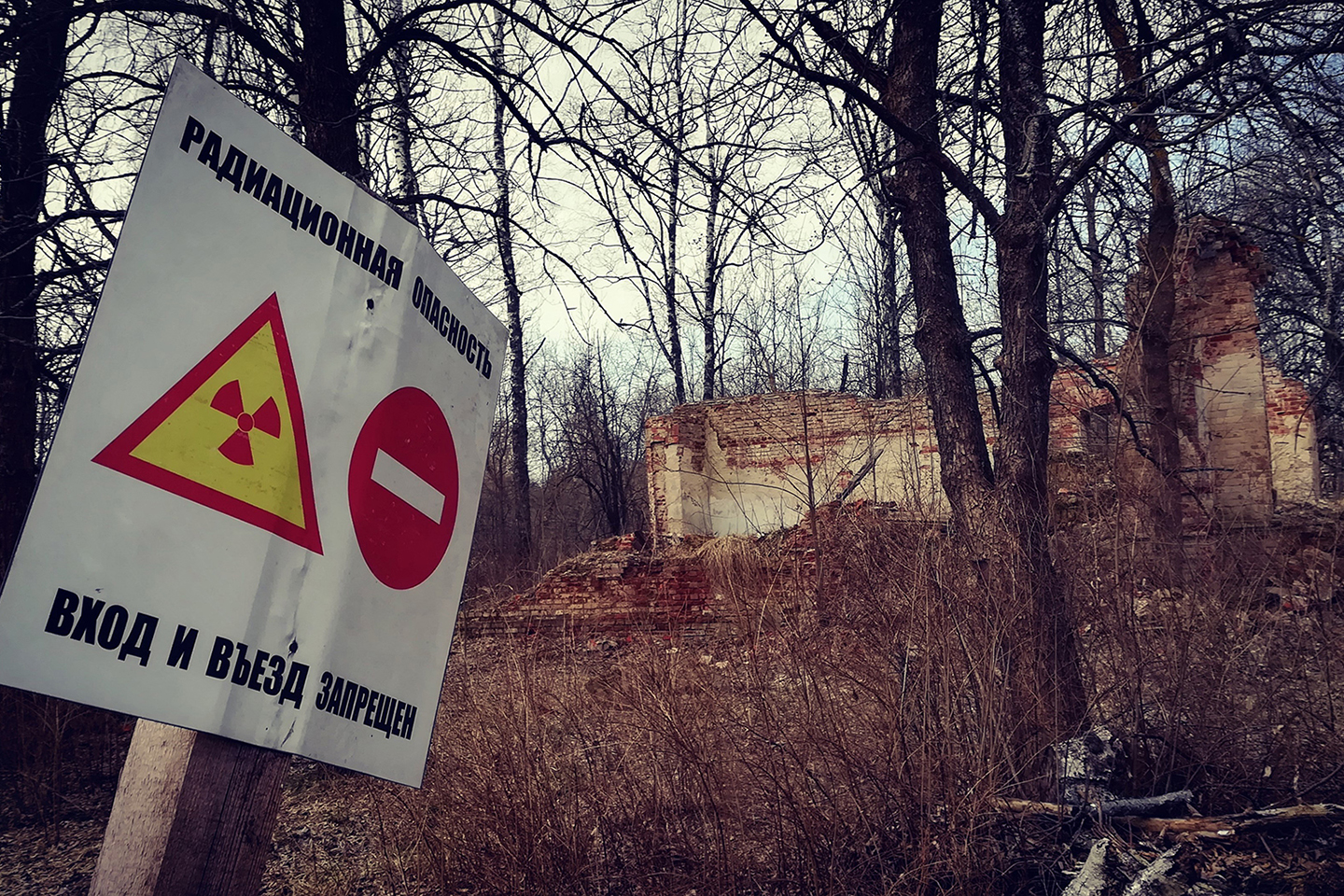 A radiation and European bison hazard sign on the road to the deserted village of Ostroglady, Belarus, on April 11. In the exclusion zone, wild nature is flourishing, which means not only radiation but also wild animals—such as wolves and bison—pose a threat to trespassers.TOMASZ GRZYWACZEWSKI for Foreign Policy

“It was my classroom,” said Adam Woroniec, a retired geography and history teacher, as he picked up a piece of a crushed globe. Desks, blackboards, and school supplies vanished a long time ago. The three-story building howled in the wind. In the gym, the remnants of wall murals commemorated the 1980 Summer Olympics held in Moscow. “We had been playing volleyball here before the disaster happened,” he said, reminiscing.

Out of the compound, we strolled down an alley. A yellow sign warned of the radioactive hazards—advice the birds twittering around us did not heed. The road was crumbled, and the shapes of abandoned building emerged from behind thick walls of brush and trees. Most of the buildings—the post office, general store, a town hall—were made of timber with only a few white bricks sprinkled in.

At the entrance to one building sat a bunch of old newspapers, including the Red Star, Labor, and Teacher’s Journal—all of them dated from September 1986, when the village was evacuated.

It was five months after the meltdown—plenty of time for thousands of rainwater baths. From the very beginning, the Soviet authorities attempted to conceal the real size of the disaster. Inhabitants of this particular village were only officially informed about the catastrophe on May 8. What is worse, authorities apparently could not decide what to do. First, they removed children, leaving the adults in place. Residents of villages located closer to the power plant were moved to locations further north, which were also eventually evacuated—sometimes years after the initial explosion—when the authorities finally built new houses to accommodate displaced persons. 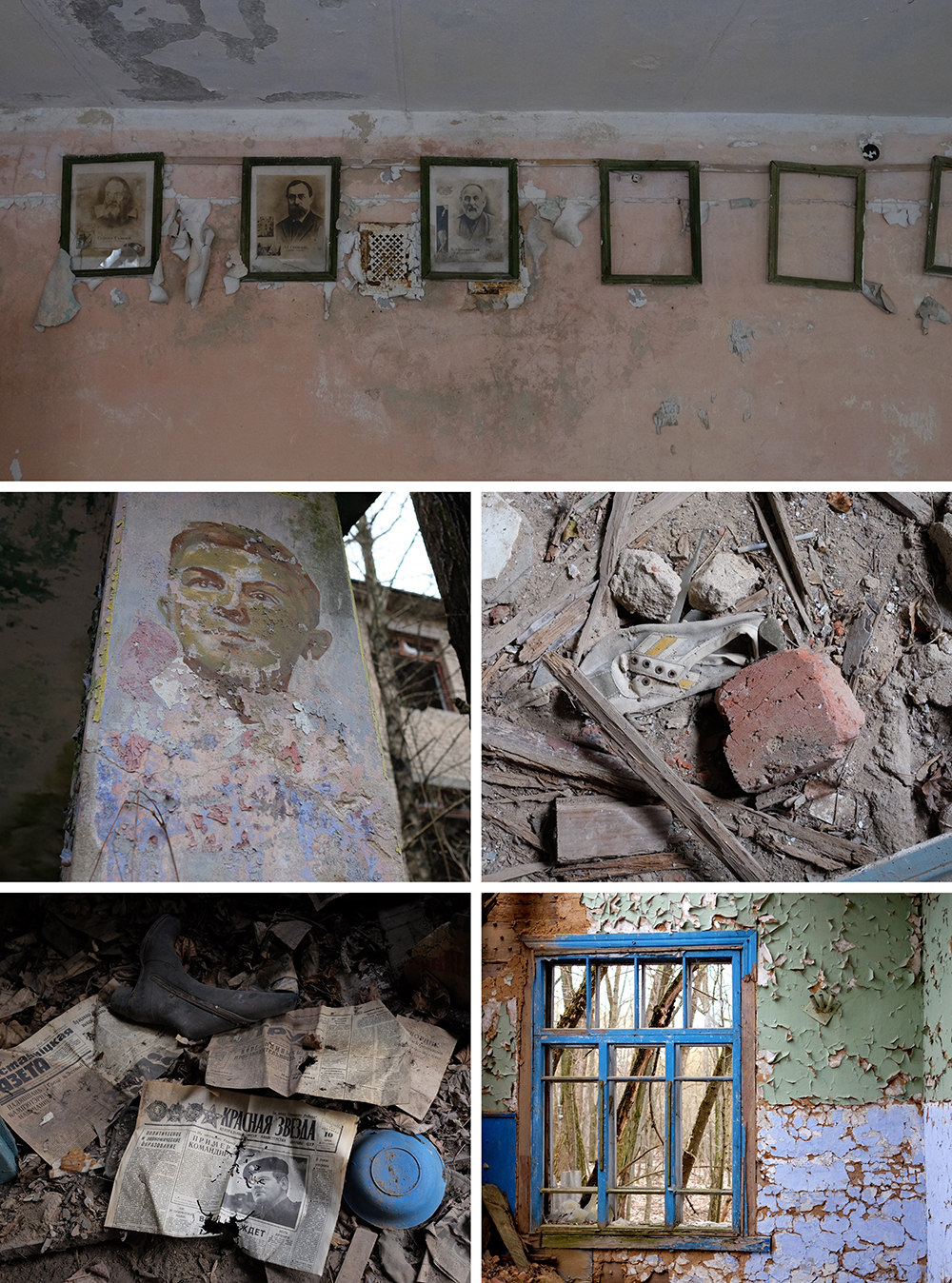 What was left behind at a school and house in the deserted village of Ostroglady, as seen on April 12: portraits of famous researchers in a former science class, a mural of a young man at the entrance to the school, shoes on the floor of the men’s cloakroom, and newspapers from the time the evacuation started after the Chernobyl disaster.TOMASZ GRZYWACZEWSKI for Foreign Policy

In the village, we stopped outside a ruined wooden house. Under a thick layer of dust, the floor was rotten and squeaked dangerously with each of his steps. “It used to be our home, and here was our children’s bedroom,” he said, taking in the walls still decorated with scraps of geometrical tapestries. “I would like to show my daughter how our family nest looked like. Mariya has never been here since that happened.”

In September 1986, Woroniec, his wife, and two children were yanked out of their home and deposited with a family who had agreed to host them. After a year and a half, they were moved to one of many identical houses in the village of Ut, which was built by the authorities for people displaced from Zapovednik.

Mariya, after graduating from university, was employed by a factory in the town. It provided housing in a workers’ dormitory. Although she still lives in the dorms, she was eventually unable to continue working. Today, she receives less than $100 a month in invalidity pensions. Her husband takes on odd jobs; he spent some time in Poland sending money back home. “If it was not for my parents’ support,” Mariya said, “we would not make a living, so we cannot even dream about our own apartment.” 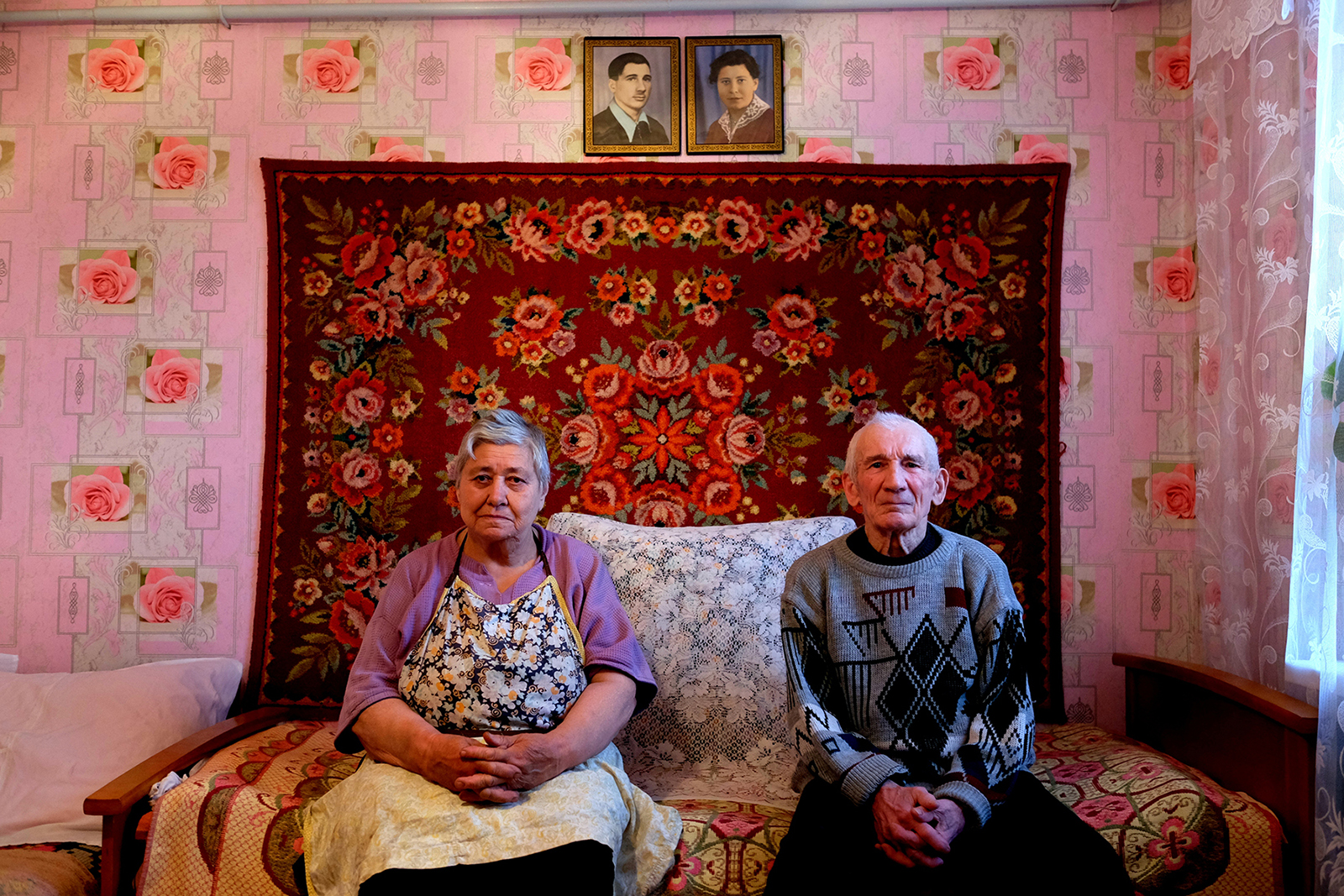 Hanna and Siemion in Ut on April 11.TOMASZ GRZYWACZEWSKI for Foreign Policy

“In dreams, I always see only my old home. Everything was gone. The farm, family memorabilia, graves of my parents and siblings. They let us take only the personal documents,” Hanna said. “They said we were leaving for a month, maybe a year, but we left forever.”

Hanna, almost 80, and her husband, Siemion, in his 90s, also live in Ut. One resident said there are about 25 families on this street but in recent years 30 people had died.

A few hours’ drive east, on the edge of the Zapovednik, Nadia told her story. She was trying to gesticulate, but her horribly twisted hands made that almost impossible. She was paralyzed from the waist down several years ago and since then has been bedridden. She tried to grab one of the dozens of medicines sitting on a nearby cupboard, but it slipped away from her fingers. 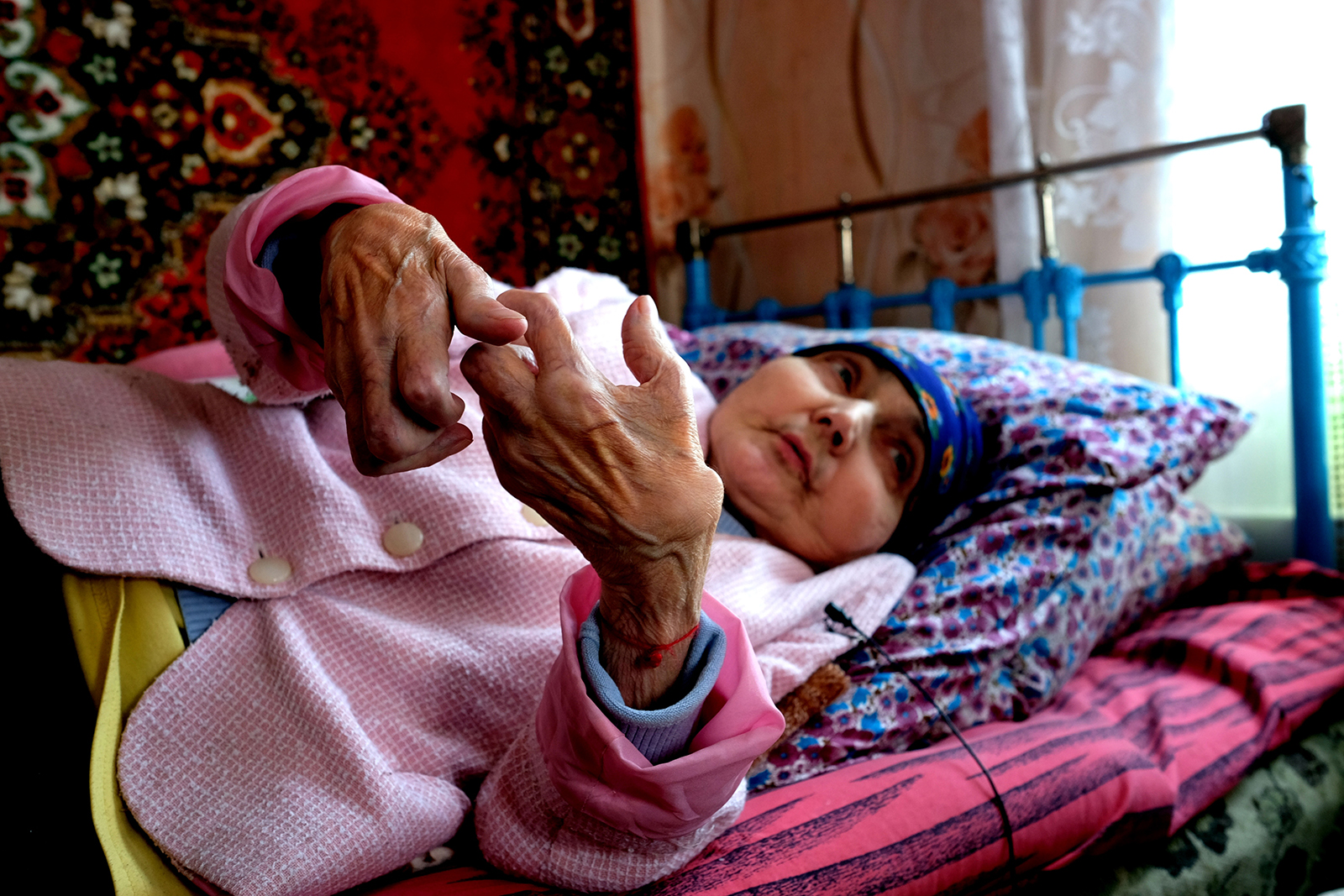 Nadia, who is paralyzed from the waist down, at her home on the edge of the Zapovednik on April 10. TOMASZ GRZYWACZEWSKI for Foreign Policy

“No one told us that something terrible had happened.” In fact, on May 1, 1986, all the children, adults, and the elderly were forced to participate in an open-air parade celebrating Labor Day. The village where she lives is half displaced. The authorities recommended that inhabitants evacuate but didn’t require it. So the young fled, and the elderly remained in place. Nadia spoke quickly, as if she were afraid that she wouldn’t make it through everything she had to say. “It is my and my ancestor’s homeland. How can I leave it? If I give up, this place will be erased from the Earth.”

Behind Nadia’s cottage, a tall man stared into a void. In front of his eyes stretched a field covered with spring-green grass. “Here was my family home,” he said without taking his eyes off the meadow. “Outside the porch, my mom had planted flowers, but Soviet authorities ordered us to remove them because it was common space not designed for flowerbeds.” When everyone moved out, the house was demolished and burned down to entomb the radiation deeply inside the soil.

There are around 200 people left in the village. Old contaminated houses are pulled down as their residents die, and the area’s future is vague. It might be totally erased, or the authorities—eager to reinvigorate agriculture in the area—might try to settle new inhabitants there and revive it. 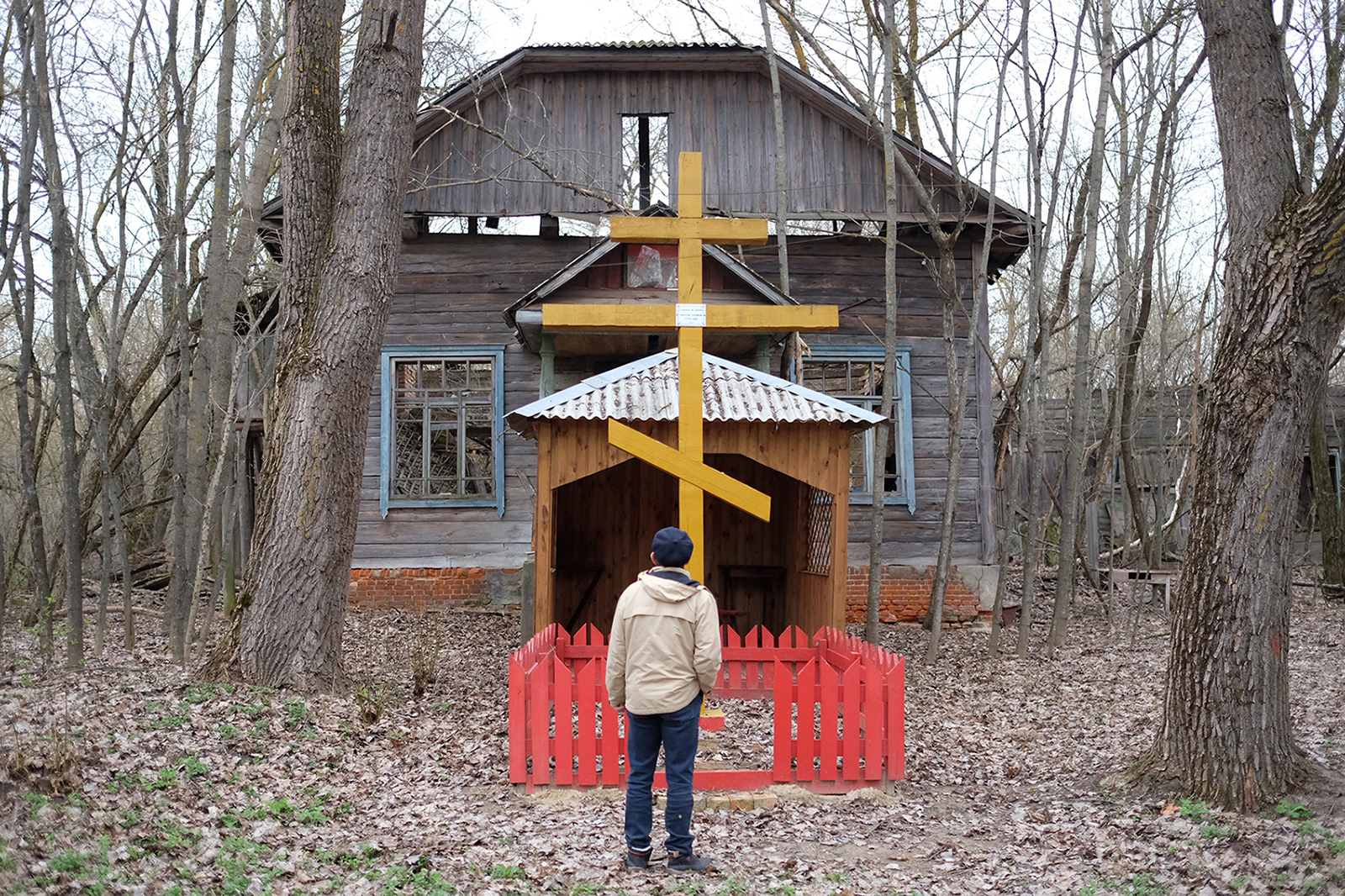 Woroniec looks at the ruined Orthodox Church in the deserted village of Ostroglady on April 12.TOMASZ GRZYWACZEWSKI for Foreign Policy

Thanks to the direction the wind was blowing just after the explosion, Belarus was most severely affected by the Chernobyl disaster. About 70 percent of the fallout from the reactor landed there, and one-fifth of the country’s agricultural land was contaminated. Pouring rain spread radiation to the regions lying hundreds of miles away from Zapovednik.

The long-lasting health effects of the exposure to the radiation are still highly contested by scientists, environmentalists, and state officials. Minsk claims that the nuclear threat has been overcome and has systematically reduced the range of closed zones, restored agricultural production near Zapovednik, and even announced its partial opening for tourists.

Doctors and researchers emphasize that it is nearly impossible to prove a connection between exposure from the meltdown and a rise in the rate of chronic disease. However, according to a UNICEF factsheet, in 2011-2016 there was a 14 percent increase in children registered with disabilities in Belarus. And whatever the data, ordinary people still have their own opinions. “Here in Belarus, everyone knows someone who is ill,” said Irina Fisyuk, the head of Mogilev’s chapter of the Belarusian Children’s Fund, which provides aid for disabled and seriously ill children.

In a cozy bar in Mogilev’s city center, Denis Vasilkov told me about a rock concert he had been photographing the day before. He is a journalist working for the independent information website Tut.by. Born two months after the Chernobyl disaster, he was diagnosed with serious cataracts in both eyes a few years late. If not for the determination of his father, who first arranged two operations in Moscow and then a final one in Germany, he would be half-blind today. “I would have never become a journalist or photojournalist,” Vasilkov said. “And when I think about my life, I have two things in my head: the Soviets, who deprived me of eyes … and Europe, which returned them to me.”

Whatever the truth about the contamination and disease affecting Belarusians, the trauma from the event is undeniable. It set the stage for the dissolution of the Soviet Union—foreign charity programs gave thousands of young people the opportunity to travel outside of the bloc (and later Belarus) for treatment. Abroad, they could see how Western liberal democracies really worked. Meanwhile, trust in government authorities is still low, and young people are still striving for a freer and more democratic Belarus.

Tomasz Grzywaczewski is a journalist in Poland.