Fears of crony capitalism in the United States are misplaced.

The basic view that big business is pulling the strings in Washington is one of the major myths of our time. Most American political decisions are not in fact shaped by big business, even though business does control numerous pieces of specialist legislation. Even in 2019, big business is hardly dominating the agenda. U.S. corporate leaders often promote ideas of fiscal responsibility, free trade, robust trade agreements, predictable government, multilateral foreign policy, higher immigration, and a certain degree of political correctness in government—all ideas that are ailing rather badly right now.

To be sure, there is plenty of crony capitalism in the United States today. For instance, the Export-Import Bank subsidizes U.S. exports with guaranteed loans or low-interest loans. The biggest American beneficiary is Boeing, by far, and the biggest foreign beneficiaries are large and sometimes state-owned companies, such as Pemex, the national fossil fuel company of the Mexican government. The Small Business Administration subsidizes small business start-ups, the procurement cycle for defense caters to corporate interests, and the sugar and dairy lobbies still pull in outrageous subsidies and price protection programs, mostly at the expense of ordinary American consumers, including low-income consumers.

And these days, the footprint of such crony capitalism appears especially prominent because of U.S. President Donald Trump, who is a preeminent practitioner of the doctrine. 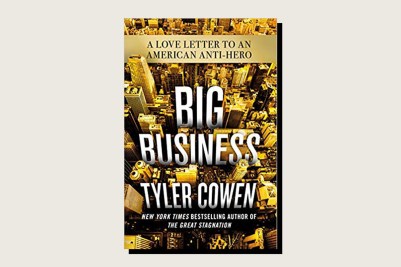 All that said, the data just does not support the view that big business is the dominant force shaping the U.S. government today. For instance, corporations spend about $3 billion a year lobbying the federal government. That sounds like a lot of money, but it is very little in comparison to the approximately $200 billion they spend each year on advertising. To put the $3 billion in perspective, that is about equal to how much General Motors spends on advertisements during a year; Procter & Gamble is higher yet, spending $4.9 billion a year on advertising.

If corporations have such amazing influence over federal policy, why are they spending only $3 billion or $4 billion on lobbying when they could be investing at a more fervent pace and shifting around the allocation of much, much more government money? Well, corporations aren’t actually so much in control.

The Citizens United Supreme Court decision of 2010 has contributed to the impression that corporations are all-powerful in U.S. politics. After all, a company, whether for-profit or nonprofit, can now spend money on campaigns and so-called electioneering communications without general restrictions. It sounds like big business has been taking over U.S. politics and there are no longer laws to stop it.

But, in fact, Citizens United is one reason big business has lost influence in Washington. Individuals too can now spend billions of dollars to attempt to advance their intellectual and ideological agendas. While most of these individuals are businesspeople and earned their money through business, being a donor on that scale selects for those who already have very strong ideological commitments. It doesn’t make sense to spend that amount of money to advance narrow business interests, and indeed the political spending of big business proper, through the businesses themselves, never has come close to the level of what individuals are now laying out. No matter what you think of the Citizens United decision, it seems to have heralded an era in which the influence of ideology is rising and the role and power of mainstream business is diminishing.

Arguably business is more influential through lobbying than through campaign contributions, but even there the numbers are less intimidating than many people might think. As of 2007 (more recent exact numbers are hard to find), the business lobbyists with the biggest Washington presence were Blue Cross Blue Shield (56 in-house lobbyists plus 30 connections with lobbying firms), Lockheed Martin (31 lobbyists and 53 firm connections), and Verizon (21 lobbyists and 58 connections), and those companies were in fact getting a lot of favors, or sometimes just forbearance, from the federal government. Or if we look at spending, the companies doing the most lobbying are General Electric, Altria, AT&T, and Exxon.

Overall, lobbyists are not running the show.

But overall, lobbyists are not running the show. The average big company has only 3.4 lobbyists in Washington, and for medium-size companies that number is only 1.42. For major companies, the average is 13.9, and the vast majority of companies spend less than $250,000 a year on lobbying. Furthermore, a systematic study shows that business lobbying does not increase the chance of favorable legislation being passed for that business, nor do those businesses receive more government contracts; contributions to political action committees are ineffective too.

If you are looking for a villain, it is perhaps best to focus on how corporations sometimes help poorly staffed legislators evaluate and draft legislation. But again, national policy isn’t exactly geared to making businesses, and particularly big business, entirely happy.

Look at the main features of the federal budget. The two biggest programs are Social Security and Medicare, both of which are extremely popular with the American public. And since the elderly vote at disproportionately high rates, politicians usually compete to defend and extend these programs. Surely lobbying by hospitals and doctors is one major reason Medicare costs so much; for instance, Medicare is prohibited from negotiating to drive down the prices of prescription drugs, and hospitals have forced into federal policy a high-cost model for U.S. health care. That’s one of the biggest influences of corporations on the federal budget, but it is very much within a voter-driven context.

Farm subsidies are the clearest and most egregious example of a government policy driven almost completely by corporate special interest groups. But even those subsidies are about $20 billion a year (varying with market conditions), out of a federal budget of more than $4.4 trillion. Another policy area where corporations exert a very strong influence is intellectual property law. For instance, in international trade treaty negotiations, the United States government always insists on very tough provisions for patent and copyright protection. That is because the United States exports so much intellectual property and those exporting companies have influence over the treaty process, not because voters demand tough intellectual property law. There is some indirect effect through voters, however, because weaker enforcement might lead to a loss of jobs in intellectual property-exporting industries, which would hurt some voters. So even when corporations seem to be in charge, very often there is an indirect voter influence in the background.

The most controversial expenditure on state budgets is Medicaid. There I do see the so-called medical-industrial complex as playing a significant role in pushing for more Medicaid spending, in both the state and federal components of the program. Medicaid is less popular than Medicare because its official purpose is to serve the poor rather than the elderly (obviously the two categories overlap somewhat), and thus it needs an extra push from the medical establishment. Whether or not you agree with the idea of boosting Medicaid spending, in this case the medical establishment actually is helping to realize a priority of the progressive left.

Overall, though, the influence of big business on politics is overstated—even in 2019. For all of his pro-business rhetoric, Trump has been pro-business only in an unpredictable, lurching fashion, and his general tone, manner, and method have been more anti-business. Right after his election, a variety of corporations, including Carrier, Ford, and Boeing, were the targets of his needling tweets. Trump has also initiated a series of trade wars and opened up a rhetorical war against America’s trade agreements, and although business tends to be pro-immigration—both because it brings in more customers and because it boosts the available labor supply—Trump made opposition to both illegal and legal immigration a defining characteristic of the early days of his administration.

Lastly, the constant churn of events under Trump is antithetical to the general and largely justifiable business desire for predictability and political stability. Trump in some key regards likes to favor crony businesses, but it is hard to avoid the suspicion that he does not really know how business works, in spite of having spent his whole life in this vocation.

From Big Business: A Love Letter to an American Anti-Hero by Tyler Cowen. Copyright © 2019 by the author and reprinted with permission of St. Martin’s Press, LLC.

If the U.S. Government Won’t Act, Airbnb Will

While the White House rubber-stamps Benjamin Netanyahu’s every move, the online rental company is cracking down on Israel’s illegal settlements.

If the U.S. Doesn’t Control Corporate Power, China Will

Laissez-faire economics has left firms bending the knee to Beijing.