How Dangerous Are U.S.-Iran Tensions?

Washington cites Tehran’s “warnings” in deploying a carrier strike group to the Persian Gulf. The question is whether the threat is real.

Just days after the Trump administration put the final chokehold on Iranian oil exports, part of its plan to apply maximum pressure on Tehran, U.S. officials added to the tension over the weekend by sending an aircraft carrier to the Persian Gulf region and describing the move as a way to deter Iran from taking any aggressive action against U.S. interests.

U.S. National Security Advisor John Bolton said Sunday night that the carrier group and a bomber task force were being dispatched to the region in response to “a number of troubling and escalatory indications and warnings” about Iranian reprisals for U.S. sanctions pressure. Bolton said that “we are fully prepared to respond to any attack, whether by proxy, the Islamic Revolutionary Guard Corps, or regular Iranian forces.”

Last month, as President Donald Trump’s White House made clear that short-term exceptions permitting some Iranian oil trade would be discontinued, Iran talked of striking back at the United States, including a renewal of the country’s perennial threat to close the vital Strait of Hormuz to commercial shipping.

U.S. Secretary of State Mike Pompeo, on a trip to Finland, said Monday that “it is absolutely the case that we’ve seen escalatory action from the Iranians.” The New York Times reported that the threat appears to be directed at U.S. troops in Iraq, as well as in “waterways where Iranian maritime forces operate.”

Last week, the new, tighter sanctions went into effect, and experts expect they will drive Iran’s oil exports down from about 1.1 million barrels a day to perhaps 200,00 to 300,000 barrels a day, severely damaging Iran’s already-reeling economy.

Why is Hormuz so important?

The Strait of Hormuz is one of the most critical chokepoints in the world. Nearly one-third of all seaborne crude oil (more than 18 million barrels a day) passes through the 21-mile-wide opening between Oman and Iran, as well as about 30 percent of all natural gas shipped on tankers. The strait is even narrower than it looks, since the deep-water shipping channel used by oil tankers is only two miles wide. Iran, with military presence on a number of islands near the strait and along the northern coastline, dominates that critical body of water.

In theory, that gives Iranian military forces—both its regular military and the Islamic Revolutionary Guard Corps (IRGC)—the opportunity to choke off one of the world’s vital economic arteries, potentially inflicting painful economic losses on regional rivals such as Saudi Arabia, and even the United States. While Saudi Arabia and the United Arab Emirates have some overland pipelines that can ship oil toward the Red Sea, thus bypassing Hormuz and any Iranian threat, those pipelines can only carry a fraction of what currently travels by ship.

That’s why nearly every time Iran feels itself cornered by pressure from the United States or its regional allies, it raises the specter of closing the strait. Late last month, ahead of the U.S. decision to ban all Iranian oil sales, an IRGC admiral said, “if we are banned from using it, we will close it.” Since then, there haven’t been any other overt Iranian threats to close the strait. In another provocative move, the Trump administration also said recently that it was designating the IRGC as a terrorist organization. 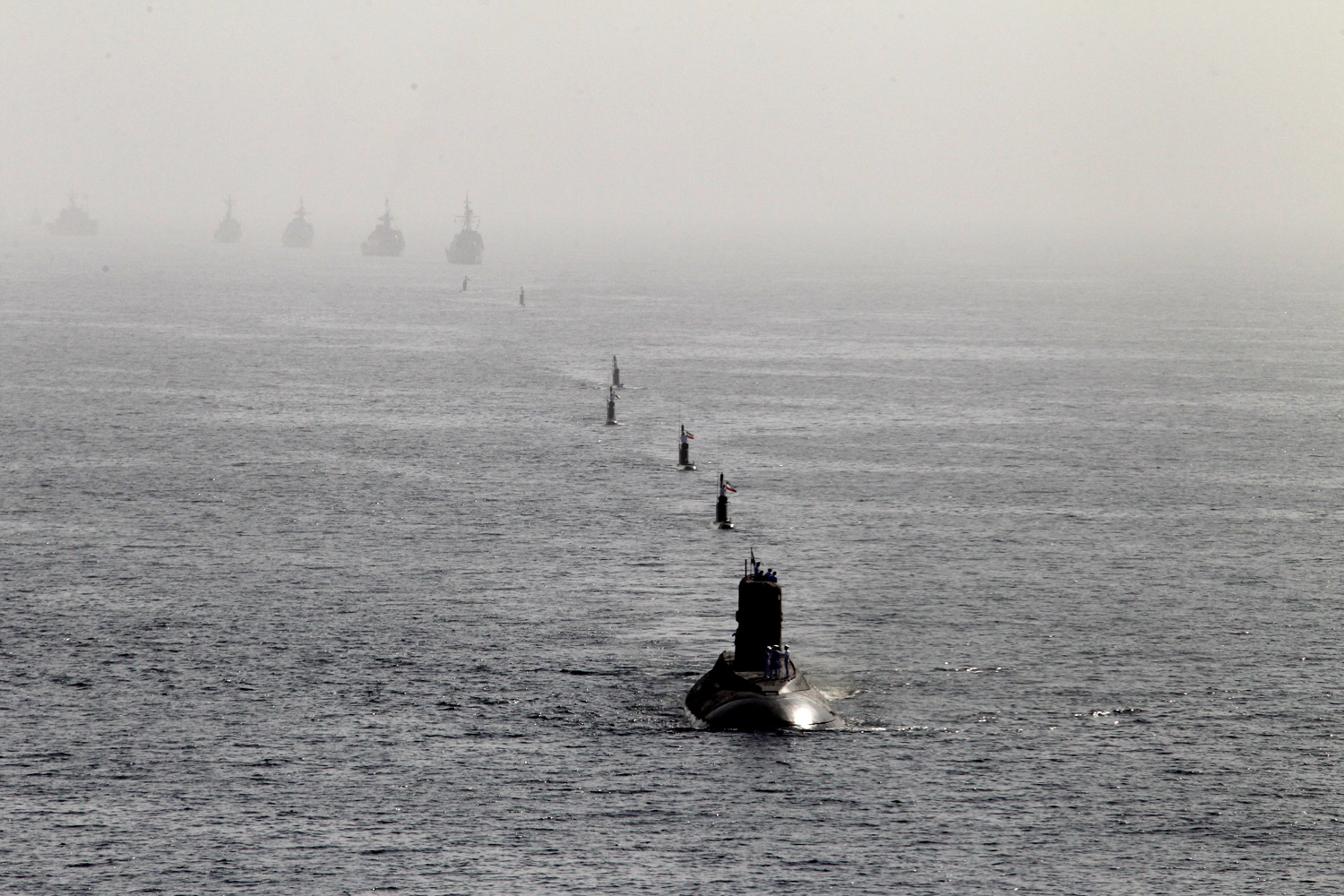 Iranian submarines during an exercise in the Gulf of Oman on Feb. 22. Iran has beefed up its navy, including its submarine forces, to counter U.S. naval dominance.AFP/Getty Images

Iranian forces have plenty of ways to disrupt commercial shipping through Hormuz and the Persian Gulf—though any aggressive action would surely invite a devastating response from U.S. and allied forces in the region.

Iran’s navy has hundreds of small ships and fast attack craft armed with machine guns, rockets, and sometimes torpedoes (as well as mine-laying capabilities) that could wreak havoc with oil tankers traveling through the strait. Earlier this year, in exercises in and around the Strait of Hormuz, Iran unveiled two new ships: an advanced destroyer and a cruise-missile capable submarine. Iran also has older, Kilo-class diesel submarines that could operate (though with difficulty) in the shallow and enclosed waters around the strait.

Other potentially powerful weapons in Iran’s arsenal are anti-ship missiles that could be launched from fixed and mobile launchers on the islands and coastline around the strait. Iran has hundreds of missiles with the range to cover the whole strait that could potentially overwhelm anti-missile defenses. In an infamous 2002 U.S. war game, the “Red” team that represented a nominal Persian Gulf opponent “sank” several big U.S. warships using overwhelming missile volleys and swarming attack boats.

Finally, Iran has thousands of mines—both simpler, old-fashioned contact mines and newer, more sophisticated smart mines. The problem for Iran with mines, though, is twofold. Deploying them from submarines would be stealthier and harder for the United States to detect, but shallow waters make that a tricky operation. Deploying from smaller surface ships is easier, but it’s also much easier to detect in the early stages. And mines that come unmoored and drift can prevent a hazard to all ships—even Iranian tankers.

Haven’t we been here before?

In the Iran-Iraq War in the 1980s, both sides targeted each others’ oil exports, leading to the so-called “tanker war,” which over nearly a decade saw more than 200 oil tankers attacked and more than 50 sunk or seriously damaged. By the waning years of the conflict, U.S. forces began escorting oil tankers through the Persian Gulf to ensure the free flow of oil. There, the risk of Iranian mines was made apparent, with a mine severely damaging a U.S. frigate. And as the British Navy learned in the 1915 Gallipoli campaign, in restricted waters, mines can hammer capital ships, and mine clearance can take an agonizingly long time.

How can the United States respond?

The U.S. 5th Fleet is stationed in Bahrain, and as Bolton said, the carrier Abraham Lincoln is cruising into the area, giving policymakers plenty of firepower to call on for any strikes on Iranian targets. That said, depending on its willingness to incur casualties and massive counterstrikes, Iran could impede shipping through the Persian Gulf area for a limited period of time.

One potential weakness for U.S. and allied forces is minesweeping. The U.S. Navy has 11 active but aging minesweepers, including four deployed to Bahrain. Those ships are vulnerable and require escorts, which would expose additional ships to potential attacks while they try to clear the waterway. That’s one reason the U.S. Navy is trying to overhaul its minesweeping capability by relying less on dedicated minesweepers and more on underwater drones, helicopters, and more than a dozen mine-capable littoral combat ships.

Ultimately, if Iran were to take the drastic step of trying to close Hormuz, it probably could—for a little while.

“While Iran’s asymmetric assets do not provide it with the ability to win a major direct conflict with US forces, the coordinated, simultaneous use of Iran’s submarines, anti-ship cruise missiles (ASCMs), fast-attack craft, and swarm tactics in a first strike could inflict costly losses on US naval forces and commercial shipping in the Strait,” concluded Anthony Cordesman of the Center for Strategic and International Studies in an exhaustive study. “These assets and tactics, in combination with Iran’s large arsenal of naval mines, likely render Iran capable of closing the Gulf for a short while.”

By seeking to cut Iranian exports to zero, the U.S. president is taking a major economic and political risk.

Trump’s new Iran sanctions will hurt the United States in the long term.

Iran’s Hollow Threats to Close the Strait of Hormuz

Tehran is again trying to use its hold over a key global choke point to pressure Washington and others. But it’s much easier said than done.

Benny Gantz Did the Right Thing by Putting His Country First

Is Saudi Arabia Spying in the United States?