In Colombia, refugees are changing how cities work.

CÚCUTA, Colombia—Génesis Sanchez barely survived her first pregnancy. After arriving at the local hospital in her hometown of Valencia, Venezuela, the 25-year-old had been deemed in high-risk condition. The doctors decided she needed a cesarean section, but the clinic was ill equipped to do the surgery. They told her to go to the capital, Caracas. By that point, her labor pains had accelerated too much for her to travel. The family quarreled with the doctors and appealed to friends and relatives to raise money to buy the medical supplies needed to conduct the surgery. After pushing her family to sign a document acknowledging that the family would bear responsibility should Sanchez lose her life, the procedure began. And that is how baby Gabriel came into the world three years ago.

“The crisis was underway, and the government didn’t help us with medical assistance,” Sanchez, now 28, told me in March, referring to the shortages that paralyzed her home country. Last summer, when she was a few months pregnant with her second child and began to experience complications again, she became worried about her well-being. “I told my husband I wouldn’t go through the same situation I had with my first son,” she said. “We came here [to Cúcuta, Colombia].” With little money to finance their trip, the family sold a fan they owned and used the little savings they had to seek a new life in neighboring Colombia.

The lack of health care was just one of the problems Sanchez’s family hoped to leave behind. Since 2015, Venezuela has been mired in a political and economic crisis that has caused inflation rates to soar, rendered its currency worthless, and caused severe shortages of food and other basic supplies. About 3.4 million Venezuelans have fled, and more would surely join them if they could. 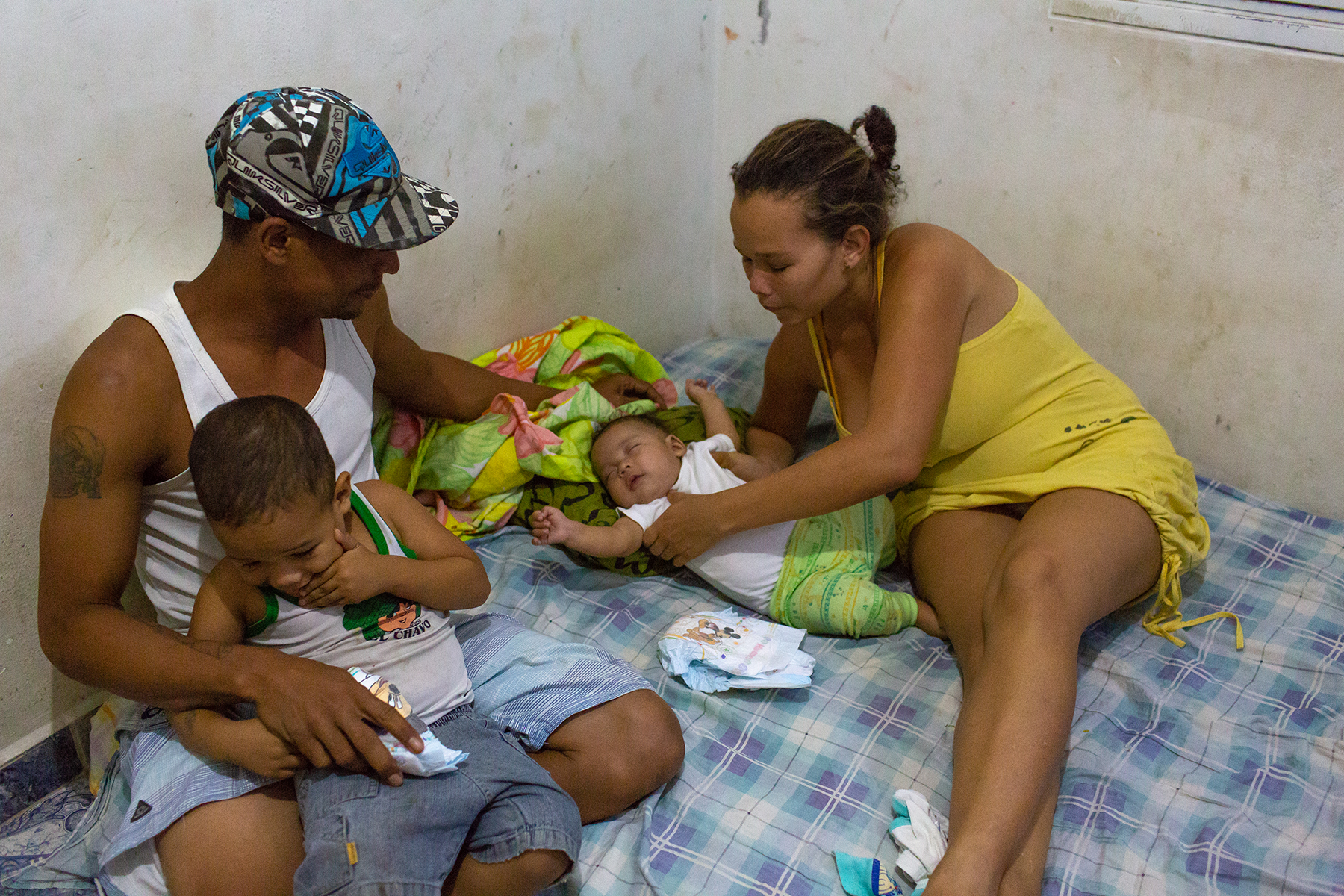 Génesis Sanchez and her husband, Álvaro Mano Salvo Hernandez, with their two small children in their shared apartment in Cúcuta on March 18. They left Venezuela when she was pregnant with their second child and couldn’t get health care there.

Sanchez recalls children back home rummaging through the garbage for food and families surviving on cassava skin. Now, in Cúcuta, life is still hard. Her family of six, including her two children and her sister and sister’s daughter, lives in a dimly lit three-bedroom apartment shared with seven other Venezuelan migrants. Together, the 13 people can just barely scrape together the 75,000 Colombian pesos (approximately $23) in rent due each day. If someone falls behind, others try to pitch in, hoping for the same courtesy later on.

Because Sanchez takes care of the children during the day, the responsibility to earn money rests mostly on her husband, Álvaro Hernandez, who has found a niche in Cúcuta’s strange economy. Shortages in Venezuela compel its citizens to cross into Colombia for the most basic of goods, so he began to work as a porter, helping Venezuelans carry food, toilet paper, medicine, and other basic necessities back home. “Many people carry food for their own use; others carry goods that they will resell, things you can’t find in Venezuela because they are scarce: toiletries, trinkets, soap,” he explained. 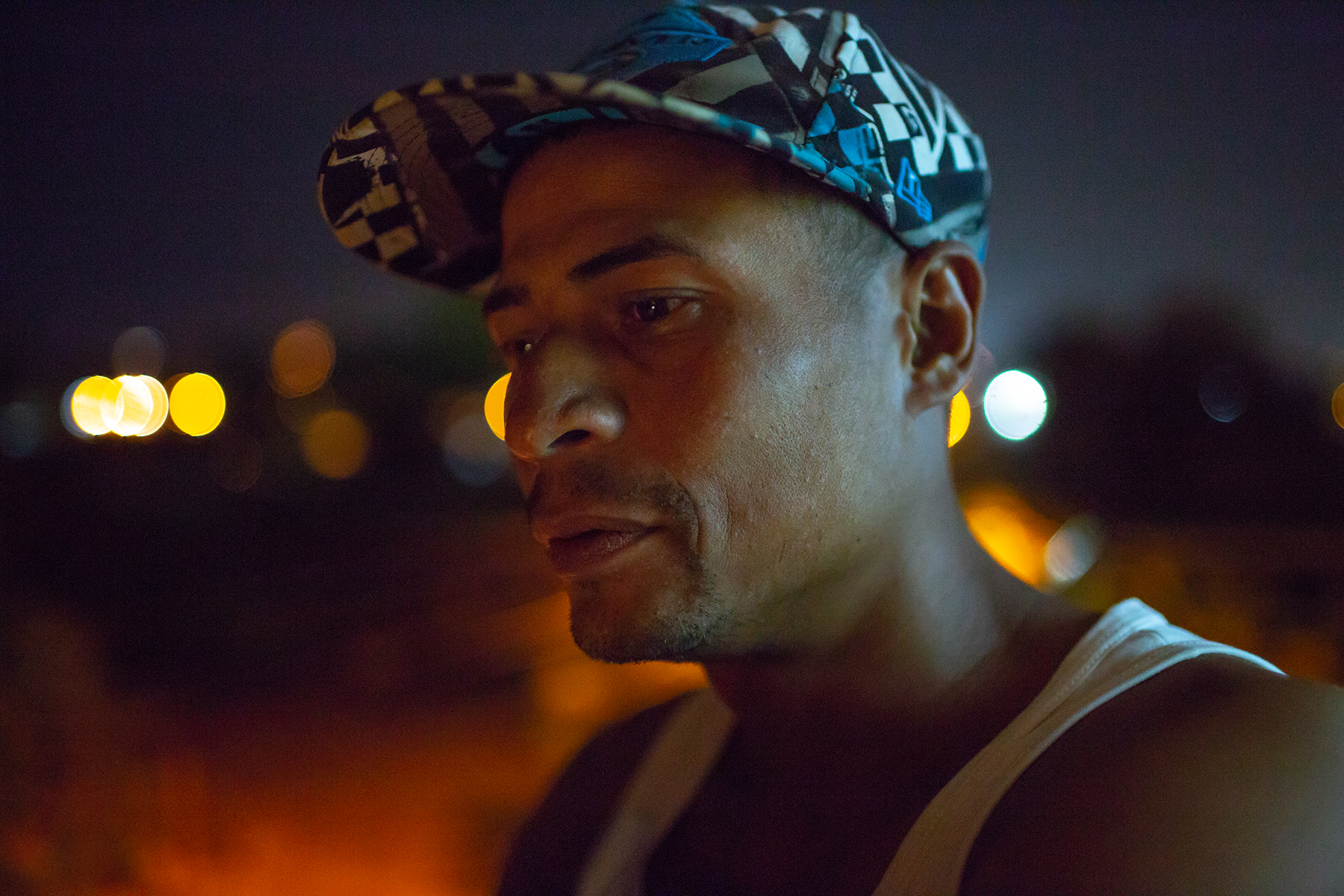 Álvaro Mano Salvo Hernandez, a Venezuelan, lives in a small apartment in Cúcuta with 12 others including his wife, Génesis Sanchez, and their two small children, pictured here on March 18. He has found a niche working as a porter helping Venezuelans carry basic necessities back home.

For the border city of Cúcuta’s economy, the connection to Venezuela has always been crucial. Venezuelans traveled here to enjoy the variety of local and imported goods when the country was more prosperous. But the crisis changed everything: Now, more Venezuelans choose to stay. According to Colombian migration data from March, about 176,000 Venezuelans reside in the Norte de Santander region, of which Cúcuta is the capital. And those who come and go do so out of necessity: Last year, about 35,000 people crossed into the city per day to buy basic necessities or seek medical care, then went back home.

In late February, the government of Venezuelan President Nicolás Maduro shut down the three bridges that connect Cúcuta and Venezuela after U.S.-backed aid convoys tried to use them to enter Venezuela. Since then, illegal crossings through the area’s lush thickets, trails referred to as trochas, have become a lifeline both for those in need of goods and for those like Hernandez, who can make a little cash ferrying things over the border. You wouldn’t make that dangerous trip if you didn’t need to: Criminal groups lie in wait to steal what they can.

For his part, Hernandez makes two to three rounds a day, each lasting an hour or more, and he charges his customers 5,000 to 7,000 Colombian pesos (about $1.50 to $2.15) per trip. Sometimes, he barely earns enough to pay the daily rent, and the family needs to make a choice: fall behind or skip meals. They may soon find themselves going hungry even more often. As more people flee Venezuela, Hernandez faces more competition. “Those who worked on the other side, in Venezuela, they came to work on this side, so now we are many more,” he explained. “To get a trip, to work, it’s a grind.” 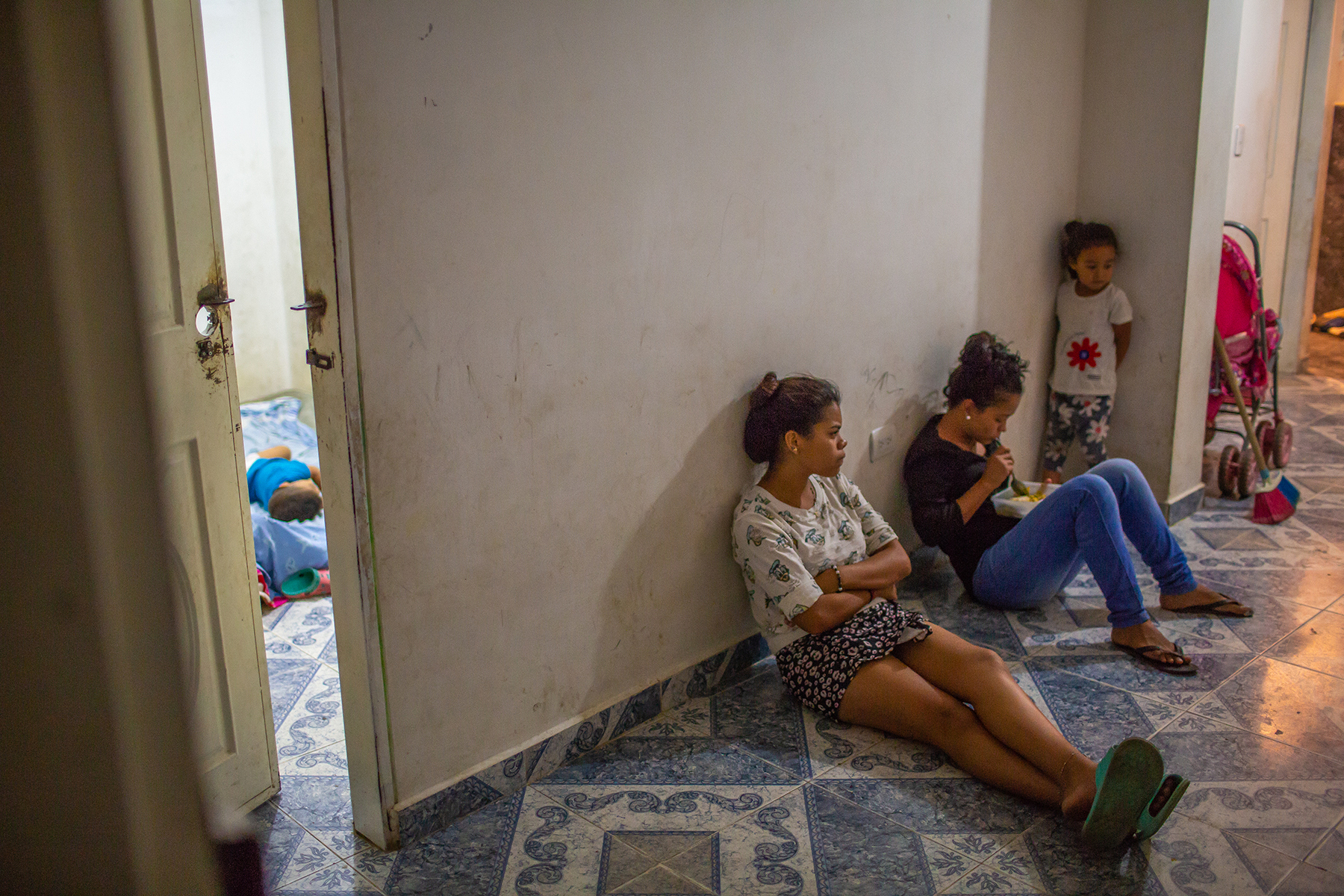 Betania Sanchez, wearing black and seen on March 18, arrived in February from Venezuela to Cúcuta, where she lives in an apartment with her daughter and 11 other Venezuelans. She now sells coffee and snacks near the border, making an average of 20,000 to 30,000 pesos ($6 to $9) on a good day.

Sanchez’s sister, Betania Sanchez, arrived in Cúcuta in February. Back in Venezuela, she used to have a cleaning job, which earned her about $3.35 per month. It wasn’t enough to afford food and other basic needs. Betania now sells coffee and snacks near the border, and she makes an average of $6 to $9 on a good day. She tries to send money back home and chips in when her sister and brother-in-law need cash. She works long hours but is thankful that at least she’s getting by. “They think that we’re living here like a millionaire, and that’s actually what I thought [when I was in Venezuela],” she said. There are no millionaires to be found, of course, “but at least here … your effort bears fruit.”

The economic activity is also good for Cúcuta, which has seen an increase in commerce in recent years. Francisco Unda, the manager of the National Business Association’s regional branch there, explains that although migrants participate in the informal economy and send money back home, small businesses on the Colombian side of the border also profit as thousands of Venezuelans come to buy goods there. “The economic and social situation in Venezuela creates a new market, and it’s the market of essential needs,” Unda said.

In the past, when Venezuelans had a stronger currency, they purchased more expensive goods such as electronics or high-quality clothing items. Some of these were produced in Colombia, and others were imported. But the crisis drastically altered what goods are being traded—and who is benefiting. “Right now it is no longer the case,” he said. “They buy toilet paper, medicines, diapers, milk. … This is very good for small businesses on the Colombian border.” 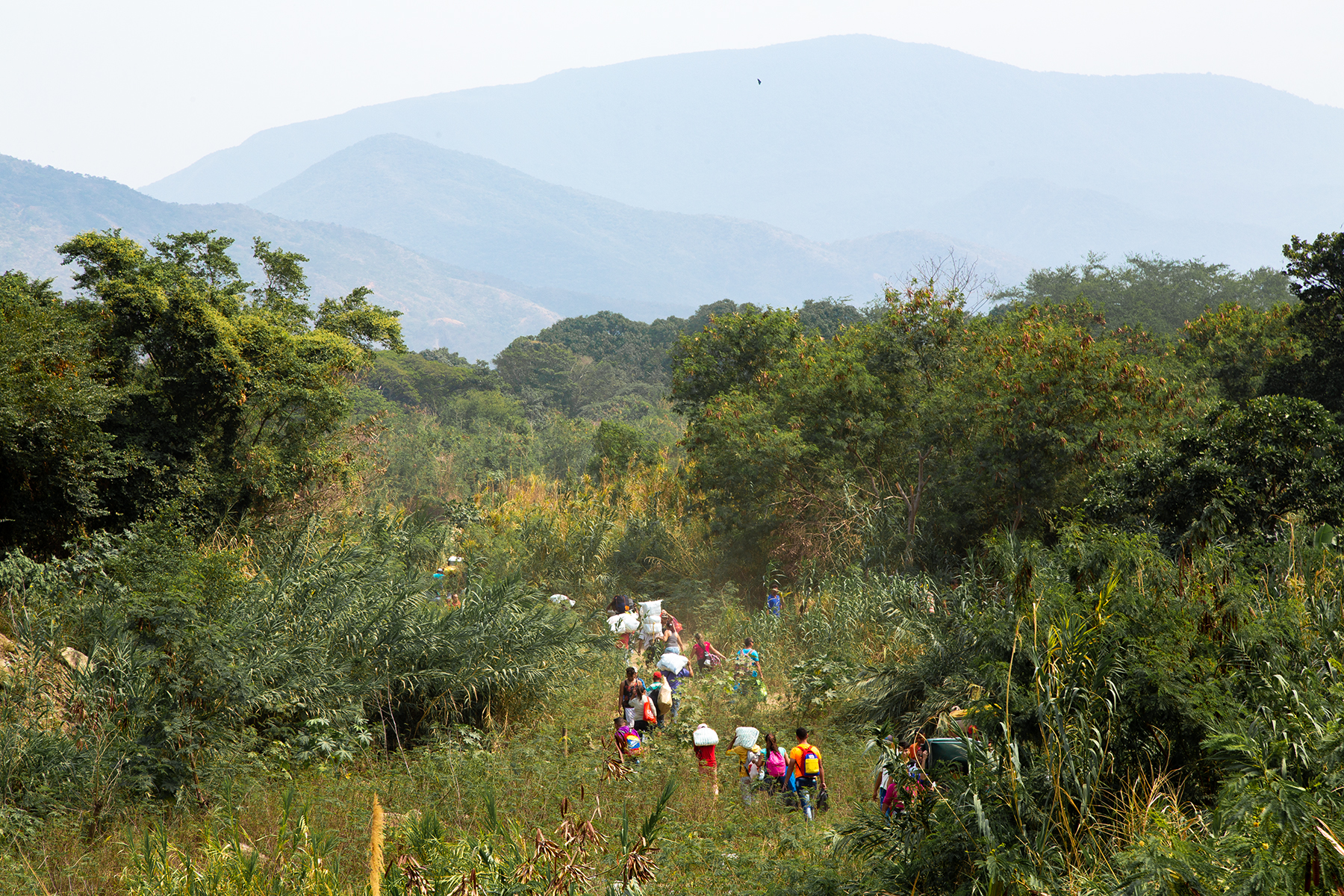 Venezuelans cross the border through the jungle carrying supplies, food, and medicine purchased in Cúcuta on March 18.

To be sure, although increased economic activity might be beneficial for both the migrants and the locals in the near term, it could have less positive consequences in the long run. Cúcuta has one of the highest unemployment rates in the country—about 16 percent—and Venezuelans are willing to accept lower wages. Although Colombians have so far been largely receptive to their new neighbors, that could change. Estefania Colmenares, the editor in chief of the local La Opinión newspaper, explained that a lot of migrants work “in exchange for a plate of food, accommodations, or the possibility of bathing daily, instead of a salary.” And that, she said, is “shaping an odd labor market” in Cúcuta. Local and international organizations have already begun collaborating to create job opportunities for migrants and locals in the border areas, and the United Nations Development Programme is backing some of these initiatives.

So far, Sanchez and her family are coping well enough with their new reality. But their future in Cúcuta is uncertain. “I don’t want go back to Venezuela,” she said. “Every time I call home, [they] tell me that everything is getting worse.” As she talks, the silhouettes of the hills across the border in Venezuela darken as the night falls.

Afsin Yurdakul is a journalist, news anchor, and fellow with the Nieman Foundation.