Lukashenko Is ‘Selling Belarus, Piece by Piece, to Russia’

By Amy Mackinnon, a national security and intelligence reporter at Foreign Policy.
May 10, 2019, 5:59 PM

Last week, Russian President Vladimir Putin dismissed his ambassador to Belarus after months of tension. Mikhail Babich, a former KGB officer, had made a number of controversial comments that provoked the ire of Belarusian President Alexander Lukashenko. The Belarusian Foreign Ministry accused the diplomat of treating Belarus as a district of Russia as opposed to an independent state.

Widely seen as Putin’s enforcer, Babich’s appointment last year was interpreted as an ominous sign for Belarus. With Putin due to hit his term limit in 2024, speculation has begun to mount that neighboring Belarus could prove pivotal to his future plans. Beginning in December, Russian leaders have shown a sudden interest in a previous overlooked treaty, signed by the two countries in 1999, that would create a union state with a single, shared leader. The agreement could pave the way for Putin to remain in charge of the tandem state, without riding roughshod over the Russian Constitution. 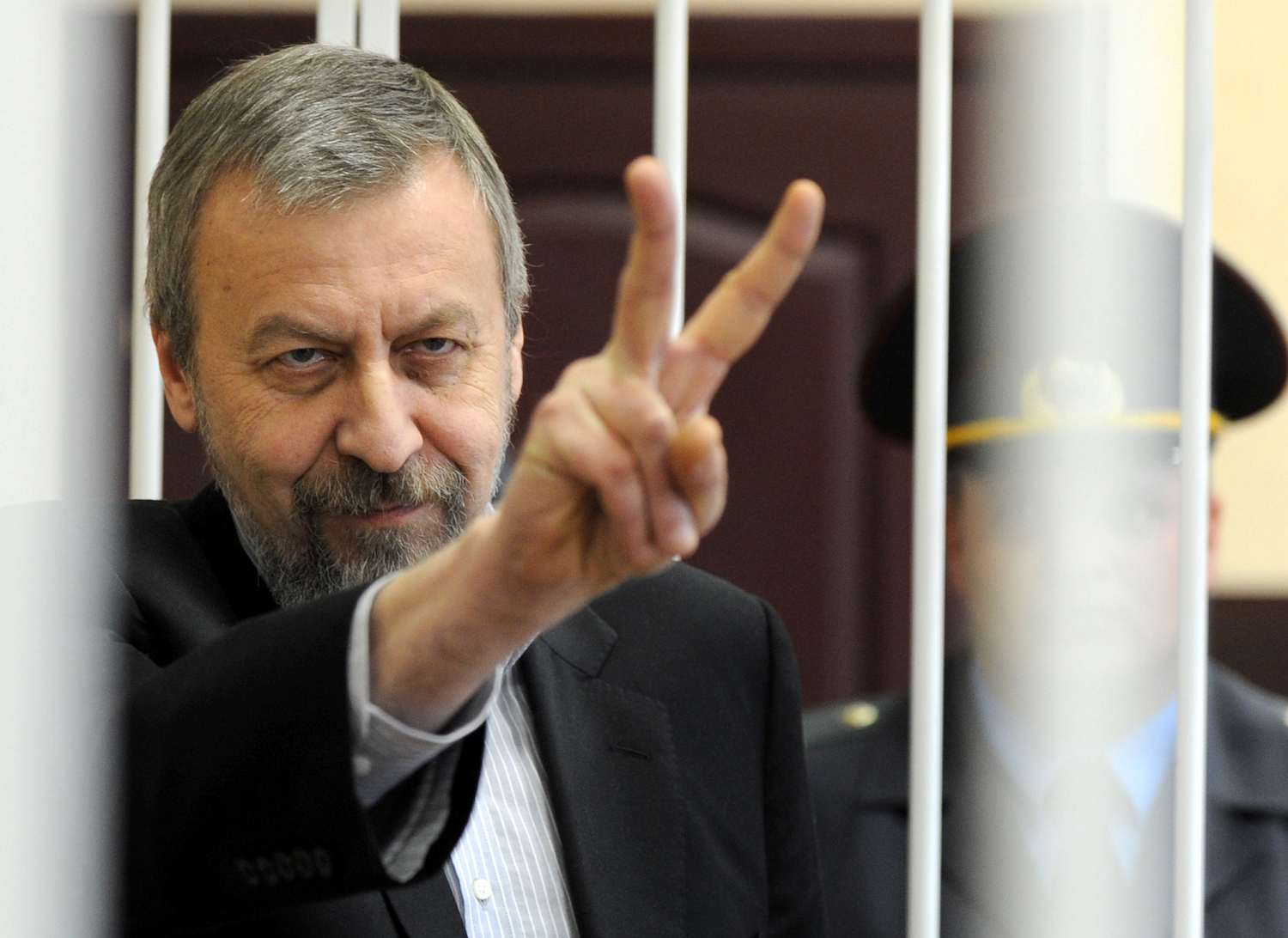 Picture taken on May 11, 2011, shows the Belarusian opposition leader Andrei Sannikov flashing the V sign for victory in the defendant’s cage during his trial. (Viktor Drachev/AFP/Getty Images)

Foreign Policy sat down with Andrei Sannikov, the chairman of the European Belarus civic group. He ran against Lukashenko in elections in 2010 and later spent 16 months in prison on charges widely believed to be politically motivated. He lives in exile in Warsaw, Poland.

Foreign Policy: Do you think Lukashenko would ever agree to join a union state, if it would mean him losing ultimate control?

Andrei Sannikov: He might, because it is his creation. If not for Lukashenko, there would be no such relationship with Russia, and there would be no agreements on paper. You probably remember why this agreement was signed. Because at that time Lukashenko himself still had plans to become president of the union state.

Lukashenko started his rule by destroying Belarusian identity and continues it. By taking away the language, culture, and history, he is already selling Belarus, piece by piece, to Russia. He might see at some moment that there is no way out for him. Then he will try to reach an agreement with Putin. But independence of Belarus will never be something that he will fight for. It’s nonexistent for him. His regime, yes. His personal power, yes, but not the country.

FP: What do you think the West needs to do with Belarus and with Lukashenko?

AS: The West should understand how important Belarus is for the security. Not for human rights, not for democracy, but for security. For hard security. The West should simply recognize that a lot is at stake in the region. You cannot use Lukashenko as a lesser evil against Putin because evil is evil. You have to deal with evil by supporting your own principles, by supporting your own values, and by helping Ukraine—because without Belarus, Ukraine is always vulnerable.

FP: Do you think Lukashenko is nervous?

AS: Yes. Because there was some unprecedented criticism of Babich coming from the Belarusian Foreign Ministry. It was done with the consent of—even on the instructions of—Lukashenko.

FP: I saw that Babich has been recalled.

AS: Maybe Putin doesn’t want this tension to be public. I don’t think it changes Putin’s plans because he definitely has some plans for Belarus.

FP: Do you think that they don’t want it to be public yet because it’s still quite a long time from 2024 and by that time maybe they’ll come up with a better way to solve Putin’s succession problem?

AS: Maybe, because he has several options now in Belarus and they’re all not theoretical options—they’re all tested, starting from Georgia. From the annexation of Georgian lands, then Ukraine, Crimea. The Ukrainians are worried very much that Russia is again preparing yet another offensive.

FP: How was Babich viewed when he was appointed last year? I understand he was seen as one of Putin’s enforcers.

AS: Yes, definitely. He has a history of being rejected. I think he started his career with Akhmad Kadyrov [former ruler of Chechnya], and Kadyrov was not happy with him, and he was asking Putin also to replace him. I think Putin wanted him to be ambassador to Ukraine, but the Ukrainians rejected him, and then he came to Belarus.

I think that it’s not a coincidence that some major developments have coincided. Removal of Babisch, arrest of the high-level officials [the former head of Lukashenko’s security team was arrested at the end of April], contamination of the pipeline that is exporting oil to Poland and Ukraine and Europe. Something is cooking. I think we have to observe quite closely what is going on. Dmitry Mezentsev [the new Russian ambassador to Belarus] is a specialist in information technologies. When you hear that someone in Russia is a specialist in information, you know that he is a specialist in disinformation and propaganda. So I think these two ambassadors are two elements of the same plan.

FP: How does Russian disinformation work in Belarus?

AS: Russian media dominates the information space in Belarus. Since Lukashenko’s propaganda, Lukashenko’s TV, is of inferior quality, people prefer to watch Russian TV. That is why more than 60 percent of Belarusians support the annexation of Crimea, so it’s easy for Russia in Belarus. Billions of dollars go into the spreading of disinformation, and Belarus is most vulnerable to this Russian disinformation. The danger there is that Lukashenko is hated and Putin is supported and the West is invisible, so Belarusians have no choice. The opposition doesn’t have access to any meaningful and effective media.

FP: How is Lukashenko viewed in Belarus?

AS: He is hated in Belarus. Putin is more popular than Lukashenko in Belarus. That is also dangerous because if they decide to organize some kind of referendum comparing these two rulers, or dictators, Putin would win. Lukashenko is hated because it is clear that the system in Belarus is Lukashenko. In Russia, it’s a bit more complicated. In Russia, there is still, I think, people who approve of the system that Putin is creating. But in Belarus, it is different. It is fear together with laughter—people laugh at Lukashenko, and then sometimes they fear that their attitude will become known to him.

FP: Do you see a time when you might run for president again?

AS: If we have an election.

AS: Yes, that’s what the West should help us to achieve: free and fair elections. Everywhere change has occurred in the region, it’s because the institutions of election were preserved—Armenia, Ukraine. In Russia and Belarus, [elections] have been destroyed. The ideal strategy of the West should be to really help us organize free and fair elections.

FP: Do you get any support from Western institutions for your work?

AS: No. It was withdrawn for two major reasons. First of all, Ukraine happened, and the attention, together with resources, was diverted, which is logical but not very comprehensive, because you have to try to solve the problem of the region and not just react to something that is happening. Second, Europe changed its attitude after lifting sanctions [on Belarus and Lukashenko]. Ignoring human rights violations, it prefers to work with Lukashenko and with some fake GONGOs and fake politicians. It’s not about myself. It’s about those elements that I told you about—political opposition, independent press, independent trade unions, human rights defenders, and civil society. They don’t have assistance.

Shhh! Belarus Wants You to Think It’s Turning Over a New Leaf

Minsk’s muddled media clampdown could jeopardize warming of relations with the West.

The Belarusian President Won’t Go Down Without a Fight

Tensions between Moscow and Minsk have sparked worries over another Russian annexation.

Is Russia Practicing a Dry Run for an Invasion of Belarus?

With tensions worsening between the two countries, Russia’s massive military exercise is firing a couple thousand warning shots at a reluctant ally.