‘Everything Is Calm, and People Are Happy’

So says Iraq’s new electricity minister a year after blackouts sparked violent riots across the country.

Since the 2003 U.S. invasion of Iraq, reliable power supplies—or the lack thereof—have played an outsize role in the country’s stability. During hot summer months, demand for electricity outstrips available supplies, leading to rationing and blackouts. Last summer, blackouts sparked violent protests in southern Iraq that soon spread across much of the country—and cost the old electricity minister his job. Foreign Policy spoke with the new minister, Luay al-Khatteeb, about fears of another burning summer, the country’s ambitious plans to rebuild the shattered power sector, and U.S. pressure over continued energy ties with Iran.

Foreign Policy: Everybody I talk to says you have the toughest job in Iraq, trying to keep the lights on and air conditioning running, without enough power to really do so. Do you see it that way?

Luay al-Khatteeb: This is what they say, but I’m just doing my best. I’ve been working since I assumed this job [last October] and reviewing all the processes and plans to turn things around from past practices. So far, we’ve been doing well, and I’m glad to say that we are now producing 3 gigawatts more of electricity than last year at the same date.

FP: The problem for Iraq is that in the summer, power demand outstrips supply, and we saw what happened last year with blackouts leading to protests in Basra and then spreading. Are you worried about seeing a repeat this summer?

LK: Each year has its own challenges. Last year we had the water problem, and the electricity problem, and job issues, and political challenges—it was a plethora of things that contributed to the dynamic last year. This year, people need to have more faith and trust that a lot of work has been done to avert any type of repeat episode. Luckily, the weather is on our side, the water position is significantly better compared to last year, hydropower is contributing three times more than last year. The plan we put in place for 2019 also added extra capacity and provides 22 to 25 percent more power capacity compared to last year.

And we managed to rehabilitate transmission lines that had really compromised power supply to liberated territories. We delivered electricity to a border town with Syria and the western part of Anbar, and this after years of really zero supply of electricity. Ten days ago, we managed to restart the power station in Mosul that was completely stopped because of Daesh [the Islamic State] five years ago. All the technical teams that I put in place really contributed, and we are reaping the fruits of that effort. 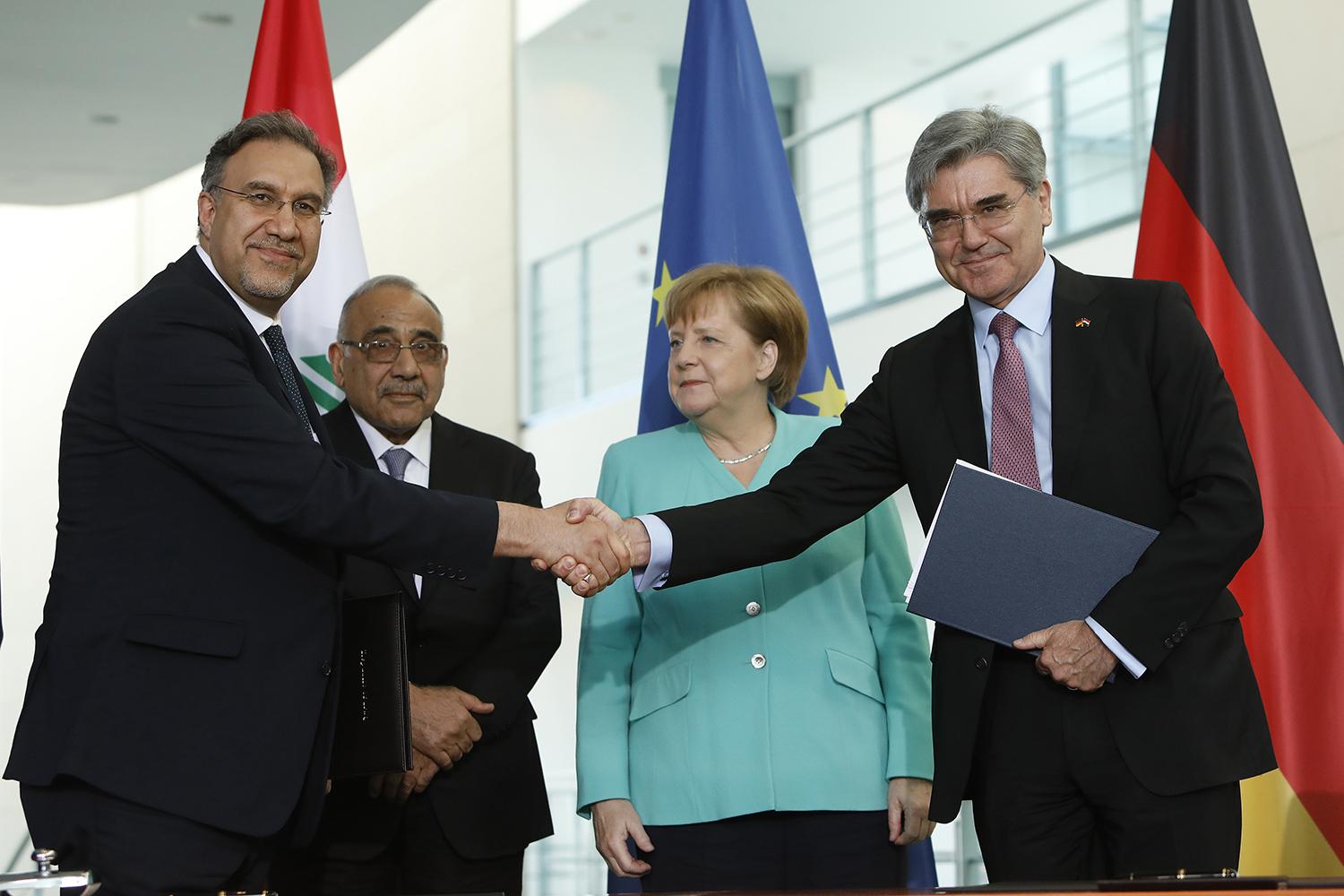 FP: So you don’t foresee a repeat of last year’s disturbances?

LK: Technically speaking, no. I don’t see this happening. Unless some sort of force beyond our capabilities would put an end to what we are doing.

FP: What kind of damage remains to be fixed after the years of heavy fighting?

LK: There is still a lot of work to be done. At the moment, we are providing almost 20 hours of power a day to every province except Anbar, which has 15. But that’s 15 hours compared to 11 hours a day last year. Of course, there are some districts where the transmission lines were completely destroyed; these areas need major projects, and these transmission lines require time and budgets which may not be available this year. That’s why we are signing mega-projects with various multinational companies, to basically provide a radical solution to this endemic. We developed our own Iraqi road map by taking the best solutions from various multinationals.

FP: Speaking of that road map, you were in Berlin last week, signing with Siemens the first of what could be contracts worth $14 billion or more. Is Siemens, rather than, say, General Electric, in the driver’s seat?

LK: There is room for everybody. To rebuild the Iraqi power sector, we need more than 14 or 15 billion euros that have been mentioned. The road map is to be implemented, item by item, over four years. In a nutshell, it will add 11 gigawatts of electricity and develop a more reliable transmission system for the country. It’s not just power generation.

We need at least 100 substations across the country and interconnections with neighboring countries. This is something we signed with Saudi Arabia, Kuwait, Jordan, with Iran, soon with Turkey and Syria, it’s basically to make Iraq an electricity hub. This interconnectivity is not necessarily to import electricity to meet local demand. Iraq is a resource-rich country, and we have enough resources to meet our local demand and achieve energy independence at some point not too long from now.

FP: U.S. Secretary of State Mike Pompeo was in Iraq this week, talking up U.S. support for Iraq’s energy independence. Right now, Iraq is still quite dependent on Iran for power—

LK: I am not in a position to speak about legacy practices. I am starting a new plan.

At the moment, about 4 gigawatts [roughly one-third of Iraqi electricity] comes directly and indirectly from Iran, either by providing the electricity directly or through natural gas supplies that provide the feedstock for power generation. This is something that in terms of price and volumes and delivery—there is no alternative. We have explored other options in neighboring countries. There is no alternative that competes on volume or price or speed of delivery to make up for that.

With regards to the import of gas or electricity, this is not going to be an issue in about four years’ time. We are developing our gas network, and we will have enough feedstock to fire our power plants. We will have enough capacity by then not to rely on imports from others. Our interconnections with neighboring countries will be to turn the region into a vibrant utility market, not to meet local demand. This is the objective, provided our plan works. But time matters. We are not talking days, or weeks, or months. We need three to four years, and we made that very clear. Any expert will say the same.

FP: Given increased U.S. desire to choke Iran’s economy, and a reluctance to let you keep importing power and gas from Iran, is there any concern you’ll get caught in the showdown between Washington and Tehran?

But at the same time, we also have strategic relations with all our six neighbors. We have shared history and culture and politics and interests. And this must not be compromised at the expense of one relationship.

FP: Do you feel there’s a quid pro quo there—you’ll get waivers from Washington if U.S. companies get contracts—say, Exxon or GE?

LK: Any embassy would like to promote the business conglomerates of their country. I don’t read this as pressure. I see this as promoting their businesses. GE enjoys good relations with the Ministry of Electricity; 50 percent of our power generation capability is based on GE technology. So we will keep dealing with GE one way or the other. Just this year, we signed $1.5 billion worth of deals with GE.

When it comes to the road map, it needs to be an Iraqi road map, and we need to standardize our system using high-end technologies. Our fleet is already diverse: We have German technology, U.S. technology, Swedish, Chinese. We just need to make it more viable and sustainable for the future.

FP: Well, that’s what has a lot of experts worried. The International Energy Agency in big new report estimates that growing population and power demand will likely outstrip whatever you manage to build in terms of new power plants. Or do you think your four-year plan can close that gap? Maybe using more renewable energy? Sunshine isn’t lacking…

LK: Ten days ago, we launched our first renewable energy initiative, inviting multinationals to develop solar farms. We aim to build 755 megawatts this year, and year on year we will be adding 500 megawatts or more. We are diversifying our energy portfolio.

These forecasts, they are just forecasts. Speculation six months ago suggested that there will be an Armageddon this summer and Iraq will fail to deliver electricity, and it will be the end of Iraq. Today, almost all provinces enjoy 20 hours of electricity or more, and we are producing 3 gigawatts more than last year’s levels. Everything is calm, and people are happy.

Some diplomats and experts worry the nuclear deal is on the verge of unraveling.

Echoes of Iraq in Trump’s Confrontation with Iran

The rising tensions with Tehran bear disturbing similarities to the run-up to war in 2003. Chief among them: the presence of John Bolton.

How Dangerous Are U.S.-Iran Tensions?

Washington cites Tehran’s “warnings” in deploying a carrier strike group to the Persian Gulf. The question is whether the threat is real.

How To Tell What’s Really Happening With the Wuhan Virus

As America Shuts Its Doors, Afghan Refugees Are Stuck in Turkey