Iran responds to U.S. military presence in the Gulf, China and the United States reach a deadlock in the trade war, and what to watch in the world this week.

Hello and welcome to Foreign Policy’s Morning Brief. If you’ve received our newsletters in the past, you might notice that things look a little different. We’ve given everything a fresh design and changed the format. As FP’s newsletter editor, from now on I will be delivering the Morning Brief with forward-looking analysis and the news you need to start your day. We welcome your feedback. Please let us know what you think at morningbrief@foreignpolicy.com. Sign up to receive this in your inbox every weekday morning here.

A senior commander in Iran’s Islamic Revolutionary Guard Corps said Sunday that the increased U.S. military presence in the Gulf is not a threat but a target. “An aircraft carrier that has at least 40 to 50 planes on it and 6,000 forces gathered within it was a serious threat for us in the past but now … the threats have switched to opportunities,” said Amirali Hajizadeh, the head of the Revolutionary Guards’ aerospace division. “If [the Americans] make a move we will hit them in the head.” The United States sent an aircraft carrier and B-52 bombers to the region last week, with the USS Abraham Lincoln passing through the Suez Canal.

The rhetoric comes as Iranian President Hassan Rouhani has called for unity in the face of tightened U.S. sanctions. Since Rouhani threatened to resume Iran’s nuclear program, U.S. President Donald Trump has not ruled out military confrontation, but he has urged Iran’s leaders to negotiate with him. Iran appears to be playing it slow, Ilan Goldenberg and Elizabeth Rosenberg argue for FP, noting that a diplomatic solution could still be on the horizon.

What about the nuclear deal? European leaders appear determined to save the 2015 nuclear deal with Iran, from which the United States backed out. Doing so could depend on restoring Iran’s ability to export oil—sure to create tension with the Trump administration, argues Riccardo Alcaro at Politico Europe. But if the deal collapses, it could mean the end of multilateral diplomacy: “The stakes for Europe are sky high,” he writes.

What’s next? Iran is feeling the pressure. Rouhani compared the effects of the U.S. sanctions, including those on oil sales, to the problems faced by Iran after the Iraqi invasion in 1980. Among oil producers, Saudi Arabia appears set to benefit most from the sanctions, Bloomberg notes. The country could increase output without breaching OPEC targets and sell at a high price to buyers like China, South Korea, and India.

What to watch. Israel has stood back from the increasing tensions between Iran and the United States. But the Israeli energy minister cautioned on Sunday that if the standoff escalates, there could be an Iranian proxy attack or direct strike on Israel. Israel has faced Iranian proxy forces in Syria and Lebanon but the two countries have not fought an open war.

Trade deadlock. China and the United States seem to have reached an impasse in trade negotiations. China has balked at changing its laws to limit government subsidies on everything from computer chips to commercial aircraft. After hiking tariffs for $200 billion worth of Chinese imports, U.S. President Donald Trump has asked the U.S. trade representative, Robert Lighthizer, to begin raising tariffs on all Chinese goods.

Trump and Chinese President Xi Jinping will probably meet at a G20 summit in June. They were expected to sign a trade deal, but that seems less likely now that China has made significant revisions to a draft agreement. Trump says the United States is “right where we want to be with China.”

U.N. monitors retreat in Yemen. Houthi forces have begun withdrawing from key ports in Yemen in what officials say marks the beginning of a peace deal in the country’s four-year war. While some in the internationally recognized government dismissed the retreat as a “show,” the United Nations said Sunday that the first steps have gone according to plan.

Brexit plagues Conservatives in European elections. Britain’s Conservative Party is polling in fourth place in advance of European Parliament elections on May 23—a vote that would not be happening if Britain had managed to exit the European Union on time. A new pro-Brexit party, led by Nigel Farage, is in the lead. Meanwhile in the British Parliament, Brexit talks remain in political limbo as disgruntled Tories debate who should replace Prime Minister Theresa May and when she should step down. Britain voted to leave the European Union nearly three years ago.

Midway through President Rodrigo Duterte’s six-year term in the Philippines, he could get a big boost. Half of the seats in the country’s Senate—largely seen as independent from the president’s influence—are up for a vote today, and polls predict a shift in his favor.

Today, U.S. President Donald Trump will meet Hungarian Prime Minister Viktor Orban at the White House. The meeting worries some congressional leaders, who say that democracy in Hungary has declined under Orban. The Trump administration should push Orban to walk back Hungary’s close ties with Russia and China, Melissa Hooper and Gregory Feifer argue for FP.

On Tuesday, U.S. Secretary of State Mike Pompeo will make his first trip to Russia to meet with Russian President Vladimir Putin and Foreign Minister Sergei Lavrov. Pompeo is expected to raise concerns about Moscow’s policies in Venezuela and Syria and Russian meddling in U.S. elections.

Australians head to the polls in a general election on Saturday. The Labor party narrowly leads the polls, meaning that the country could have its seventh change of prime minister in 12 years.

A church attack in Burkina Faso. Gunmen killed six people outside a Catholic church on Sunday in Burkina Faso. It was the second attack on Christians in as many weeks in the country, which has experienced a sharp rise in terrorist attacks in 2019 as Islamist groups based in neighboring Mali seek to extend their reach.

The next president of Lithuania. Lithuanians voted in the first round of the presidential election Sunday, with Ingrida Simonyte and Gitanas Nauseda heading to a runoff on May 26. The winner will succeed outgoing President Dalia Grybauskaite, one of the European Union’s toughest critics of Russia.

Activism in Cuba. Without a permit from the government, LGBT activists held a pride parade this weekend—an unprecedented show of free expression in the one-party state. The march marks the second rare event organized independent of the state in just over a month in Cuba.

A pilot for Myanmar National Airlines managed to safely land a passenger plane without its front wheels in Mandalay on Sunday. It was the second aviation incident in Myanmar in a week.

As authorities in London crack down on diesel vehicles, there could be fewer ice cream trucks on the streets. Ice cream truck drivers say that demand for soft serve is contributing to the city’s serious air pollution problem. 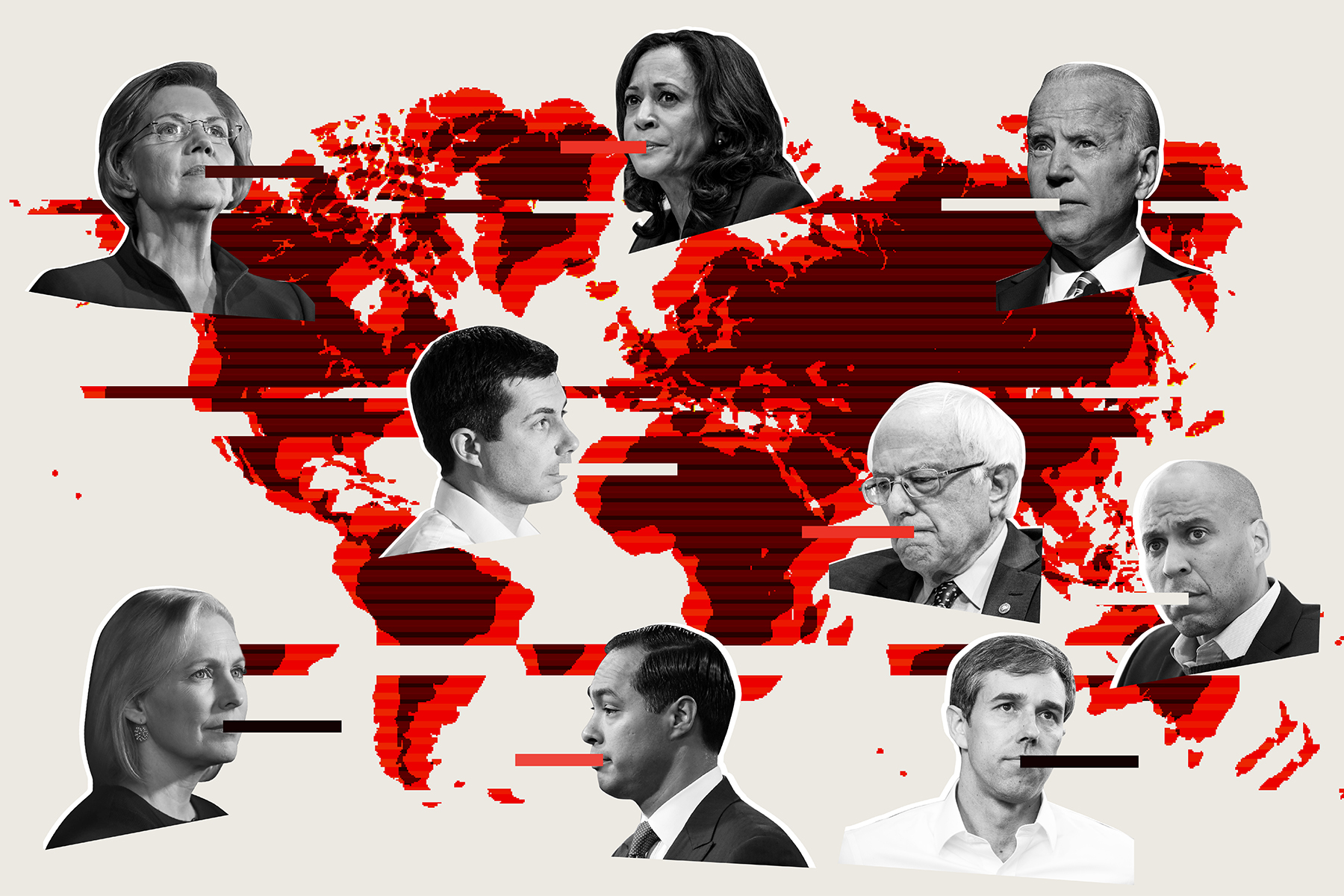 Among the large number of candidates for the 2020 Democratic primary, there has been notably little discussion of U.S. foreign policy so far. This shouldn’t come as a surprise: Few of those running have much international experience. But ignoring the subject is a big problem, writes Jonathan Tepperman, FP’s editor in chief.

This is a particularly fraught moment for the United States in the world, and many of the threats it faces were caused by Washington itself. For Americans, this offers some hope: “While the United States has made a number of big mistakes in recent years, the good news is that, what Washington did, it can also undo,” he writes.

In Xinjiang, China has built a mass surveillance state to monitor every movement of the region’s Uighur Muslims. The crisis reporting site Coda Story effectively uses video, original artwork, and detailed interviews to tell the stories of the exiled Uighur women who are fighting back. From a neighborhood in Istanbul, the women have turned to technology to take on the Chinese state. Amy Mackinnon, staff writer