The Age of Nostalgia

The world is marching backward into the future. Millions of people, particularly in advanced economies, believe that life was better 50 years ago: Job opportunities abounded, local communities were intact, and the pace of technological change was manageable. In today’s epidemic of nostalgia, yesterday is associated with progress; tomorrow with stasis or regression.

In 2016, the Public Religion Research Institute revealed that 51 percent of the U.S. population felt that the American way of life and culture had changed for the worse since the 1950s. Similarly, in 2012, 43 percent of the British population thought that Great Britain had become worse since Queen Elizabeth II’s accession 60 years earlier. Only 30 percent argued the opposite.

Similar perceptions are widespread across continental Europe. Although Italy might be the most nostalgic country within the European Union, as of 2014 a sizeable minority East Germans would have preferred for the Berlin Wall to still be up. And even in Russia it is rather common to hear yearning for the old Soviet days, when the centrally planned economy supposedly provided steady employment, adequate wages, and access to broad social services. 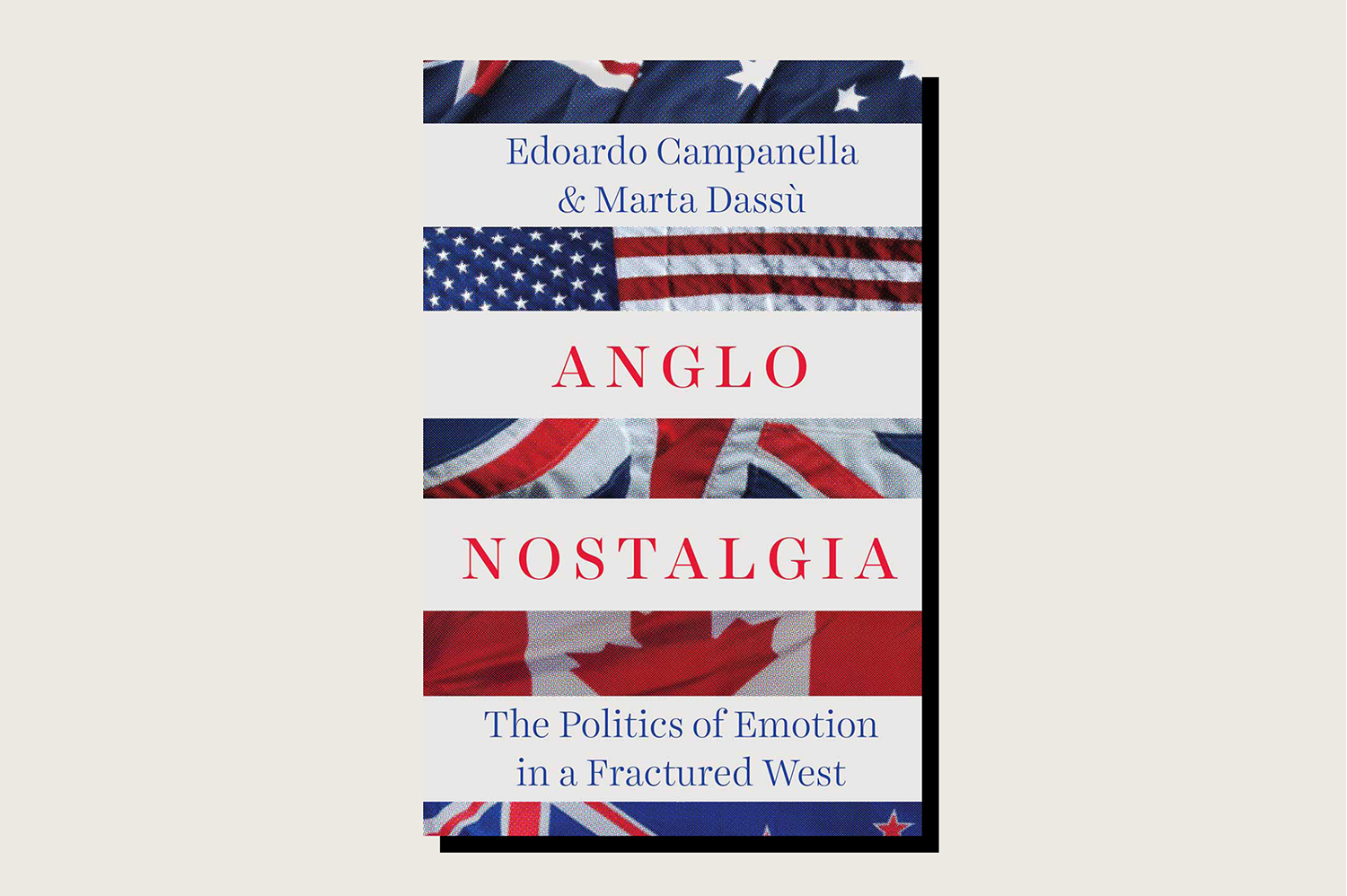 Anglo Nostalgia: The Politics of Emotion in a Fractured West, Edoardo Campanella and Marta Dassù , Oxford University Press, 234 pp., $32.95, May 2019

Far from innocuous, the infatuation with a mythicized past is shaping politics in risky ways. Nostalgia induces citizens to find comfort in a time when the world was less flat and governments (apparently) had the power to protect their citizens from external threats. Jingoistic leaders, from Donald Trump in the United States to Recep Tayyip Erdogan in Turkey to Vladimir Putin in Russia to the Brexiteers in the United Kingdom are nourishing these longings with fear, anger, and resentment. In many ways, nostalgic nationalism is the political malaise of our time.

With the world on the cusp of massive geopolitical, demographic, and technological transformations, there is no shortage of reasons to be nostalgic. The denouement of U.S. liberal hegemony has created opportunities for rival powers such as China, Russia, and Turkey to reassert their lost status on the world stage, while the “America First” strategy aims to return the United States to its bygone role of undisputed global hegemon.

At the same time, the threats to employment posed by globalization and dizzying technological change induce workers, particularly in the West, to long for the economic security and the social mobility enjoyed by their parents. In the United States, over the last few decades, children’s chances of outearning their parents have fallen from about 90 percent to 50 percent. Europeans, meanwhile, dream of the economic stability enjoyed by their parents thanks to advanced welfare state programs.

The aging of the population in Europe, North America, and parts of Asia psychologically compounds all these factors. In middle and late adulthood, people tend to remember their youth better than any other period of their lives—years that contributed to shaping their identities and are usually associated with happy moments and youthful thoughtfulness. It is not surprising that, at the time of the Brexit vote, 59 percent of pensioners wanted to leave the European Union as opposed to 19 percent of those aged 18 to 24. Equally, almost nine out of 10 Russians over the age of 60 have a strong sense of loss for the Soviet Union, while only 27 percent of those between ages 18 and 24 feel the same way.

Despite its Romantic flavor, nostalgia is actually a malaise—and should be treated as such. The word comes from medicine. In 1688, the Swiss physician Johannes Hofer coined the term by merging the Greek word nostos (homecoming) with algos (pain) to describe a form of medical condition characterized by a desire to return to one’s homeland. Hofer identified this disease by observing Swiss mercenaries who, after long, arduous, and often miserable military campaigns abroad, were susceptible to nostalgia triggered by listening to a particular Swiss milking song, “Khue-Reyen.”

From a purely psychological point of view, nostalgia represents a coping strategy for dealing with moments of deep uncertainty and radical discontinuity. It removes its victims from an unpleasant present and throws them into a familiar past, reinforcing their self-esteem and the self-confidence, which are needed to navigate periods of sustained stress. But nostalgia is usually accompanied by amnesia. It depicts the past in such an idealized way that some details, often not irrelevant, are lost.

Human beings tend to view historical evidence through a filter that selects the rosier part of the process, ignoring what does not fit their preconceptions. Every single bit of information that corroborates positive feelings is savored, while the rest is tossed out, what behavioral economists call a “confirmation bias.” Compounding this behavior, negative emotions associated with our memories tend to dissipate more quickly than the positive ones. This is what psychologists call the “fading affect bias.”

And so many older Americans recall the joyful lives of their parents in the booming 1950s, consciously ignoring the fact that they now live longer, more opulently, and in safer cities. Many Russians overlook the fact that for four decades during the Cold War, they faced imminent nuclear destruction and standards of living that were much lower than those enjoyed in the West. The Eastern Germans regretting the Berlin Wall ignore what it meant to live in the days of the Stasi.

Collective nostalgia is an emotional weapon, capable of mobilizing a nation toward a common goal. Although that goal is often tinged with anger today, it is not necessarily a source of gloom and doom. Svetlana Boym, who was a professor at Harvard University, made a distinction between two types of homesickness. Reflective nostalgia is the benign form of the malaise. It looks at the past through critical eyes and recognizes that something might have been lost, but that much has been gained along the way. Restorative nostalgia, instead, proposes to rebuild what was lost as it was.

The problem is that the world is now primarily dealing with a toxic restorative nostalgia. Trump was elected president of the United States with a clear mandate to preserve and restore Washington’s primacy and “Make America Great Again.” Erdogan harbors neo-Ottoman ambitions, while Japanese Prime Minister Shinzo Abe’s political lodestar is the 19th-century Meiji Restoration, which laid the foundations for an expansive Empire of Japan. Hungarian Prime Minister Viktor Orban still regrets the Kingdom of Hungary’s territorial losses after World War I, and Putin has described the collapse of the Soviet Union as “the greatest geopolitical catastrophe” of the 20th century.

But it is Brexit that epitomizes our new age of nostalgic nationalism in its purest form. It captures the economic pain of the left-behind, the social disruptions generated by immigration, and the geopolitical ambitions of a once glorious empire. The three stages of nostalgic narrative—described by sociologists as the “golden days,” the “great rupture,” and the “present discontent”—are clear. The golden age is represented by the imperial era during which the United Kingdom held sway over “one continent, a hundred peninsulas, five hundred promontories, a thousand lakes, two thousand rivers, ten thousand islands,” as the newspaper St James’s Gazette wrote at the beginning of the past century.

The rupture came not only with the slow demise of the British Empire but also with London’s decision to join the European project in 1973. The present discontent is caused by the unwillingness of many Britons to come to terms with their country’s transformation into an ordinary nation.

Brexit was supposed to close this nostalgic cycle by bringing London back to its golden era—not just to immediately before the infamous decision to join the European Economic Community, but possibly to a more distant glorious past. No other country has yet made a comparable leap backward. As Vince Cable of the British Liberal Democrats puts it, “Too many were driven by nostalgia for a world where passports were blue, faces were white, and the map was colored imperial pink.”

Ending today’s epidemic of nostalgia will not be easy. It has penetrated the sociopolitical fabric of several nations, and structural forces such as aging populations, the cracking of the global liberal order, and technological disruptions reinforce attitudes of longing. Although these factors are structural in nature, the Great Recession and the identity crisis generated by new waves of migration created fertile ground for pessimism and disillusionment to spread. That, in turn, made restorative nostalgia the prevalent form of longing. And populist politicians took advantage of such negative emotions to their ends, fueling instead of starving them.

When the nostalgia malaise was first studied in the 17th century, it was regarded as a disease that could be cured with leeches, warm hypnotic emulsions, opium, and purging. If the conventional remedies of the time failed to produce a good result, a patient’s symptoms could usually be alleviated by a physical return to the beloved motherland.

Yet, at a time when experts and the media are so distrusted, countering the restorative nostalgia of nationalist and jingoistic leaders is not so straightforward. The resurgence of nostalgic politics and the nation-state as the locus of identity and sovereignty points to an important trend: renationalization that might end up triggering the disintegration of the West. Unless nationalist and protectionist pressures are kept in check, the Atlantic world and the West in its 20th-century configuration may turn out to be short-lived accidents of history.

To succeed in the game of today’s emotional politics, mainstream parties need to play by its rules. In such an emotionally loaded political environment, leveraging emotions should not be left to the populists alone. The rhetoric adopted by the Remain camp in the Brexit debate, for instance, failed because it was too rational at a time when the electorate was highly emotional, partly because of the financial crisis and partly because of globalization more broadly. After all, voters, even the most informed and politically aware, often think and act with their hearts.

Therefore, responsible politicians should themselves leverage the past, which offers ample evidence that progress in the future is always still possible. They should not allow irresponsible nationalist leaders to monopolize, mobilize, and manipulate the history of their countries. They can counter restorative nostalgia with reflective nostalgia, fighting homesickness by making their citizens somewhat sick of home.

Excerpted from the forthcoming book Anglo Nostalgia: The Politics of Emotion in a Fractured West by Edoardo Campanella and Marta Dassù, from Hurst Publishers and Oxford University Press.

Edoardo Campanella is a Future World fellow at IE University’s Center for the Governance of Change in Madrid and the co-author, with Marta Dassù, of Anglo Nostalgia: The Politics of Emotion in a Fractured West.

Marta Dassù, the senior director of European affairs at the Aspen Institute, was Italy’s deputy minister of foreign affairs from 2011 to 2014.

Nostalgia Is a National Security Threat

By idealizing the past, Americans have made themselves unsafe in the present.

Brexit Will Never, Ever End

Even if Britain’s opposing parties agree on a plan to leave the EU, national unity will be nowhere in sight.

How to Talk to a Populist About Climate Change