The latest front in a return to Cold War rivalry is the effort to build an all-American rocket for military launches.

As Russia and China increasingly threaten U.S. interests on land and in orbit, the space race that so defined the Cold War is once again becoming a focus for the U.S. Defense Department.

The latest front in the emerging scramble for dominance of the stars is the U.S. government’s attempt to develop a domestic source of rocket engines to boost military spy satellites and other sensitive payloads into space—an industry that even now still depends on Moscow.

For almost 20 years, the United States has relied on the Russian RD-180 engine to power national security space launches. But Russian President Vladimir Putin’s invasion of Crimea in 2014 and Moscow’s interference in the 2016 U.S. presidential election brought an end to the tentative post-Cold War truce. The U.S. government now increasingly views Moscow as a source of instability worldwide and the U.S. military’s reliance on the RD-180 for access to space as a liability.

The Pentagon is caught in the middle as operations in space become increasingly critical to the United States’ ability to wage war. In the face of a growing threat from Russian and Chinese anti-satellite weapons, U.S. President Donald Trump last summer announced his intent to establish a new Space Force as a separate branch of the armed services. Meanwhile, military leaders have renewed efforts to build a space-based sensor layer to detect incoming missiles.

“China and Russia have weaponized space,” acting Defense Secretary Patrick Shanahan said in April. “We are not going to sit back and watch. We are going to act.”

Part of the U.S. offensive is ending all use of the Russian engine, which powers the workhorse Atlas 5 rocket, manufactured by United Launch Alliance (ULA), a joint venture of Lockheed Martin and Boeing. The Defense Department is racing toward a congressionally mandated deadline of December 2022 to fly the first all-American rocket, powered by domestically produced engines, for U.S. national security space launches.

“I don’t think one could overstate how important this is,” ULA CEO Tory Bruno said in a recent interview. “One could say space, undefended or undeterred from aggression, could be considered our Achilles’s heel.”

The four companies vying to secure two slots for rocket contracts with the Department of Defense. 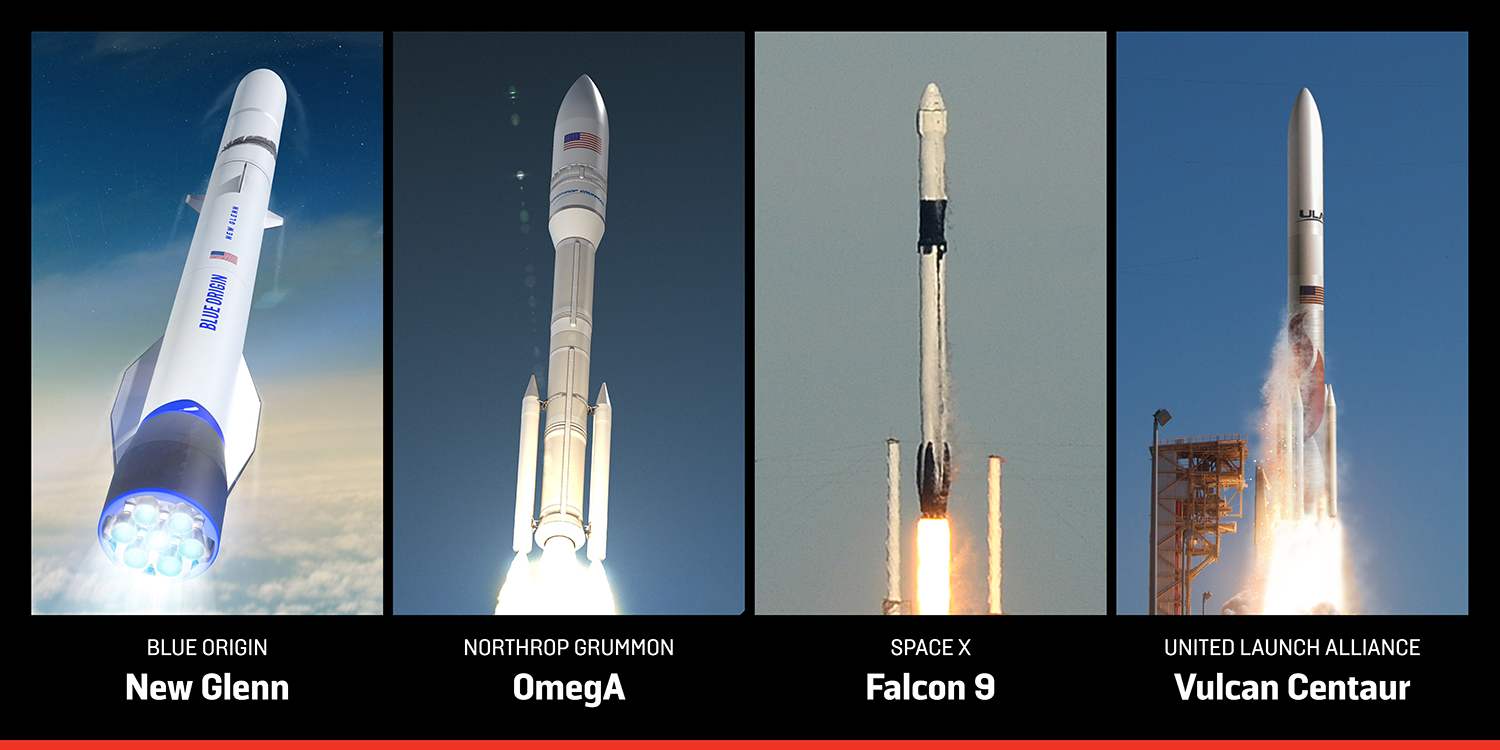 But many in industry are questioning the way the U.S. government is going about setting up the competition, alleging that the incumbents have an unfair advantage. Four companies are vying for two available contracts: ULA, the longtime defense contractor Northrop Grumman, and two relative newcomers that have shaken up the industry, Elon Musk’s SpaceX and Jeff Bezos’s Blue Origin.

For the industry players, the stakes are astronomical. The two winners would get 25 launches, which at $100 million to $150 million a pop could add up to $3.8 billion, estimated Todd Harrison, the director of the Aerospace Security Project at the Center for Strategic and International Studies.

On the other hand, the losing firms would be cut out of national security space launches for the next five years.

In the 1950s and 1960s, the U.S. military used modified intercontinental ballistic missiles to launch sensitive spy, communications, navigation, and other satellites into space. In the 1970s, the U.S. Air Force and NASA collaborated on a space shuttle program that would serve America’s military and civil needs. But after the space shuttle Challenger exploded in 1986, President Ronald Reagan directed the military to develop a “mixed fleet” of multiple vehicles that would ensure redundancy in space launch, setting the stage for the modern rocket industry.

The Russians, meanwhile, were also investing in space launch, sending satellites into orbit at a faster pace than the Americans. To support the demand, Moscow developed a high-performance, low-cost engine, the RD-180, which no other competitors could match.

“Until recently, no one else in the U.S. was able to develop a thrust chamber that could withstand as high pressure as the RD-180, and that’s what led to it being so efficient,” Harrison said. “The Russians make an incredibly good rocket engine.”

At the time, Washington was more than happy to let Moscow maintain an edge in space launch. The more time Russian engineers spent on space exploration, the less they would have to sell missile technology to rogue nations like North Korea.

So, as the defense contractors Boeing and Lockheed Martin sought to develop modern rockets that could serve the U.S. military’s needs in the 1980s, they looked to Moscow. Lockheed ultimately chose the RD-180 to power its Atlas 5 rocket, while Boeing went with engines manufactured by the U.S. firm Rocketdyne to boost its Delta 4 launch vehicle for heavy payloads.

The two companies soon discovered that their rockets could not compete with lower-cost Russian rockets or the European Space Agency’s Ariane boosters for commercial contracts. This left the two firms scrambling for the small but lucrative market of national security launches with the likes of the U.S. Air Force and the National Reconnaissance Office.

After years of ugly lawsuits over competing bids, the Pentagon in 2005 brokered a deal: Lockheed and Boeing would merge their rocket businesses into one venture, ULA. With its Delta 4 and Atlas 5, ULA would have a monopoly on all U.S. military space launches. The Pentagon was happy, too; ULA provided assured access to space, even if one rocket relied on a Russian engine.

Enter SpaceX. Even though the plucky start-up had not yet flown any rockets, Musk saw a significant market opportunity. He sued to stop the merger in October 2005, arguing that Boeing and Lockheed had used “strong-arm tactics” to gain “exclusive” rights to the Air Force launch contracts.

The deal ultimately went through, and ULA held a monopoly on military space launches for more than a decade. From 2006 to 2013, ULA held fixed contracts with the U.S. military that totaled roughly $1 billion a year, regardless of how many rockets it launched. ULA had a stellar record, never losing a single payload, but costs began to soar. By 2014, the average cost of each launch had risen to roughly $420 million. But in a single provider market, the military had no other option to ensure access to space.

Musk was undeterred. After several failed launches, SpaceX completed the first successful flight of its Falcon 1 rocket in 2008. Later that year, the company won a contract for commercial cargo transport missions with NASA. In the next few years, Musk started developing the Falcon 9, a much more powerful vehicle that he believed could rival the Atlas 5.

By 2014, Musk though it was high time SpaceX was allowed to bid on national security space contracts. He filed a lawsuit protesting the U.S. government’s “block buy” agreement with ULA, a massive contract that gave the firm exclusive rights to dozens of launches to be flown over the rest of the decade. SpaceX had not been allowed to compete for the work, because the Falcon 9 had not yet been certified for national security missions.

This time, the gambit worked. The military agreed to accelerate certification of the Falcon 9 and opened up a number of the planned launches to competition. SpaceX won several of the launches and lifted its first national security payload into orbit in May 2017.

But around the same time, another problem was erupting for the Pentagon and incumbent ULA. After Russia invaded Crimea in 2014, several lawmakers, led by Sen. John McCain, protested ULA’s use of the RD-180 and issued a deadline for the Pentagon: The U.S. military must end reliance on the Russian engine by December 2022.

“This legislation is vital to ensuring the United States does not depend on Vladimir Putin’s regime for assured access to space,” McCain said in 2016, adding that it was “morally outrageous and strategically foolish to ask American taxpayers to subsidize Russia’s military industrial base.”

Fast forward to the present day. With investment from the Air Force under specialized contracts called “public-private partnerships,” several companies have been working hard to develop new launch vehicles powered by domestic rockets that can satisfy all of U.S. national security needs.

Competitors for the Air Force’s National Security Space Launch (NSSL) program, which will select two companies to win 25 launches over a five-year period, have until August to submit their proposals. ULA is offering its new Vulcan Centaur rocket, which utilizes many of the same technologies of the Atlas 5 but features a new U.S.-made engine, Blue Origin’s BE-4. Separately, Blue Origin is offering its New Glenn, a reusable vehicle also powered by the BE-4. Finally, Northrop Grumman is proposing the OmegA rocket, powered by a variant of the solid engines that lifted the space shuttle into orbit.

SpaceX is also expected to bid—with its Falcon 9, new Falcon Heavy designed for larger payloads, or even its newest Big Falcon Rocket, which has not yet been certified for military space launches. However, SpaceX may be at a disadvantage, as it notably did not win funding from the Air Force, as the other three contenders did, in the last round of bidding for development contracts.

With so much at stake, sparring between the competitors has turned nasty. Some bidders allege that the competition is rigged.

“Everything they’ve done favors the incumbents,” said one industry executive, speaking on condition of anonymity due to the sensitivity of the competition, referring to ULA and SpaceX.

The executive argued that the Air Force had rushed the procurement unnecessarily, putting newcomers at a disadvantage. The competitors should be given more time to develop their launch vehicles, the person said. As the competition stands, none of the bidders will be ready for its first flight until 2021.

Meanwhile, some experts argue that the decision to limit the winners to two companies could choke a burgeoning commercial market.

“In the 1990s, if the government did not fund the development of a launch vehicle, it wasn’t going to happen,” Harrison said. “Now we are in an environment where you already have multiple companies in the market. … If the Air Force played its cards right, [it] could end up with more than two launch providers.”

Former Virginia Rep. Barbara Comstock, who is now a Blue Origin advisor, made a similar case in a recent op-ed, urging the Air Force to consider selecting three firms, rather than two, for the five-year deal.

“A decision to select just two launch service providers for such an extended period would perpetuate the current market duopoly for national security space launches and eliminate incentives for either provider to compete on price or build a better rocket,” Comstock wrote. “The NSSL was not intended to maintain the status quo. We must win the future.”

But ULA CEO Bruno pushed back, arguing that the market for national security space launches, while it has potential to grow over the next few decades, is still too small to support more than two “healthy” providers.

Despite the objections—and the likelihood of a bid protest—the Pentagon maintains it will not alter the terms of the contract. Ellen Lord, the Defense Department’s top weapons buyer, pointed to a “very large commercial market” in addition to the defense market that the firms could tap into.

“Launching into space is a critical capability for us, and I very much support the market working in a free and open way,” Lord said. “Space is growing, so although we have two awards in this contract, there is enormous opportunity overall.”

‘The 21st-Century Space Race Is On’

Confidence, Humility, and the United States’ New Direction in the World

Corruption in Afghanistan as ‘Big a Threat’ as Taliban

Oh God, Not Another Long Telegram About China