‘In Russia We Have Total Nepotism’

A conversation with Karina Orlova, the Washington correspondent for the Echo of Moscow.

Welcome to The View From There, Foreign Policy’s newest column, in which foreign correspondents in Washington talk about what’s making news in their home countries. Foreign Policy recently spoke with Karina Orlova, the Washington correspondent for the Echo of Moscow, Russia’s best-known independent radio station.

She described how alleged vote-buying in a TV talent show has gotten Russians riled up, talked about the challenges of being a Russian journalist in Washington, and explained why she had to flee Moscow after she faced death threats. What follows has been lightly edited for clarity and brevity.

Welcome to The View From There, Foreign Policy’s newest column, in which foreign correspondents in Washington talk about what’s making news in their home countries. Foreign Policy recently spoke with Karina Orlova, the Washington correspondent for the Echo of Moscow, Russia’s best-known independent radio station. 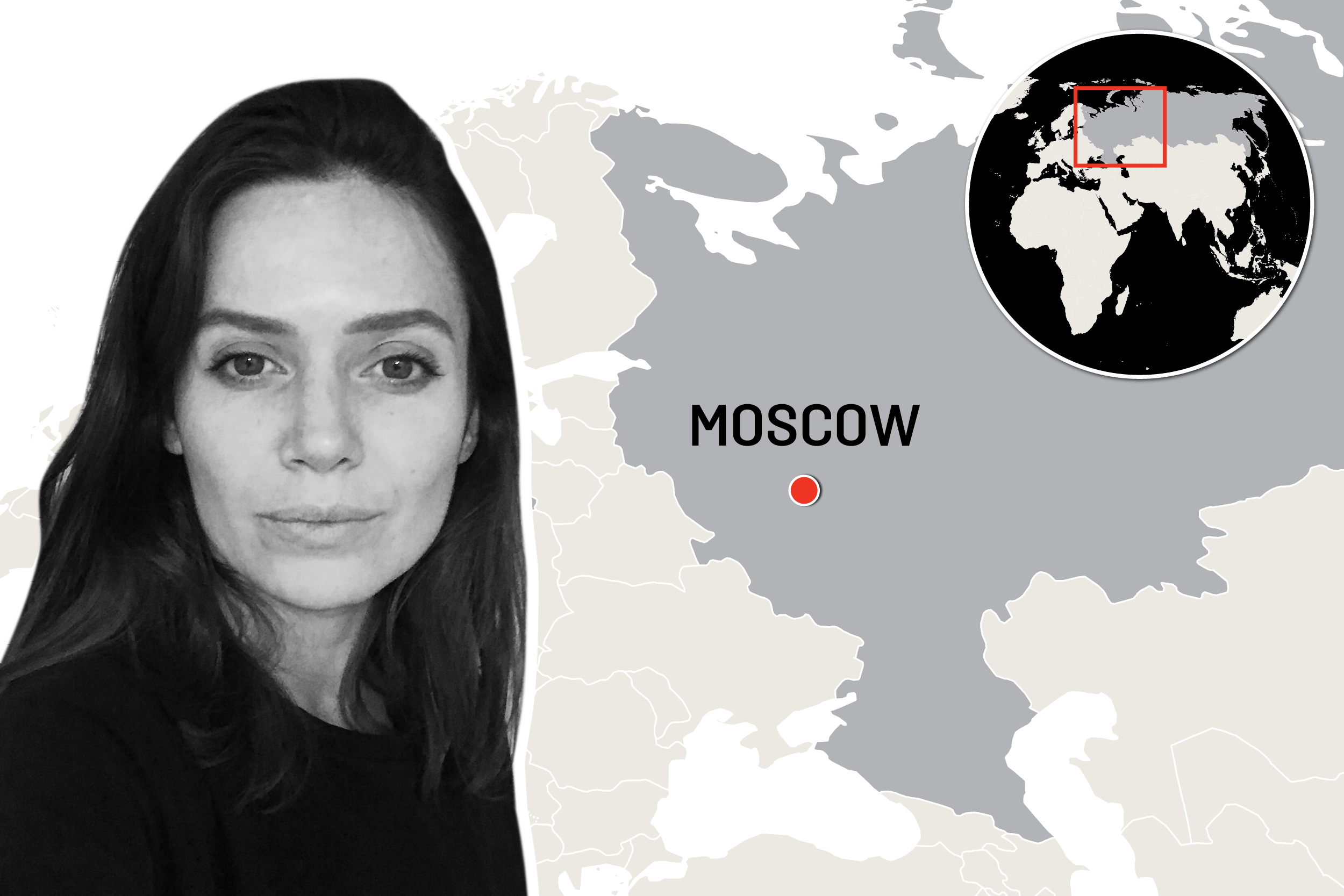 Karina Orlova, the Washington correspondent for Echo of Moscow and a contributing writer for the American Interest.

She described how alleged vote-buying in a TV talent show has gotten Russians riled up, talked about the challenges of being a Russian journalist in Washington, and explained why she had to flee Moscow after she faced death threats. What follows has been lightly edited for clarity and brevity.

Karina Orlova: So there’s this TV show where kids go on stage and sing. It’s called Golos [Voice]. It’s like kind of America’s Got Talent for the kids. It’s a very expensive show and very popular among Russians. And suddenly, the daughter of a famous Russian singer, Alsou—Alsou is also the daughter of an oil magnate in Russia—wins this TV show.

The thing about it is that her daughter cannot sing at all. And there are other really talented kids in this show. And suddenly it was all over the news. On television channels, in the news, in the press, everywhere. So I had to watch this video where this daughter, her name is Mikella, sings. And she can’t sing. And it’s horrible. And she wins the show.

The winner is chosen by viewers, who vote by sending in texts. And suddenly it became a scandal, so [the makers of the TV show] announced that they will check the vote-counting system.

But what’s curious about it is first of all is that in Russia, we don’t have fair elections. We have total nepotism. At the same time a daughter of Vladimir Putin, Masha, his alleged daughter, is announced to be the head of some presidential counsel or whatever, something that would receive money from the state budget and everyone is okay with that. But then Alsou’s daughter wins a contest unfairly and it’s a scandal. On Echo [the radio station Orlova works for] they’re not discussing her singing, but rather they say that it was probably that Golos was maybe the last opportunity for Russians to have some kind of justice. And then, even there, there’s apparently a way for someone to pay for her to win.

FP: Do you think that it also taps into the fact that TV is a form of escapism, and they’re even still seeing what happens in national elections reflected in TV?

KO: Yes, exactly. TV is big in Russia. It’s a big friend of almost every Russian, because this friend tells people what to think, what to do.

FP: Of all the lies that Russian state TV has told, why do you think this one has energized people so much?

KO: Well, because you can change this one, because people send texts. They vote. Before that, their votes counted [at least on TV]. Now, they don’t.

FP: What do you think the American media gets wrong when they write about Russia?

KO: First of all, they almost always write about Russia only when it has something to do with America, right? Like Russia’s meddling, Russian oligarchs. So they don’t cover internal stuff, like big media events. I get it when politicians play this card that Russian fakes on social media were so damaging. They were, of course, but we should not underestimate our own American sources of fakes. Fox News, number one. And Alex Jones. And the Comet Ping Pong [restaurant], this pizza pedophile ring [an often-cited conspiracy theory spread online]. It’s not the Russians behind it. So I think that yes, of course, when a foreign government tries to interfere in the political process it’s a crime, it’s illegal. But I think there is something more important. Let’s imagine Russia ceased to exist tomorrow, no Russian trolls, no Russian nothing—would we lose a huge amount of Trump supporters? No. They’re still there. Laura Ingraham is still there. Sean Hannity’s still there. Still there without the Russians.

FP: Has it been frustrating for you to watch that as a Russian here in D.C.?

KO: Yeah, it is. I also think that Fox News is way more sophisticated than the Russians when it comes to propaganda. They use, like, these lines that will get into your head and slowly poison you little by little. Sometimes they like go just fully crazy and making things up.

FP: Do you see any other parallels between the direction the United States is heading in, and Russia? In terms of the style of governance, the style of media?

FP: Did you come here to work for Echo of Moscow?

KO: It was in 2015. After the Charlie Hebdo attack in Paris. I was threatened by Chechens and the Ingush [people from Russia’s Muslim republic of Ingushetia]. They were not directly working for Ramzan [Kadyrov, the leader of Chechnya], or at least they didn’t say it. But they were like, “You’re the enemy of Islam and the enemy of Ramzan. We’re going to kill you.” I received those threats on Facebook because of the show I hosted on Echo. Then, I kind of disregarded it, thought was just a cost of working for Echo. But then, [Russian opposition politician] Boris Nemtsov was murdered, and I received some more threats. Kadyrov threatened [Echo of Moscow editor in chief Alexei] Venediktov personally. Venediktov, the same day, he took his son, he sent him to London secretly and he kept him there. At one point, there were even police officers that guarded Echo’s office.

FP: Did you get asylum here?

KO: Not yet. I am still waiting for my [asylum] interview. And it’s not going to happen anytime soon.

FP: Have you noticed in the four years that you’ve been here, it’s become hard to get interviews with people?

KO: Let’s see what’s going to happen now after Mueller report is finished. But yeah, at some point, I felt that, just in case, they didn’t want to be compromised. If I turned out being a spy, and it was known that they met with me, and then [they’d face questions]: “Oh, yeah, you met with that Russian, right?” I totally get that, so no offense taken.

FP: How many times do you get asked if you are a spy?

KO: Not by my friends, but some strangers that I meet, talk to. They ask, Where are you from? Russia. Interesting. What do you do? Journalist. Okay. Then I have to say, “No, I don’t work for RT. No, I am not Putinist. I am actually anti-Putin.” But who believes that, right? No one. And then they’re like “Okay, yeah, and are you a spy?” But it’s fine. Even as a Russian, just in case, I don’t trust so many Russians, really. Because why not? Look at Maria Butina.

And I think those senators, or congressmen [who have been hesitant to meet with Russians], they didn’t want to be compromised, just in case. Russians have become toxic. You have to prove all the time that you’re okay, you’re normal, you’re not a spy.

On Eve of Russia Trip, Pompeo Squelches Criticism of Moscow

Mike Pompeo meets his counterpart in Russia, violence flares as the military and protesters hash out a transitional government in Sudan, and the U.S.-China trade war rumbles on.

Political chaos in Washington is what Moscow was hoping for all along, U.S. intelligence officials say. And the Kremlin would like to create more of it.

Liz Truss Wants to Be Thatcher. She's Not.

The new prime minister is making Britain look like Argentina—in more ways than one.