China’s Global Investments Are Declining Everywhere Except for One Region

As Chinese President Xi Jinping concluded the latest high-level Belt and Road gathering of world leaders in Beijing last month, China’s signature project has seemingly entered a new phase: worldwide acceptance of the Belt and Road Initiative (BRI) as a fact of international life (like it or not). So, with the wind at its back, is China doubling down on its investments worldwide? Not exactly. The total value of China’s global investments and construction contracts actually fell by $100 billion in 2018, according to data analyzed from the American Enterprise Institute’s China Global Investment Tracker. Just about every region saw a significant decline in Chinese investment or construction projects except, surprisingly, for one: the Middle East and North Africa (MENA).

A flurry of Chinese investment and construction projects in the MENA region over the last three years has made it a key geoeconomic partner for Beijing. But surely, in pure volume terms, the MENA region could not have attracted as much Chinese economic activity as sub-Saharan Africa or East Asia, right? Think again. The MENA region ranked as the second-largest recipient of investment and Chinese construction projects worldwide after Europe in 2018, as the chart below shows.

In 2018, the Middle East and North Africa leapfrogged other emerging markets as a destination for BRI projects. 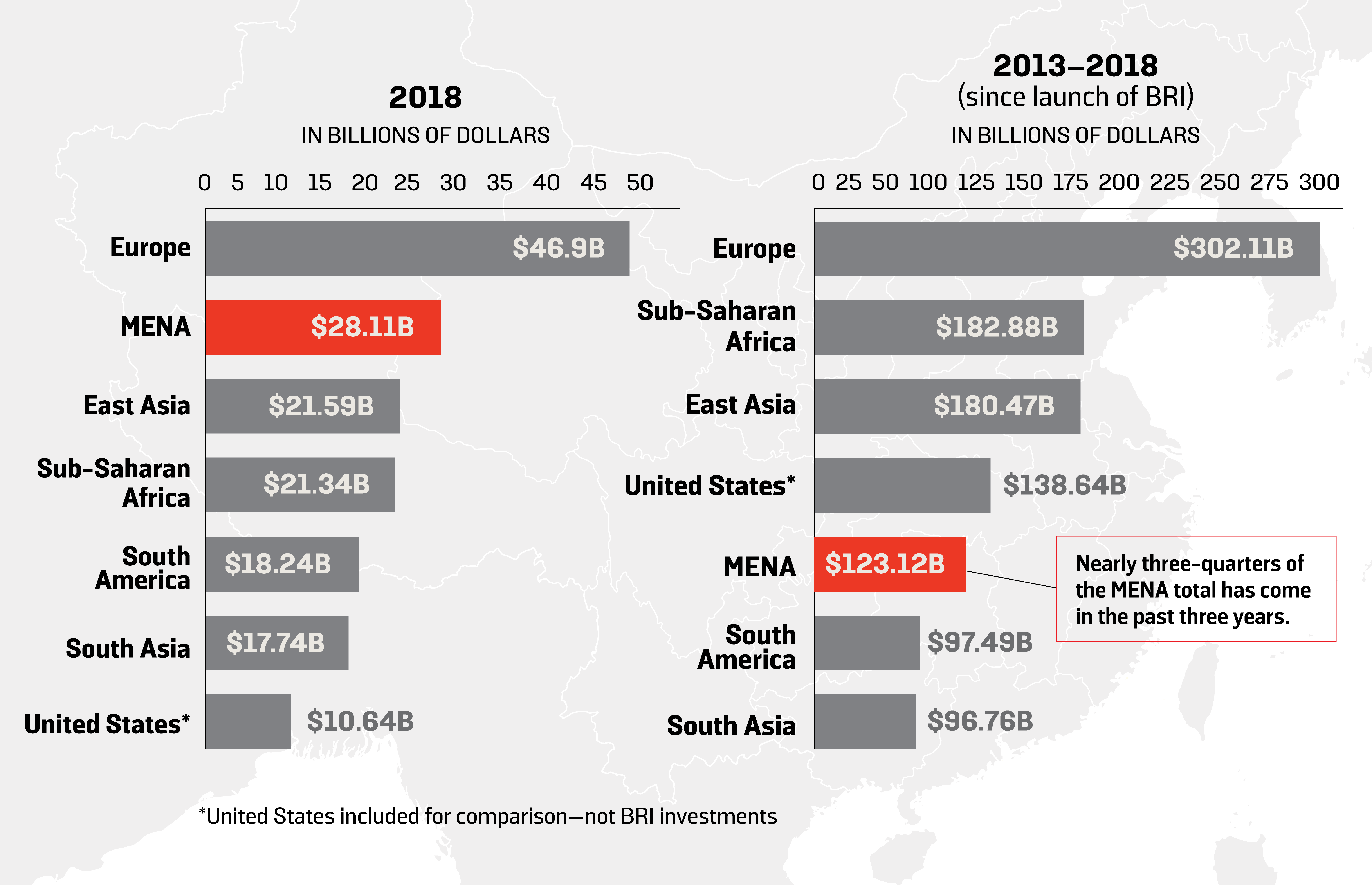 The MENA region ranked ahead of traditional BRI stalwarts East Asia and sub-Saharan Africa last year, recording $28.11 billion in new projects. The region still lags behind both those regions as a whole since the launch of BRI in 2013 and dating back to 2005, but a three-year surge has brought it in closer proximity to the top of the table. That could mean a windfall for Chinese state-owned construction companies as the majority of MENA projects involve construction, rather than foreign direct investment.

Of the 2018 MENA total, nearly three-quarters was targeted at Egypt, the United Arab Emirates, and Saudi Arabia. Those three countries also make up half of the “$20 billion club”—the group of countries with more than $20 billion worth of projects from China dating back to 2005.

MENA countries with more than $20 billion worth of investment and construction projects by Chinese firms since 2005. 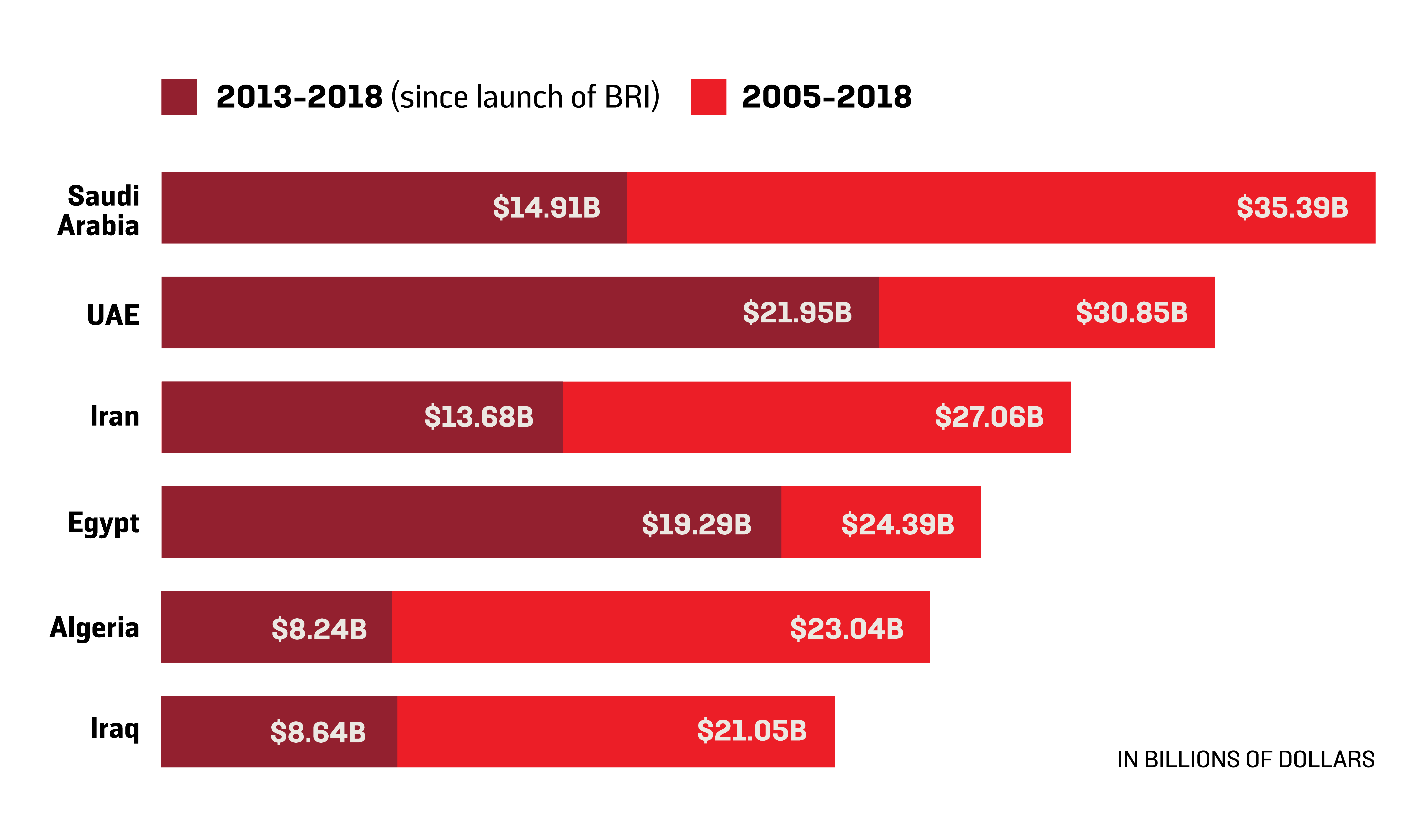 The list here is heavily skewed toward regional oil producers, with the exception of Egypt, and most of China’s projects in the region involve construction rather than investment. Despite a recent setback, Chinese state-owned enterprises will likely play a prominent role in Egypt’s ambitious infrastructure program, including the building of a new, gleaming capital city just outside Cairo. Chinese construction companies were vital in President Abdel Fattah al-Sisi’s ambitious Suez Canal economic zone project.

At the Belt and Road Forum last month, Chinese enterprises also announced a new $3.4 billion investment to build a trade hub for Chinese goods in Dubai’s Jebel Ali Port, as well as a manufacturing and processing hub for animal and agricultural products for the food industry. China’s dramatic ramp-up of projects in the UAE suggests that it sees the country as an important piece of its Belt and Road logistics network.

Other significant nodes of China’s economic footprint in the region are Israel ($12.19 billion), Kuwait ($10.43 billion), and Qatar ($7.27 billion), according to data analyzed from AEI’s China Global Investment Tracker for the years 2005-2018.

China is pouring a lot of concrete and cement into construction projects in the region but what of Middle East exports to China? How is China affecting the bottom line of key MENA states?

The answer broadly: If you have oil or gas, China is likely to be a major export destination.

Exports to China From MENA Countries

China has emerged as a vital export destination for several countries in the Middle East and North Africa. For these countries below, China made the top five in 2018. 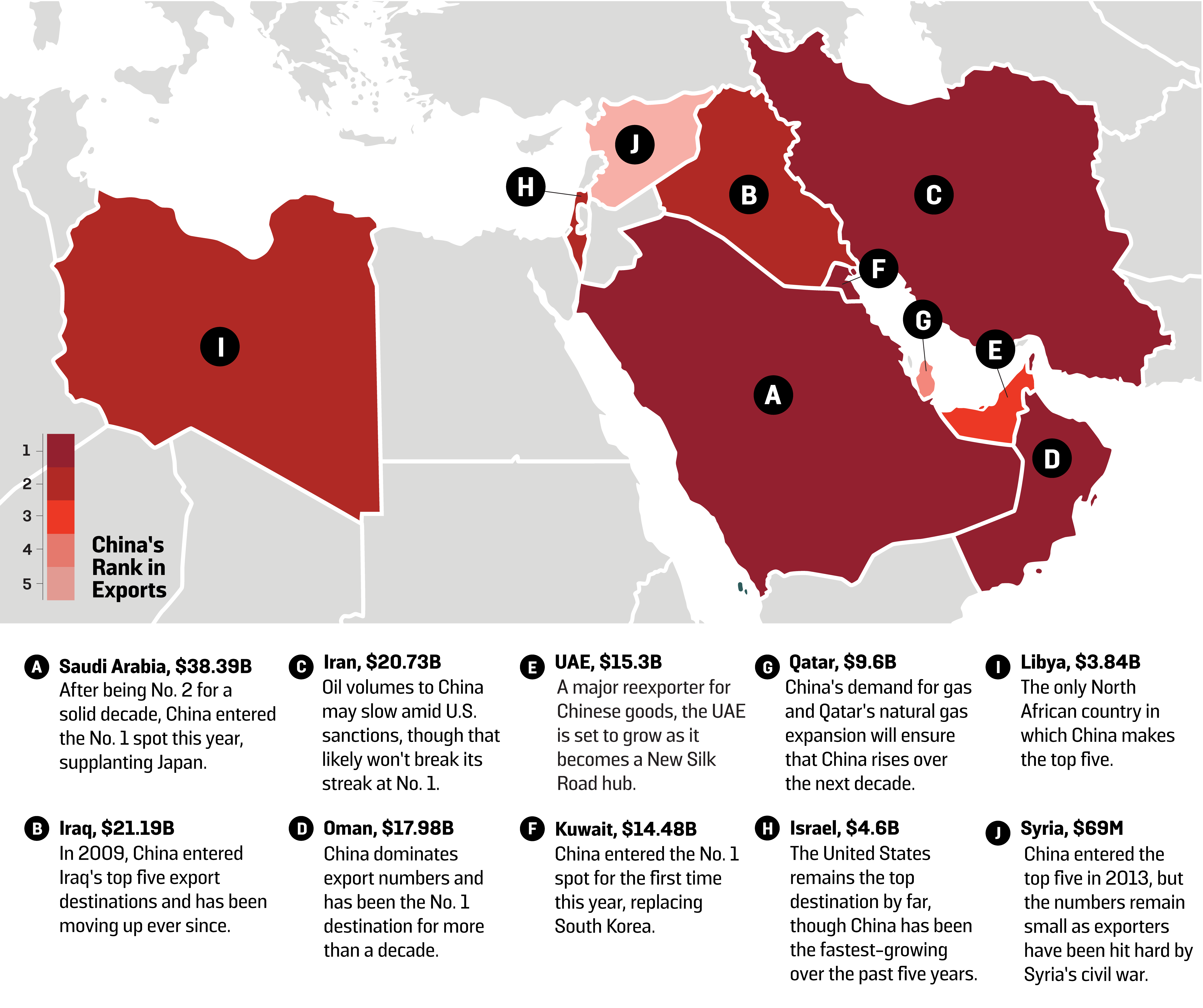 Major oil and gas producers generate significant revenues from Beijing, and China ranks as the top export destination for Saudi Arabia, Iran, Kuwait, and Oman, according to an analysis of data from the International Monetary Fund’s Direction of Trade Statistics.

For Saudi Arabia, the difference in 2018 was less stark, sending some 30 percent more exports to China than to the United States, according to an analysis of IMF data. Expect this gap to widen as the United States continues to ramp up domestic oil production.

Meanwhile, most North African countries still maintain an export profile heavily dependent on Europe rather than on China, and Israel sends four times more goods to the United States than to China.

You can expect this map to get to darker shades of red over the next decade, particularly as China’s demand for energy—especially natural gas—continues to grow.

Afshin Molavi is a senior fellow at the Foreign Policy Institute of Johns Hopkins School of Advanced International Studies and the editor and founder of the New Silk Road Monitor blog.