The U.S. ban of Huawei escalates the trade war with China, government and opposition representatives for Venezuela return to the negotiating table, and U.S. lawmakers fear skewed intelligence on Iran.

Here is today’s Foreign Policy brief: The U.S. ban of Huawei escalates the trade war with China, government and opposition representatives for Venezuela return to the negotiating table, and U.S. lawmakers fear skewed intelligence on Iran.

The Fallout of the Huawei Ban

Here is today’s Foreign Policy brief: The U.S. ban of Huawei escalates the trade war with China, government and opposition representatives for Venezuela return to the negotiating table, and U.S. lawmakers fear skewed intelligence on Iran.

The Fallout of the Huawei Ban

The U.S. move to blacklist the Chinese telecoms firm Huawei goes into effect today, marking another escalation in the trade war between the United States and China. Huawei has been added to the U.S. Commerce Department’s “Entity List,” preventing the company from buying parts or technology from U.S. suppliers without government approval.

The United States considers Huawei smartphones and equipment to be potential tools for Chinese espionage. Its ban of the firm comes after a breakdown in trade talks between the two countries and hiked tariffs.

Feeling the effects. Huawei receives components from dozens of U.S. companies, including chip manufacturers Qualcomm and Intel. These companies now require approval to sell parts to Huawei. Trade experts say that the U.S. firms could soon feel the effects, and the share prices of several Huawei suppliers fell on Thursday.

The Huawei ban threatens the company’s entire supply chain, and could delay the global rollout of its next-generation 5G networks. But the extent of the blacklist’s effects in large part depends on how the U.S. Commerce Department chooses to grant Huawei approval to buy from certain firms—if at all.

Retaliation? Huawei said it would challenge the decision, citing potential harm to U.S. companies. And if the United States intends to use the ban as leverage in further trade negotiations with China, Beijing has shown no sign of acquiescing. Instead, some warn that China could retaliate against U.S. technology companies like Apple.

Will others follow suit? U.S. President Donald Trump has encourage European allies to push back against Huawei, with limited success. (Australia and New Zealand have already done so.) The outright ban could increase the pressure to follow suit—especially on Britain, which is already concerned about Huawei’s involvement in 5G infrastructure.

Renewed talks on Venezuela underway. Representatives for President Nicolás Maduro and opposition leader Juan Guaidó are meeting in Norway in an attempt to resolve the ongoing crisis in Venezuela. The return to the negotiating table comes two weeks after Guaidó tried to prompt a military uprising, and it reflects the increasing pressure on both sides.

The opposition has the support of more than 50 countries, including the United States, where federal agents removed protesters from the Venezuelan Embassy on Thursday to make way for Guaidó’s delegation. But the path forward is still unclear: The last round of talks between the Venezuelan government and opposition collapsed nearly 18 months ago.

U.S. lawmakers fear blunders on Iran. U.S. President Donald Trump said on Thursday that he hopes the United States does not go to war with Iran, repeating what he has reportedly told top advisors in private. But U.S. lawmakers remain concerned. Four U.S. senators accused the president of “inflating threats and bending intelligence” on Iran, Robbie Gramer reports. And the chairmen of three congressional committees on national security have asked for the State Department to release an arms control report that may contain politicized assessments of Iran.

Civilian deaths in Afghanistan. As the U.S. military attempts to secure the dwindling space it controls in Afghanistan—and pursue peace talks with the Taliban—it is engaging in an aggressive air campaign with a high number of civilian casualties, Andrew Quilty reports for FP. It could be counterintuitive: “That in turn raises risks that the Afghan central government could lose more public support to the Taliban even as Kabul seeks, with U.S. help from the air, to solidify its control of the cities,” he writes.

The Australian election. As Australia’s general election on Saturday approaches, the Labor Party’s lead over the Liberals has narrowed, and Liberal Prime Minister Scott Morrison has predicted a close election. The parties have presented vastly different platforms during the campaign, with climate change emerging as a divisive issue.

Local jihadi movements. On Thursday, the Islamic State claimed credit for an attack against soldiers in Niger that killed at least 28 people near the border with Mali. Analysts shouldn’t take such claims at face value, Hilary Matfess argues for FP. Across the region, characterizing local jihadi groups as Islamic State subsidiaries could have dangerous policy implications, she writes.

British leadership. Boris Johnson, the pro-Brexit former London mayor and foreign secretary, said Thursday that he will vie for the leadership of Britain’s Conservative Party. He and several other Conservatives plan to compete to replace Prime Minister Theresa May, who will reportedly set a timetable for her departure in June. The winner of the party’s internal leadership contest will automatically become prime minister and take over the Brexit process.

The Philippines-Canada trash war. The Philippines recalled its ambassador and top diplomats from Ottawa after Canada missed the deadline to remove shipping containers of trash—exported to the Philippines nearly six years ago—from the outskirts of Manila. The Philippines’ refusal to accept foreign trash reflects a regional trend since China banned exported waste in 2018.

South Sudan fired 40 of its overseas diplomats en masse on Thursday for not showing up for work for months—and in some cases, years.

Archaeologists and historians have decried a new international airport at the gateway of Machu Picchu in Peru, saying its construction will damage the Inca ruins and local ecology. Critics have submitted a petition to Peruvian President Martín Vizcarra to reconsider the plan.

A TV channel in Russia declared the results of a popular TV talent show invalid after evidence of fraud in the contest emerged. Mikella Abramova, the 11-year-old daughter of a pop star, had appeared to win The Voice Kids in a landslide. 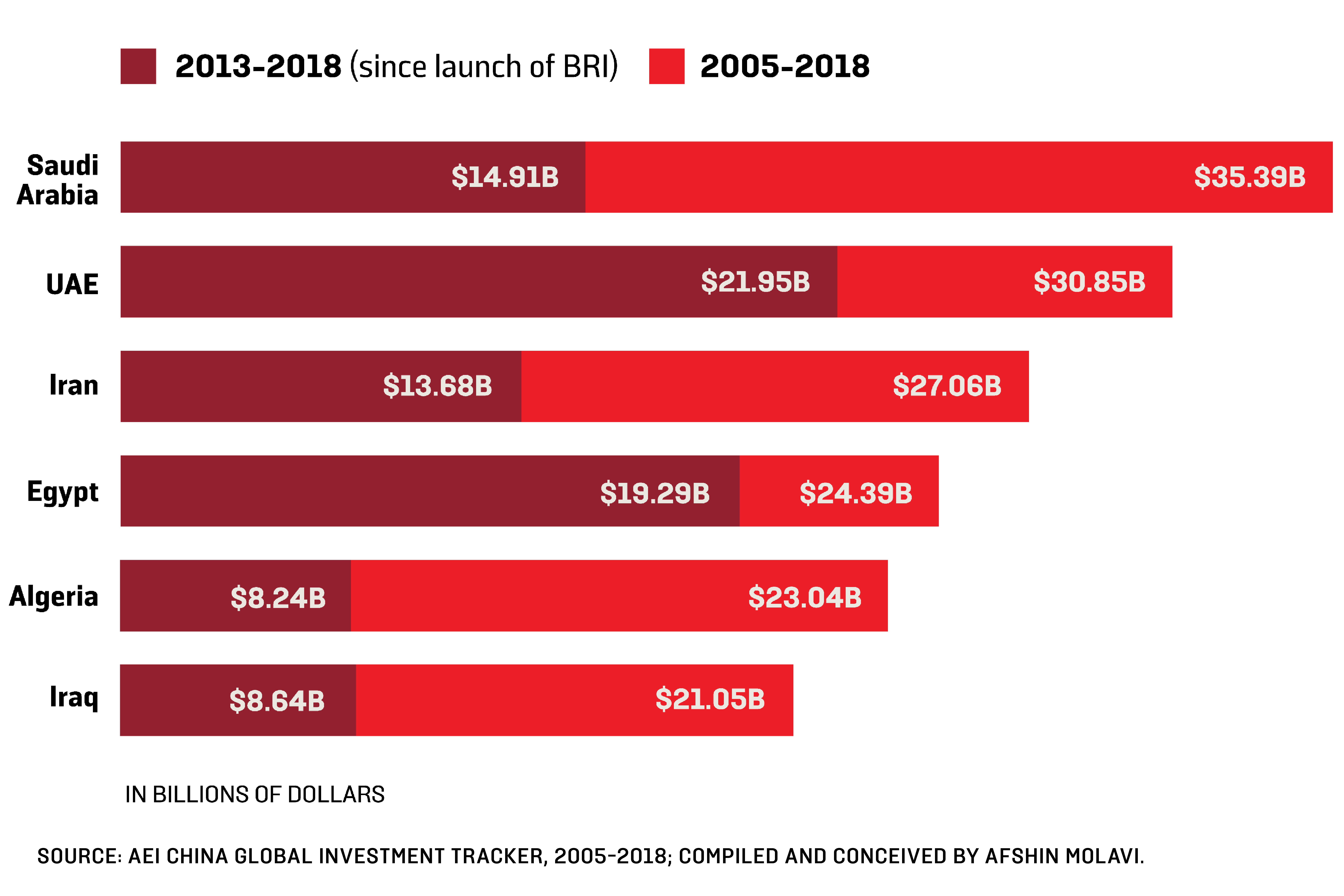 While China’s signature Belt and Road Initiative (BRI) seems to have been accepted on the global stage, almost every region saw a significant decline in Chinese investment or construction projects last year, Afshin Molavi writes for FP. The outlier? The Middle East and North Africa. Shown here are the countries in the region with more than $20 billion worth of Chinese investment since 2005.

For a decade, Nigeria has fought a brutal and drawn-out war against the jihadist group Boko Haram. The conflict, which has spread to parts of Chad, Cameroon, and Niger, is in many ways a war on children: The group kidnaps them to refill their ranks of fighters. South Africa’s Mail & Guardian profiles a teenager, Musa, who escaped the group’s clutches and is trying to rebuild his childhood in northeast Nigeria. The reporting offers a glimpse into the devastating human toll of the conflict, and how difficult it will be to end. Robbie Gramer, staff writer