Afghanistan’s Air Is Deadlier Than Its War

The respiratory ward of Kabul’s Indira Gandhi Children’s Hospital, built with Indian aid, is filled with children gasping for breath. Some scream as they’re treated, their cries echoing off the concrete walls. Amid the shrieks, doctors, parents, and patients struggle to heal, soothe, and breathe. The ward follows a seasonal rhythm—in the summers, it’s used to treat gastric issues, but during the winter, doctors treat Afghanistan’s vulnerable population for chronic respiratory illnesses that they attribute to pollution in the air, a mix of heating from homes and pollution from industrial sources.

Air pollution is killing more Afghans than the war. According to the State of Global Air, a collaborative initiative between the Health Effects Institute and the Institute for Health Metrics and Evaluation, more than 26,000 Afghan deaths could be attributed to pollution in 2017. The United Nations Assistance Mission in Afghanistan documented nearly 3,500 civilian casualties from the war for the same time period. The root cause is the burning of anything possible to get Afghans the energy and heat they need in harsh winters—including plastic, coal, and rubber. Mixed into that is the use of leaded fuels banned in the West decades ago, as well as waste energy plants and heavy industry.

The Cloud Over Kabul

Even on a clear day, the haze of pollution can be seen hanging over parts of the city. On winter days when pollution is worst, the skyline and mountains are obscured from view. On Jan. 6, the PM2.5, a measure of particulate matter in the air with a diameter smaller than 2.5 micrometers, scored over 88 on the Air Quality Index. On Jan. 7, the score was 207. Anything above 100 is considered unhealthy.

On a visit this year, I counted around 70 children being treated in the Kabul hospital. That’s more than the number of beds—a common problem in a country struggling with chokingly bad air, according to Mohim, a respiratory specialist. The staff place them two to a bed or more. When the ward is particularly crowded, patients are on the floor. Family members place blankets and scarves they brought from home on the ground. The majority of the patients in the ward are young, between 6 months and 5 years old. 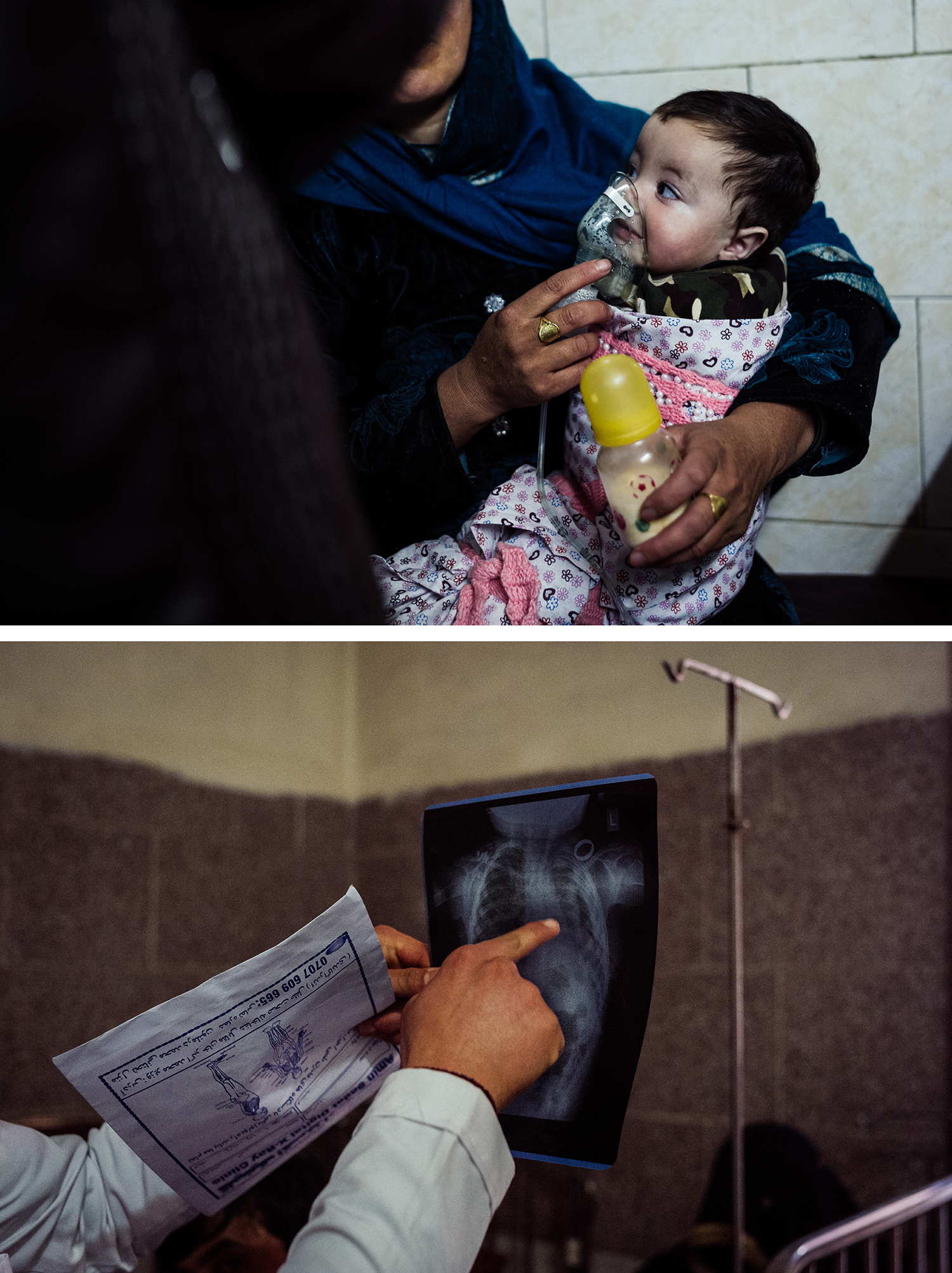 Top: Khalid, 9 months old, is held by his mother as he receives treatment for a respiratory infection at the hospital in Kabul on Feb. 18. Below: A doctor points out infected areas on a chest X-ray. Ivan Flores for Foreign Policy

Abdul Waheedi brought his son Khalid to the hospital from Paktia, a mountainous province in the east of Afghanistan, roughly 90 miles from Kabul. Khalid is only 9 months old and has been ill since he was born, according to Waheedi. In the winter, he developed a fever and an infection in his lungs. Holding his son in his arms, Waheedi said, “In my province, people use coal. You can see the pollution [in the air]. It hurts to breathe.”

Doctors at the hospital have prescribed multiple rounds of nebulizer treatment for Khalid. His mother carries him to the section in the ward where they can administer the treatment. As the machine whirs to life, Khalid begins to squirm in her arms. The nebulizer sounds like an air compressor and atomizes medicine into a fine mist that a patient can inhale. Khalid’s mother holds the mask over his nose and mouth. He screams in fear. The treatment lasts 10 minutes. 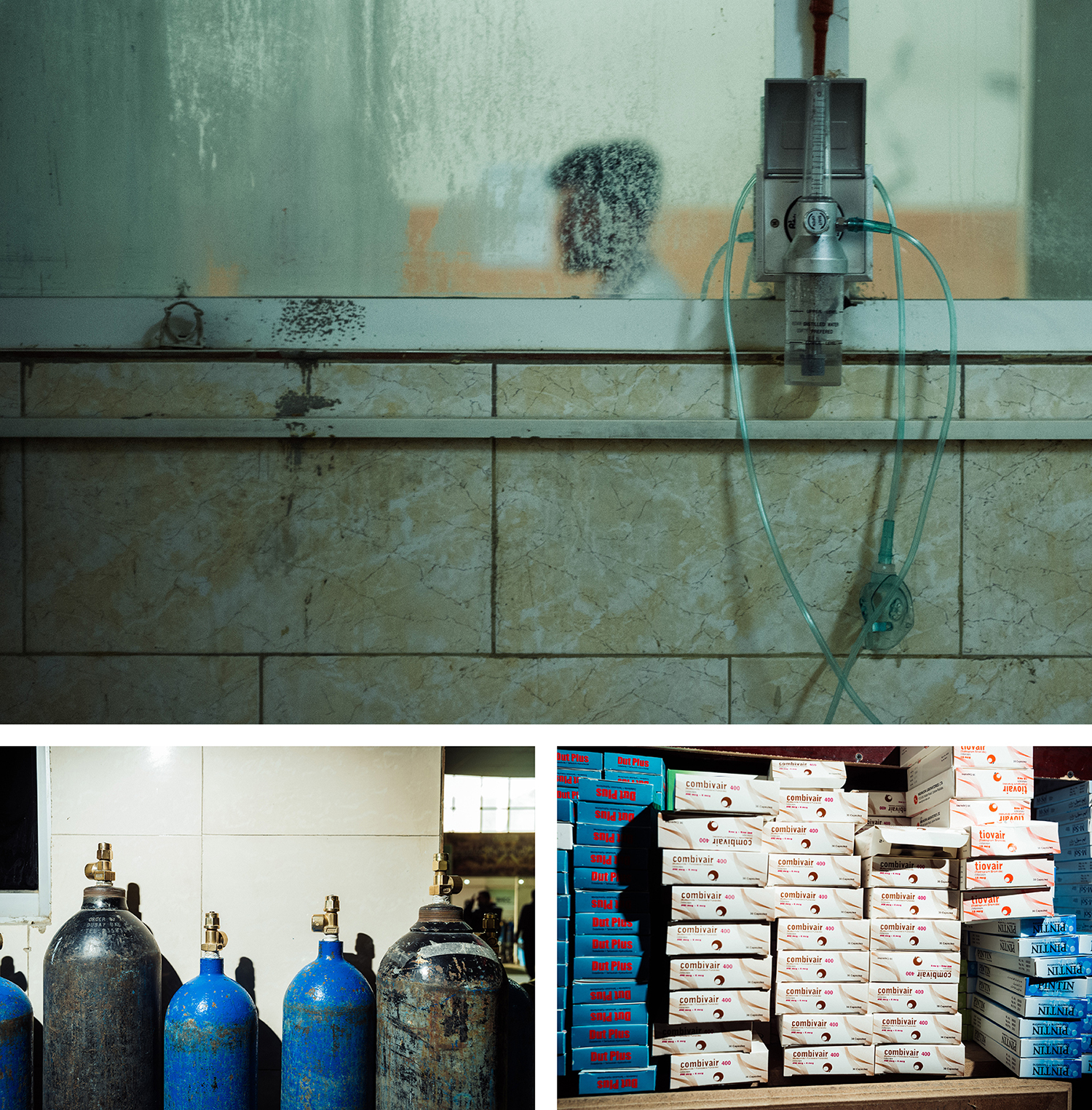 Top: A doctor walks past a respiratory machine that has been fitted with a child-size mask inside the respiratory wing of the hospital in Kabul on Feb. 18. Below: Air tanks and medication used to treat respiratory illnesses at the Kabul clinic. Ivan Flores for Foreign Policy

Mohammad Fahim, a general internal medicine specialist at Blossom Health Care Center, a private clinic in Kabul, said he sees a spike in respiratory cases every winter, when temperatures hit lows below freezing. The average low in Kabul is 25 degrees Fahrenheit, based on a calculation of data from the U.S. National Oceanic and Atmospheric Administration. Kabul’s 4 million residents burn coal or wood to survive the frigid winter. Fahim said he treats roughly 40 patients per day and that for every two patients he sees, one will have a respiratory issue.

Power outages are frequent in Kabul during the winter months, making electric heating unreliable and prohibitively expensive. Kabul’s wealthiest citizens can afford to run generators rather than rely on the public electricity system, but these generators contribute to the ever-present smog that kills thousands of people every year in the capital city. 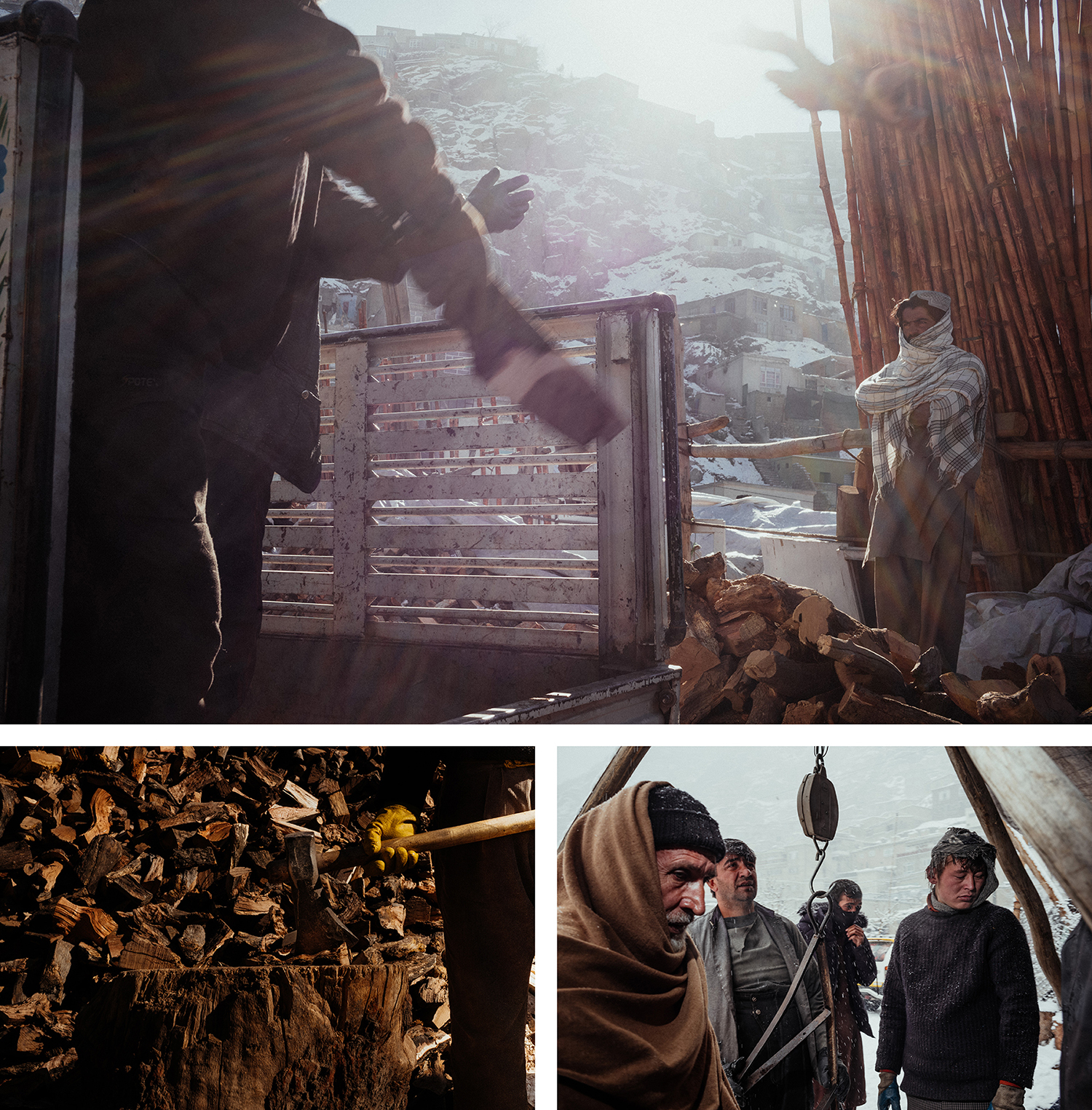 Top: Zulmai, who like many Afghans goes by one name, unloads wood from the back of a truck at his shop in Kabul on Jan. 5. Shops in some parts of the city process wood and sell coal for heat during the winter months. Below left: A laborer prepares to split wood at a Kabul lumber yard on Jan. 5. Below right: Khair Mohammad’s brother, Deen Mohammad (right), makes a sale as other customers wait to buy coal in Kabul on Jan. 5. Ivan Flores for Foreign Policy

For the majority of Afghan families, coal and wood are the only sources of heat, despite the emissions that result from burning combustibles. Those who cannot afford wood or coal, which are sold in 15-pound bundles for about $1, go out into the snow to pick through the rubbish that wealthier Afghans have discarded to search for anything they can burn—including plastics, shoes, dung, and, if they’re lucky, the charred remains of a better-off family’s coal or wood that they can incinerate in their bukharis, or traditional Afghan heaters.

Bahadar and his family live in an internally displaced persons (IDPs) camp on the outskirts of Kabul. The camp has become a semipermanent settlement that has been built up with adobe walls. According to Bahadar, the camp was originally built by IDPs from Helmand province, but they moved on. When the Helmandis left, they took the roofs and wooden support beams with them. Most of the camp now relies on tarps for roofing. Bahadar cannot afford to buy wood or coal, as he struggles to find work as a day laborer during the winter. He and his children pick through rubbish bins to find what they can. “The government doesn’t help us,” he said. 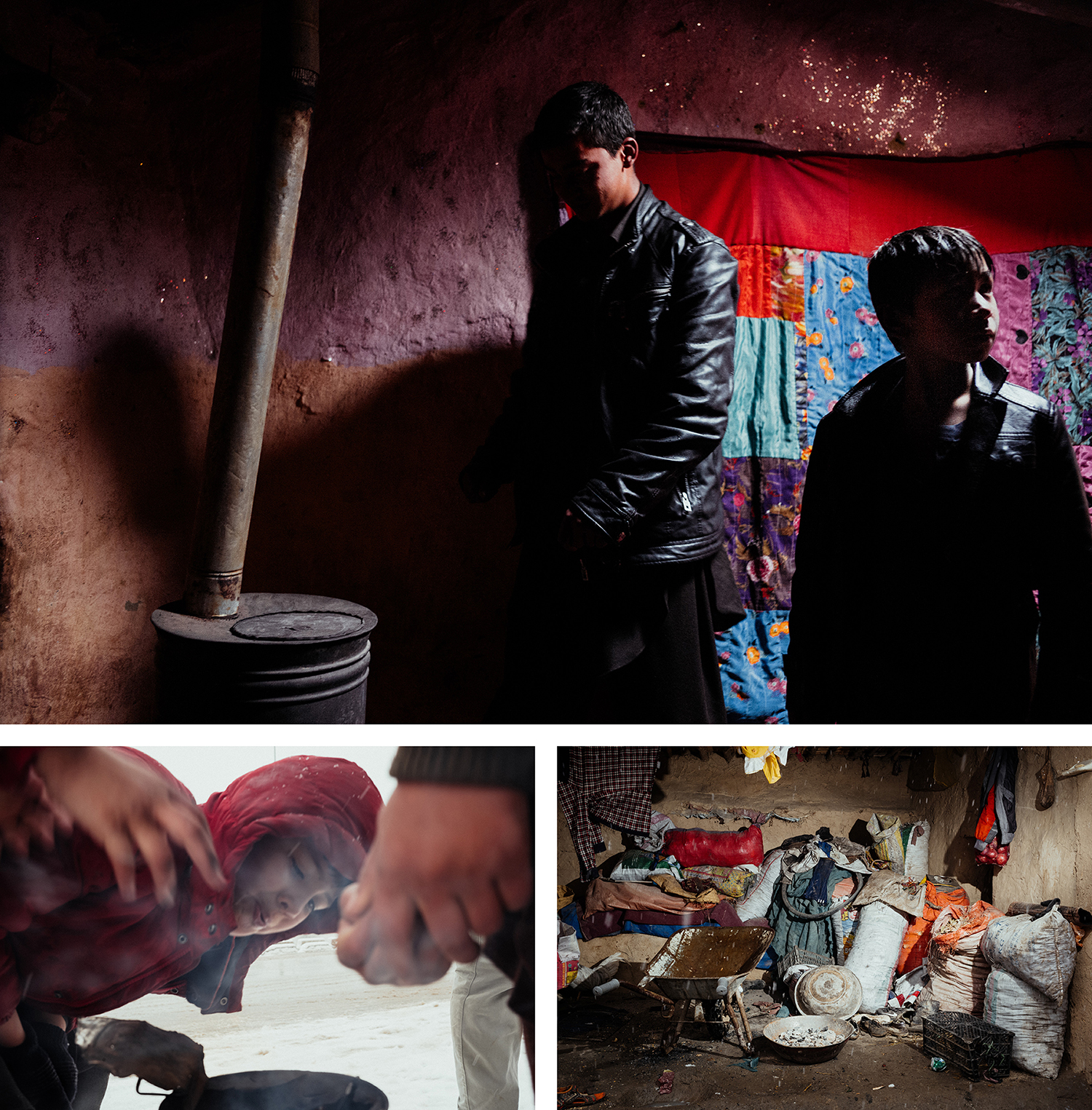 Top: Children warm themselves near a bukhari—a traditional stove typically fueled by coal, wood, or both—inside a home in an internally displaced persons camp in Kabul on Jan. 10. Below left: Bahadar’s children gather around a can burning trash near a camp in Kabul on Jan. 10. Below right: Bahadar’s family has a small cache of shoes, food scraps, rubber tubing, and other items they’ve found in the trash to burn for warmth. Ivan Flores for Foreign Policy

While the Afghan government has the capacity to shut down commercial offenders that burn substandard fuels, Ezatullah Sediqi, the deputy head of Afghanistan’s National Environmental Protection Agency (NEPA), said when the agency shuts down a company or factory because of burning substandard fuels, different sections of the government override NEPA. “They interfere in our work. Some of them say you should close [those departments and factories that burn substandard fuels], and others say not to close and allow them to stay open,” he said.

According to Mohim, the respiratory specialist, “it’s an economic issue [that] they cannot afford fuel. … Everyone suffers, but people with economic issues will burn what they can.” 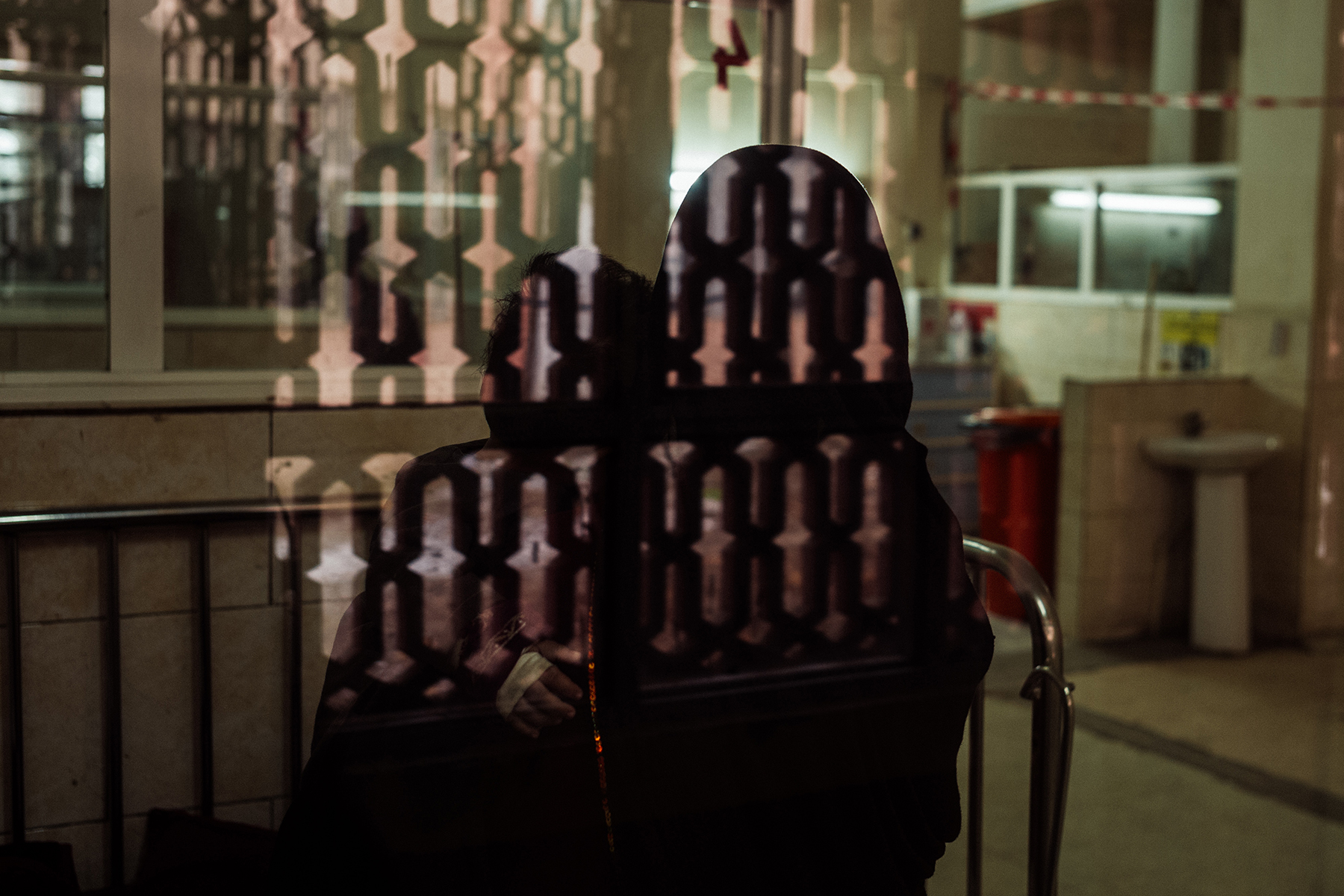 A mother comforts her baby in the respiratory ward of the hospital in Kabul on Feb. 18. Ivan Flores for Foreign Policy