Plus: Macron and Merkel remain divided over EU leadership, and the other stories we're following today.

Here is today’s Foreign Policy brief: Jared Kushner leads a delegation to the Middle East to push a new U.S. peace plan, Macron and Merkel remain divided over the EU’s top job, and a government air offensive escalates in Syria.

Here is today’s Foreign Policy brief: Jared Kushner leads a delegation to the Middle East to push a new U.S. peace plan, Macron and Merkel remain divided over the EU’s top job, and a government air offensive escalates in Syria.

Senior White House advisor Jared Kushner is leading a U.S. delegation to the Middle East in an attempt to build support for the Trump administration’s long-awaited Israeli-Palestinian peace plan—at least the economic part of it. The officials began the trip in Morocco and will travel to Jordan today and Israel on Thursday.

The trip comes ahead of a U.S.-led conference in Bahrain on June 25 and 26, where the president’s son-in-law is expected to unveil the first part of the plan: a proposal to encourage Arab investment in the occupied West Bank and Gaza Strip. Little has been revealed about the Kushner plan’s subsequent political steps.

Calls for a boycott. The Palestinian Authority already announced that it will boycott the conference for its focus on economics rather than politics, and it has called on others to follow suit. Saudi Arabia, the United Arab Emirates, and Qatar are currently expected to participate. Jordan, where the delegation meets today, could be a key player: It has yet to take a position on the Bahrain conference or the peace plan and could sway other Arab countries’ attitudes.

Israel’s current political crisis. Kushner will arrive in the region amid political deadlock in Israel. Prime Minister Benjamin Netanyahu faces a midnight deadline to form a coalition government as he squares off with his former defense minister, Avigdor Lieberman, who has refused to budge on his conditions for joining the government. As Netanyahu negotiates frantically, he is simultaneously seeking to dissolve the Knesset, which would lead to new elections. Opposition legislators have already vowed to filibuster in order to delay the final vote on dissolution in the hope that President Reuven Rivlin will ask another politician to attempt to form a government.

Macron and Merkel divided. French President Emmanuel Macron and German Chancellor Angela Merkel still disagree over how to choose the next EU Commission president. Merkel supports the German center-right candidate Manfred Weber, whose lack of executive experience concerns some leaders—Macron included. The leaders set a deadline for next month, but the appointment could be delayed by Belgian government deadlock.

Syrian government air strikes escalate. Government air strikes in Syria—backed by Russia—have homed in on the country’s last rebel strongholds, displacing thousands and drawing condemnation from the United States. Satellite images released Tuesday showed farms and orchards burning across the country’s northwest. France has alleged that there were signs of chemical attacks during the government’s offensive, but it has yet to verify the evidence.

Turkey and Russia near missile deal. As Turkey moves ahead with a deal to purchase a Russian missile defense system—against U.S. wishes—the United States may suspend its F-35 training programs for Turkish pilots. The United States shouldn’t be so concerned, Galip Dalay argues for FP. “Given their largely opposing interests in the Middle East, Russian and Turkish cooperation faces real limits,” he writes.

Diplomacy on Venezuela. The European Union appointed a diplomatic advisor for the ongoing crisis in Venezuela as it heads up efforts for new elections in the country, hoping for support from the United States. Meanwhile, Canada announced that a regional crisis group including Brazil, Argentina, and Chile will meet in Guatemala next week.

Abortion rights in Argentina. A new bill to legalize abortion was introduced in Argentina’s lower house on Tuesday, amid continued support from activists. The Argentine Senate rejected a similar bill last year. Argentina only permits abortions in cases of rape or danger to the mother’s health.

ISIS in Iraq. After the fall of its last stronghold in Syria, the Islamic State appears to be returning to an insurgency in Iraq, Pesha Magid reports for FP. With internal divisions, state forces and loosely organized militias in Iraq are struggling to eliminate the Islamic State—despite its diminished numbers.

Academia in Hungary. Hungary’s government is working on legislation that would bring its largest academic institution, the Hungarian Academy of Sciences, under stricter government control. Prime Minister Viktor Orban has been at odds with academics for months over the reforms, which are expected to reach parliament in the next few weeks.

Alleged abuses in Sinai. Human Rights Watch has accused Egyptian security forces of committing war crimes—including extrajudicial killings and torture—in northern Sinai, where Egypt is engaged in an operation against Islamist militants. Tens of thousands have been forcibly evicted in the region, according to HRW.

A small town in Spain will change its name after a shift in local politics. Guadiana del Caudillo—“Caudillo,” or commander, is a reference to the right-wing ex-dictator Francisco Franco—saw the far-right Vox party lose in local elections on Sunday. The Vox mayor had defied a 2007 law to remove references to Franco. The new Socialist mayor vowed to change the town’s name and remove all Francoist symbols in order to receive government funding.

Tourism to the United States from China has fallen for the first time since 2003, in part due to economic uncertainty and trade tensions between the countries. Last summer, China issued a travel warning to its citizens about the United States—which retaliated with its own.

Belgium’s former King Albert II, 84, has agreed to take a paternity test that could finally put an end to a decades-long scandal. A case brought by Delphine Boël, a woman who has long claimed to be his illegitimate daughter, recently reached a Belgian court. The former king was ordered to pay a daily fine of 5,000 euros or provide his DNA. 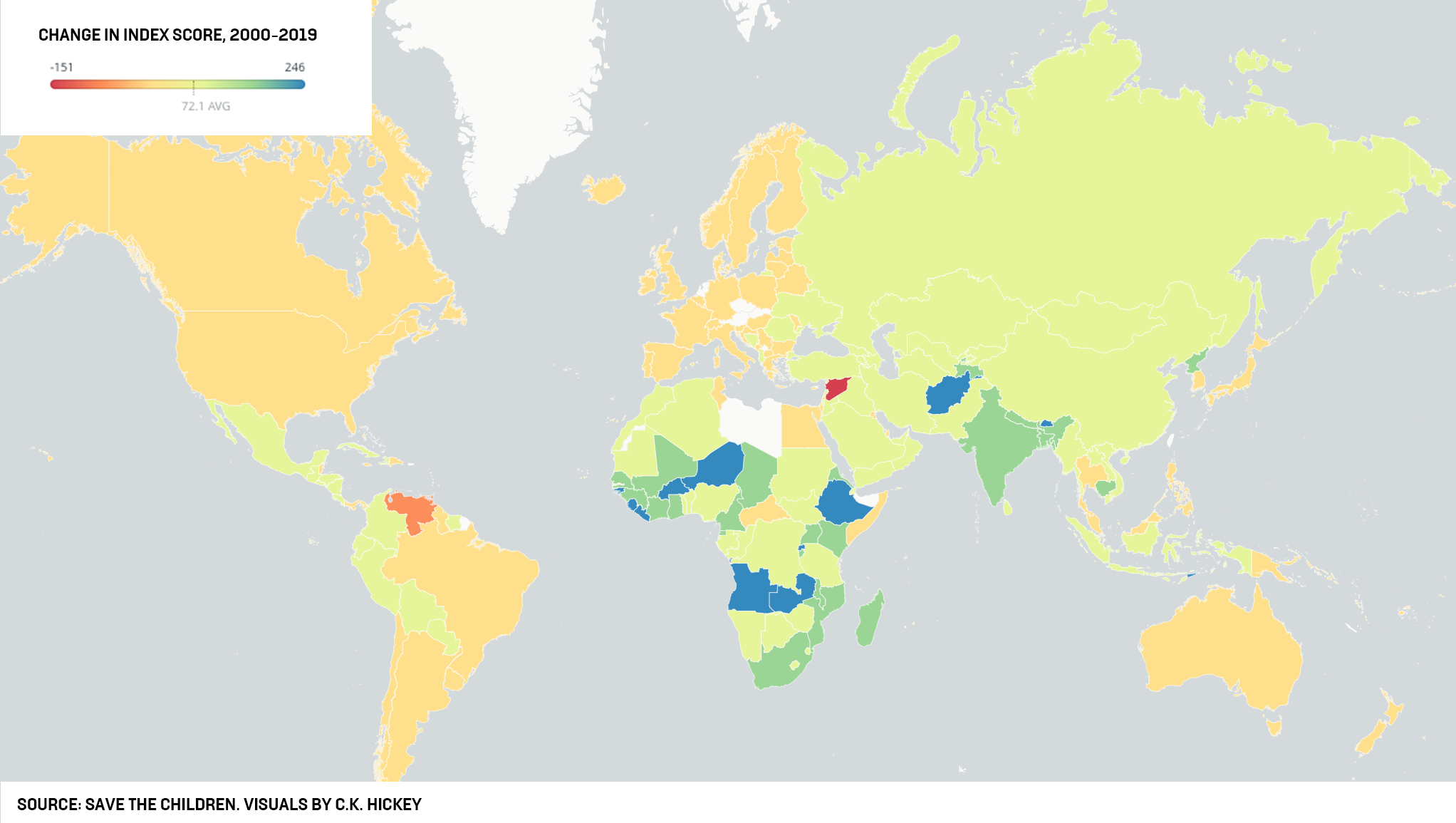 Russia and China have closed the gap with the United States in at least one area: children’s wellbeing. The United States is on par with China and just ahead of Russia in Save the Children’s End of Childhood Index, published Tuesday. The list ranks countries in terms of the number of kids affected by poverty, violence, and premature marriage and pregnancy. Since 2000, child welfare has improved dramatically worldwide, Amy Mackinnon and C.K. Hickey note. Shown above is the rate of that change by country, according to the index, since 2000.

Following the success of Okja and Snowpiercer, the South Korean director Bong Joon-ho is back this year with another award-winning film, Parasite. A mix of biting social satire and black comedy, Parasite takes a pointed look at class politics in South Korea as it follows a poor family scheming its way into a better, richer life. After winning the Cannes Film Festival’s top prize—the first Korean film to do so—Parasite hits theaters in South Korea this week and globally later this year. Shannon Schweitzer, copy chief

NEW FOR SUBSCRIBERS: Want to read more on this topic or region? Click + to receive email alerts when new stories are published on Economics, China, Russia, Middle East and North Africa, South Korea

A contest between elites rests on who voters believe can deliver for those on the bottom.

A round of violence launched by Israel’s strikes on Islamic Jihad leadership killed dozens, including children.