The Big Chill With China?

Plus: Mexico aims for a tariff resolution, protests in the Czech Republic, and the other stories we're following today.

Here is today’s Foreign Policy brief: China and the United States trade provocations on Tiananmen anniversary, Mexico’s delegation heads to the White House hoping for a resolution on tariffs, and huge crowds in the Czech Republic call for the prime minister to step down.

U.S., China at Odds as Xi Heads to Russia

Here is today’s Foreign Policy brief: China and the United States trade provocations on Tiananmen anniversary, Mexico’s delegation heads to the White House hoping for a resolution on tariffs, and huge crowds in the Czech Republic call for the prime minister to step down.

U.S., China at Odds as Xi Heads to Russia

The United States and China again traded provocations on Tuesday, this time over Chinese citizens in the United States. China re-upped its travel notice on the United States, warning companies and tourists that they could face harassment there. Meanwhile, U.S. lawmakers are trying to pass a bill—likely to fail in Congress—that would make it more difficult for Chinese students and academics to obtain visas to study at U.S. institutions.

The moves came on the 30th anniversary of the bloody military crackdown on democracy protesters in Beijing’s Tiananmen Square. It was marked in Beijing with silence and censorship, but tens of thousands turned out for a vigil in Hong Kong’s Victoria Park. China denounced comments from U.S. Secretary of State Mike Pompeo on the anniversary.

The big chill? The current situation bears a resemblance to the post-Tiananmen mood, Melinda Liu writes for FP. And with U.S. Vice President Mike Pence expected to deliver a speech on China soon, Washington could be miscalculating its stance. “Today the West needs to recognize that we are not exactly in a new Cold War—China is already too enmeshed in the international system—but rather another, if protracted, big chill,” she writes.

Xi in Russia. Today, Chinese President Xi Jinping will begin a state visit to Russia, where he will meet with Russian President Vladimir Putin, their second summit this year. Expect the leaders to reaffirm their strategic ties. Xi has made statements on Venezuela, tensions with Iran, and China’s economy ahead of the talks.

Mexico, U.S. talk tariffs. The White House hosts a Mexican delegation today, with Foreign Minister Marcelo Ebrard aiming for a last-minute compromise over immigration and tariffs on Mexican goods. Speaking from London, U.S. President Donald Trump said the tariffs—imposed if Mexico does not curb illegal immigration—are likely to go forward despite sharp opposition from congressional Republicans, whom he called “foolish.” GOP senators view things differently, and some have suggested they may have the votes to override a presidential veto.

The dispute has caused Mexican President Andrés Manuel López Obrador’s poll numbers to go up, but his popularity might suffer if it persists. The first wave of tariffs would take effect June 10.

Large protests threaten Czech prime minister. A rally in Prague on Tuesday calling for Prime Minister Andrej Babis to step down drew an estimated 120,000 people, making it the largest demonstration since the country’s Velvet Revolution in 1989. The protests against Babis, the country’s second-richest person, started six weeks ago and show no signs of stopping. The prime minister has dismissed the protests—and a European Commission report on his alleged conflicts of interest—as “hysteria.”

Britain turns to leadership contest. As U.S. President Donald Trump departs Britain with a pledge for a “phenomenal” trade deal between the countries, the British Conservative party turns to its next challenge: replacing Prime Minister Theresa May, who will step down as party leader on Friday. The party will begin to narrow the field of 11 candidates on June 13, with a vote likely the week of July 22.

Ebola infection rate triples in Congo outbreak. More than 2,000 Ebola cases have been confirmed in the outbreak in the Democratic Republic of the Congo, which is the second worst on record. The rate of new infections has tripled amid community distrust and armed attacks on treatment centers. An Islamist militia killed 13 civilians in the remote Ebola zone on Tuesday.

Australian gun laws. A gunman in Darwin, Australia, killed at least four people on Tuesday in a mass shooting—a rare occurrence in the country. While Australia has some of the world’s strictest gun-control laws, opinion polls show support for even tougher regulation, and the Darwin shooting could renew a national conversation. Neighboring New Zealand banned most semiautomatic firearms after the mosque attacks in Christchurch in March.

Cruises to Cuba. The U.S. State Department announced new restrictions on people seeking to travel from the United States to Cuba, including a ban on cruise ships. The move is intended to put pressure on Cuba’s government, and especially to put an end its continued support for Venezuelan President Nicolás Maduro.

France’s arms sales to Saudi Arabia. French weapons sales to Saudi Arabia rose by 50 percent last year, despite the French government’s call for an end to the Saudi-led war in Yemen. Earlier this month, a French human rights group tried to mount a legal challenge against a shipment because the weapons might be used against civilians. The ship left France without its cargo.

Italy’s economy. Allies of Italian Deputy Prime Minister Matteo Salvini are pushing for a new domestic currency in parallel to the euro—an idea that received backing in a nonbinding vote in the Italian parliament last week. Claudio Borghi, one of Salvini’s economic advisors and a critic of Italy’s participation in the eurozone, has championed the idea along with Alberto Bagnai, the head of the Italian senate’s finance committee. They have suggested printing new Treasury bills to pay government debts to the private sector and for people to pay taxes. However, the bills “could only become legal tender if Rome legislated to make it compulsory for them to be accepted as a means of payment,” according to the Financial Times. The country’s treasury has already rejected the idea.

Russia has added 175 companies to a list that will require them to share user data on Russian intelligence servers. The register includes Tinder, the dating app, and other private messaging services. The companies that refuse, like Telegram, could be blocked in the country. Tinder says it hasn’t shared any data yet.

Striking workers in France have blockaded the world’s largest Nutella factory for a week, barring trucks from entering or leaving. The facility usually produces 600,000 jars of Nutella per day, a quarter of global output. Negotiations are scheduled for next week.

Tourism to the Chernobyl disaster area in Ukraine, already on the rise, is booming following the success of the HBO miniseries about the nuclear accident, Chernobyl. One tour agency told Reuters its bookings had gone up by 40 percent. 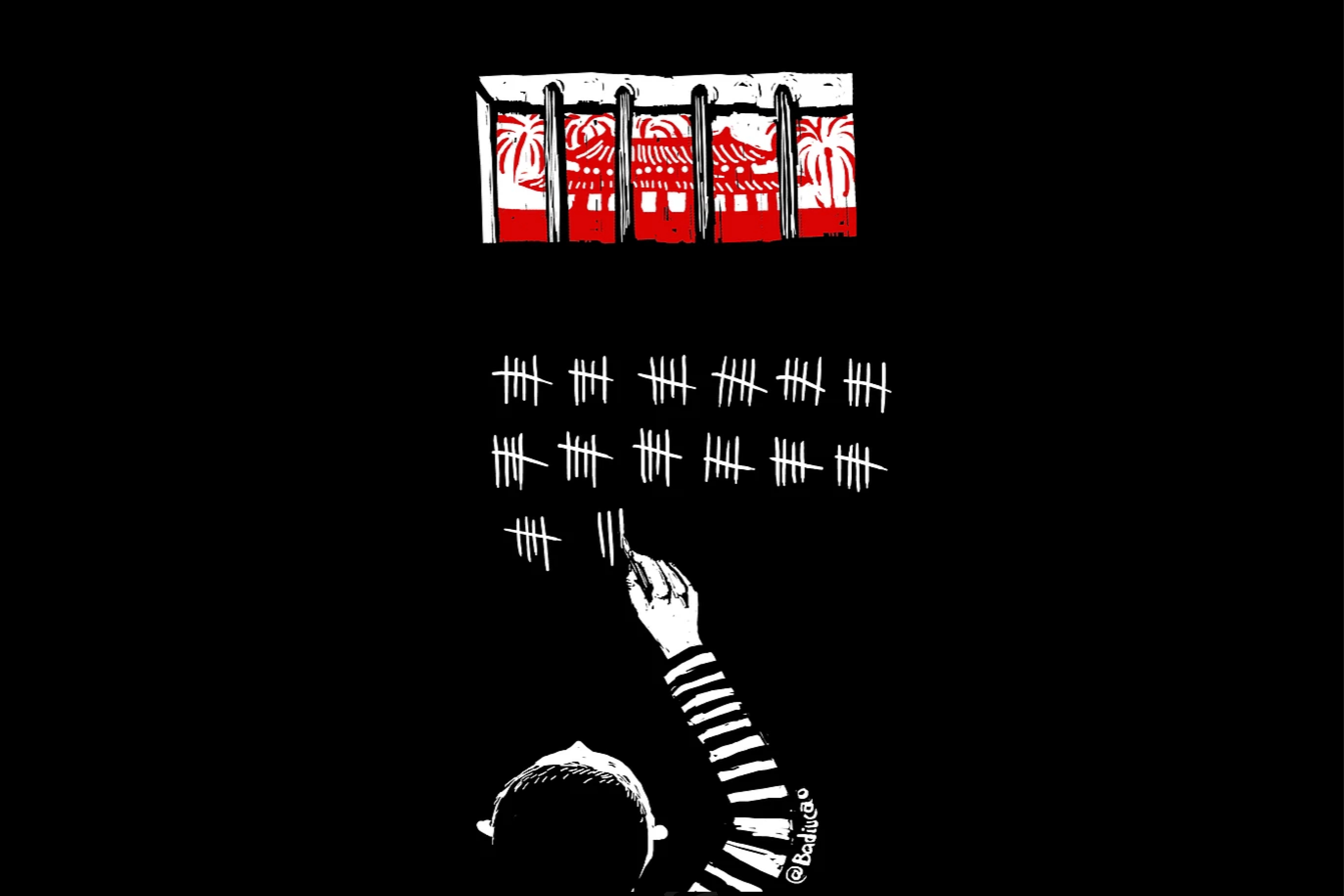 National Day, 2017: A prisoner symbolizes China’s lack of freedoms on National Day. The marks on the wall represent the number of years the Chinese Communist Party has been in power.

The famous Chinese Australian political cartoonist known only by the pseudonym Badiucao revealed his face for the first time in an Australian documentary shown on Tuesday. In FP, Bethany Allen-Ebrahimian interviews Badiucao, whose identity was uncovered by Chinese authorities in October 2018. His discussed his art, his hopes for the future in China, and the decision to show his face.

Saving the World, One Meaningless Buzzword at a Time

How corporations, activists, and politicians turned the language of human rights into meaningless babble.

Even with government crackdowns and a mounting death toll, the country’s unrest shows no signs of slowing.