Plus: Mexico faces new pressure on immigration, Germany meets with Iran, and what to watch in the world this week.

Here is today’s Foreign Policy brief: Hundreds of thousands turn out for protests against Hong Kong’s extradition bill, Mexico faces new pressure from the United States, and what to watch in the world this week.

Here is today’s Foreign Policy brief: Hundreds of thousands turn out for protests against Hong Kong’s extradition bill, Mexico faces new pressure from the United States, and what to watch in the world this week.

Hundreds of thousands of demonstrators took to Hong Kong’s streets on Sunday to protest a proposed law that would allow the extradition of suspects to stand trial in mainland China. Critics say the legislation would target dissidents and activists, erode the rule of law in Hong Kong, and put an end to the “One Country, Two Systems” framework that has allowed Hong Kong to maintain its own legal system since Britain handed over the territory to China in 1997.

Pro-democracy lawmakers called for Hong Kong Chief Executive Carrie Lam to withdraw the extradition bill, which will be reviewed by the legislature again on Wednesday. While the protest was largely peaceful, several hundred demonstrators clashed with police outside the Legislative Council building in the early hours of Monday morning.

How many turned out? Hong Kong police estimate there were 240,000 protesters on Sunday, but the protest organizers put the number at more than 1 million—or almost one in seven residents—which would make it the largest demonstration in the city since 1989. Chinese media alleged that the large protest was organized in part by “foreign forces.”

The end of Hong Kong. When Hong Kong returned to Chinese control, it did so under a rule that allowed the city to keep its institutions, including independent courts. The protesters see the extradition bill as putting an end to these freedoms, increasingly threatened by China’s ruling Communist Party since the pro-democracy Umbrella Movement in 2014.

The proposed law has enraged Hong Kong residents and alarmed foreign businesses, Hilton Yip writes for FP. “If it is passed, this extradition bill will signal the virtual end of Hong Kong not just as a distinct city under One Country, Two Systems, but also as an international business hub, because nobody in Hong Kong would be safe from China’s legal system,” he writes.

What’s next? Experts say the turnout likely won’t change Hong Kong officials’ minds, and Lam promised on Monday to push forward with the proposed changes. The bill, which is supported by China, could become law by the end of the month.

Mexico faces new pressure under U.S. deal. Mexico avoided the tariffs threatened by U.S. President Donald Trump when it reached a deal with the United States last week, but it faces intensified pressure on immigration. Mexico pledged to immediately take in more people awaiting asylum decisions in the United States, but as of Sunday there were no changes along the border. The agreement could undermine Mexican President Andrés Manuel López Obrador’s domestic priorities like curbing violent crime. Trump said that details of the deal would be announced soon.

German foreign minister meets Iran’s Rouhani. As part of a European effort to save the nuclear deal with Iran, German Foreign Minister Heiko Maas meets Iranian President Hassan Rouhani in Tehran today. Iran has threatened to continue enriching uranium to levels above the agreement’s restrictions if Europe doesn’t normalize its trade with Iran despite U.S. sanctions, and it repeated this warning on Sunday.

Civil disobedience continues in Sudan. The opposition in Sudan has called for an ongoing strike that began Sunday, leaving the streets of Khartoum mostly deserted. The mass civil disobedience is an attempt to shut down the capital until civilian rule is granted. Security forces reportedly fired tear gas and live ammunition at protesters who did take to the streets in some parts of the city. Doctors linked to the opposition said that four people were killed.

Hundreds arrested in Kazakhstan during election. Around 500 protesters were arrested during Sunday’s presidential election in Kazakhstan, which was widely seen as rigged in favor of the ex-president’s handpicked successor, Kassym-Jomart Tokayev. Exit polls showed Tokayev winning 70 percent of the vote. But the choreographed election catalyzed a small movement of activists, Reid Standish writes for FP.

Japanese Prime Minister Shinzo Abe arrives in Tehran on Wednesday, the first visit to Iran by a Japanese leader since the country’s 1979 Islamic Revolution. Japan, which relies heavily on crude oil from the Middle East, is seeking to mediate tensions between Iran and the United States.

The first round of voting in Britain’s Conservative Party leadership contest takes place on Thursday, as Tory members of Parliament begin narrowing down a group of 11 candidates. The rules were changed this year to speed up the process. Campaigning officially begins today, although the candidates have already been at it for several weeks. One of the leading contenders, Michael Gove, is facing mounting criticism after admitting to using cocaine 20 years ago.

On Sunday, Guatemala holds a presidential election in which two of the top candidates won’t participate. Court rulings last month barred Thelma Aldana, a former corruption prosecutor, and Zury Ríos, the daughter of a former dictator, from running. The vote will likely head to a runoff in August.

FP Offer—Foreign Policy is read by the people who shape the world. Help a recent graduate get started in a foreign-policy career with FP’s reporting and expert analysis. Give a gift subscription for 25% off our regular digital subscription annual rate.

Moldova’s political crisis. Amid political deadlock in Moldova, President Igor Dodon refused to dissolve parliament last week after lawmakers missed the deadline to form a government. On Sunday, a court suspended Dodon so that his replacement could call a snap election, scheduled for September. The crisis could mean even more division in Moldova, which is plagued by corruption and political instability.

Amnesty for Nicaraguan police. Nicaragua’s National Assembly passed a law over the weekend that grants amnesty to the police who participated in a violent crackdown on anti-government protesters over the last year, in which 325 people were killed. The legislation passed the day after it was introduced and drew criticism from the U.N. human rights chief.

Russian internet censorship. The announcement that Russia asked the dating app Tinder to hand over user data is just the latest move in the country’s clampdown on free speech online. Experts doubt Russian authorities can fully enforce two recent censorship laws, but they do have a chilling effect, Amy Mackinnon writes.

Even with its lowest fertility rate in years, Japan is experiencing a shortage of day care workers, the New York Times reports. More than 20,000 kids are on waiting lists for subsidized childcare. Part of the problem? Childcare workers who have babies of their own are often forced out of work.

Barcelona has issued the famous Sagrada Família, designed by the Spanish architect Antoni Gaudí, its first building permit—137 years after construction on the church began. The permit runs through 2026, when builders say the work will finally be complete. 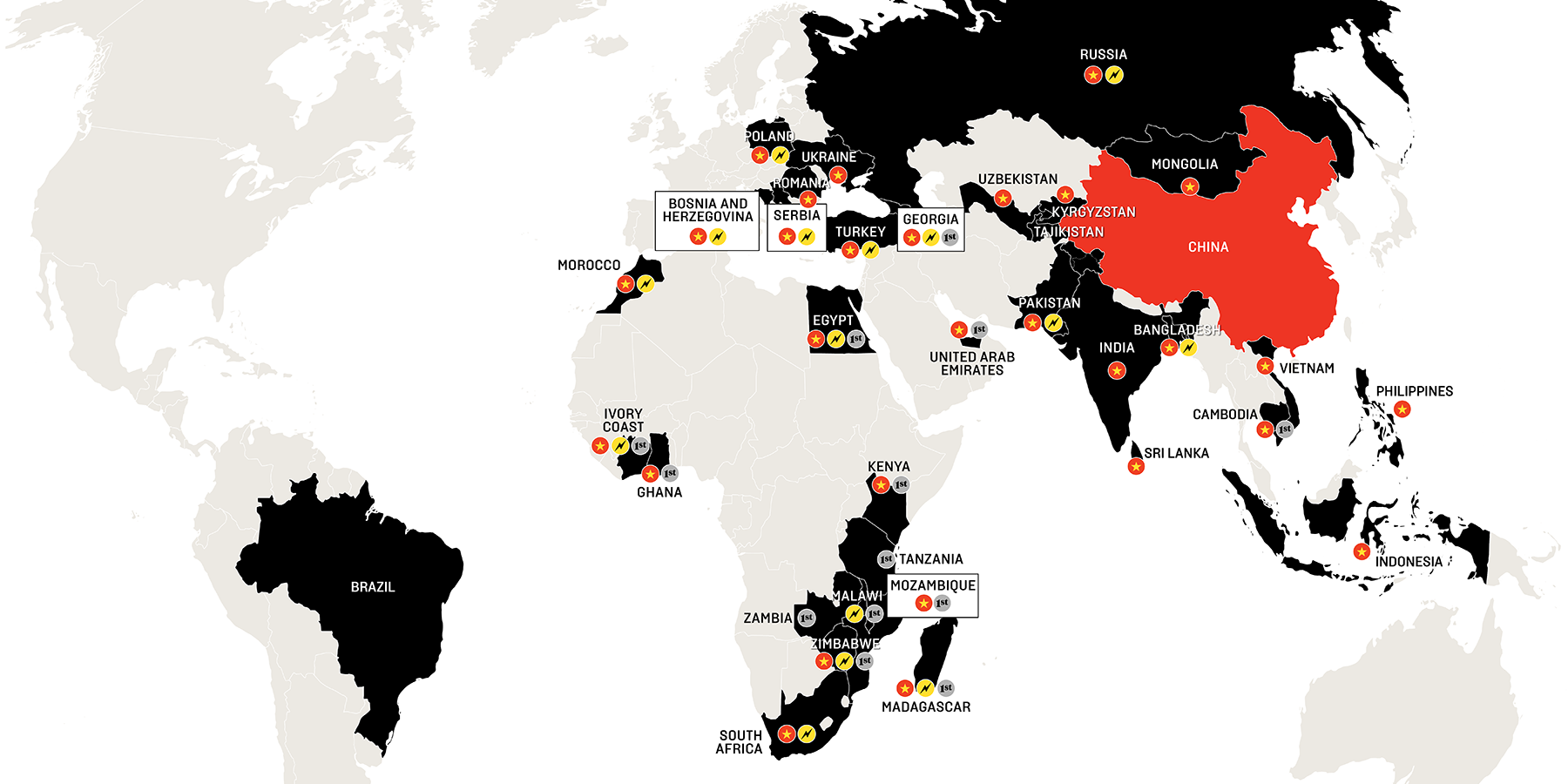 As it reduces domestic carbon emissions to meet Paris climate agreement targets, China is exporting its high-pollution coal industry, Dana Ullman reports for FP. It has 200 coal projects in 34 countries—some of which are shown above. Chinese coal equipment and technology is poised to transform Kenya’s scenic Lamu Island, which boasts a UNESCO Heritage site and a growing tourism industry. Critics say the looming coal projects threatens the island’s biodiversity and the local community’s way of life.