Plus: New U.S. sanctions on Iran, migration enforcement ramps up in Mexico, and what to watch in the world this week.

Istanbul held its second mayoral election in three months on Sunday, and Turkey’s main opposition party delivered another blow to the ruling Justice and Development Party (AKP) and President Recep Tayyip Erdogan. Ekrem Imamoglu, the candidate for the Republican People’s Party (CHP) who won the initial election on March 31, claimed victory again—this time decisively. With nearly all ballots counted, he led with 54 percent of the vote to the AKP’s 45 percent.

The AKP demanded a rerun after the CHP’s narrow victory in March, and it was granted by Turkey’s High Election Board. Many observers see the second CHP victory as a direct rebuke to Erdogan, who has held power in Turkey for 16 years. “Today, 16 million Istanbul residents have renewed our faith in democracy and refreshed our trust in justice,” Imamoglu told a crowd of his supporters.

Does the mayor matter? Erdogan began his own political career as the mayor of Istanbul—Turkey’s largest and richest city. The position remains “an important stepping stone into national politics,” Fariba Nawa reports for FP. Until Imamoglu’s March victory, the AKP (and its predecessor party) controlled Istanbul for 25 years. And local politics spilled over into national politics: “The AKP no doubt improved the lives of Istanbul residents during its rule,” Nawa writes. “Those gains made Erdogan incredibly popular.”

What does this mean for the AKP?  The rerun of the March election was rare, and the AKP won’t contest a more decisive victory. (Both Erdogan and the AKP candidate, Binali Yildirim, congratulated Imamoglu on Sunday.) As Can Selcuki predicted in FP after the rerun was announced, Erdogan’s refusal to accept the earlier election result seems to have backfired. “If history has taught us anything, it is that Turkish people like their ballot box unfettered,” he argued in May. The big loss—by a margin of nearly 800,000 votes compared to just 13,000 in March—could even lead some key party figures to leave the AKP. Even if weakened, Erdogan himself won’t face another election until 2023.

Could Imamoglu be aiming higher? Some analysts speculate that Imamoglu himself could challenge Erdogan for the presidency four years from now, using the mayor’s office as a springboard to higher office, just as Erdogan did. Imamoglu has already proved that he is just as talented as Erdogan when it comes to retail politics, Patrick Keddie and Sevecen Tunc argue in FP, by running on his record as a youth soccer star and taking his campaign to the stadiums in a soccer-obsessed country. By using tactics that Erdogan once used while taking advantage of growing disillusionment with AKP rule, Imamoglu appears to be beating Erdogan at his own game—and his victory could prove to be crucial to defending Turkey’s democracy against Erdogan’s authoritarian tendencies.

U.S. announces new sanctions on Iran. The United States will announce new sanctions against Iran today, and global stocks are expected to fall. Tensions remain high between the two countries after Iran shot down a U.S. military drone last week, but U.S. Secretary of State Mike Pompeo said that the United States remains open to negotiations.

The new sanctions come ahead of a week of high-level diplomacy: Iran is likely to be discussed at the G-20 summit in Osaka, as well as at a meeting in Brussels between those involved in the 2015 nuclear deal.

Mexican migration enforcement ramps up. This week, two additional Mexican border cities will start taking in U.S.-bound asylum seekers as part of the deal agreed between the United States and Mexico earlier this month to avoid U.S. tariffs. Migrant detentions have already tripled in Mexico, and detainee advocates report that the immigration centers are overcrowded, unsanitary, and unsafe. Meanwhile, Mexican authorities are also cracking down on the country’s southern border, disrupting trade between Mexico and Guatemala.

Internet returns to Sudan? A Sudanese court has ordered an end to the country’s nationwide internet blackout, which has lasted for nearly three weeks—since security forces raided the main protest camp in Khartoum. The internet blackout, which is more severe than past restrictions imposed under ousted President Omar al-Bashir, may have already sparked wider discontent in Sudan. Protesters are still demanding a transition to civilian rule.

The U.S.-sponsored conference on Palestinian economic development begins in Bahrain. Over the weekend, the White House unveiled a $50 billion economic proposal—the first part of its Middle East peace plan—that has already drawn widespread criticism within the region. The Palestinian Authority will boycott the conference, and no Israeli officials from the current caretaker government are expected to attend. Some Palestinian business leaders will reportedly travel to Bahrain despite the PA boycott and an Israeli business delegation will participate. Despite these setbacks, the conference could still achieve something, the veteran U.S. diplomat Dennis Ross argues in FP, and it should not be dismissed.

Iran is expected to breach the enriched uranium limit set by the 2015 nuclear deal on Thursday, in the face of U.S. sanctions. The European Union will chair a high-level meeting on the agreement on Friday. Representatives from China, Britain, France, Germany, Russia, and Iran will attend. Iran said Sunday that its decision to step back from commitments under the deal was “irreversible.”

On Friday and Saturday, the G-20 leaders’ summit will be held in Osaka, Japan. U.S. President Donald Trump is expected to speak with Chinese President Xi Jinping on the sidelines—a meeting that could get trade negotiations between the countries back on track.

Ongoing protests in Georgia. Thousands of anti-government protesters gathered outside the country’s parliament building for the fourth straight day on Sunday, and over 240 people have been injured in clashes with police. The protests began after a Russian delegation appeared in parliament. But they are calling for broader change: The demonstrations reflect increasing cynicism about the ruling party and the country’s political elite, Amy Mackinnon reports.

Growing unrest in Honduras. For weeks, demonstrations have been building against Honduran President Juan Orlando Hernández over proposed education and health reforms in the country, which suffers from violence and economic instability. The president deployed military police on Friday amid reports of looting and roadblocks. The protests are likely to escalate ahead of the anniversary of the country’s 2009 coup later this week.

Myanmar’s data networks. Over the weekend, Myanmar ordered mobile phone companies to shut down their data networks in Rakhine and Chin states, where the military is cracking down on ethnic rebel groups. (The United Nations has accused Myanmar’s military of genocide in Rakhine.) Much of the conflict has played out on Facebook, which has failed to fully remove hate speech from its platform, Elise Thomas writes for FP.

Ukraine held its largest-ever gay pride parade in Kiev on Sunday—an event once marked by violent clashes between protesters and marchers. Ukrainian President Volodymyr Zelensky has promoted LGBT rights since taking office last month, and thousands of marchers were joined in the streets by politicians and foreign diplomats.

In Bangkok, ride-hailing apps are creating unfair competition and fueling a violent turf war between motorbike taxi drivers, the Guardian reports. Apps like Grab—launched in Malaysia—have taken off in the region in recent years, often undercutting local drivers. 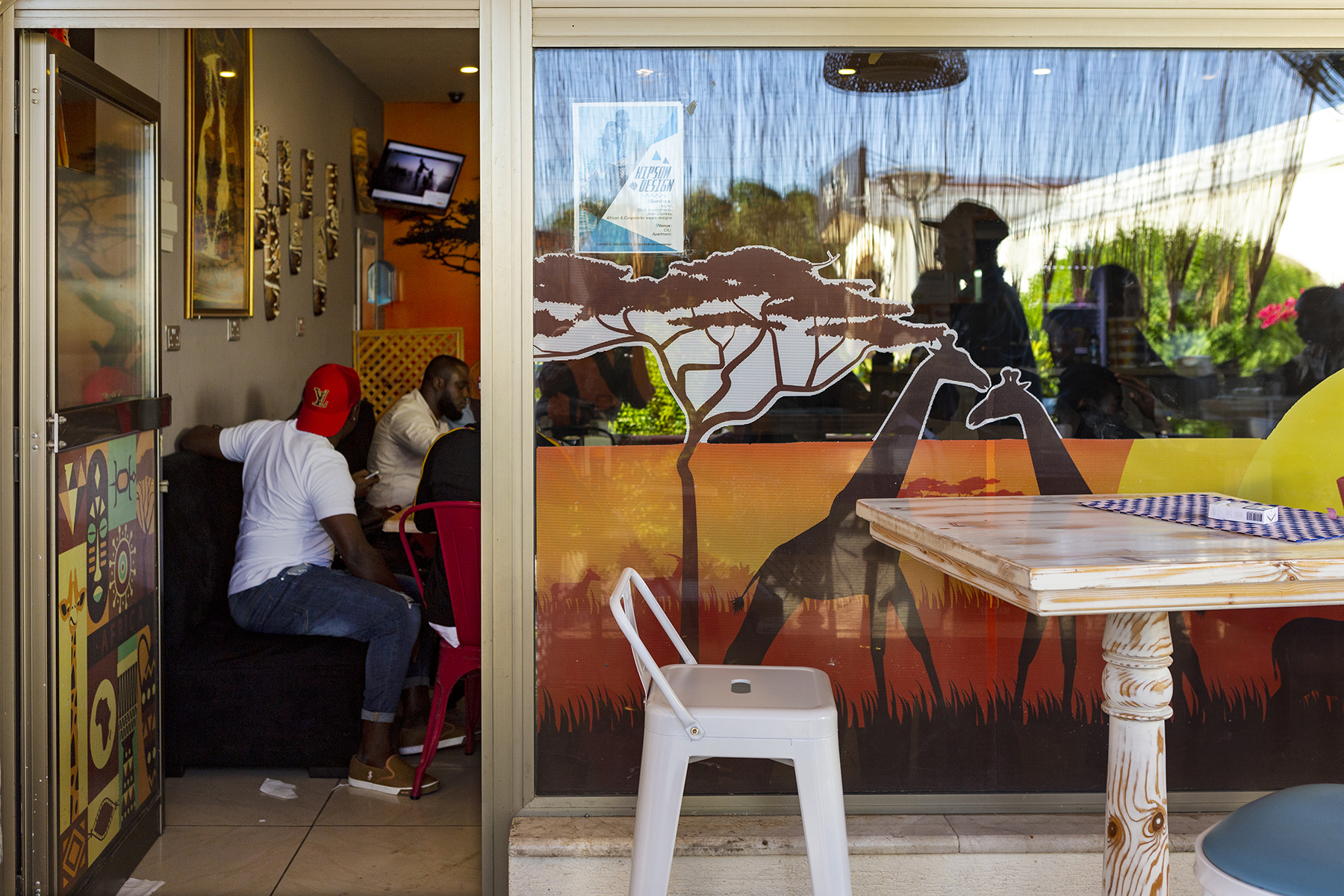 The African Gold restaurant outside North Nicosia serves as a meeting point for the large foreign student body from Nigeria, Cameroon, and Zimbabwe.MAREN WICKWIRE/MANIFEST MEDIA FOR FOREIGN POLICY

There are around 20,000 African students enrolled at international universities in the Turkish Republic of Northern Cyprus, which proclaims its independence but is only recognized by Ankara. Most of them are there seeking a future in the European Union—having been scammed by opportunistic agents, Chigozie Obioma reports for FP. “This hope that Northern Cyprus will serve as a gateway to more developed countries is the primary factor driving what many locals view as an ‘invasion’ of this tiny pariah nation by Africans youths,” he writes. “But the goal of moving on to Europe is rarely achieved by the students who come here.” Instead, he finds, many of them continue to “flock to an island where they are unwanted, maligned, and sometimes destroyed.”