Will China and the U.S. Resume Talks?

U.S. President Donald Trump and Chinese President Xi Jinping will speak on the sidelines of the G-20 summit in Japan later this week, with hopes of reviving trade negotiations. There is a lot at stake: The two leaders haven’t met since early last month, when talks broke down in Washington as the trade war between the countries escalated.

But expectations for the meeting currently remain low, as resuming talks appears to be the best-case scenario. Both Trump and Xi are facing serious domestic pressure to back down on the trade war, but the United States isn’t likely to dial down its tariffs or its threats. Trump has warned of more tariffs that would reach nearly all Chinese imports. Observers say that if he follows through, China won’t come back to the negotiating table.

Before the meeting. Ahead of the G-20 summit, negotiators on both sides are already paving the way for the United States and China to resume the talks. Chinese Vice Premier Liu He has spoken with his counterparts, U.S. Trade Representative Robert Lighthizer and U.S. Treasury Secretary Steven Mnuchin.

Feeling the effects. The United States has imposed 25 percent tariffs on $250 billion worth of Chinese goods, and the threatened tariffs would target consumer goods like cellphones, computers, and clothes. Chinese retail sales growth is already slowing down, and the increasing stress of the U.S. ban on Chinese telecoms firm Huawei has put more pressure on Xi to reach an agreement.

Even if the two leaders manage to strike a deal, the tariffs have already had major effects. The trade war marks a “history-altering moment,” Michael Schuman writes in the Atlantic. “With that partnership between the U.S. and China anything but assured, businesses are redrawing the map of global production.”

What will they talk about? U.S. officials say a trade deal won’t be reached in Japan. But Trump and Xi could talk about Huawei, which the U.S. president might be willing to include in a deal. For that, there’s a time limit: A temporary license that allows Huawei limited transactions with U.S. companies runs out in August.

U.S. and Iran spar—again. Mark Esper, the new acting U.S. Secretary of Defense, is turning to Europe for help to avoid escalating a conflict with Iran. At a meeting of NATO defense ministers on Wednesday, he said he was seeking a multilateral strategy. But there are still no signs that Iran wants to talk: Its leadership said Tuesday that new U.S. sanctions targeting government officials were “closing the doors of diplomacy” between the countries. U.S. President Donald Trump could pursue even more sanctions. Iran will surpass the limit on enriched uranium under the 2015 nuclear deal on Thursday.

Hong Kong activists eye G-20 summit. Hong Kong protesters planned a silent march to foreign consulates today to get the attention of world leaders ahead of this week’s G-20 summit. Activists have also taken out newspaper ads in a bid to put the city’s extradition bill on the meeting agenda. They’ve had some results: Britain banned sales of tear gas to Hong Kong’s government after the violent clashes between police and protesters, who are still demanding that the proposed—and now postponed—law be thrown out completely.

Egypt arrests key opposition figure. Egypt has detained the opposition leader Zyad Elelaimy and seven others, accusing them of a plot against the government. Elelaimy was a key figure in Egypt’s 2011 uprising, and President Abdel Fattah al-Sisi has cracked down on thousands of Islamist and liberal opponents during his five years in power. Elelaimy’s allies said the arrests were intended to keep them out of parliamentary elections next year.

Lula’s appeal in Brazil. Brazil’s Supreme Court has delayed the appeal of former President Luiz Inácio Lula da Silva until August and rejected a request to free him from prison until the verdict is reached. His lawyers have new evidence: Leaked messages published in the Intercept suggest that Sérgio Moro, the judge who convicted him in a far-reaching investigation—and who is now Brazil’s justice minister—may not have acted impartially. Lula is currently serving 25 years in jail on two convictions.

Russia’s Council of Europe vote. The Council of Europe—the main European human rights forum—restored Russia’s voting rights on Tuesday, reversing a decision made after Russia annexed Crimea in 2014. The country had threatened to leave if its vote wasn’t restored. The move gives Russia a diplomatic boost, and it caused the Ukrainian delegation to walk out in protest. The European Union still opposes Russia’s annexation of Crimea.

China’s hidden navy. China downplays the role of its official maritime militia, but it is increasingly taking part in Chinese assertion of claims in the South China Sea. Hundreds of fishing vessels anchor around the Spratly Islands—often intent on hiding their identities and movements, Gregory Poling writes for FP.

Online hate speech cases. In a global first, Facebook will give courts the identities of French users accused of illegal hate speech on the platform. The deal came out of meetings between Facebook and the French government, which is mulling laws that would slap tech companies with hefty fines if they don’t do enough to combat hate speech.

Italy’s Nigerian mafia. An organized crime group is gaining strength across Italy—and this one is not homegrown. The Nigerian mafia that smuggles drugs and migrants across the Mediterranean, often recruiting at asylum centers, has a presence from the Piedmont to Palermo. Anti-immigration politicians like Matteo Salvini see the foreign crime group’s presence as a justification for their strict border policies. For the far-right’s opponents, it presents a political conundrum, the Washington Post reports.

Europe is bracing for a record-setting early summer heat wave that is expected to peak between today and Friday, with temperatures reaching 105°F (40°C) in several countries, including France, Italy, and Spain. Temperatures are at least 20 to 30 degrees Fahrenheit above average. Early heat waves are particularly dangerous: A June 2003 heat wave in Europe contributed to an estimated 70,000 deaths. France’s health minister warned that such weather events could become the norm.

Brown seaweed is plaguing Mexico’s Caribbean coastline this year, covering white beaches and alarming tourists. Researchers attribute the overgrowth to climate change. The state of Quintana Roo declared an emergency over the seaweed, which President Andrés Manuel López Obrador has dismissed as a “minor issue.”

In a landmark decision, a court has ruled that France did not do enough to prevent unhealthy air pollution in Paris, which has grappled with high levels of smog for years. The case, brought by two individuals, was the first of its kind and sets a precedent for future pollution victims.

The city historian’s office in Havana has embarked on a large restoration effort ahead of 500th anniversary of the capital’s founding. The city hopes to recover neglected or forgotten sites, including Cuba’s oldest Jewish cemetery. 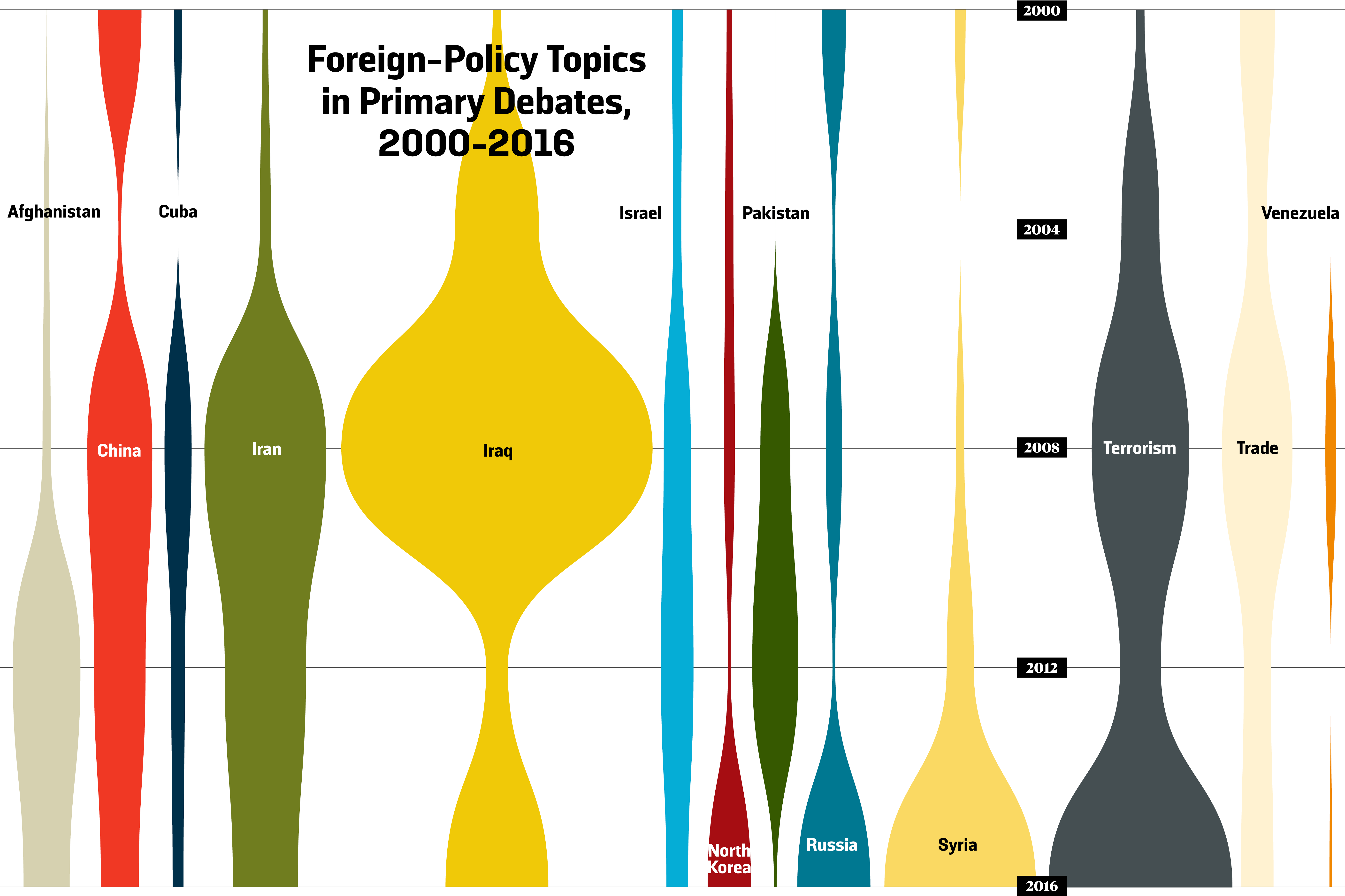 The first round of the 2020 Democratic primary debates starts today in Miami. Foreign Policy reviewed primary debate transcripts and tracked each of the foreign-policy questions asked in the last 20 years, with popular topics displayed above. China and trade were the most frequently discussed in 2000 and remained prominent into the 2016 race. Given the ongoing trade war between the United States and China, both topics will undoubtedly resurface in 2020.