Plus: North Korea and the U.S. talk about a third summit, political maneuvering heats up in Israel, and the other stories we’re following today.

Here is today’s Foreign Policy brief: Iran prepares to breach the nuclear deal, the prospect of a third U.S.-North Korea summit grows, and political maneuvering heats up in Israel.

Iran is expected to surpass a limit on low-enriched uranium stockpiles set by the 2015 nuclear deal by Friday, marking the first breach of the accord and increasing pressure on its European participants. The move is intended to push Britain, France, and Germany to increase trade with Iran despite U.S. sanctions. The European Union says there is no alternative to the agreement.

The European Union hosts a meeting between representatives from all remaining signatories to the deal on Friday. Iran has already warned that it will commit a larger violation on July 7, likely passing the 3.67 percent limit on uranium enrichment or resuming the development of a heavy water reactor.

Will it boost Iran’s nuclear program? Breaching the stockpile limit is more important politically than it is for Iran’s nuclear program, Jarrett Blanc, a senior fellow at the Carnegie Endowment for International Peace who worked on the nuclear deal, known as the JCPOA, wrote in an email. “Being a few kilograms over … does not teach Iran anything new or appreciably reduce its so-called ‘breakout time’—the time necessary to produce enough fissile material for a single nuclear weapon,” he said.

But a second breach of the deal on July 7 could. “If Iran continues to violate the JCPOA, though, for example by stockpiling more material or increasing the percentage level of enrichment, it will slowly whittle the breakout time down from the current one year, or more. This would destroy the non-proliferation accomplishment of the JCPOA,” Blanc wrote.

Does this signal the end of the deal? At the meeting on Friday, European leaders will seek to save the deal, but it appears to be in trouble. In a bid to persuade Iran not to breach it, they could announce a credit line to ease trade as early as today. “It is clear that the remaining [JCPOA] participants cannot deliver on Iran’s original expectations in the face of U.S. sanctions, but they may be able buffer the worst economic consequences of the sanctions,” according to Blanc.

Blanc also notes that almost all of the U.S. Democratic primary candidates support a return to the deal if Iran does remain in compliance. “There is still a way out of the box,” he wrote.

U.S. and North Korea could resume talks. The United States and North Korea are engaged in behind-the-scenes discussions regarding a third nuclear summit between their two leaders, according to South Korean President Moon Jae-in. The second meeting between U.S. President Donald Trump and North Korean leader Kim Jong Un collapsed in Hanoi in February over the issue of sanctions relief, and North Korea continues to speak out against U.S. sanctions. Trump will visit South Korea this weekend after the G-20 meeting.

Possible truce in U.S.-China trade war. According to the South China Morning Post, Washington and Beijing have reached a tentative deal for a truce in the trade war and both governments are expected to issue press releases before Chinese President Xi Jinping and U.S. President Donald Trump meet at this weekend’s G-20 summit in Japan. Such an agreement would halt the expected next wave of U.S. tariffs on $300 billion worth of Chinese imports.

Indonesia braces for protests as court rules on election. Indonesia’s Constitutional Court will rule today on a challenge from the opposition over the result of April’s presidential election, which incumbent President Joko Widodo won by double digits. His opponent, Prabowo Subianto, has accused him of rigging the election and has so far refused to concede. Protests broke out after the official result was announced last month, and the government has braced for more unrest: It has deployed more than 47,000 security forces.

Tensions run high in Georgia as protests continue. Anti-government protests have continued for nearly a week outside Georgia’s parliament, which hosted a Russian delegation last week—drawing the ire of demonstrators. Many Georgians resent Russia for annexing two separatist territories in 2008 and believes it wields influence over the current government. On Wednesday, the parliament voted to remove an opposition lawmaker’s immunity, meaning he could be prosecuted for inciting disorder at a demonstration last week.

Afghanistan’s president visits Pakistan. Today, Afghan President Ashraf Ghani meets Pakistani Prime Minister Imran Khan in Pakistan to discuss Afghanistan’s ongoing peace talks. Ghani’s government—kept out of negotiations by the Taliban—maintains caution toward Pakistan, which it has accused of supporting the insurgents. During an unannounced visit to Kabul earlier this week, U.S. Secretary of State Mike Pompeo said he hopes for a peace deal by September.

U.S. Democratic primary debates. The first round of the Democratic presidential primary debates continues tonight in Miami—but foreign policy has remained low on the agenda. The lack of foreign-policy discussion is one of the most striking things about the 2020 campaign so far, writes Jonathan Tepperman, FP’s editor in chief.

Political maneuvering in Israel. After failing to form a governing coalition and successfully encouraging the Knesset to dissolve, Prime Minister Benjamin Netanyahu’s Likud Party is now reportedly trying to reverse course and cancel the dissolution of parliament and the new elections it prompted. On Wednesday, Knesset speaker Yuli Edelstein claimed there is a legal mechanism to avoid the repeat elections scheduled for September by reinstating the recently dissolved Knesset and forming a national unity government—presumably with the Blue and White Party, which finished second in the April general election. (Legal experts are not convinced.)

Blue and White’s leader, Benny Gantz, dismissed the move as spin while others viewed it as a way for Netanyahu to evade corruption charges and avoid going into an election with poor polling numbers, while shifting the blame for new elections—given that the public appears to prefer a national unity government—by putting pressure on Gantz.

Meanwhile, former Prime Minister and Defense Minister Ehud Barak announced his return to politics and his intention to run in the September election (if it happens), declaring that “The future of the Zionist movement is on the line here,” denouncing the current government’s “corrupt and messianic elements,” and urging Netanyahu to resign. Some Israeli analysts argue that Barak, not Gantz, is the only ex-general who can defeat Netanyahu.

Refugees in Libya. Europe has seen a steep drop in the number of African migrants, just as the United States stops a record number at its southern border. The trends are related to the EU policy that has made Libya the main processing center for refugees in North Africa. Stuck in Libya, migrants are increasingly opting for the route through South America to the United States, Priyali Sur writes for FP.

An ICC investigation in Myanmar. The International Criminal Court’s prosecutor, Fatou Bensouda, has requested permission to investigate alleged atrocities against the Rohingya Muslim minority. She would be the first to international prosecutor do so. To fit within ICC jurisdiction, the crimes must include forced migration to Bangladesh—which is a member of the ICC, while Myanmar is not.

Restrictions on U.S. foreign aid. The administration of U.S. President Donald Trump’s crackdown on human trafficking has quietly held up funding for aid programs for the last six months. The funds could have been used to combat the new Ebola outbreak or demining projects in former war zones, Robbie Gramer reports.

Chinese coal projects. A court in Kenya has stopped a Chinese-backed plan to build the country’s first coal-fired power plant near the town of Lamu, a UNESCO Heritage site. It requested a new environmental assessment: Activists say the plant would increase Kenya’s carbon emissions by 700 percent. China has invested in 200 coal projects in 34 countries, posing a threat to communities, Dana Ullman reports for FP.

The Japanese film Spirited Away is leading the box office in China—18 years after its official release. While many Chinese people grew up watching the Studio Ghibli animation on DVD or download, it hasn’t been shown in cinemas until now. China has a quota on the number of foreign films released in its theaters.

Overflowing trash in the streets of Rome is posing a major health hazard in the summer heat, doctors say. Residents say the garbage emergency has grown under Mayor Virginia Raggi of the populist Five Star Movement. Trash problems have long plagued Rome, which lost its major landfill in 2013.

Graphic: An Insurgent Candidate in Taiwan 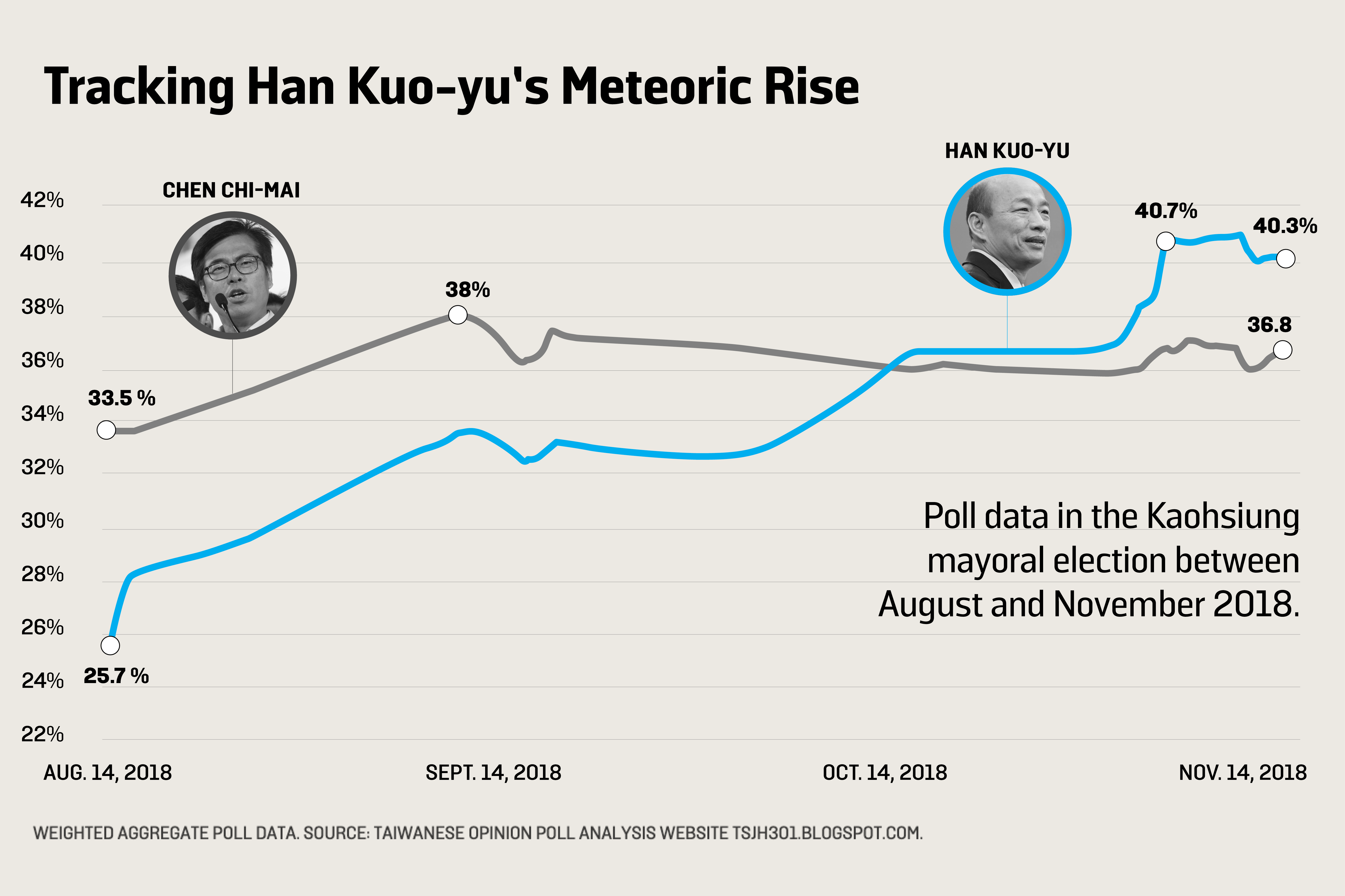 Kaohsiung Mayor Han Kuo-yu was largely unknown just four months before the election last year, but he ascended the polls and delivered a landslide defeat to the ruling party’s candidate. Han’s rise has had a little help from a campaign of social media manipulation seemingly orchestrated by a professional cybergroup from China, Paul Huang reports for FP. Barely six months into office, Han is already eyeing a run for the Taiwanese presidency in 2020.

In the New York Review of Books, Howard French offers a fascinating account of some of Africa’s little-known civilizations—often overlooked and (incorrectly) thought of as detached from Western history. Among the topics reviewed: A 14th century Malian ruler who sent expeditions to the farthest reaches of the Atlantic Ocean; sophisticated diplomacy between kingdoms in West Africa in from the 14th through 16th centuries; and how some kingdoms defended themselves from European colonizers. Robbie Gramer, staff writer