Economists and government officials generally think of poverty as a chronic, binary phenomenon: People are either poor or they are not. But reality is not so simple. Worldwide, 300 million people live nominally above the poverty line but regularly go hungry for some portion of the year. This seasonal deprivation is related to the agricultural crop cycle. The period between planting and harvest is a so-called lean season during which prices of staples rise and job opportunities become scarce for landless agricultural workers.

This period is predictable in timing and geography. Colloquially known as the “hunger season” in many parts of Africa, it is called njala in Malawi, musim paceklik in Indonesia, and monga in Bangladesh. And its impact is extremely widespread, given that 80 percent of the world’s poor still depend on agriculture for their livelihoods. In some places, the only solution is to migrate temporarily in search of work in cities; in others, the rural poor need cash to buy food while breadwinners are away or seasonal loans to increase the productivity of their land.

Researchers have found that during Kenya’s hunger season, grain prices in the country’s major markets regularly rise by 25-40 percent and often more than 50 percent in more isolated areas. Seasonal hunger isn’t a problem only in Africa. In 2016, my colleagues and I collected large-sample data in rural northern Bangladesh and learned that up to 60 percent of households regularly miss meals or restrict portion sizes during the lean period. Such drops have damaging consequences for children’s physical and cognitive development. Children who are regularly undernourished for parts of the year are more likely to be stunted and unproductive later in life.

The frequency with which households restrict portion size or number of meals in a given month (August 2015 to July 2016). 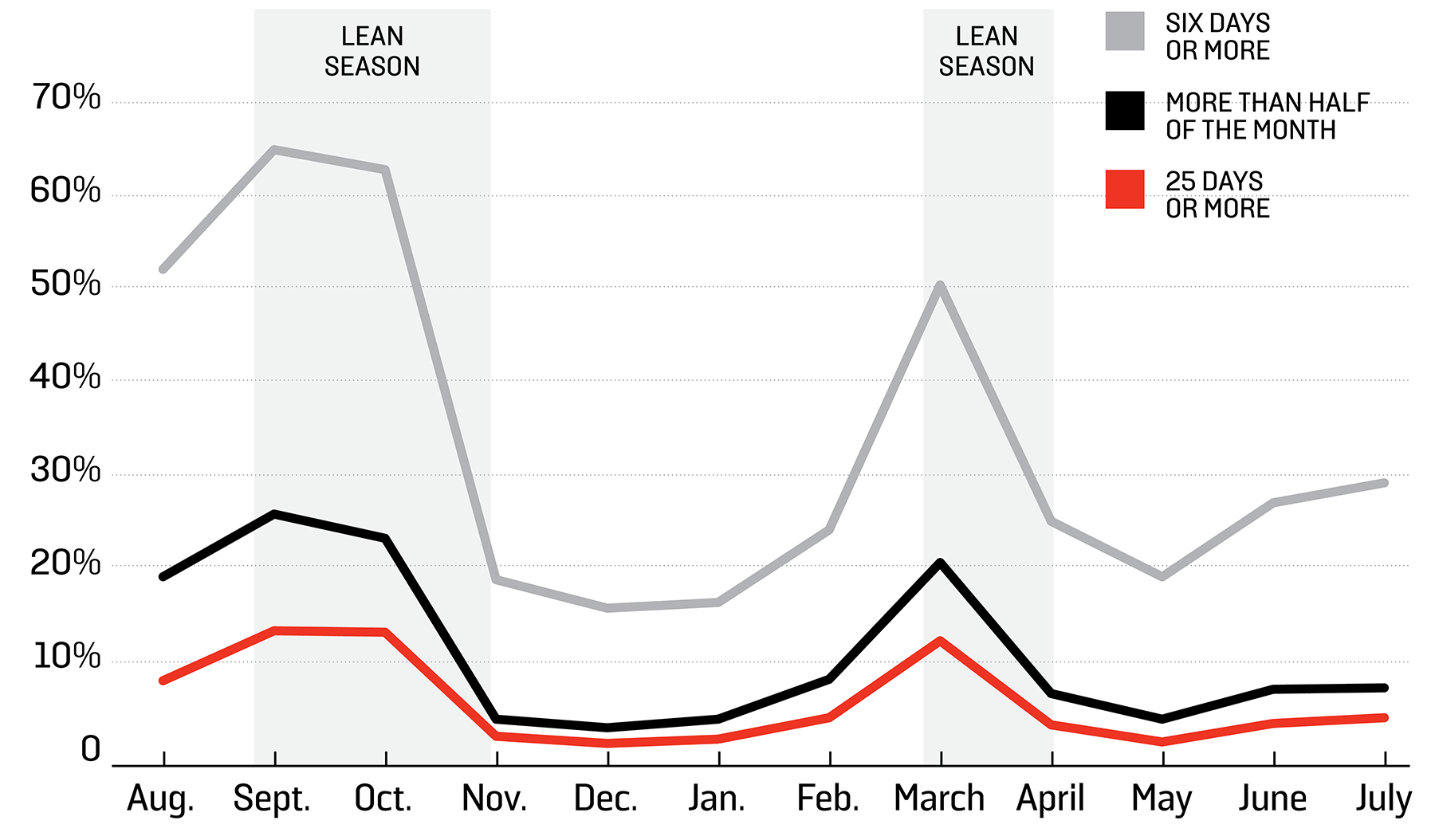 Seasonal food insecurity is among the biggest challenges to global poverty reduction—but it has remained largely under the radar. Understanding the phenomenon requires tracking the same people across seasons within the year, which is difficult and expensive. Yet with climate change, seasonal deprivation could get worse, as lean seasons grow longer, more frequent, and more severe.

Policymakers seeking to reduce and eliminate poverty therefore need to find ways to address seasonal deprivation. A number of governments have already tried to do so, by introducing food-for-work programs. In Africa, 39 countries currently have government-supported public works programs; India’s National Rural Employment Guarantee Act is another well-known example. However, creating nonagricultural jobs in an economy that is temporarily stalled as farmers wait for crops to grow can be complicated and expensive. Indeed, a rigorous evaluation of the national public works program in Malawi found disappointing results: Even when the food-for-work initiative was targeted to the poor during the lean season, there was no improvement in food security. Nongovernmental organizations can extend microcredit, but many such credit contracts impose biweekly repayment requirements—even though seasonal hunger can last up to three months.

My colleagues and I have experimented with a different approach: Instead of forcing job creation where people are, why not move people to where the jobs are? Even during lean seasons, when employment opportunities dry up in rural areas, many low-skill jobs in nearby urban areas remain available. Some seasonally impoverished rural residents in Bangladesh already move to cities to work at construction sites or to pull rickshaws. A program we introduced in northern Bangladesh in 2007 offered round-trip transport subsidies to poor households to enable one member to temporarily move to nearby cities like Dhaka, Bogra, or Munshiganj in search of work. We then measured the effects of this program through a series of randomized controlled trials.

The original trial found that the program increased the number of people migrating and that this increase raised the amount of calories consumed by the families of such migrants by 550-700 calories per person per day. During subsequent lean seasons, many of the initial migrants chose to move again—at their own expense—especially if they’d formed a connection to an employer in the city.

Between 2011 and 2017, while incrementally scaling up the subsidy program, we continued to collect data to study the unintended consequences of migration on family relationships and happiness—and to look for broader changes in the rural economy. The second set of results in 2014-2015 looked even stronger, as it became easier for people to travel together when many friends and neighbors received transport subsidies simultaneously. However, new complexities arose as the program grew. The organization offering the subsidies targeted the wrong set of people—those who didn’t need external support and who would have likely migrated on their own. In the future, governments and NGOs will have to innovate to ensure the subsidies are targeted appropriately.

Migration subsidies are working in Bangladesh because the poorest households seem otherwise unable to take advantage of profitable but risky opportunities to move for jobs. The risk of failing to find a job in the city after using one’s meager savings to finance the trip can be overwhelming, especially when a family is living close to subsistence levels.

The research therefore offers guidance on the types of places where seasonal migration subsidies are most likely to succeed. It makes the most sense to target areas where people affected by seasonal deprivation are at least four to five hours’ drive away from cities, making experimenting with migration risky. And internal migration is a sensible strategy only if there are cities in the country that offer employment opportunities.

Such conditions are not universal. For example, while seasonal hunger is very commonplace in countries such as Malawi, a seasonal migration program is unlikely to be effective there because Malawi suffers high level of urban unemployment. Without vibrant urban informal day-labor markets like those common in South Asia and Southeast Asia, seasonal migration support is unlikely to improve the livelihoods of the rural poor during lean seasons.

Nepal seemed to offer a more promising environment for replicating the Bangladesh program. This is partly because Nepalis can freely cross the border with India, where wages are generally much higher. This inspired us to conduct similar exploratory field research in Nepal over the past year. What we found surprised us: More than 80 percent of poor households in rural Nepal already send a seasonal migrant to a city.

Nepal may satisfy all the criteria for a seasonal support program, but people are already implementing the solution for themselves. The program was helpful in Bangladesh because there was a poverty trap. Without the external support, people found it too risky to take advantage of profitable migration opportunities. Households in rural Nepal appear to have broken out of the trap already, negating the need for this particular form of external support.

What Nepalis need is not bus tickets but seasonally timed loans to pay for food so they don’t resort to taking out extortionate ones.

That indigenous Nepali solution leads to a related problem that a different seasonal intervention could address: Family members of migrants who remain behind were still suffering from seasonal poverty and taking out loans during the hungry season. Due to the difficulty of remitting money from India to Nepal, family members do not realize the full benefits of the migration income until after the migrant returns home. In Bangladesh, domestic migrants can travel back and forth more frequently to bring money home or send it via mobile transfers. What Nepalis need is not bus tickets but seasonally-timed loans to pay for food so they don’t resort to taking out extortionate ones.

This new idea is related to an innovative program tested in Zambia that offers food loans to rural agricultural households during the lean season. The underlying structure of the problem in Zambia is different from Nepal: Poor households desperate for money and food during the hungry season work on other people’s farms during those months, neglecting their own plots of land in the process. This pattern greatly reduces productivity on their own plots. The study found that when seasonal loans were offered, overall village output rose by 8 percent.

Seasonal loans can also prevent lean-season poverty if they are offered immediately after the harvest. A study in Kenya found that poor farmers sold their crops at harvest when the price was low (and when they tended to be desperate for cash) and then bought it back in the lean season when the price was high. Farmers who were offered loans at harvest sold less grain when the market price was low, reducing the seasonal fluctuation in grain prices.

Seasonal deprivation isn’t a local or temporary problem; widespread malnourishment and stunted growth will have long-term consequences for productivity and economic growth in poor countries. Donors and policymakers must therefore pay far more attention to this problem before climate change makes it worse. The old solution of public works projects won’t be enough; governments and donors must instead experiment with a variety of policies and tailor solutions to the local context.

Subsidies for seasonal migration may be a promising approach in places like northern Nigeria and Ghana, where the rural poor have access to vibrant urban labor markets within their borders. Seasonal consumption loans, meanwhile, may be more helpful in poorer countries in central and southern Africa without such high-growth areas. And providing post-harvest loans or improving grain storage facilities would be the most sensible policy option in countries where seasonal deprivation largely derives from markets distorted by seasonal volatility in food prices.

Incentivizing workers to move or giving them seasonally timed loans, the evidence suggests, is far more effective than attempts to force job creation in rural areas. Encouraging this sort of seasonal arbitrage could prevent malnutrition from wreaking havoc on the next generation and harming the future economic prospects of developing countries.

Ahmed Mushfiq Mobarak is an economics professor at Yale University, where he directs the Yale Research Initiative on Innovation and Scale. Twitter: @mushfiq_econ

How Alberta Won the Rat Race

One Canadian province has virtually eliminated its vermin—and shows how others can too.

A Jury of Peers

How Ireland used a Citizens’ Assembly to solve some of its toughest problems.