A newly translated novel portrays the European Union’s search for meaning as a historical reckoning—and a comedy of manners.

What exactly is the European Union? A post-national superstate or a mechanism to augment the power of nations? A neoliberal fantasia or a protectionist cartel? A Christian empire? A socially liberal paradise? Or is it something defined not by what it is but by what it is not—the lack of war in Europe, the taming of extremist ideologies, the avoidance of another Auschwitz? And what if nobody in the EU, including the people who work in its institutions, even knows the answer?

Such questions have riven the EU since it first came into existence, but in recent years, the latent tensions have risen to a breaking point. Now the Austrian writer Robert Menasse has dramatized Europe’s existential agonies in his splendid novel, The Capital, which won the 2017 German Book Prize, one of Germany’s most prestigious literary awards, and was recently translated into English. The book should do more than any treatise or treaty to help readers understand the union’s crises.

Menasse spent four years living in Brussels to research his subject, and it shows. The novel abounds with delicious observations about the European Commission, the bureaucratic behemoth that ensures the functioning of the EU. In a series of satirical scenes, Menasse explains which of the commission’s directorates have status (trade) and which do not (culture); how bureaucrats scheme, sleep with one another, and undermine each other to gain promotion for themselves; the dynamics between the nationalities (playful, subtle Italians and Hungarians, for example, gang up on direct and moralizing Swedes). If nothing else, The Capital serves as a fun primer on how Brussels works. 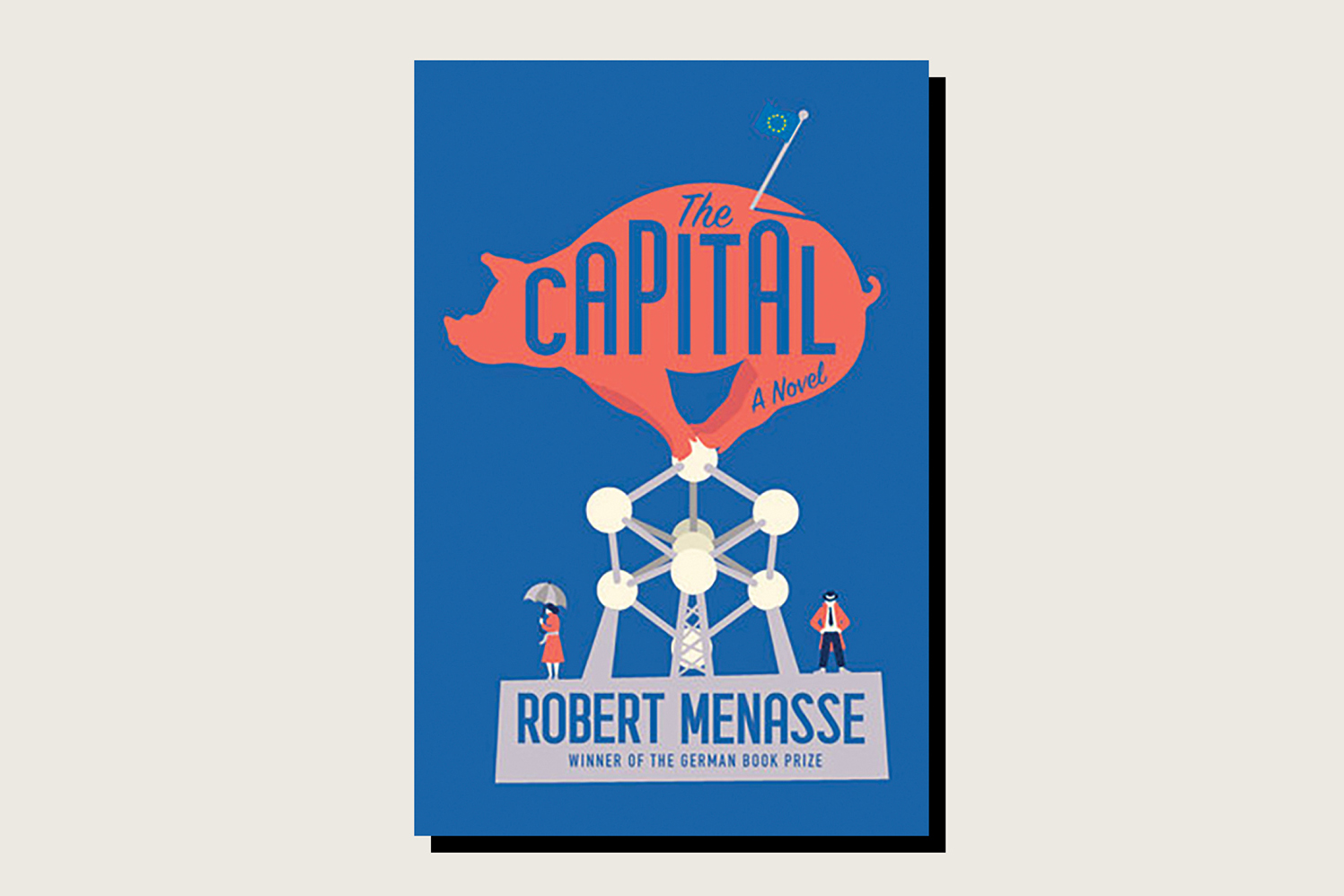 But beneath the comedy of manners, Menasse has a serious point to make: On top of its perpetual crisis, the EU must confront the political demands of the moment—above all, a loss of historical purpose and a resurgence of political extremism. The way Europe meets this challenge—through bureaucracy and idealism, vanity and necessity—provides the core of Menasse’s story and his critique.

The book’s plot circles around the European Commission’s jubilee celebrations. Shocked to discover that the European public dislikes the commission, which it often views (in real life as in the novel) as simultaneously aloof and bullying, bureaucrats set to work trying to improve the commission’s image.

Martin Susman, a midranking nobody in the Directorate-General of Culture, comes up with the idea of parading Auschwitz survivors at a mass commemorative event in the heart of Brussels. After all, Susman argues, the commission needs to show that it is the institution that safeguards the promise of “never again.” As he tells a colleague, “the Commission is a supranational rather than international institution, which means it doesn’t mediate between nations but stands above them and represents the common interests of the Union and its citizens.” Invoking Jean Monnet, a founding father of the EU, Susman argues passionately that the purpose of the commission is “to overcome nationalism, and ultimately the nations.”

Susman’s plans are eventually subverted by a slick senior official, the private secretary to the commission’s president, who asks the representatives of the EU’s collected nation-states how they feel about a jubilee celebration that, as he rewords Susman’s idea, urges the overthrow of the nation-state. Unsurprisingly, they are not thrilled. The smaller nations, many of which joined the EU to guarantee their independence after centuries of invasions and occupations, are the first to push back against an idea that seems to question their identity and right to exist.

This storyline cuts to an unresolved tension at the core of the EU—between the post-nationalism Susman espouses and the EU’s other job, which is to safeguard nations’ more parochial interests. Both impulses have defined the union from the beginning. As the historian and sociologist Perry Anderson has shown in his essays about the history of the union, the impetus for the EU’s creation was not just to create a “United States of Europe,” in Winston Churchill’s words, but to strengthen the states themselves after the devastation of World War II. More specifically, this meant helping Germany to rehabilitate its reputation and France to reclaim international status. Today, countries such as Ukraine and Georgia seek EU membership partly to escape neocolonial domination by Moscow.

At its best, the EU manages to embrace this paradox: It is at once a supranational structure that strengthens nations and a community of strengthened nations that have learned to work together through a common structure. When both parts work, the EU defies the binaries pushed by the likes of Steve Bannon in the United States and some advocates for Brexit in the United Kingdom. It is simultaneously globalist and nationalist.

This is something I experienced for myself when, as a teenager, I attended one of the dozen or so European Schools, which were created by the founders of the European Union to foster a sort of Homo Europaeus. The schools were meant originally for the children of European bureaucrats but also became popular among journalist and expat parents such as my own. Students were divided into language sections, where we were taught most subjects in our mother tongue, but we also studied history and geography in a foreign language and from that country’s perspective (so French kids would learn history and geography in German and from a German point of view, English from a French one, and so on).

“Educated side by side,” went the schools’ mission statement (allegedly written by Monnet), “untroubled from infancy by divisive prejudices, acquainted with all that is great and good in the different cultures, it will be borne in upon them as they mature that they belong together. Without ceasing to look to their own lands with love and pride, they will become in mind Europeans, schooled and ready to complete and consolidate the work of their fathers before them, to bring into being a united and thriving Europe.”

“European,” however, was never imposed as an identity onto pupils. We didn’t sing the European hymn in the morning or salute the European flag. “Being in mind European” meant the ability to see things from another country’s point of view, to wear one’s own national identity more lightly. It was a way of thinking, rather than a sealed idea of the self, an initiation into the tradition that holds the EU together: its almost religious reverence for patient negotiation and the cult of compromise. This deification of negotiation and compromise is expressed in the union’s famously bureaucratic procedures, its love of norms and baroque protocol.

As long as this way of doing politics was infused with the memory of the devastation that preceded the founding of the union, it had a raison d’être. Better the language of labyrinthine bureaucracy than hate speech; better to jaw-jaw than war-war.

Whereas people used to talk of “solving a problem,” now they said: “bringing a solution to the problem.” Whereas it used to be “making a decision,” now it was “effecting a decision.” … Arrangements that once were “made” were now facilitated.” … [T]his development was a sign, had a significance that was symptomatic of the state of the Commission, of its helplessness, its paralysis.

Menasse is unforgiving in his criticism of EU-connected think tanks, which churn out circular homilies about how economic growth is necessary to maintain economic growth and can be guaranteed through economic growth—even as the austerity policies of the commission drive up suicide numbers across the continent. His characters become ever more symbolic. The bureaucrat career climber unable to have feelings in her private life becomes emblematic of a system that has lost its soul; when Susman nurses his cynical businessman brother back to health, his actions seem to represent how “culture” could help revitalize the empty political ideals of “trade.” Meanwhile, the novel shows how the EU has become too divided to stand up to emerging threats. In one storyline, different departments disagree and undercut each other on the issue of trading pork with China: Should the EU’s policy be based on defending the businesses of all European farmers or just those looking to export to the East?

As the union loses the memories that gave it meaning, one can see the return of the extremist mindsets the EU was created to overcome. In one poignant scene, a Czech bureaucrat goes home to Prague to be told by his new brother-in-law, a gangster who has joined a rising neofascist party, that he is a national traitor for working in the commission. Terrorists and religious fundamentalists stalk the fringes of the novel: A terrorist attack kills a Holocaust survivor whom Susman planned to include in his jubilee.

In this world where “people forget so much and yet talk so much,” those who want to return the EU to its conscience become increasingly hysterical. In a tragicomic moment, an aging academic uses a speech at a think tank to raise the idea of moving the capital of the EU to Auschwitz, as a permanent reminder of the backdrop to its creation. The suggestion is meant as an intellectual provocation, but by the end of the book, it feels almost like the only act that could save the commission.

The problem with trying to create a sense of purpose out of the negative of “never again” is that, however hard one tries, that negative will invariably lose its power over time. Menasse’s novel is mercilessly unsentimental. It offers little hope that past purpose can be recovered. If it is to flourish, the author suggests, the EU will have to find a new point for its existence. It must answer not just what it is but why.

Peter Pomerantsev is a visiting senior fellow at the Institute of Global Affairs at the London School of Economics. Twitter: @peterpomeranzev