Who Will Win the Self-Driving Future?

China and the United States have drastically different visions for autonomous transportation.

For Americans, cars are a way of life. They not only take people from one place to another; they also serve as entertainment systems, storage lockers, and status symbols. But thanks to ride-hailing services, personal cars are becoming less important, and the development of autonomous vehicles may accelerate that trend. Cutting out the driver could make ride-hailing so cheap, convenient, and safe that many Americans may go carless.

Will Americans really give up their cars? The transportation consultants Bern Grush and John Niles think they will. In The End of Driving: Transportation Systems and Public Policy Planning for Autonomous Vehicles, they reckon that, 50 years from now, only hobbyists will drive cars. Between then and now, however, officials will have to do the complicated work of promoting a “transit leap” by deploying “fully automated shuttle vehicles”—that is, buses that don’t require any human input—along limited routes and nudging people toward giving up their own cars. The task is the same for former New York City Traffic Commissioner Samuel I. Schwartz in No One at the Wheel: Driverless Cars and the Road of the Future, who sees a future in which autonomous vehicles drastically change the physical look and feel of U.S. cities, widening sidewalks, narrowing roads, and eliminating parking. 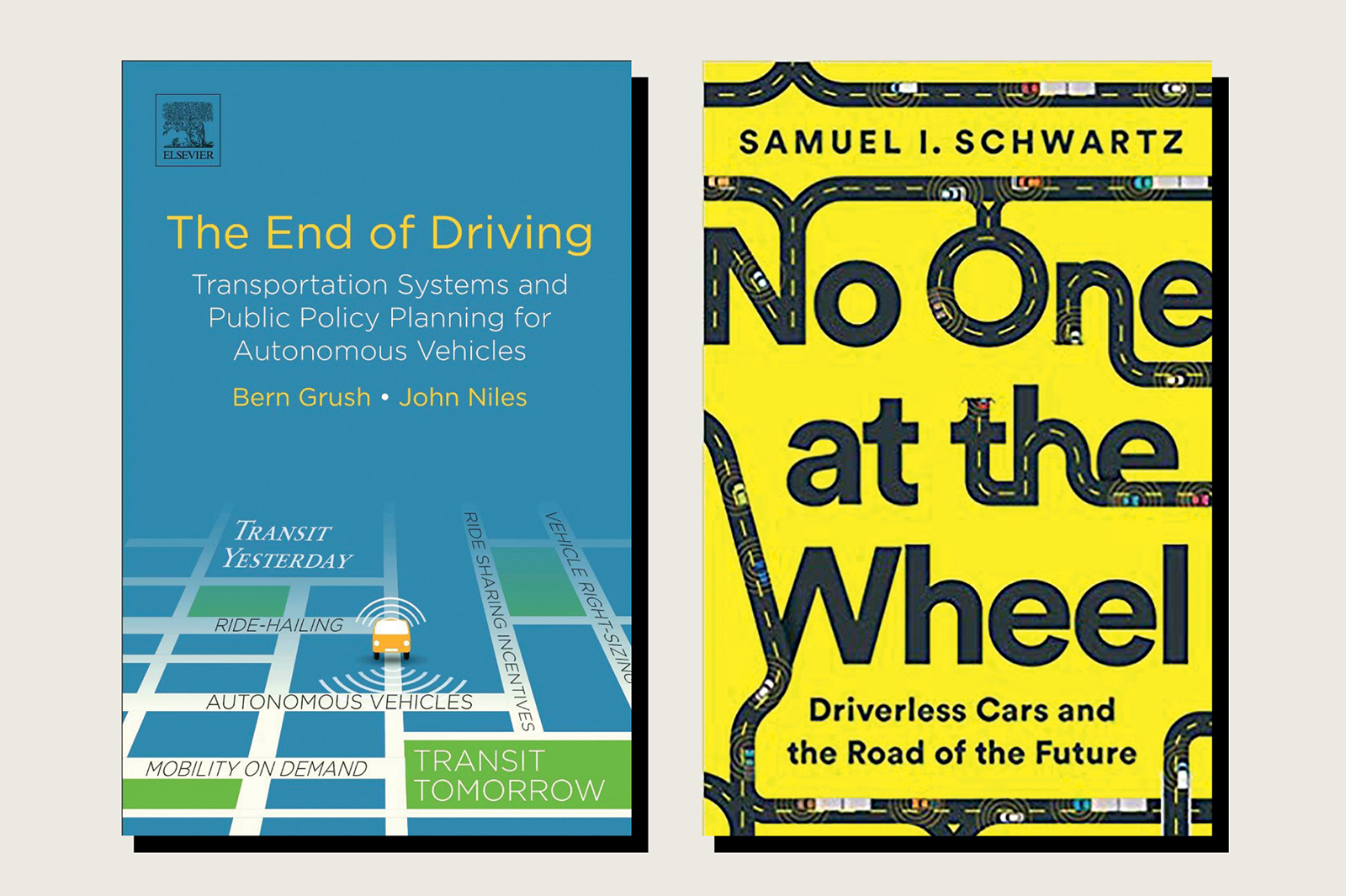 The End of Driving: Transportation Systems and Public Policy Planning for Autonomous Vehicles, Bern Grush and John Niles, Elsevier, 332 pp., $125, June 2018. No One at the Wheel: Driverless Cars and the Road of the Future, Samuel I. Schwartz with Karen Kelly, PublicAffairs, 272 pp., $17.99, November 2018.

Good luck. Americans like minibuses about as much as they do speed cameras and carpooling. Grush and Niles are fundamentally correct that automation is coming and that the important thing is to get it right. But they seem to think that “getting it right” means successfully integrating autonomous vehicles into urban mass transit systems. That approach may work in a centrally planned economy like China’s, but you can’t herd cats (or people) in the United States.

As a result, China may win the race to develop effectively integrated autonomous mass transit. But residents of America’s Sun Belt suburbs will already have a different option: catching robotaxis to the grocery store. More than a new urban transportation infrastructure, then, autonomous vehicles’ biggest impact may be new ways of living in the suburbs.

The last real leap forward in automotive transportation took place in the United States when Ford added automatic ignitions to its Model T range of cars in 1919. That single change meant the beginning of the end of the chauffeur. With no need to get dirty hand-cranking an engine, anyone could drive. It is true that cars have since become safer, more powerful, and more sophisticated, but the basic experience hasn’t changed: Understanding what it means to drive today means understanding decisions made a hundred years ago.

That’s why Schwartz begins No One at the Wheel with a look back at the rise and fall of a precursor to the car: the humble bicycle. In the late 19th century, the bicycle was the king of the road. It was bicyclists who in the 1880s lobbied state governments to improve intercity routes. They were soon run off those roads (figuratively and literally) by cars, as were pedestrians. Schwartz is keen to avoid such mistakes in designing the transportation systems of the future. He fears that the owners of autonomous vehicles will demand dedicated high-speed lanes, or even entire levels of cities, that will further marginalize pedestrians and cyclists.

One way to avoid that dystopia is to make sure that the future of transportation is shared. Like Grush and Niles, Schwartz is a big fan of the autonomous minibus. A public transportation booster with a New York-centric worldview, Schwartz also wants cities to use the transition to autonomous vehicles as an opportunity to implement congestion pricing and increase the ridership of mass transit. With no drivers to pay, bus routes that currently run at a loss—or are not offered at all—could be made economical.

Grush and Niles share Schwartz’s vision of the automotive future, but they also inadvertently show why it may not be possible in the United States. Where Schwartz’s writing is breathless and provocative, Grush and Niles write like the policy wonks they are; their vision of a government-run “harmonization management system” designed to get people to give up their cars sounds like something dreamed up for a Chinese five-year plan. Grush and Niles are not wrong to focus on the policy tools that governments can use to optimize the social impact of autonomous vehicles, including the use of variable road pricing to manage congestion, the gradual reduction of space for parking, and restrictions on the amount of driving done by zero-occupancy “zombie” vehicles. But their approach doesn’t stand a chance of being implemented in a free and democratic society.

In many ways, it will be easier for Chinese cities like Shenzhen to roll out the new technologies. They have outlawed motorcycles and aggressively prosecuted jaywalking to create a sanitized environment that is perfectly suited for autonomous vehicles. In the United States, where most research and development into autonomous vehicles is driven by the private sector, the road conditions are much more challenging.

As a result, U.S. companies may take longer to succeed. But when they do, their potential for technological disruption will be profound—and not just in dense cities like New York and San Francisco. In the United States, at least, the future of transportation will be settled in the sprawling suburbs, where more people own cars and public transportation just isn’t competitive—at any price.

Transportation professionals like Schwartz, Grush, and Niles are inordinately concerned with the “last-mile problem”—the challenge of getting people to and from mass transit systems like subways, trams, and bus lines. If we could only get Americans from their homes to the bus stop and from the bus stop to their offices, the reasoning goes, they would give up their cars.

But a fixation on mass transit blinds Schwartz, and to a lesser extent Grush and Niles, to a much more likely use for autonomous vehicles in the United States. All across suburban America, parents grumble that they have become chauffeurs for their spoiled kids. What if they could afford (computerized) chauffeurs of their own? The vehicles could deliver groceries or run to the drugstore drive-through to pick up medicine for a sick kid. With those needs taken care of, will suburban parents still want to own and drive their own large SUVs?

Grush and Niles are doubtful that suburbanites will be willing to wait for a ride; Schwartz puts the make-or-break wait time for the routine use of ride-hailing services at about five minutes. That would require robotaxi operators to station so many cars in suburban areas that the service could never be profitable, because the cars would have to sit idle most of the time.

But the fact that most people already consider it economical to keep cars idle in their garages should give skeptics of autonomous vehicles pause. It suggests that it’s already economical to keep millions of cars on hand, just waiting to be used. If a fleet operator could get away with stationing one robotaxi in front of every house, instead of the one car per driver most suburbanites currently have, the robotaxi model would already be less wasteful.

There are other ways to make the economics of suburban robotaxi services work, too. One is to link the taxis’ batteries to a flexible electrical grid. Electricity demand has always been intermittent, but as societies shift toward renewable energy sources like wind and solar, electricity supply is becoming intermittent, too. And when both supply and demand are intermittent, electricity prices become very volatile. Home storage batteries that can connect to the broader grid are the electricity industry’s stopgap solution to the supply and demand challenge, and some electrical utilities are subsidizing consumers to install them.

But keeping a mostly unused battery in your garage is just as wasteful as keeping a mostly unused car. Connecting the battery of your personal electric car to a smart grid that manages local supply is less so, but what if you need your car just after the electric company has drained its battery? Putting personal transportation and power management in the hands of the fleet operators could solve this problem.

Freed from their dependence on car ownership, American suburbs could hold onto their young new graduates, help older people stay in their family homes, and attract a more diverse population.

The potential for a smarter energy system is enormous, but it isn’t the only advantage of a fleet of robotaxis. Grush and Niles called their book The End of Driving, but Schwartz points out that the spread of robotaxis could also mean the end of parking, which he says adds an average of 20 minutes to every urban trip. So-called phantom traffic jams caused by people unconsciously slowing on hills could also become a thing of the past. But the big win for autonomous vehicles is system-level change that gets us out of our cars and transforms everything from housing patterns to the energy market.

Freed from their dependence on car ownership, American suburbs could hold onto their young new graduates, help older people stay in their family homes, and attract a more diverse population. The addition of millions of mobile batteries to the electricity grid could give wind and solar energy the backup reservoirs they need to become competitive with coal and natural gas. While transportation planners are looking to autonomous vehicles to solve the last-mile problem, they may end up instead sparking a suburban renaissance that bypasses the cities altogether.

Schwartz’s No One at the Wheel is an entertaining and engaging introduction to the world of autonomous vehicles, and if you only ever read one book on the subject, this should be it. If you really want to understand the detailed architecture of autonomous vehicle policy planning, go with Grush and Niles’s The End of Driving instead. Or, for full effect, read both. Schwartz liberally quotes Grush throughout his book, and there is a great deal of convergence in their conclusions.

Both books provide plenty of practical insights into how autonomous vehicles will transform personal transportation, especially in the United States’ largest cities. But transportation is only one aspect of a much more complicated story. The transition from the railroad to the automobile in the early 20th century completely reconfigured American society. The transition from personal vehicles to robotaxis will do something similar, although the details remain to be determined. These two books don’t provide the answers, but they do make it possible for their readers to start framing the questions.

Salvatore Babones is an adjunct scholar at the Centre for Independent Studies in Sydney and an associate professor at the University of Sydney. Twitter: @sbabones

Self-Driving Cars Are on the Road to Nowhere

Technology companies have been selling a vision of greener cities and safer roads. It's nothing more than hype.

How the Electric, Self-Driving Miracle Car Will Change Your Life

And save the world.