Why Young Koreans Love to Splurge

Sometimes blowing your paycheck can be a rational choice.

In 2017, young people around the world fired back at an Australian millionaire who chided them for “spending $40 a day on smashed avocado and coffees” and still expecting to be able to buy a home. But in South Korea, a generation of frustrated young people is reclaiming the idea of frivolous expenses—from cab rides to expensive sushi—as a psychological survival tool dubbed shibal biyong.

In 2017, young people around the world fired back at an Australian millionaire who chided them for “spending $40 a day on smashed avocado and coffees” and still expecting to be able to buy a home. But in South Korea, a generation of frustrated young people is reclaiming the idea of frivolous expenses—from cab rides to expensive sushi—as a psychological survival tool dubbed shibal biyong.

Loosely translated to “fuck-it expense,” the term is a compound noun combining shibal (a swearword for frustration) and biyong (expense). It first appeared in late 2016, with the earliest tweet about it referring to “an expense that I would not have spent if I weren’t under stress,” such as “an impulsive food delivery or a cab ride.” The post caught on, and the term was named “neologism of the year” by several South Korean media outlets.

A shibal biyong is an expense that might seem unnecessary but that helps you get through a bad day. It’s the $20 you splurge for a cab home instead of taking the subway after you’ve been denied a promotion or the comforting but expensive sushi you buy after you’ve been berated by your boss. The term implies that you might as well make yourself happy right now because your prospects in the long term seem bleak. Buy that nice coat, because you’ll never get on the housing ladder. Eat that steak, because you’ll never save up enough to retire.

Shibal biyong didn’t come out of nowhere. It shares a sensibility with phrases like geumsujeo (gold spoon) and hell Joseon (hellish Korea), which became popular several years ago and express the collective despair of a generation of South Koreans who find life in their country intolerable because it seems rigged to benefit people born into wealth (like gold spoon kids) or rich enough to emigrate.

According to Statistics Korea, in 2015 seven out of 10 young people believed inequality was a major problem—and with reason: Among countries in the Organization for Economic Cooperation and Development (OECD), for example, South Korea ranks 31 out of 36 on income inequality, according to the latest available data. In 2018, youth unemployment reached its highest level since 1999, in the aftermath of the 1997 Asian financial crisis. Part of the blame for these problems lies with South Korea’s chaebol—giant family-owned conglomerates—which still monopolize much of the country’s economy and stifle entrepreneurship, leaving young Koreans competing to enter the hierarchical and gerontocratic world of chaebol jobs for want of any alternative.

The title of a recent South Korean bestselling book, I Want to Die, but I Want to Eat Tteokbokki (spicy rice cakes), captures the essence of shibal biyong.

Inequality and a sense of economic despair have taken a fierce toll on South Koreans’ mental health. Nearly half of all deaths among South Koreans in their 20s are due to suicide, compared with just under 1 in 5 Americans of the same age. The country’s overall suicide rate was the highest among OECD countries from 2003 to 2016.

The title of a recent South Korean bestselling book, I Want to Die, but I Want to Eat Tteokbokki (spicy rice cakes), captures the essence of shibal biyong. Or as BTS, the most famous Korean boy band, sings in “Go Go”: “No money but I want to eat Jiro Ono [sushi] / worked hard to get my pay / … / let me be even if I overspend / even if I break apart my savings tomorrow.”

According to one survey from 2017, the usual maximum amount people spent on a single shibal biyong was around $90. The rate of increase in consumer spending among millennials—those born in the early 1980s to mid-1990s—since 2014 is twice as high as that of baby boomers, according to credit and debit card usage data obtained by South Korean media last year. At this pace, by 2020 the average millennial may outspend the average baby boomer (a generation that in Korea is a decade younger than its U.S. counterpart, dating to the boom at the end of the Korean War), despite having far less wealth. 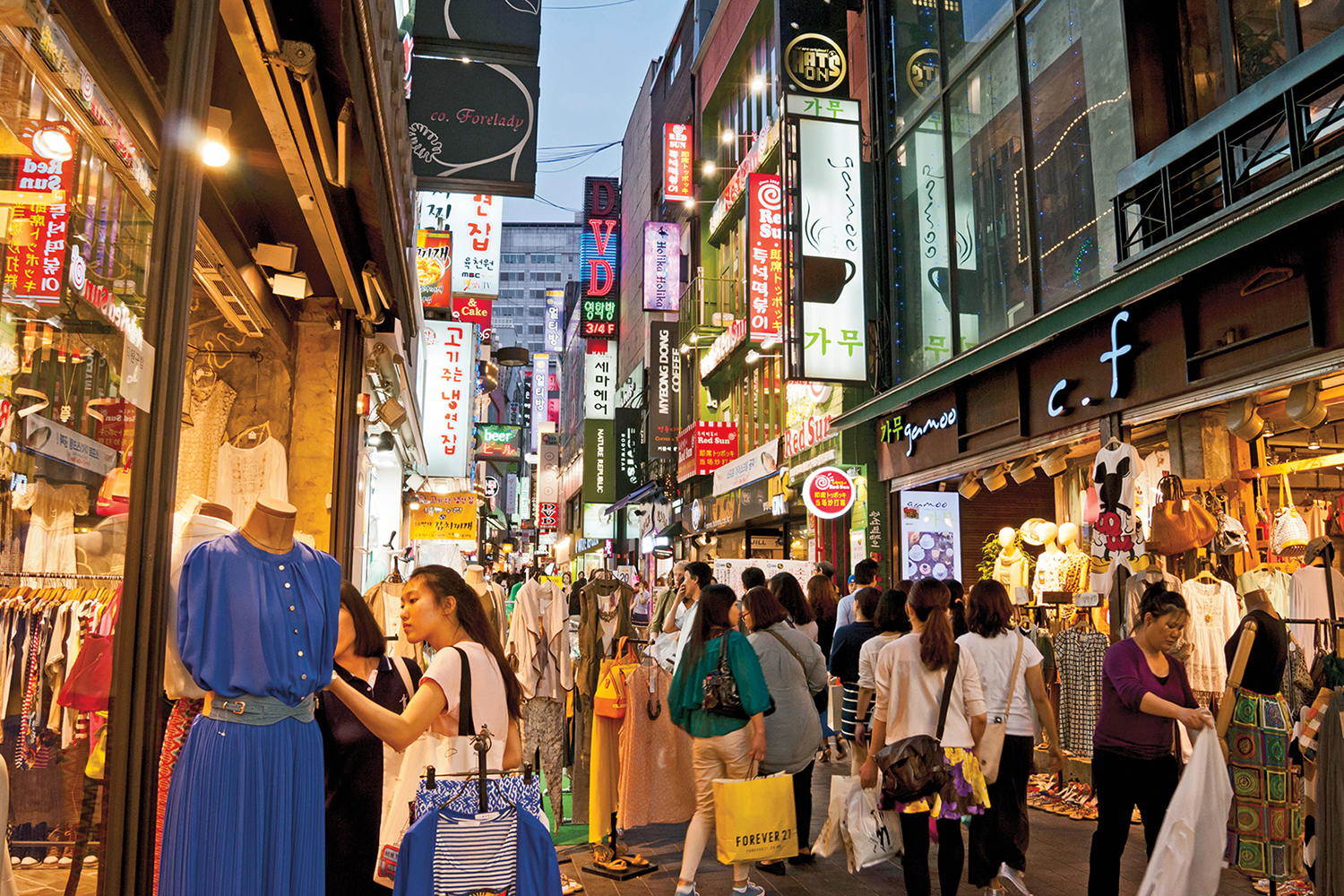 If South Korean millennials are squandering their money, it’s not because they’ve lost touch with reality. Quite the opposite: For many of them, short-term consumption has become a rational choice maximizing the utility of money based on a realistic assessment of the future. A 2018 survey by the National Youth Policy Institute showed that 46 percent of young people in South Korea believed that buying a house would either “take more than 20 years” or “never be attainable.” The Seoul metropolitan area, where nearly half the country lives, now has housing prices that equal New York City’s—without the salaries to match. Many millennials have begun avoiding traditional investment options, such as stocks and bonds, either because they can’t save enough money or because they think the gains can’t possibly keep up with rising expenses.

When influencers manage their stress by, for example, posting beautiful pictures of an impulsive excursion to Bali with the hashtag #shibalbiyong, it normalizes a culture of instant gratification.

“Shibal biyong and tangjinjaem [squandering fun] are symbolic endeavors responding to social problems via individual consumption,” said Alex Taek-Gwang Lee, a professor at Kyung Hee University in Seoul. “As saving cannot guarantee the future, unlike in the past, the idea of investing in the present rather than the future gains strength.”

Social media is another driving force in the shibal biyong phenomenon. South Korea has the highest smartphone ownership and internet penetration in the world. Most millennials use platforms like Instagram, Facebook, and KakaoTalk, where conspicuous consumption is celebrated and “fuck-it expenses” have gained social approval. When influencers manage their stress by, for example, posting beautiful pictures of an impulsive excursion to Bali with the hashtag #shibalbiyong, it normalizes a culture of instant gratification.

Shibal biyong has begun to resonate with millennials outside South Korea. Young Americans have also started splurging on short-term pleasures despite—or perhaps because of—the fact that so many of them graduated from college in the years following the 2008 financial crisis. And despite years of wage increases lagging behind the rate of inflation until recently, “treat yo’ self” consumption has taken hold among American youth spending on indulgences such as Uber rides—around half of adults under 30 in the United States regularly use ride-hailing services—or food delivery from Grubhub.

Policymakers need to take the concerns of millennials seriously instead of dismissing an entire generation as self-indulgent. In 2018, the Bank of Korea reported that people in their 20s scored the lowest on “financial behavior and attitude”—at least in the bank’s definition of sensible saving—among the working population, despite having the highest level of financial knowledge of all age groups. To respond, the bank suggested, the government should adopt policies that “nurture proper values, as the youths today put too much emphasis on consumption.”

But such arguments miss the point. Cathartic consumption is based on young Koreans’ sincere—and perhaps accurate—belief that new policies alone won’t rectify systemic economic problems. Koreans have begun blowing their money not out of ignorance but out of common sense. A small pleasure now is better than a promised future contentment that will never come.

Korean millennials might not be spending like their parents, but they are actually doing a reasonable job budgeting their shibal biyong, trying to balance today’s happiness against a potentially grim financial future. Millennials know they can’t afford their small pleasures. But they can’t afford anything else either, even if they give up the splurges that get them through the day. Only when measures are taken to make them believe that affluence is attainable will saving for the future make sense.