Afghanistan’s Forests Are Turning a Profit for the Islamic State

Wood smuggling is big business for the terrorist group.

July 15, 2019, 8:47 AM
By Stefanie Glinski, a journalist covering conflicts and crises with a focus on Afghanistan and the wider Middle East.

“Daesh is just over there,” the uniformed 22-year-old said, pointing to a tree-covered hill less than a mile away, using the Arabic name for the Islamic State.

Small numbers of fighters for the Islamic State of Khorasan Province, the Afghan branch of the militant group, have been in Kunar since 2015. But the group’s new stronghold is in Kunar’s deep forests, inheriting a booming wood industry previously controlled by the Taliban that is now generating a growing income for Islamic State militants.

“Daesh is just over there,” the uniformed 22-year-old said, pointing to a tree-covered hill less than a mile away, using the Arabic name for the Islamic State.

Small numbers of fighters for the Islamic State of Khorasan Province, the Afghan branch of the militant group, have been in Kunar since 2015. But the group’s new stronghold is in Kunar’s deep forests, inheriting a booming wood industry previously controlled by the Taliban that is now generating a growing income for Islamic State militants.

Safi’s government outpost in Chawkay district is along one of the front lines for the war on the Islamic State. But it’s also a key entry point for smugglers bringing wood from the forests to other parts of Afghanistan or neighboring Pakistan, using mules maneuvering through mountainous terrain or hiding the logs in secret compartments of trucks that cross the official border. 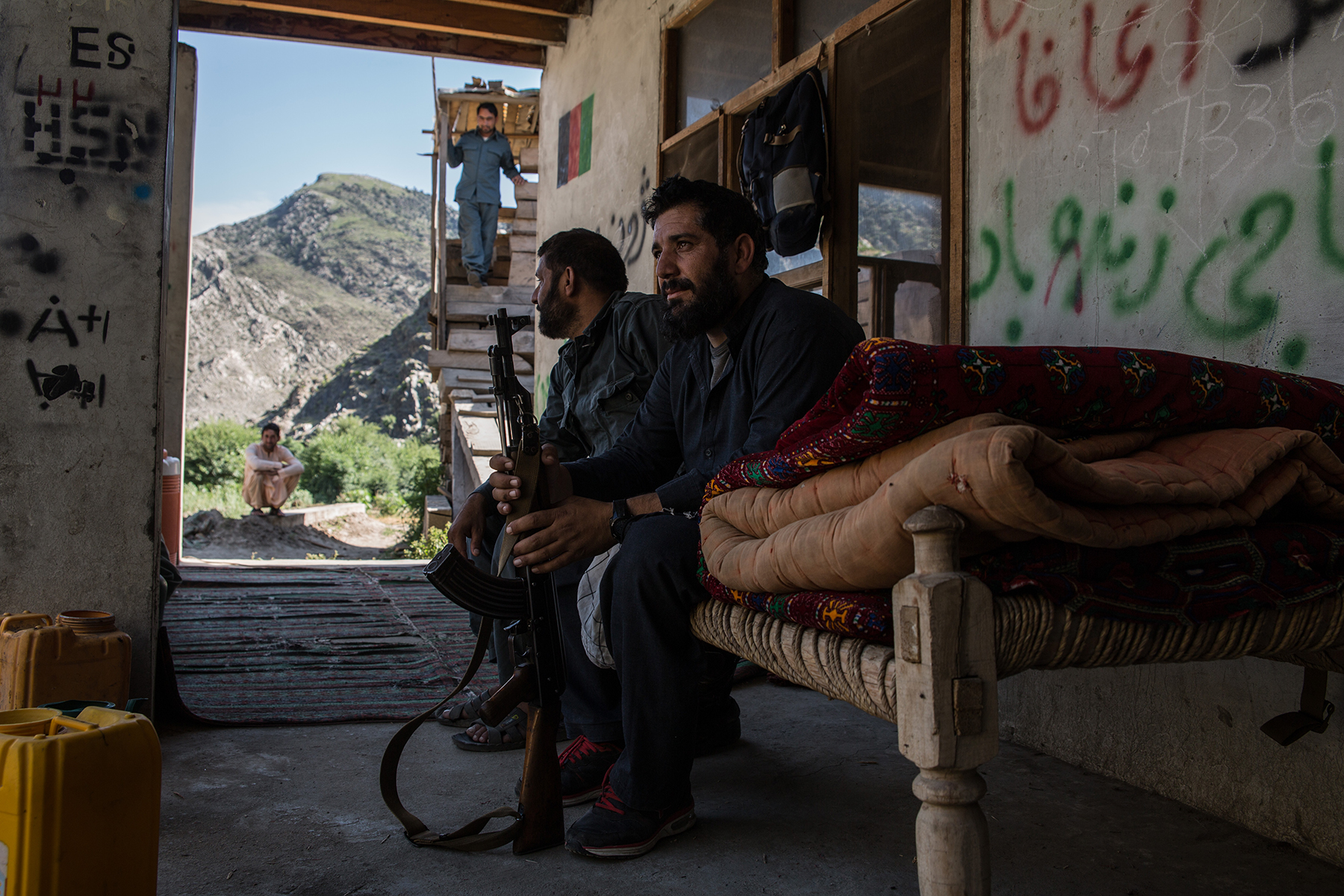 Police officers sit at the last government checkpoint in the Chawkay district of Afghanistan on May 29. The location is an entry point for businessmen bringing illegally felled trees from Islamic State-controlled forests. Stefanie Glinski for Foreign Policy

The provincial government banned the sale of wood in 2016, fearing increasing deforestation and desertification, as an average of 10 hectares of forest are being cut down annually, according to Enamullah Safi, the director of the Kunar Agricultural Directorate.

He got out his phone and flicked through his images. “Here it is,” he said, nodding toward an image of hundreds of logs floating down the river. “We found these just a few weeks ago on their way to Pakistan but were able to stop it. Our province has some of the best wood, and that reality is destroying us.”

Kunar used to be covered in oak, pine, and walnut forests, but over the last three decades it has lost 40 percent of its trees, leaving the easier-to-access mountains already barren and dry in the summers, with most of the forest areas now a several-hour hike into the deep woods. In Chawkay, they lie in stacks of lumber—each plank about 8 feet long. The smell of fresh wood lingers in the air, but the trees are dead.

Around the provincial capital of Asadabad, with the Kunar River in its midst, few trees are left, and the landscape is now no more than rugged grass-covered hills.

Most of the trees around here have already been cut down, and it takes several hours to reach what locals refer to as the “jungle.” 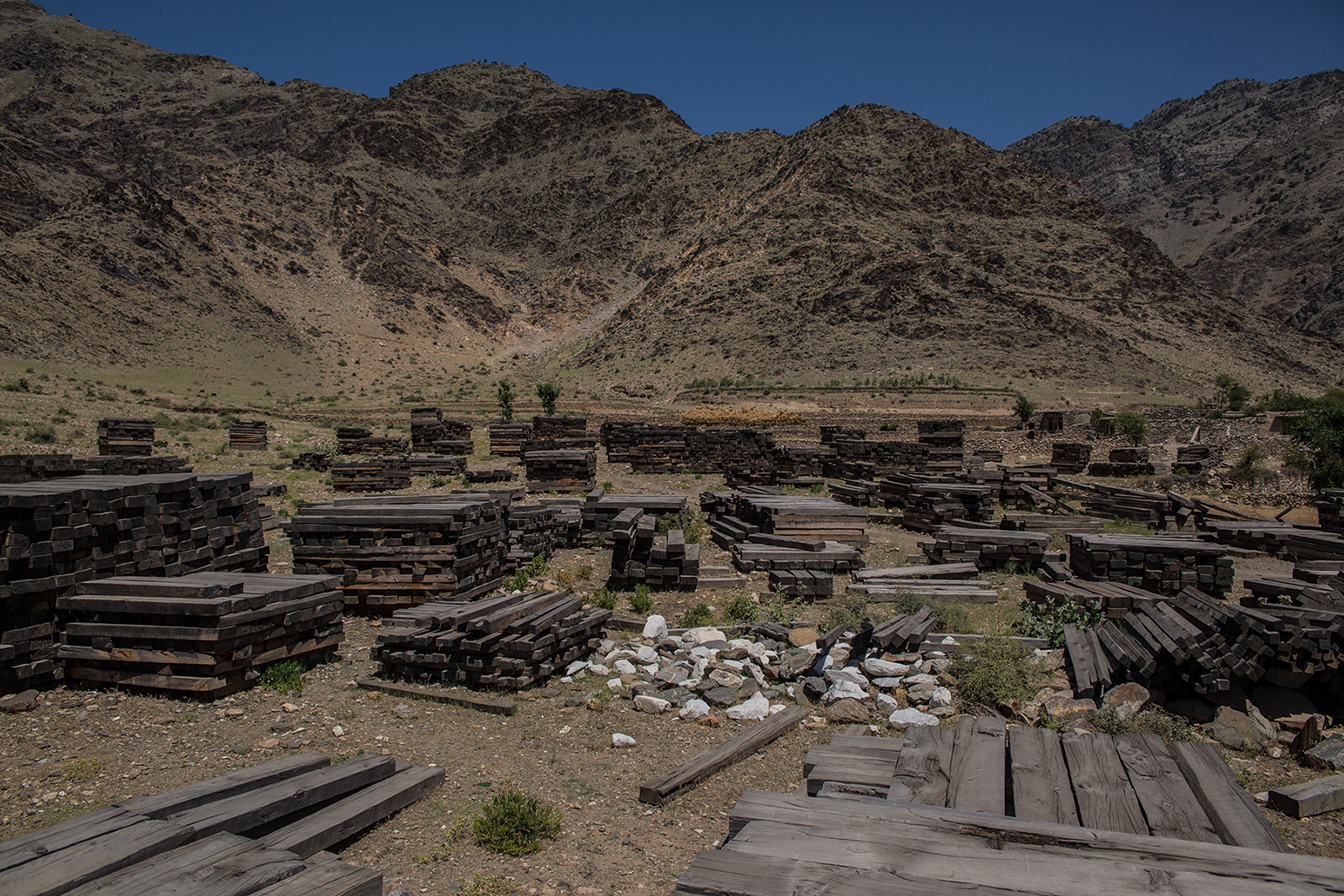 Stacks of wood sit in the sun, ready to be smuggled out of the province in Chawkay district, Kunar, Afghanistan, on May 29. Stefanie Glinski for Foreign Policy

“It’s a huge business for Daesh,” said Mohammed Kamil, a 40-year-old father of five from Chawkay district who has been working in the wood industry for the past two decades. He estimates that around 20,000 trees are smuggled to Pakistan annually.

“The process is complex, as are the numbers,” Kamil said, adding that most “jungle areas” have switched sides over the past year. “It’s a Daesh stronghold. In the past I paid the Taliban, but now the money goes to them.”

“The trees are cheap, but I also have to add extra costs for taxes, bribes, and transport,” he said.

Despite the government’s efforts to end the trade, many officials turn a blind eye. “It’s the ultimate source of income in an area that sees 60 to 70 percent of people living under the poverty line,” the Agricultural Direcrorate’s Safi said. “The Islamic State is making illegal money from it, but so is the police.”

Kamil—as well as other wood smugglers—estimates that between 1,000 and 2,000 Islamic State fighters live in the roughly half a million-strong province, a number Ministry of Defense spokesperson Zubai Arif refutes. “More than 95 percent of Daesh are finished in the country,” he said from his Kabul office.

“He has no idea,” argued Bilal Ahmat, a 28-year-old Islamic State fighter from Pakistan, who previously lived in Kunar but recently moved to neighboring Nangarhar province.

“Many young men who want to fight jihad join us. I’ve met Uzbeks, Chinese, Indians, and even Europeans here. Criminal activities and smuggling partly funds us,” he explained through a Pashto translator in a riverside restaurant in Nangarhar’s provincial capital, Jalalabad, a busy hub that has seen a surge in violence and Islamic State-claimed terrorist attacks over the past months. 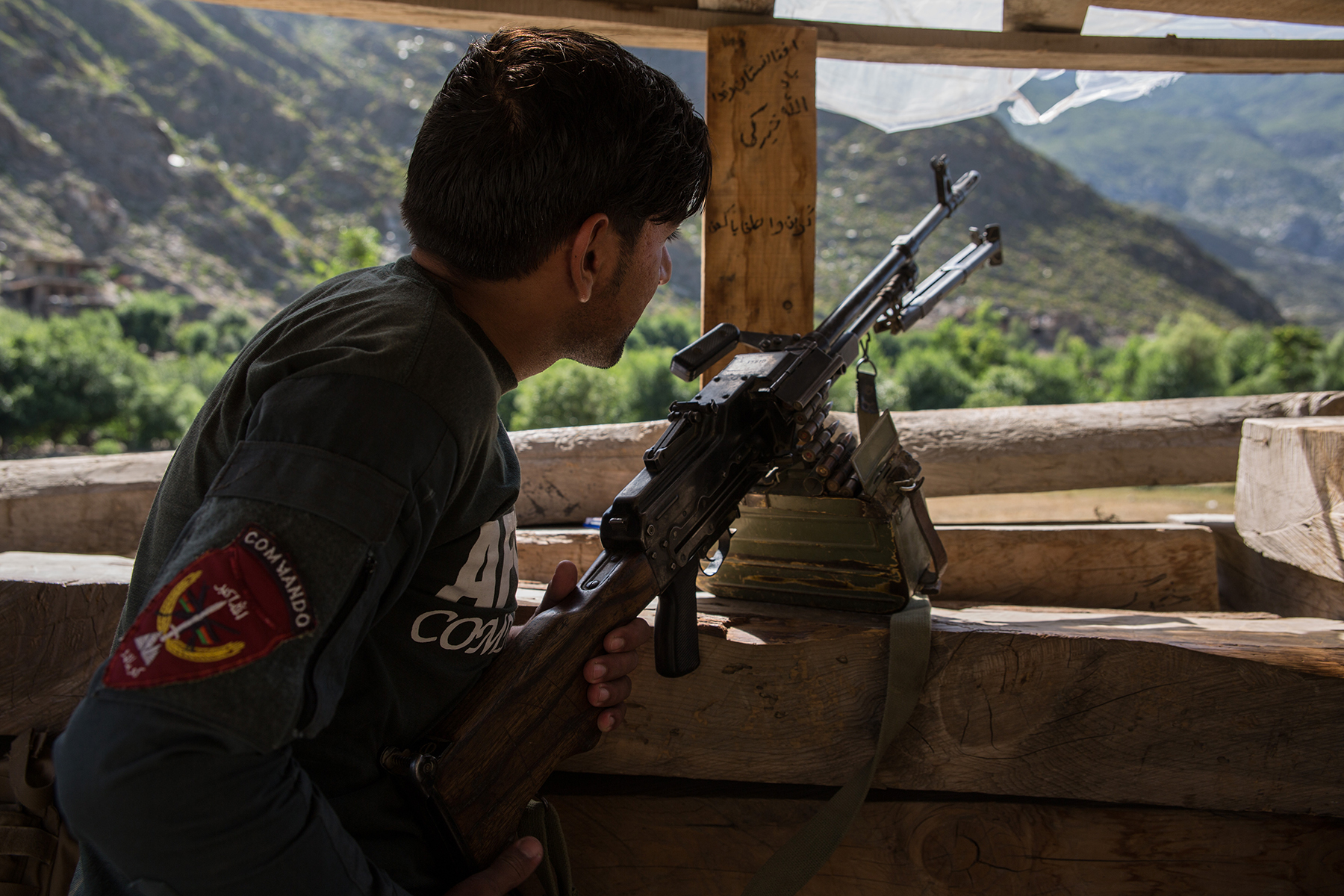 Matiullah Safi, a 22-year-old police officer, keeps watch at the front line in Chawkay district on May 29. Members of the Islamic State are in the mountains less than a mile away, he says. His checkpoint is built from the same wood that is otherwise smuggled out of the province. Stefanie Glinski for Foreign Policy

Much of the wood makes its way to Jalalabad from Kunar, and the 38-year-old carpenter Abdul Nasir said he regularly drives to Kunar’s so-called jungle to do business with Islamic State militants.

“It’s not that the group sells wood collectively. Local businessmen in the wood industry might be part of the insurgent group, and I also pay a 10 percent tax to them,” he said.

Nasir, who sat next to his woodworking shop in a small carpeted room filled with thick cushions and a small television in the corner, said that he is not afraid to meet with the fighters. “We’re doing business with each other, so we have to keep good relations.”

Smugglers stay on friendly terms with all parties: the local government, the Islamic State, and the Taliban. But the militants aren’t so friendly, even with one another.

Just over a year ago, Kunar’s main forests in Mazar, Dewagal, and Korengal valleys were under the control of the Taliban, but now they have been conquered by the Islamic State. Thousands of people fled their homes when fighting broke out, leaving only a few stragglers. Between government airstrikes, insurgent attacks, and countless front lines, no one is winning the war in Kunar.

“We continue to see heavy fighting between Taliban and [the Islamic State of Khorasan Province] in Nangarhar and Kunar,” said Col. Knut Peters, a spokesperson for NATO. Territories between the two groups can change hands frequently. 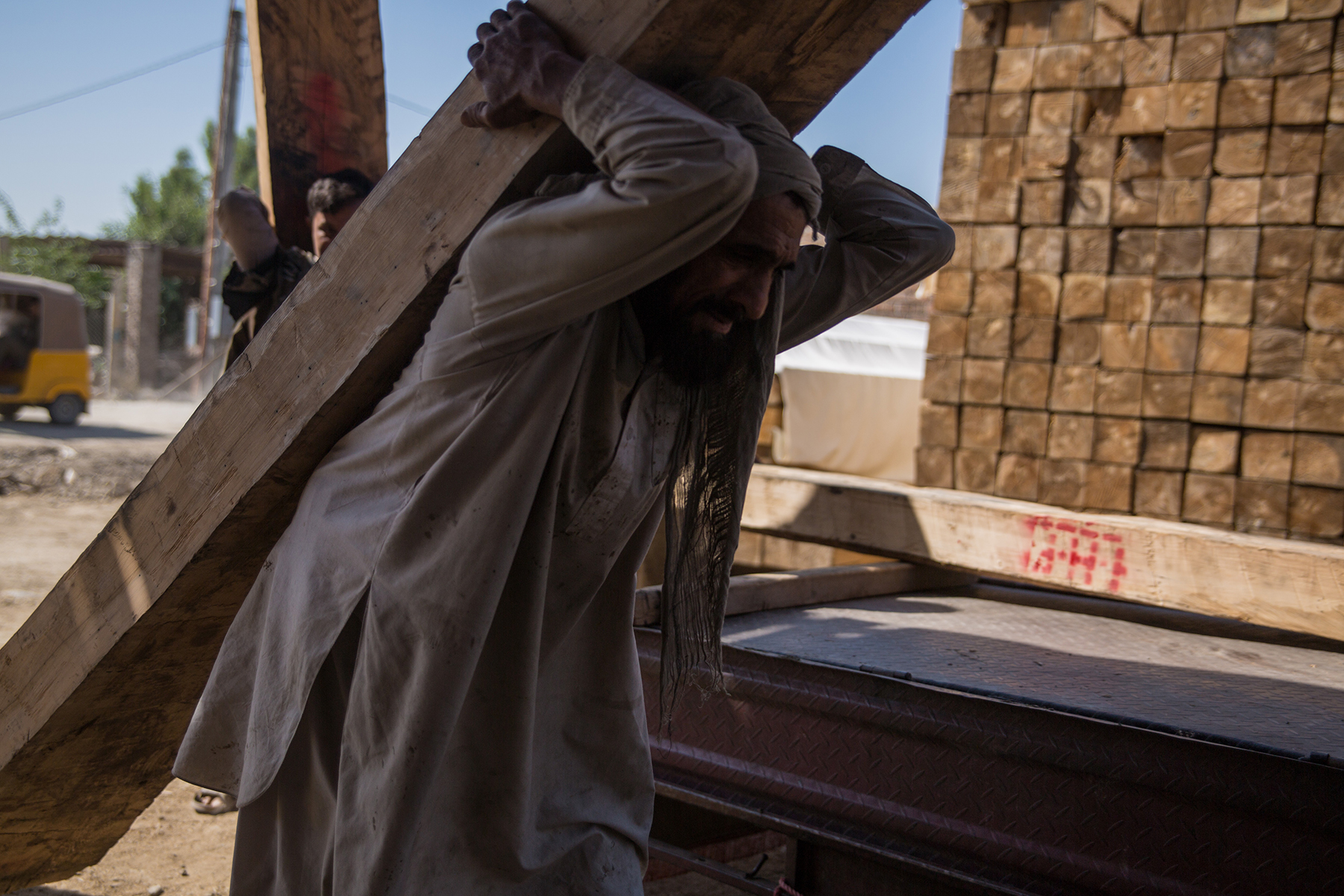 A man stacks planks at a storage facility in Jalalabad, Afghanistan, on May 30. Stefanie Glinski for Foreign Policy

But when it comes to the wood business, smugglers say they move freely between all areas.

“If I pass through a Taliban district, I pay 100 Pakistani rupees [65 cents] tax for two planks of wood. Local police wants 2,000 rupees [$13] per log in bribes,” Nasir said, explaining that he tries to avoid passing through government areas to save costs. “Everyone—including the local government and warlords—are part of the illegal trade, otherwise it wouldn’t work.”

Nasir admitted that it’s a good business for him—with a monthly income of roughly $600—but a catastrophe for the country. According to the Kunar Agricultural Directorate, 25 million cubic feet of wood and timber have been transported out of the province since 2002, and the deforestation has caused serious environmental harm such as heavy water sedimentation of the Kunar River.

Back at Safi’s checkpoint in Chawkay district, the police officer said it’s tough to estimate how much the Islamic State is actually making between selling trees and taxing the wood industry.

His checkpoint is built from the same planks that are smuggled out of the province, though “the ones we used were chopped down several years ago,” he said.

Nasir doesn’t see anyone clamping down on the business soon—and he’s pleased with that, even as he’s worried for the province’s future.

“It’s our only way to make an income, and no real measures are taken to prevent it,” he said. “While the war is going on, deforestation will continue.”

NEW FOR SUBSCRIBERS: Want to read more on this topic or region? Click + to receive email alerts when new stories are published on Environment, Afghanistan