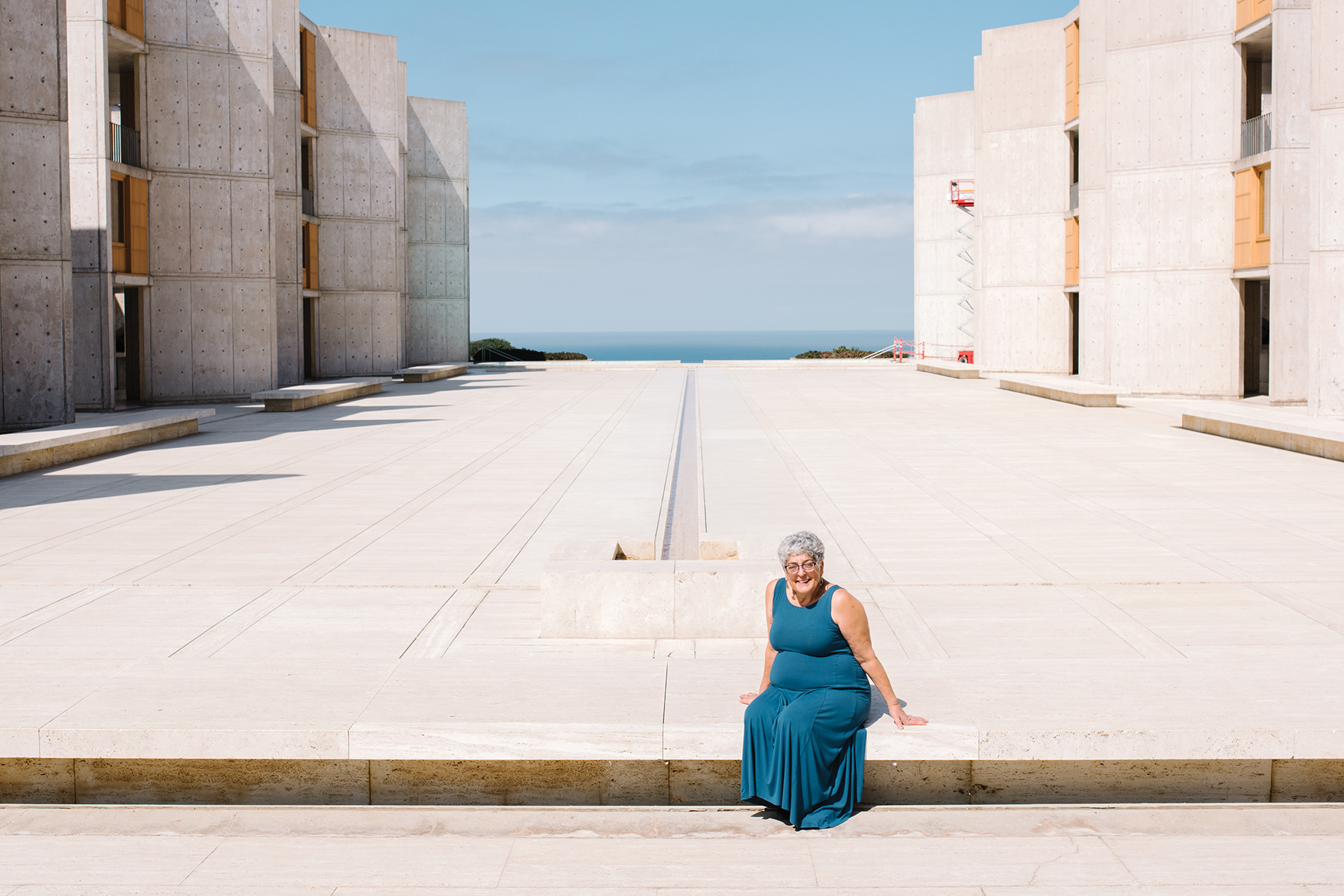 Crops already suck up a lot of carbon dioxide. One scientist thinks they can do much more.

The fight against climate change may seem hopeless, but humanity has a simple and powerful ally in plain sight: plants. At least that’s the belief of the botanist Joanne Chory and her team of scientists at the Salk Institute for Biological Studies in San Diego.

As part of her Harnessing Plants Initiative, Chory is focused on genetically modifying plants to absorb more carbon dioxide—and then hold on to it for longer—than their wild cousins through a larger and deeper network of carbon-storing roots, creating so-called Ideal Plants. Every year, humanity emits 37 gigatons of carbon dioxide; photosynthetic life can process and capture nearly half of that amount. Chory believes that coaxing a little more productivity out of plants could make a dramatic difference. And she has no shortage of backers: In April, Chory received a more than $35 million Audacious Project prize to drive her team’s research.

Any project on climate science is a race against time. That’s particularly true in Chory’s case: Now in her 60s, she has been battling Parkinson’s disease for several years.

Foreign Policy: Tell us about the Ideal Plant project. When did it start?

Plants have evolved over the last 500 million years to suck up carbon dioxide. They're really good at it.

Joanne Chory: The Ideal Plant project was officially launched in 2017. It proposes a different way of thinking about climate change in casting carbon dioxide as a friend—as opposed to a villain in some epic, horrible science fiction story. Plants have evolved over the last 500 million years to suck up carbon dioxide. They’re really good at it. We decided to take advantage of that to come up with a cost-effective and efficient way of actually pulling carbon dioxide down from the atmosphere and sequestering it down into the soil—where it should be.

JC: There’s this huge system called the carbon cycle [the process by which organisms absorb atmospheric carbons and then transmit them back into the atmosphere]. We’re throwing the carbon cycle out of balance by creating an extra 37 gigatons of carbon dioxide every year. Our ecosystem can naturally take up 17 gigatons of that carbon dioxide in the soil and the ocean. But the other 20 gigatons is what’s been heating up the atmosphere and wreaking havoc with our weather systems. There’s an urgency to deal with that. And one way to solve that problem is to have plants absorb some of those carbons. The Ideal Plant project has chosen a compound that all plants make in their roots: It’s called suberin, and it’s the perfect carbon storage device. We’re trying to get plants to make more suberin. All we have to do is make them about 2 percent more efficient at redistributing carbon than they are right now, and we can effect a global change. 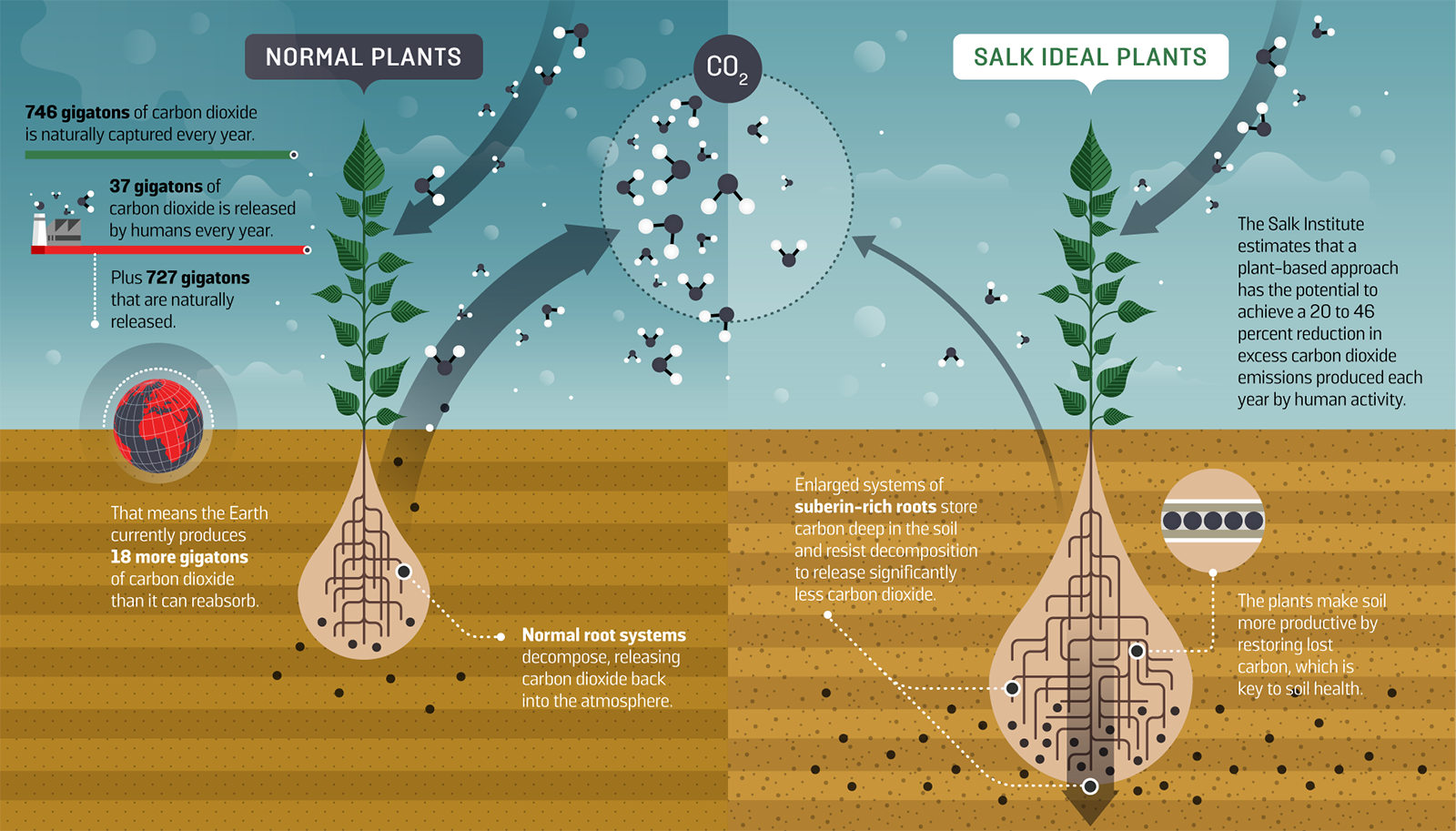 FP: Explain what exactly suberin is and how you would increase its production.

JC: You know the cork tree? That’s a form of suberin—cork is one kind of suberin molecule. All of these molecules are characterized by this middle portion, which is just carbon after carbon after carbon. That’s the part that doesn’t break down. It’s called refractory or recalcitrant. So that carbon will stay in the soil. If you look at a carbon-rich soil like peat, it’s full of molecules that are carbon-rich, and these molecules look a lot like suberin. Most soil in the United States is depleted of carbon. If we put carbon back into soils, that would be a co-benefit of the sequestration process that we’re expanding.

FP: So, in a sense, you’re accelerating what nature already does?

We're supercharging plants just by giving them a little more of a molecule they already make.

JC: That’s right. We’re supercharging plants just by giving them a little more of a molecule they already make. The Ideal Plant is so cool because it’s sequestering carbon safe in the earth from human activity that’s causing the planet to overheat.

FP: How much are you hoping to achieve through this supercharging process?

JC: If we could pull down 10 percent of those 20 gigatons [of extra carbon dioxide in the atmosphere], so 2 gigatons, that’s a global change. If you just put a plant in the soil and you don’t till the soil, some amount of carbon will get trapped. And then if we have our suberin-supercharged plants in the same soil, how much carbon will be sequestered in it? It’s going to take a couple of years of making measurements once we have those plants in the soil. The main thing about what we’re doing is it’s scalable. Land is what’s really missing here for the Earth right now because we have a lot of ecosystems that have been destroyed. Climate change is causing more destruction. 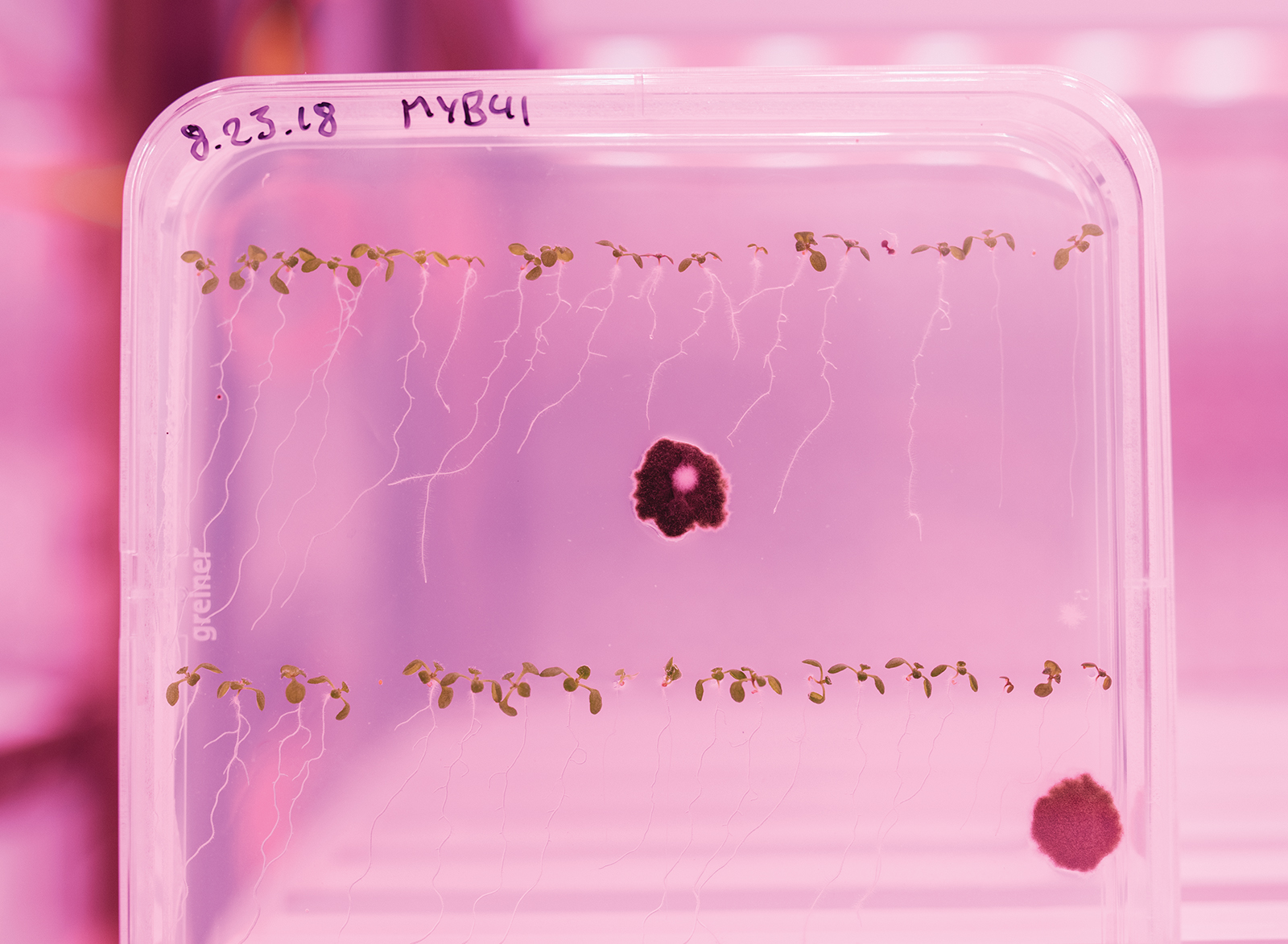 Seedlings in a grow room at the Salk Institute.John Francis Peters

FP: How do you get farmers on board to use these supercharged plants? What’s their incentive to join you?

JC: Farmers have a tough life as it is. They’re always mortgaging their house every year when they start their growing season. They can’t tolerate a loss in yield. That’s something we have to be very cognizant of and make sure that we have plants that will be attractive to the farmers. Also our plants are going to take about 10 years to really get online, and by then, things might be so bad that maybe we will have carbon taxes on companies that aren’t compliant on carbon footprint regulations. Maybe there will be credits for farmers who have crops that suck up carbon dioxide.

FP: Some critics might say that solutions such as yours merely maintain the status quo, especially since any real solution would have to focus on actually reducing carbon emissions. How do you respond?

JC: I think we have to reduce our carbon emissions, but it’s taking us a while to even make a dent in that. People don’t have the bandwidth to think about enduring hardship right now to help future generations—people they don’t even know yet. I think that philosophically it’s a hard thing to reduce emissions to the level that we’ve been asked by the Intergovernmental Panel on Climate Change, for instance. The second issue is the fact that photosynthesis can reduce the carbon that’s already up there as long as everybody pitches in. If we all were aware of our carbon footprint so that we emitted less and we brought on new technologies that don’t rely on carbon for energy, then we could reduce emissions even more. We’re not claiming that we can do it by ourselves. We just want to be a part of the process. We think we have a good idea and it’s worth exploring.

I think we have a great team, and they'll carry on without me in a year or two or three.

FP: There’s also some opposition to genetically modified organisms, especially in the European Union, which has outlawed them. What will those restrictions mean for your project?

JC: I’d like to say we don’t think fears about genetic modifications are the biggest issue right now. We really think we should try to save the planet first. But if there is opposition in Europe and India and a few other countries that aren’t on board with genetically modified organisms, then we have to take that into consideration because we need the land that their crops are being grown on as well. There’s a way to do it by breeding, of course, because there’s a lot of natural variations for a trait like the amount of suberin a plant makes. I think it can be done, but it’ll just take longer.

FP: What are the other roadblocks you face?

JC: I think the major roadblock was science. It’s really new science. But that’s the part that we feel most at ease with just because it’s something we’ve been doing. The other big challenge for us is policy. We have to start thinking ahead to three years from now when we might have seeds. What are the laws that we would like to have in place? What are the regulatory affairs that might get our plants approved faster if the government thought about it now? Another bottleneck is to get the farmers to want our product because that would ease regulatory affairs a little bit. If we don’t get the message out there, then people who might be willing to help us in some way won’t know we exist.

FP: You’ve spoken quite openly and powerfully about the constraints of time. Not only is the climate crisis truly upon us, but you’ve been battling a debilitating disease yourself.

JC: My Parkinson’s definitely made me sit back and think. I’ve had a wonderful career. I’ve raised two children during that career while I’ve had Parkinson’s. They don’t really remember me without the disease, unfortunately. But that’s life—it’s my life anyway. I’ve had a really lovely time at the Salk Institute. I’ve had great colleagues here and a wonderful work environment to be in. I get to enjoy the Pacific Ocean and beautiful sunsets every day. But I said I’d wake up and start doing something for the planet and for my kids and grandchildren who might come along someday. I feel like I have the weight of the world on my shoulders. And we have no choice but to try. I think we have a great team, and they’ll carry on without me in a year or two or three. I don’t know how long I’ll be around. But they can do it. I know that.