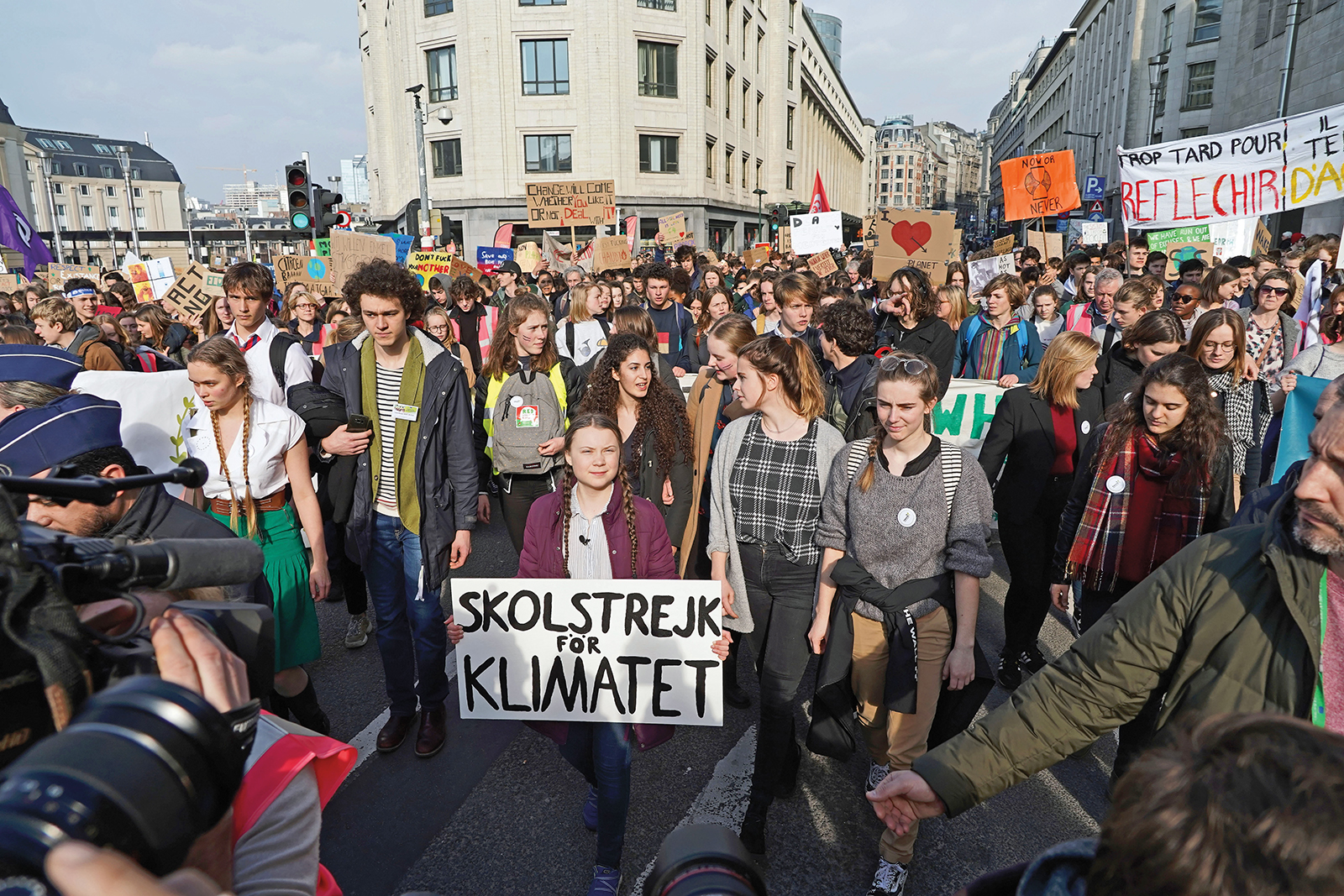 In today’s Britain, a rare public figure can bring together Brexiteers and Remainers, Conservatives and Labour. Yet the teenage climate activist Greta Thunberg did just that on a visit to London in April, when she was feted by British politicians from across the political spectrum.

In an address to Parliament, Thunberg said she spoke for the children who had been betrayed by politicians and voters who had failed to prevent climate change. She also claimed to speak for the unborn billions of people who will bear the brunt of a rapidly warming world. “I am 16 years old,” she said. “I come from Sweden. And I speak on behalf of future generations. … Now we probably don’t even have a future anymore.”

It would have taken a very brave politician to downplay the stark moral power of this message. None of her British interlocutors—from Labour leader Jeremy Corbyn to would-be Tory leader Michael Gove to the speaker of the House of Commons, John Bercow—dared. Instead, they all accepted the charges laid against them and promised to do better.

The climate crisis is an issue that requires long-term thinking across the generations, yet electoral politics is geared toward responding to immediate grievances.

Thunberg’s remarks showcased the profound gulf between younger and older generations when it comes to climate politics: the clash between those with the power to act and those who must live with the consequences if they don’t. The climate crisis is an issue that requires long-term thinking across the generations, yet electoral politics is geared toward responding to immediate grievances. Politicians can talk about taking the long view, but without institutional changes to the way we practice democracy, they are unlikely to look beyond short-term political gains.

The young and the old increasingly look like two distinct political tribes, and the differences are perhaps starkest over climate change. Recent polling in Britain indicates that for nearly half of all voters aged 18 to 24, global warming represents the most pressing issue of our time. Less than 20 percent of voters over 65 think the same. In the United States, only 10 percent of eligible voters aged 18 to 29 describe climate change as a “not very serious problem,” compared with 40 percent of those over 65 who call it that.

Observing the generational divide on climate change is easier than accounting for it. Thunberg’s rhetoric implies the distinction is a matter of morality: The older generations simply don’t care about the interests of the younger ones. Yet it is far from clear that older voters are less worried about climate change primarily because they won’t be around to see the worst of it. Older voters care about many things that don’t directly concern them. For instance, in the U.K., education ranks almost as highly for those over 65 as it does for those under 30.

Nevertheless, climate change has become a contest of worldviews split along generational lines—and it’s a contest that older voters are winning. That should be no surprise. After all, they are both more numerous and more likely to vote than their younger counterparts. When Thunberg speaks for the generations yet to come, she has the numbers on her side—the unborn limitlessly outnumber the currently living. But when it comes to actual voters, the math favors the climate skeptics or at least the people who have other priorities. Our world hasn’t just warmed rapidly in recent decades—it has also aged even faster.

Tackling climate change is going to require significant behavioral change: in what we eat, where we live, and how we travel.

If democratic politicians are to make good on their promises to Thunberg and her peers, one of the largest barriers in their way are their own electorates. And citizens may become more antagonistic as governments push forward on new policies. Tackling climate change is going to require significant behavioral change: in what we eat, where we live, and how we travel. Current patterns of food and energy consumption are unsustainable. If we and the planet are to survive, that will mean less meat, smaller homes, and fewer cars.

The old, however, tend to find changing their behavior to be more difficult than the young do. Again, this is not because they don’t care about the future of the planet nor simply because they won’t have to live with the consequences of failing to change. It is because age brings experience, and experience brings an aversion to loss. The older we are, the more likely we are to have things we don’t want to give up. People who have never driven a car will find it far easier to do without than people who have used one for their entire lives.

One solution to this generational imbalance might be to simply wait it out, since younger generations will replace older ones before too long. If generational divisions are primarily attitudinal rather than material, there is reason to think that young people will persist in their concern about climate change as they age. Eventually the college-educated young of the present will become the college-educated old of the future. The climate crisis will rise up the political agenda as climate-conscious generations ascend the age ladder.

The problem is that the climate can’t wait that long. Today’s enlightened young will not age quickly enough; decisive action needs to be taken before 2030, as the Intergovernmental Panel on Climate Change now insists.

One way to make that happen would be to redress the imbalance directly by lowering the voting age. Watching the 16-year-old Thunberg put Britain’s political leaders in their place, it was hard to think of a good reason why she should not be allowed to vote. But still, the politically plausible proposals—such as extending the franchise to 16- and 17-year-olds—would not be enough to make a decisive difference. The changes that could actually tip the numerical balance—such as extending the vote to all school-age children—are too contentious to be practicable. Giving children the vote is unlikely to lessen generational divisions over climate change. It could make those divisions worse—and thus set back progress on climate policy—if it looks like an obvious ploy to diminish the voting power of their grandparents. Maintaining the current voting age but phasing out votes for the very elderly is likely to be just as divisive. Appearing to gerrymander the entire electoral system, even with the best of intentions, will do little to bring the tribes together.

Bridging the generational divide is likely to require other kinds of institutional change. The evidence of the last 30-plus years of climate politics suggests that electoral democracy is not well suited to reaching a consensus on what is to be done. The inevitable partisanship of this form of politics reinforces wider social divisions. Different perspectives on the long-term future get turned into polarized positions on climate change, making it harder to reach a shared perspective on carbon emissions and renewable energy. Party politics drowns out the pursuit of common ground.

If electoral democracy is inadequate to the task of addressing climate change, and the task is the most urgent one humanity faces, then other kinds of politics are urgently needed. The most radical alternative of all would be to consider moving beyond democracy altogether. The authoritarian Chinese system has some advantages when it comes to addressing climate change: One-party rule means freedom from electoral cycles and less need for public consultation. Technocratic solutions that put power in the hands of unelected experts could take key decisions out of the hands of voters.

But there are two reasons to doubt that this is what the climate emergency needs. First, any transition from a democratic to a post-democratic system would be massively disruptive. The barriers in the way of action on climate are also barriers to other forms of radical political change. There would be resistance, including from older generations. Second, it would not satisfy Thunberg’s generation either. She was not asking for less democracy. She was asking for a democracy in which she could be heard.

What’s needed instead are democratic reforms capable of moving past the generational impasse in electoral politics. One alternative is more deliberative democracy, which would allow individuals with different points of view to engage with each other directly, free from partisan representation. They might not end up agreeing, but at least they would be speaking for themselves and encountering new opportunities to reach consensus. In citizens’ assemblies, school-age children and their grandparents’ generation could jointly participate in political discussion and decision-making—so long as policymakers agree to bind their own decisions to the outcomes of these deliberations.

Another alternative would be more radical direct democracy. Politicians who are unmoved by electoral threats, and citizens otherwise committed to status quo policy, can sometimes be jolted into action by street protests, especially if they are sustained over long periods of time. Thunberg’s London trip coincided with widespread protests by the group Extinction Rebellion, which has adopted tactics inspired by Martin Luther King Jr. and the U.S. civil rights movement. Acts of civil disobedience brought parts of London to a halt to raise awareness of the moral urgency of the issue. Some of those taking part were very young—Extinction Rebellion has a youth wing. But others were not, including Phil Kingston, who was arrested after climbing onto the roof of a train at 83 years old.

Channeling more energy into these other forms of democracy—into citizens’ assemblies and civil disobedience, rather than elections and party-building—will change our politics drastically. But it may be the only way to ensure our planet does not change beyond recognition.

David Runciman is a politics professor at Cambridge University and the author of How Democracy Ends. This story appears in the Summer 2019 print issue.