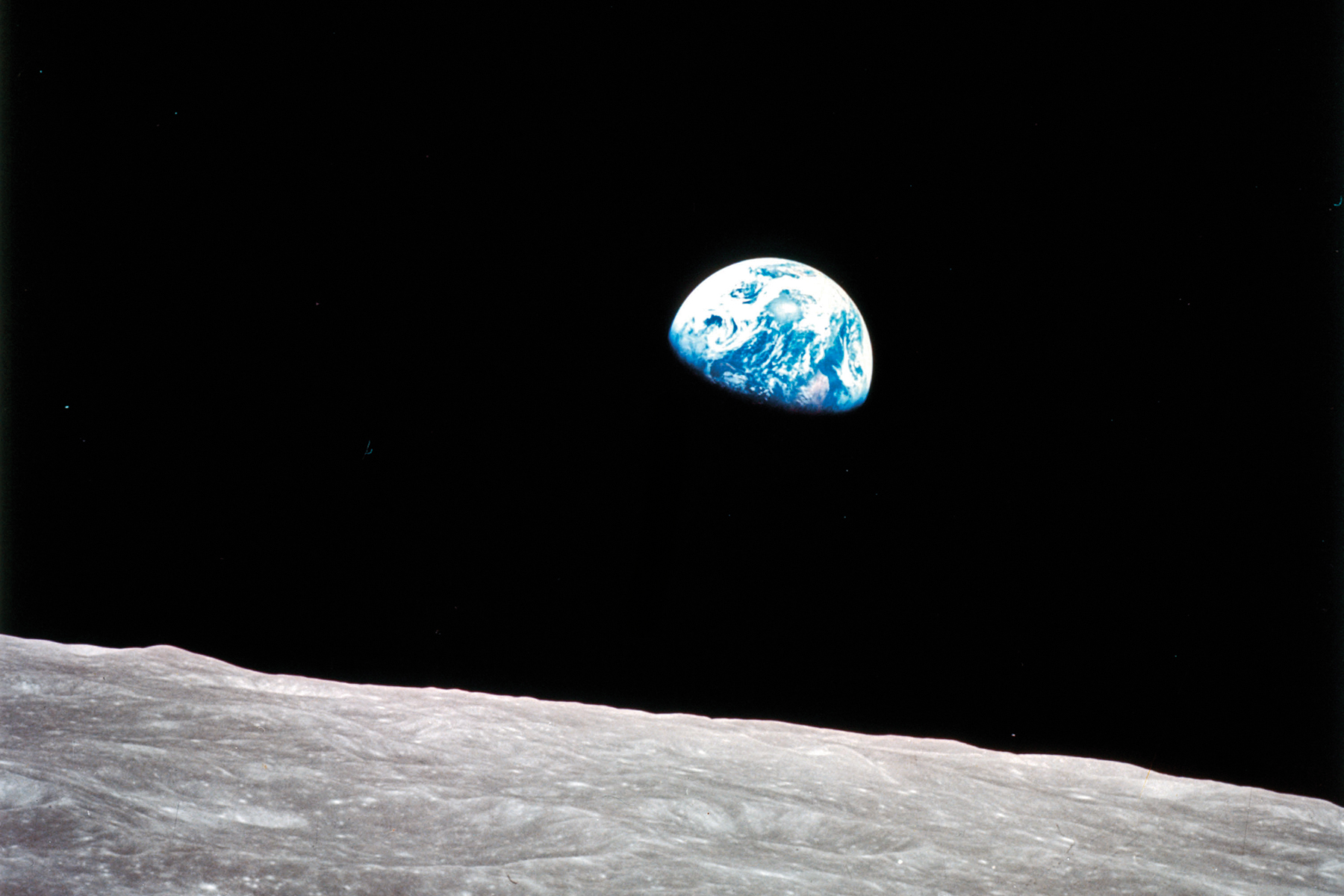 Space Research Can Save the Planet—Again

The solutions to climate change lie far, far away.

The first glimpse humanity got of the world from above was transformative. In 1968, the U.S. astronaut William Anders returned from circling the moon in Apollo 8 with a photograph. It was a simple snapshot of the Earth, the whole Earth, rising above the desolate lunar surface. But it was also momentous, representing the very first time anyone had gotten far enough away to view how fragile the world was. The contrast between the lone blue-and-green marble and the cold emptiness of space was beautiful and shocking. As Anders later remarked, “We came all this way to explore the moon, and the most important thing is that we discovered the Earth.”

Today conservationists and other critics are more likely to see space programs as militaristic splurges that squander billions of dollars better applied to solving problems on Earth. These well-meaning complaints are misguided, however. Earth’s problems—most urgently, climate change—can be solved only from space. That’s where the tools and data already being used to tackle these issues were forged and where the solutions of the future will be too.

Space research has already been critical in averting one major environmental disaster. It was NASA satellite data that revealed a frightening and growing hole in the ozone layer over the South Pole, galvanizing public concern that, in 1987, produced the Montreal Protocol: the first international agreement addressing a global environmental problem. Since then, thanks to worldwide restrictions on damaging chlorofluorocarbons, the ozone situation has stabilized, and a full planetary recovery is expected. As this case showed, space can provide the vital information needed to understand a problem—and a surprising range of ways to solve it.

Climate change is a poster child for the critical role of space data. Trekking across the globe to measure ice sheets with drills and gauge sea temperatures from the sides of ships is an expensive, slow, and insufficient way to assay the state of the planet. Satellites operated by NASA, the U.S. National Oceanic and Atmospheric Administration, and an increasing number of commercial firms provide a plethora of multispectral imaging and radar measurements of developments such as coral reef degradation, harmful plankton blooms, and polar bears negotiating thinning ice. Much of the technology involved in observing the Earth today was initially developed for probes sent to explore other planets in our solar system.

It was NASA satellite data that revealed a frightening and growing hole in the ozone layer over the South Pole, galvanizing public concern that, in 1987, produced the Montreal Protocol: the first international agreement addressing a global environmental problem.

Indeed, understanding the evolution of other planets’ climates is essential for modeling possible outcomes on Earth. NASA probes revealed how, roughly 4 billion years ago, a runaway greenhouse gas syndrome turned Venus into a hot, hellish, and uninhabitable planet of acid rain. Orbiters, landers, and rovers continue to unravel the processes that transformed a once warm and wet Mars into a frigid, dry dust ball—and scientists even to conceive of future scenarios that might terraform it back into a livable planet. Discovering other worlds’ history and imagining their future offers important visions for climate change mitigation strategies on Earth, such as mining helium from the moon itself for future clean energy.

Spinoff technologies from space research, from GPS to semiconductor solar cells, are already helping to reduce emissions; the efficiency gains of GPS-guided navigation shrink fuel expenditures on sea, land, and air by between 15 and 21 percent—a greater reduction than better engines or fuel changes have so far provided. Modern solar photovoltaic power also owes its existence to space. The first real customer for solar energy was the U.S. space program; applications such as the giant solar wings that power the International Space Station have continually driven improvements in solar cell performance, and NASA first demonstrated the value of the sun for powering communities on Earth by using solar in its own facilities.

Promisingly, space-based solar power stations could overcome the inconvenient truth that wind and solar will never get us anywhere near zero emissions because their output is inherently intermittent and there is, so far, no environmentally acceptable way to store their power at a global scale, even for one night. Orbital solar power stations, on the other hand, would continually face the sun, beaming clean power back through targeted radiation to Earth day or night, regardless of weather. They would also be free from clouds and atmospheric interference and therefore operate with many times the efficiency of current solar technology. Moving solar power generation away from Earth—already possible but held back by the current steep costs of lifting the materials into space—would preserve land and cultural resources from the blight of huge panel farms and save landfills from the growing problem of discarded old solar panels.

Sustainable energy advocates in the U.S. military and the Chinese government are actively pursuing space-based solar power, but just making solar cells damages the environment due to the caustic chemicals employed. Space technology offers the possibility of freeing the Earth’s fragile biosphere and culturally important sites from the otherwise unavoidable damage caused by manufacturing and mining.

The U.S. start-up Made in Space is currently taking the first steps toward manufacturing in orbit. The company’s fiber-optic cable, produced by machinery on the International Space Station, is orders of magnitude more efficient than anything made on Earth, where the heavy gravity creates tiny flaws in the material. Made in Space and others are eventually planning to build large structures, such as solar power stations, in space. As these technologies develop, they will augment each other, bringing costs down dramatically; space manufacturing, for instance, slashes the cost of solar installations in space.

Mining the solar system comes with its own potential impacts, but extracting resources from distant and lifeless worlds is clearly preferable to the continued degradation of the Earth.

Eventually, firms will be able to supply endeavors in space with materials from the moon and asteroids, avoiding the cost and environmental impact of lifting them into orbit. Mining the solar system comes with its own potential impacts, but extracting resources from distant and lifeless worlds is clearly preferable to the continued degradation of the Earth.

Perhaps the most powerful role space can play is as inspiration. Space tourism might seem like a frivolity for the rich, but it can be so much more. I’ve spent some time with astronauts, and they all report that seeing the Earth without borders and observing its fragile atmosphere shook them to their core, inspiring in them a powerful sense of connection and respect for the environment. As Andrew Newberg, a neuroscientist and physician who has studied this “overview effect,” put it, “You can often tell when you’re with someone who has flown in space. It’s palpable.” Subjecting thousands of the world’s wealthiest and most powerful individuals to a transcendent experience couldn’t hurt—especially if less wealthy Earthlings soon get a chance to follow them.

The leaders of the biggest space firms are already thinking way beyond tourism. Tory Bruno, the CEO of United Launch Alliance, envisions a future in which a thousand or more people work in Earth and moon orbits. These people would build stations, conduct research, and produce goods for use in space and on Earth. The Amazon mogul Jeff Bezos imagines a spacefaring civilization that keeps our home planet pristine and protected, as a sort of national park, while dirty extractive and manufacturing processes take place in orbital facilities. SpaceX’s Elon Musk wants to transform Mars back into the healthy world it once was and then fill it with life-forms from Earth—including a significant human population. Some experts have mocked this idea. But experts also lampooned Musk’s plans for reusing rocket boosters and building a high-performance electric car for the masses.

The fact is that while some of the plans described by Musk, Bezos, and others might seem utopian or hubristic, given the realities of climate change, humanity needs hope. A future that concentrates only on managing apocalypse, without offering the potential for something better, is no future at all. In the worst scenario, our precious blue-and-green marble will end up looking like its neighbors Venus or Mars simply because we chose not to learn from them.